Visit Turkey - The Center Of All Festivities 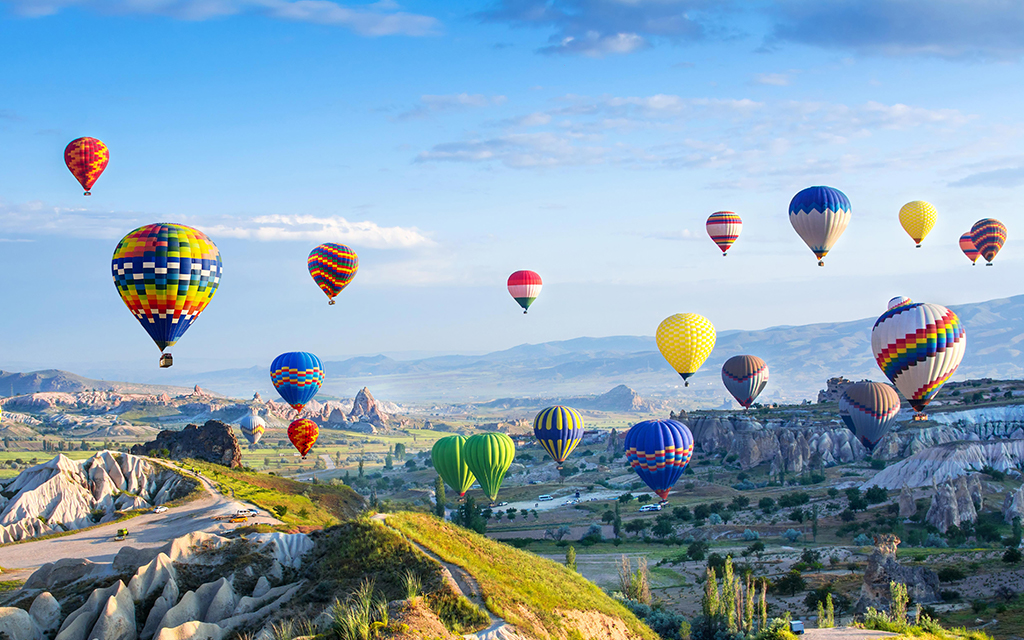 These days, individuals from all over the world are wondering how to visit Turkey.

Turkey is a stunning location that straddles both Asia and Europe.

It is filled to the brim with historic monuments that have been left over from a parade of civilizations, and it is also equipped with breathtaking landscapes that never fails to impress.

Its colorful culture, famed food, and vast history captivate those who visit, while its magnificent landscapes, ranging from the sun-drenched Mediterranean to the massive mountains and barren steppe, are tourist attractions in and of themselves. 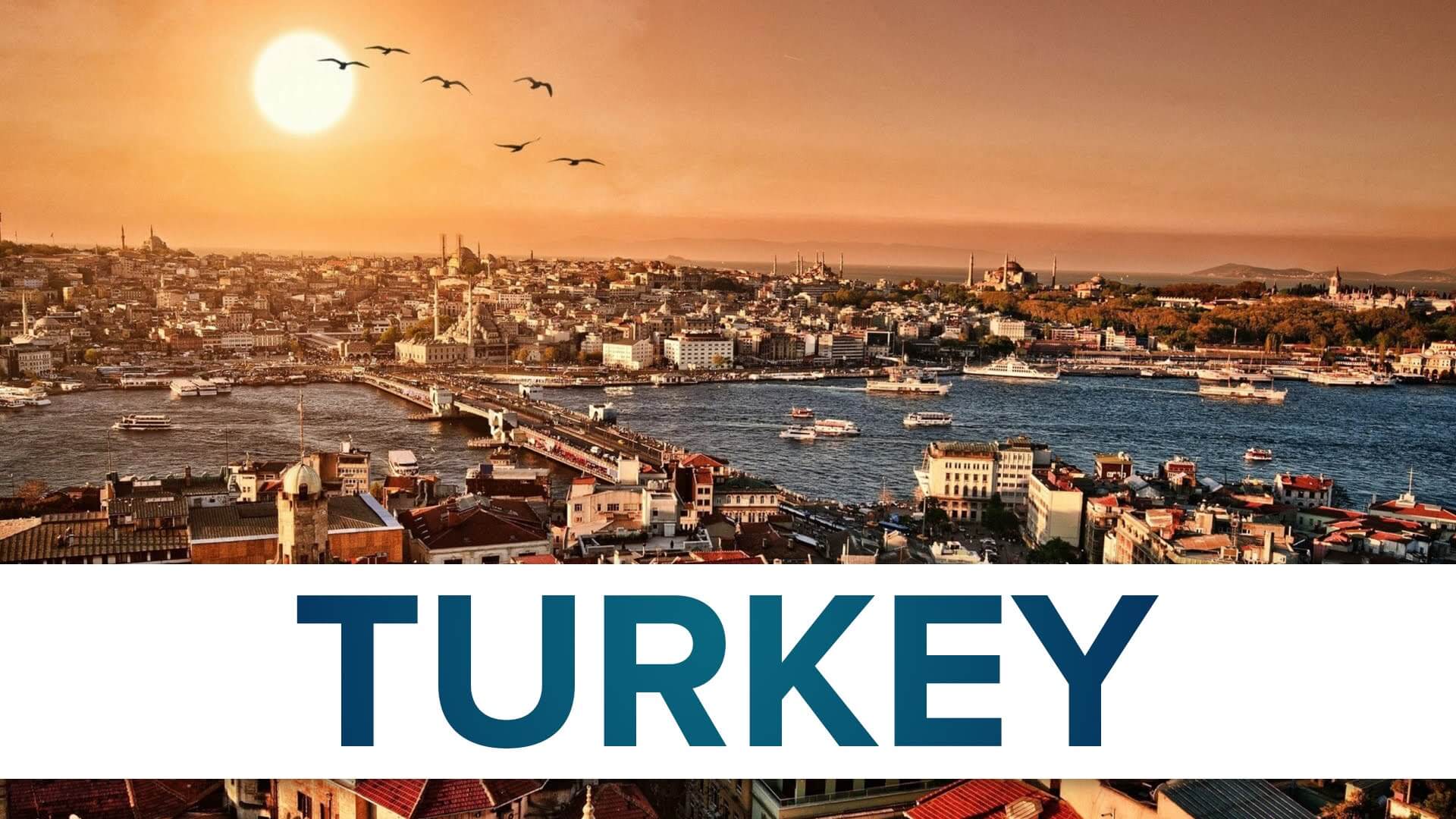 A view of a city in Turkey

Istanbul Is Located On Two Continents

Let us begin with a classic: Istanbul is located on two continents. The city is divided into two parts by the Bosporus, a strait, and so has a European and an Asian component. Overall, 95% of Turkey is in Asia, with the remaining 5% in Europe.

Turkey's Capital Is Ankara, Not Istanbul

Many people believe that Istanbul is the capital of Turkey, yet it is actually the city of Ankara that is the capital. Istanbul is simply Turkey's largest metropolis. Throughout Turkey's history, Ankara has been an important commerce center, and it has expanded to become a vital economic, art, and cultural powerhouse.

Istanbul Was Once Known As "Byzantium"

The name "Byzantium" has Greek origins and refers to Byzas, the city's founder. It was renamed "Constantinople" in 324, and Istanbul was added in 1930.

Nicholas was a Christian saint and Greek bishop of Myra born in Patara to rich parents. When his parents died, he inherited a considerable sum of money, which he distributed to the poor and needy.

According to legend, he would drop bundles of gold coins down the chimneys of houses and give fruits to children. His good works spread throughout Europe, and locals began to incorporate them into their myths and legends.

Although Turkey is known for its coffee, 96% of the population consumes at least one cup of tea every day. Turkish tea is strong and served in little tulip-shaped glasses. During your trip, make sure to sample all of their unique tea flavors.

Turkey Has A Young Demography

Turkey has the youngest population in the European Union. There are only about 9% of the country's population who are over the age of 60, and the average age in Turkey is somewhere about 31.

The City Of Istanbul Was Built On Seven Hills

Istanbul, like Rome, was built on seven hills. This was not an accident; the Byzantine Empire built the city in this manner to proclaim themselves as the new Rome. All seven hills are historically significant and are dotted with beautiful mosques and palaces.

The Term "Turquoise" Is Derived From Turkey

Turquoise is a Turkish stone. The exquisite mineral arrived in Europe from the Orient via Turkey and is one of history's earliest gemstones. Turkish warriors first used them as amulets.

Oil wrestling, often known as grease wrestling, is one of Turkey's oldest sports. When oil wrestling, the fighters douse themselves in oil before facing their opponent.

Noah's Ark Is Said To Have Landed On Mount Ararat

Many people believe Noah's biblical ark landed on the Ararat volcano. The mountain is breathtakingly gorgeous and home to amazing natural diversity. It's one of the country's highlights, so make sure to see it when you're there.

Travelers may not know much about Turkey, but the list below has some fascinating and unusual things.

For people who appreciate the beach, great dining, scuba diving, and wine, Bodrum is the ideal vacation destination. 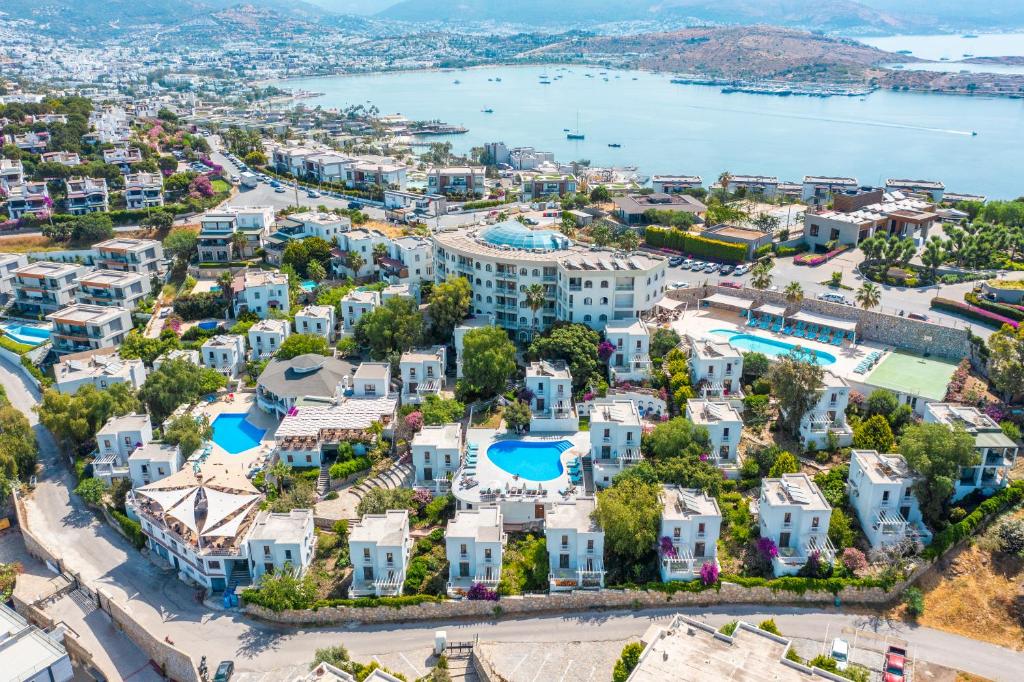 An aerial view of a beach resort in Bodrum

It is located in southwest Turkey, bordering the Aegean Sea.

This beautiful city dubbed as the Turkish Saint-Tropez is devoted to leisure and enjoyment.

While you are in Bodrum, we will undoubtedly incorporate a visit to Bodrum Castle.

It is regarded as one of Turkey's most beautiful castles, and it was built with stones from the Halicarnassus Mausoleum, one of the Seven Wonders of the Ancient World.

The Hagia Sophia Mosque (Aya Sofya), renowned as one of the most magnificent buildings in the world, is not only one of the top things to do in Istanbul, but also in Turkey.

Built by the Byzantine Emperor Justinian in 537 CE, it is regarded as the greatest architectural achievement of the Byzantine Empire and has remained the world's largest church for 1,000 years.

The massive facade is framed by elegant minarets erected after the Ottoman conquest, and the opulent and vast frescoed interior is a grand reminder of old Constantinople's majesty and power.

This famous landmark is a must-see for any visitor to the country.

The enormous ruin of Ephesus is a city of colossal monuments and marble-columned avenues that should not be overlooked. 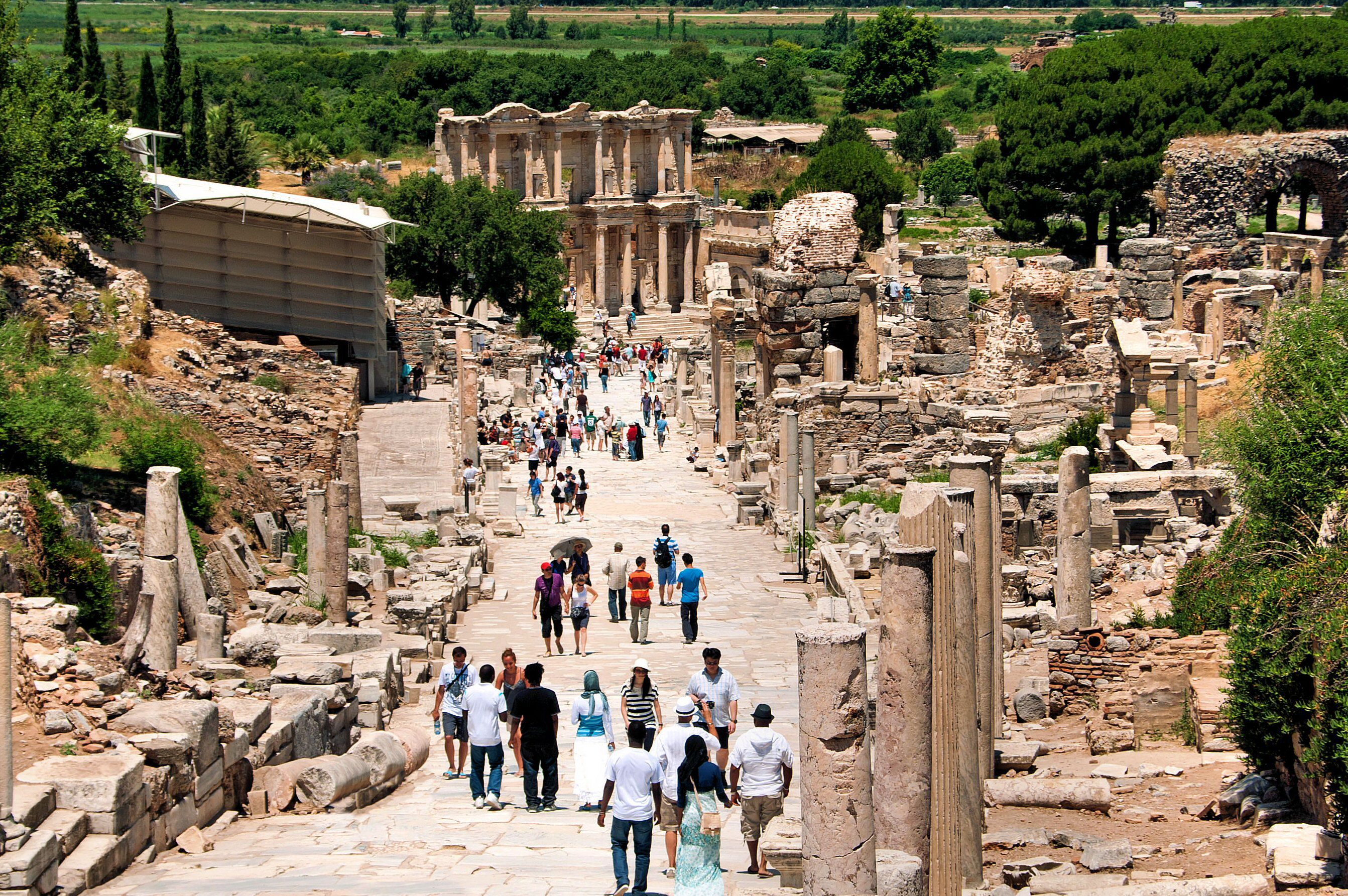 Tourists visiting the ruins of Ephesus

This is one of the most intact, still-standing famed antiquity cities in the Mediterranean region, and it is the site to experience what life must have been like during the Roman Empire's golden age.

The city's history extends back to the 10th century BCE, but the important monuments you see now are all from the Roman era, when it was a bustling trade center.

The Library of Celsus, the complex of frescoed terraced villas, and the Great Theater, in particular, attest to Ephesus' riches and influence during the Roman Empire. 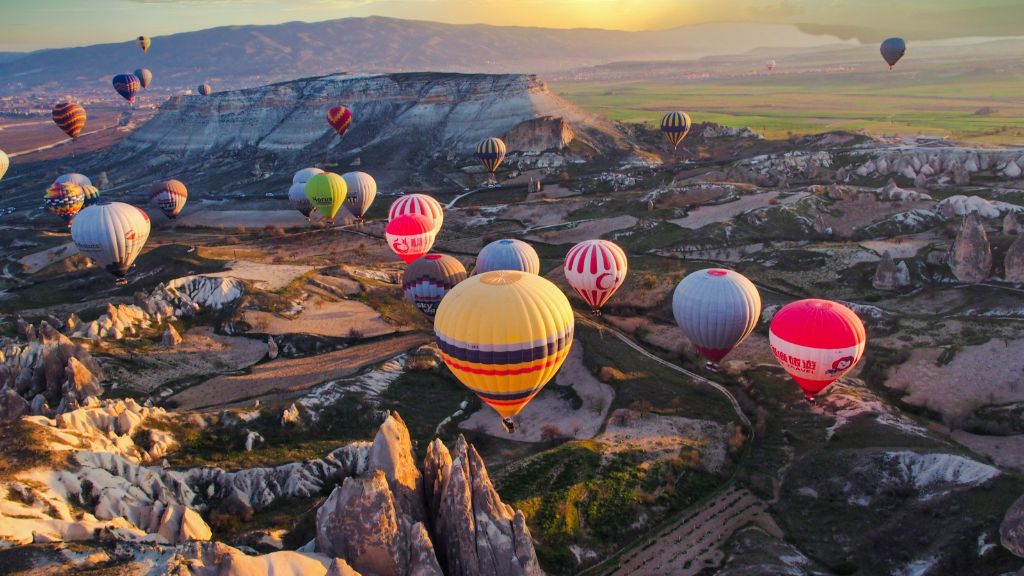 Rippling panoramas of wave-like rock or wacky-shaped pinnacles built by millennia of wind and water activity can be found on cliff ridges and hill crests.

If you don't want to hike for the sights, this is one of the best places in the world to take a hot-air balloon flight.

The frescoed rock-cut churches and cave-cut architecture of the Byzantine Era, when this area was home to monastic Christian communities, are nestled in this unusual lunar-like landscape.

Topkap Palace in Istanbul transports you to the fanciful, sumptuous world of the sultans. 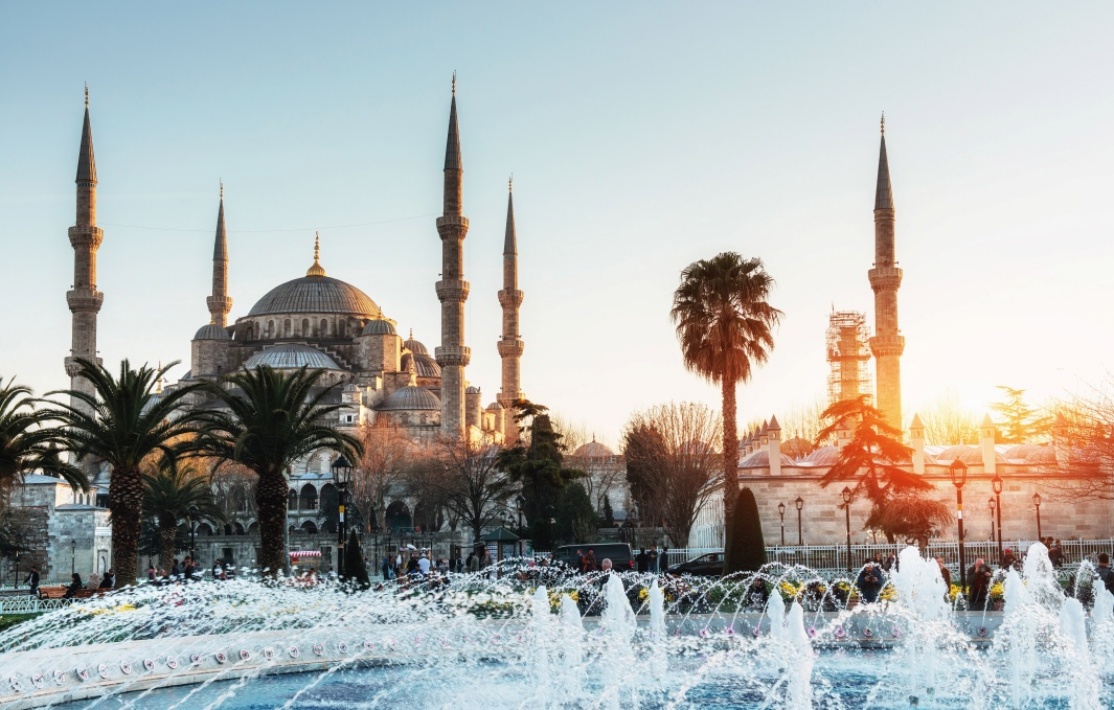 A view of the Topkapi Palace museum

During the 15th and 16th centuries, the Ottoman sultans carved out an empire that would extend up into Europe, down through the Middle East, and into Africa.

The interiors, with their decadently extravagant tiling and magnificent jeweled ornamentation, provide a breathtaking glimpse into Ottoman grandeur.

Pamukkale ("Cotton Castle" in English) is one of Turkey's most famous natural wonders, with its immaculate white travertine terraces cascading down the slope like an out-of-place snowfield amid the lush countryside. 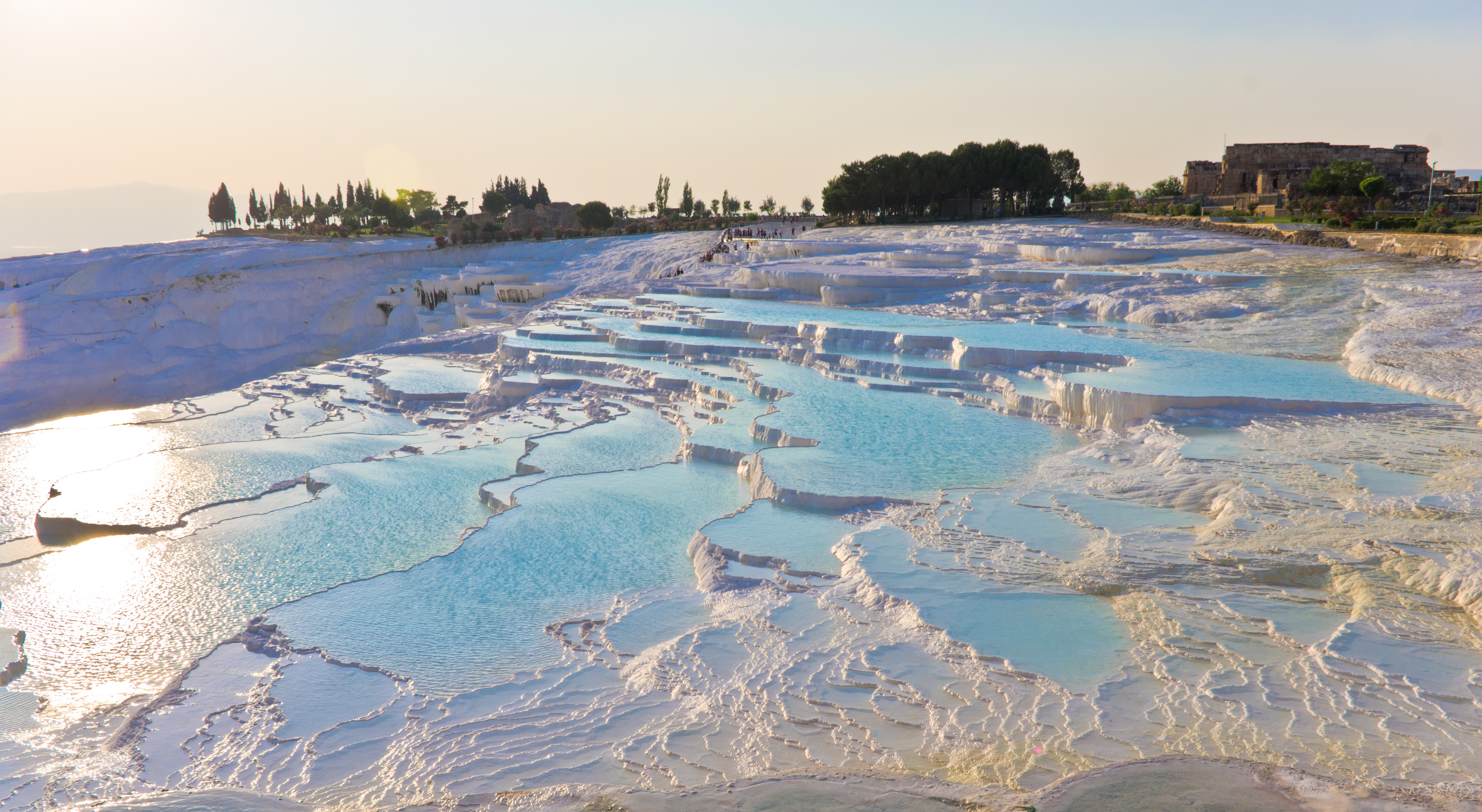 A view of Pamukkale

The huge and rambling ruins of Greco-Roman Hierapolis, an ancient spa town, sit scattered across the crest of this calcite hill, and are a highlight of any Turkey tour.

After exploring the historic theater and the relics of the city's agora, gymnasium, necropolis, and magnificent gates, you can swim in the mineral-rich waters that made this ancient spa town famous in the antique pool.

Wading through the pools of water on the higher terraces, go down the travertine hill to the small modern settlement of Pamukkale below.

This thriving Mediterranean crossroads has something for everyone. 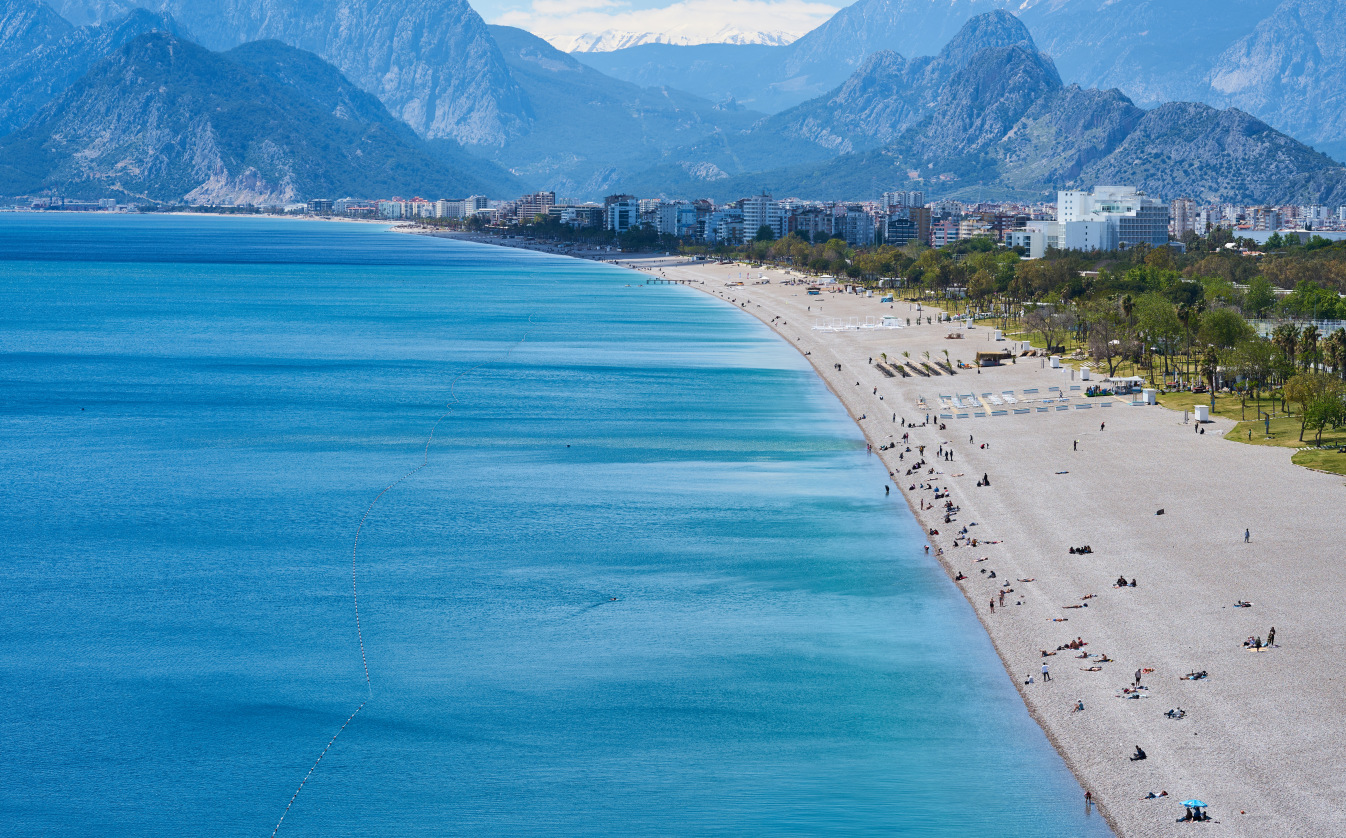 An aerial view of a beach in Antalya

In the summer, the two main beaches outside of town are sun-sloth heaven, attracting visitors from all over Europe.

While the old town district, nestled right in the middle of town, is a beautiful site to explore, with its cobblestone passageways ringed by rickety Ottoman-era homes.

The Antalya Museum is regarded as one of the best in the country, having an incredible collection of Hellenistic and Roman marble statuary, and there are several attractions outside of town for visitors who wish to utilize Antalya as a base.

Antalya, in particular, is an excellent location for day visits to some of Turkey's most famous Greco-Roman ruins, including Aspendos and Perge, which are close outside the city, and Side, which has a plethora of ruins.

There are several ruins and activities along Turkey's Mediterranean coast, but for many visitors, it's all about soaking up the sun and admiring the stunning coastal views.

A view of Turkey Mediterranean coast

For good reason, yachting is the most popular pastime for visitors visiting Bodrum and Fethiye.

The steep forest-clad slopes, secret coves with tiny white-sand beaches, and hundreds of scattered islands are ideal for maritime exploration.

Even the most ardent landlubbers will be impressed.

The Blue Cruise, which cruises from Fethiye south down the coast till disembarking near Olympus, home to the remarkable natural phenomenon of the Chimaera, is one of the most famous journeys.

Mount Nemrut's summit funerary mound is strewn with the broken remains of once-colossal statues that guarded it, making it the leading tourist attraction in eastern Turkey. 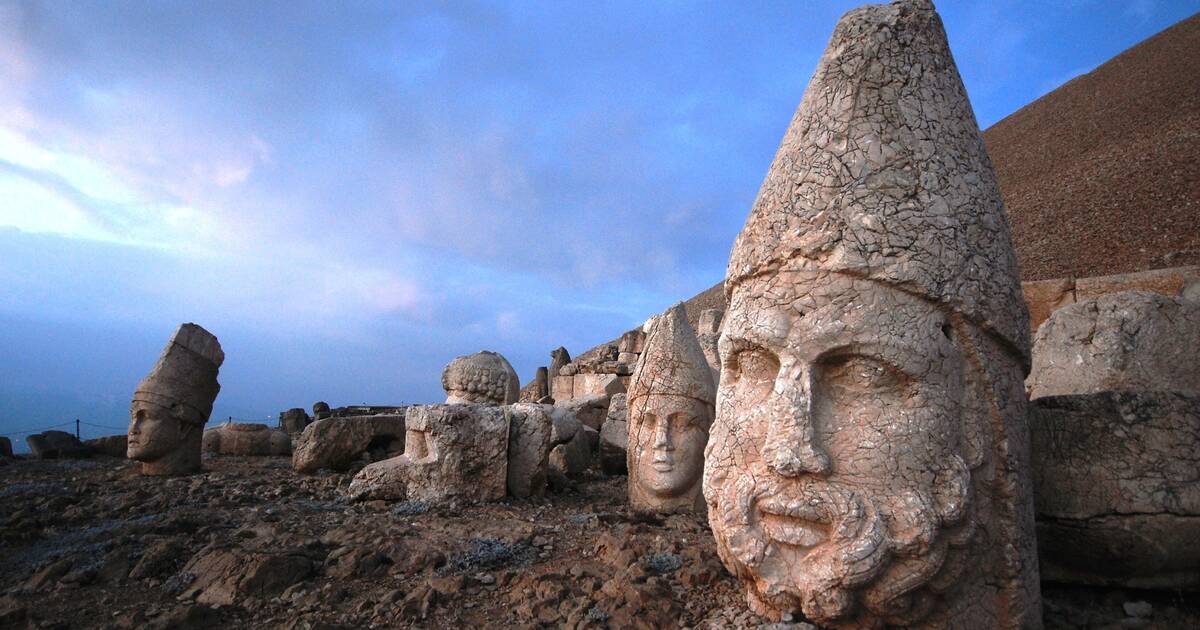 This strange and lonely location has to be one of Turkey's most unusual archaeological sites.

The peak is dominated by the massive stone heads of long-forgotten gods, generating an eerie aura over the barren mountainside.

Antiochus I, monarch of the Commagene Kingdom, which situated here in the buffer zone between the Roman and Parthian empires, built the peak.

As a display of his importance, Antiochus I dedicated this grand funerary mound to himself, raising a 50-meter-high artificial peak on Mount Nemrut's summit and then decorating it with statues of himself and various gods.

The most popular time to visit is at sunrise, when you can witness the statues emerge from the darkness.

Since it was opened to the public, the hilltop site of Göbeklitepe near Anlurfa has produced hundreds of headlines worldwide, been designated a UNESCO World Heritage site (and served as the idea for the Netflix series The Gift). 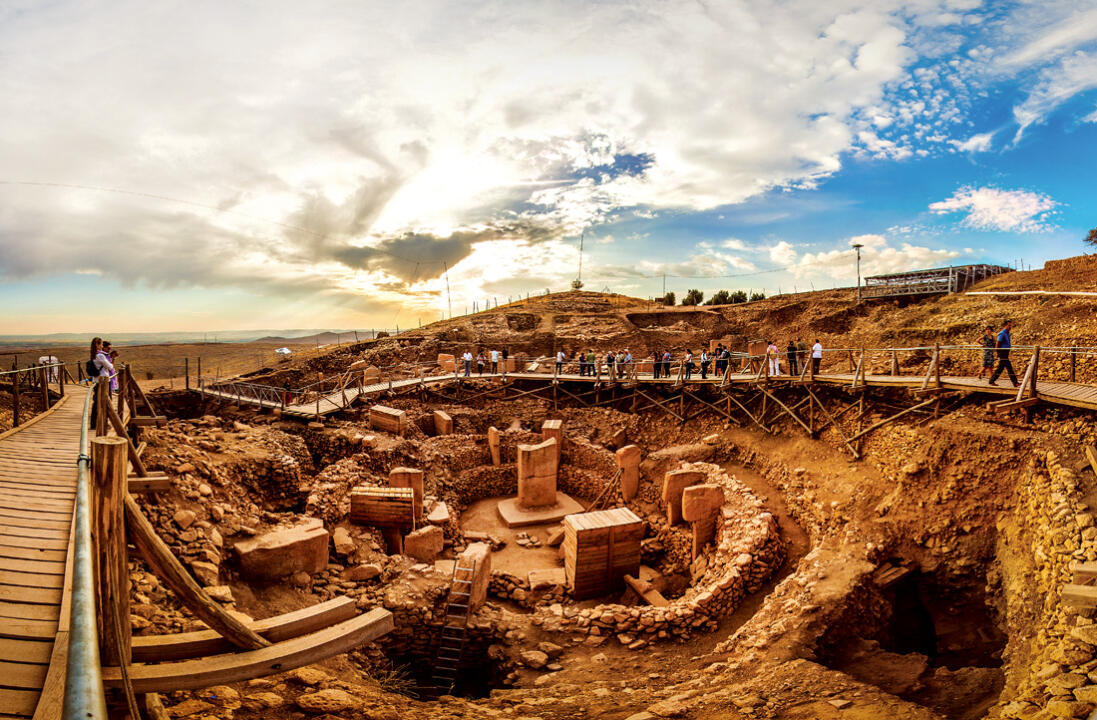 The ruins of Göbeklitepe temple

Archaeologists believe this modest site of towering T-shaped pillars etched with animal motifs and anthropomorphic characteristics originates from the pre-pottery Neolithic era and is the world's earliest sacred sanctuary.

Although it lacks the awe-inspiring quality of Turkey's many later Bronze Age and Greco-Roman historical ruins, Göbeklitepe's significance in our understanding of early human history has made it one of the most famous tourist attractions in Turkey's southeast.

Is Turkey Safe To Visit?

Terrorist attacks continue to pose a serious concern in Turkey. Tourist regions, transportation networks, shopping malls, hotels, and entertainment districts are all potential targets. Be on the lookout for potential threats, especially in public areas or large crowds. In huge crowds, stay alert and cautious.

Which Is The Best Month To Visit Turkey?

When is the best time of year to visit Turkey? Because Turkey has scorching summers and harsh winters, the ideal times to visit are in the spring and fall (April, May, and mid-September to mid-November).

Is Turkey Cheap To Travel?

Traveling in Turkey is significantly less expensive than in neighboring European nations, but it provides many of the same conveniences and privileges. However, as the currency continues to appreciate, prices will rise and many of the surprisingly amazing discounts will disappear.

However, there is a lot that both passengers and you are likely unaware of. So get ready to visit Turkey.