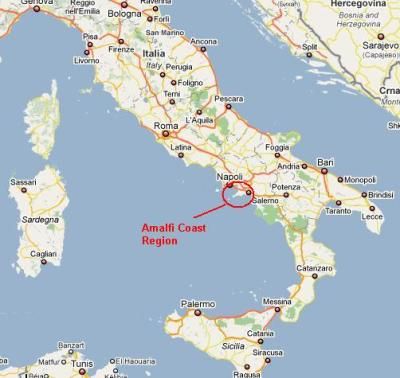 Amalfi Coast is a 50-kilometer length of coastline at the southern edge of Italy's Sorrentine Peninsula, in the Campania region, that is known for its beauty and history. Because of the towering cliffs and the craggy shoreline, which is punctuated by little beaches and pastel-colored fishing communities, this Italy coast map region is a popular tourist attraction. The coastal route that connects the port city of Salerno with the clifftop town of Sorrento runs past stately villas, terraced vineyards, and cliffside lemon gardens on its way to the clifftop town. 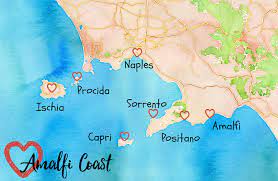 The Amalfi Coast, a UNESCO World Heritage Site since 19971, is one of the best destinations to visit in southern Italy. The Tyrrhenian Sea coast south of Naples is famed for its beaches, picturesque towns located on cliffs overlooking the sea, and as a playground for the wealthy.

The Amalfi Coast has so much to see and do, and so many fantastic places to stay, that the towns on the peninsula are ideal for a week or more.

The Amalfi Coast is no longer a secret, therefore the best months to visit are also the most popular. From mid-June to late August, the weather and crowds are at their best. April-May is ideal for trekking and sightseeing, but the sea is too chilly for swimming. From September through October, the weather is still warm enough for swimming and sunbathing, but the tourists have thinned.

November through March is a great time to visit if you desire solitude instead of a tan.

The Amalfi Coast Italy's primary language is Italian. Most hotel, restaurant, and store staff speak English. To be courteous, it's best to learn a few Italian phrases. 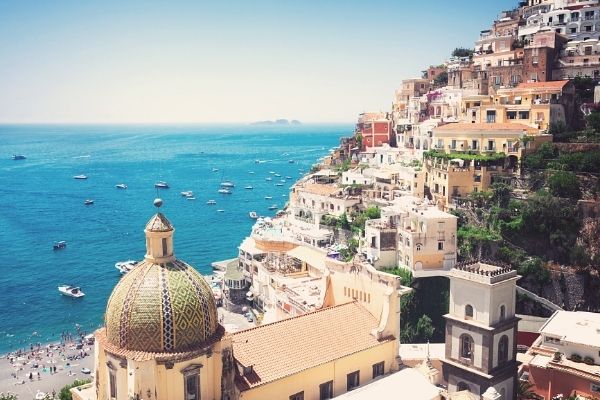 An angular Positano city Italy near the sea

There is something for everyone on the Amalfi Coast, from beach-going to shopping to hiking to sightseeing in its many unique villages and ancient monuments. While you're here, enjoy a gorgeous boat trip, even if it's simply a ferry between towns. It's a joy to see the coast from the ocean, with its spectacular cliffs, secluded beaches, and pastel-colored settlements.

Get up early to photograph the Amalfi Coast's towns and beaches.

The Amalfi Italy Coast map road connects the major towns along the coast.

Many visitors choose to drive this road. Due to the heavy summer traffic, hairpin corners, and dramatic drop-offs from the side of the road, we recommend driving the coastal road in the off-season. Getting between towns is possible via water taxi or ferry, private driver (or hotel shuttle), or the slow-moving municipal buses that travel the coast route.

Why Is The Amalfi Coast So Famous?

When it comes to liqueurs, the Amalfi Coast is most renowned for the manufacturing of its limoncello liqueur, which is created from lemon (known in Italian as sfumato Amalfitano) that is grown in terraced gardens along the entire coastline from February to October.

The West coast of Italy includes some lovely old cities a little further inland – such as Genoa, Lucca, Florence, and Pisa – as well as the car-free and heavily walked Cinque Terre coastal walking route, cute little beach resorts such as Moneglia, and the lengthy, heavily privatized Versilia Coast that stretches from Forte Dei Marmi down to Viareggio.

Everything from the stunning cliffside vistas of Positano to the magnificent palaces of Ravello is surrounded by pastel hillside villages and blue shallows. Not to mention some of the tastiest seafood you'll ever have the pleasure of tasting in the Italy coast map region.