Where Is Puglia Italy? - Discover The Bread Basket Of Italy 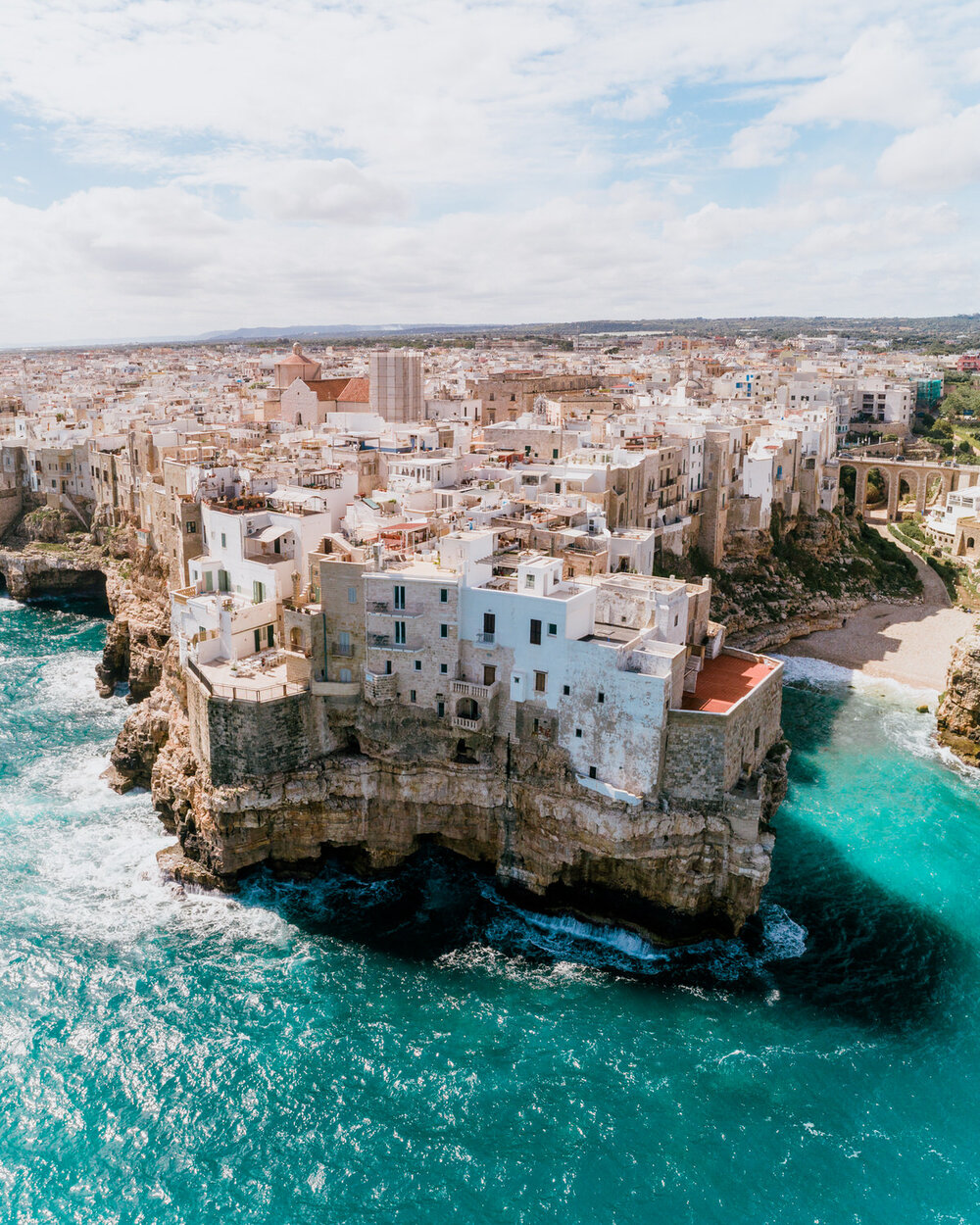 Where is Puglia Italy? If you are wondering where this awesome place is, then you came to the right place.

When you visit Puglia, you will experience a vibrant culture and a rich history unlike any other.

It is located on the heel of the Italian 'boot' and is sometimes neglected for more prominent tourist destinations. Its fascinating charm, on the other hand, should not be overlooked.

Puglia boasts some of the most incredible sights in Italy, from the incredible wine and delicacies to the spectacular terrain, where the myriad of green fields contrast with the brilliant blue of the sea!

Puglia, often known as Apulia, is a region in southeastern Italy. It is an Italian peninsular area that borders the Adriatic Sea to the east, the Ionian Sea to the southeast, and the Strait of Otranto and Gulf of Taranto to the south.

The region covers 19,345 square kilometers (7,469 square miles) and has a population of over four million people.

It is bounded to the north by Molise, to the west by Campania, and to the southwest by Basilicata. Its capital city is Bari.

Puglia, often known as Apulia stretches from the Fortore River in the northwest to the Salentine Peninsula's tip (the "heel" of Italy), and includes the provinces of Bari, Barletta-Andria-Trani, Brindisi, Foggia, Lecce, and Taranto.

The Puglia Tableland dominates the northern third of the territory, which is bounded on the north by the limestone massif of Gargano Promontory (the peninsula's "spur") and on the west by the Neapolitan Apennines.

The low Murge plateau occupies the central third, gradually sloping to the narrow coastal plains of the Adriatic Sea in the east. The Salentine Peninsula consists of the lowlands of Lecce, Taranto, and Brindisi, as well as low plateaus east and south of Taranto.

Except for the shoreline, which is usually low and sandy, the predominant geological material of Puglia is limestone. The Fortore and Ofanto rivers are the main major rivers, both in the north, but there are several springs.

The lack of surface water across wide areas prompted the construction of the Apulian Aqueduct (1906–39), the largest of its kind in Italy, which brings water from the Sele River on the western slope of the Apennine watershed to the region.

How To Get To Puglia, Italy?

A good road trip anywhere requires equal parts planning and spontaneity. A certain amount of planning before stepping in your rental is essential, but flexibility to turn and follow your gut instinct is also crucial.

Making arrangements and following the open road is made simple in Puglia. Here's the lowdown on what makes Puglia a year-round road-trip destination, as well as a thorough itinerary to get you started.

Puglia is served by two major airports: Bari and Brindisi. When booking a rental automobile, you'll be given the option of manual or automatic gearbox, with the former usually being less expensive.

If given the option, choose a smaller vehicle to make squeezing by other vehicles on narrow highways less stressful.

Top 5 Things To Do In Puglia

Puglia's scenery range from wide stretches of olive groves and vineyards to gorgeous beaches and isolated coves on the Adriatic and Ionian coastlines.

With its rich culinary tradition, whitewashed rural villages studded with trulli houses, and cities with magnificently preserved Romanesque, Gothic, and Baroque architecture, it's no surprise that this previously unexplored region at the heel of Italy's boot is now firmly on traveller radars.

A trullo or trulli is a traditional dry stone cottage with a conical roof in Apulia. Their building type is unique to the Itria Valley in the Murge region of the Italian region of Apulia.

Trulli were typically built by small proprietors or agricultural laborers as temporary field shelters and storehouses or as permanent residences. Whole sections in the town of Alberobello, in the province of Bari, are densely packed with trulli.

The nineteenth century was the golden age of trulli, particularly in its last decades, which were defined by the development of wine producing.

Bari, the second-largest city in southern Italy after Naples, is an excellent starting place for a vacation to Puglia. Its Old Town, Citta Vecchia, is particularly interesting.

Wander through the maze of little alleys and soak in the ambiance of the two main squares, Piazza del Ferrarese and Piazza Mercantile, which are filled with bustling cafés, bars, and restaurants.

Polignano a Mare, which situated atop a high cliff overlooking the Adriatic Sea, is a great place to unwind and soak up some Puglian sunlight for a day or two.

Cool down in the calm, clear water at Lama Monachile, a white-pebble beach within a rocky cove bounded by a Roman-era bridge, or stroll through the old town to the main square (Piazza Vittorio Emanuele) for a coffee at one of the delightful cafés.

In the evening, take a stroll across to Pietra Piatta or Balconata sur Mare for spectacular sunset views.

The Castellana Caves (found in 1938) are a karst cave system in the province of Bari and one of Italy's most beautiful natural wonders.

The extended tour includes a stop at the Grotta Bianca (White Cave), a shining alabaster cavern that is considered the highlight of the Castellana Caves.

Gargano National Park in northern Puglia is shaped like the tip of an Italian boot protruding out into the Adriatic Sea.

It has an astonishing variety of scenery within a relatively tight area, ranging from a harsh mountainous interior to Aleppo pine woods and a mix of sandy and pebble beaches - ideal for trekking, cycling, and swimming.

Aside from the peaceful nature, there are a few postcard-worthy settlements, such Monte Sant'Angelo (in the Alps) and Peschici (by the coast).

Meanwhile, the Tremiti Islands, located 22 kilometers (14 miles) from the mainland, are alive with marine life and provide for excellent snorkeling and scuba diving.

What Is Puglia Best Known For?

Puglia is well-known for producing olive oil. The region produces around 40% of the country's olive oil, which amounts to approximately 300,000 tonnes per year!

Is Puglia Italy Worth Visiting?

This lovely location in Italy's south-east is well worth a visit. That gorgeous section of Italy is not well known, but it is growing increasingly popular, particularly in the summer. The blue ocean and beautiful beaches are quickly becoming Europe's final summer paradise.

What Is The Best Time To Visit Puglia?

The climate in Puglia is Mediterranean, with hot, dry summers and pleasant winters. If you prefer bright, sunny days, the ideal months to visit Puglia are July and August. July is the hottest month of the year, with average daily highs of 30 degrees Celsius and lows of 24 degrees Celsius.

Puglia may not boast as many world-famous attractions as Tuscany or Rome, but the heel of Italy is a more gratifying destination to visit in many ways. For one thing, it's far less touristic. You can explore its hilltop towns, castles, clifftop villages, beaches, and olive orchards in peace and quiet if you visit outside of the high summer months.