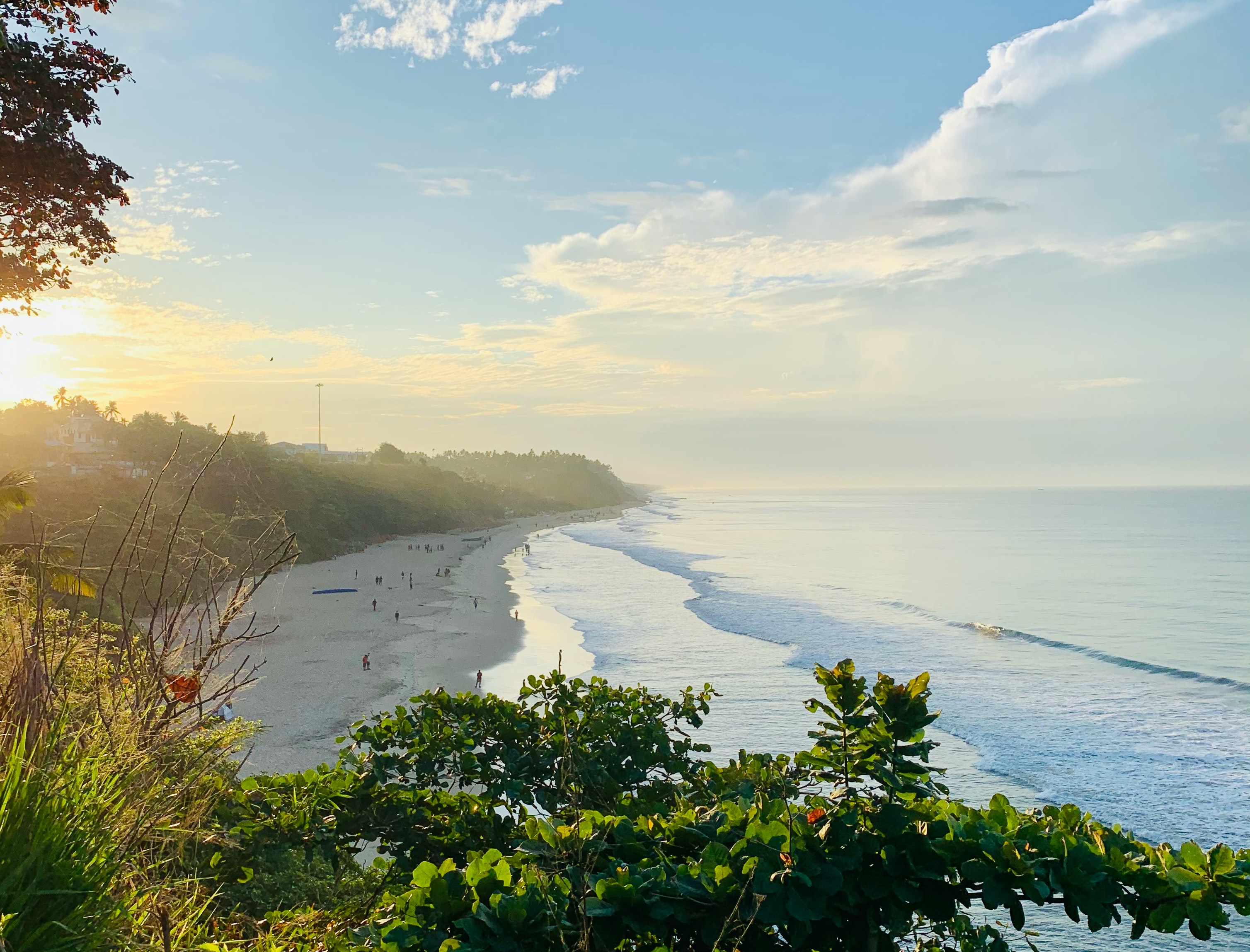 Varkala is a quiet and peaceful village located on the border of Thiruvananthapuram district, 51 km north of Thiruvananthapuram city of Travancorepuram district and 37 km south of Kollam in South Kerala. A magnificent beach, the 2,000-year-old Vishnu Temple, and the Ashram-Shivagiri Monastery, a short distance from the coast, are the center of attraction for tourists.

You can find natural springs at Papanasam Beach (also known as Varkala Beach India), 10 km from Varkala. It is believed to have healing and healing effects. The term "Papanasam Beach" comes from the belief that a dip in the sacred waters of this beach can cleanse the body of uncleanness and the soul from all sins.

Janardhan Swami Temple, a 2,000-year-old temple overlooking the sea on rocks, is a short distance away. Nearby is Shivagiri Monastery, founded by Sri Narayan Guru (1856–1928), a famous religious reformer and philosopher. During the Shivagiri Yatra, which lasts from December 30 to January 1, thousands of devotees visit the Guru's Samadhi (final resting place) here each year.

Varkala has many tourist attractions and is quickly becoming a popular health resort due to its many Ayurvedic treatment centers.

There are many attractions in the area. The beaches, mineral springs, Shivagiri monastery, and the 2000-year-old Vishnu temple are the main attractions.

Varkala Beach is the only place in southern Kerala where there are rocks along the Arabian Sea. These rocks are forms of sedimentary sediments and geologists call them the Varkala formation. They are geological monuments registered by the Geological Survey of India. On the edges of these cliffs, there are water spouts and saunas. 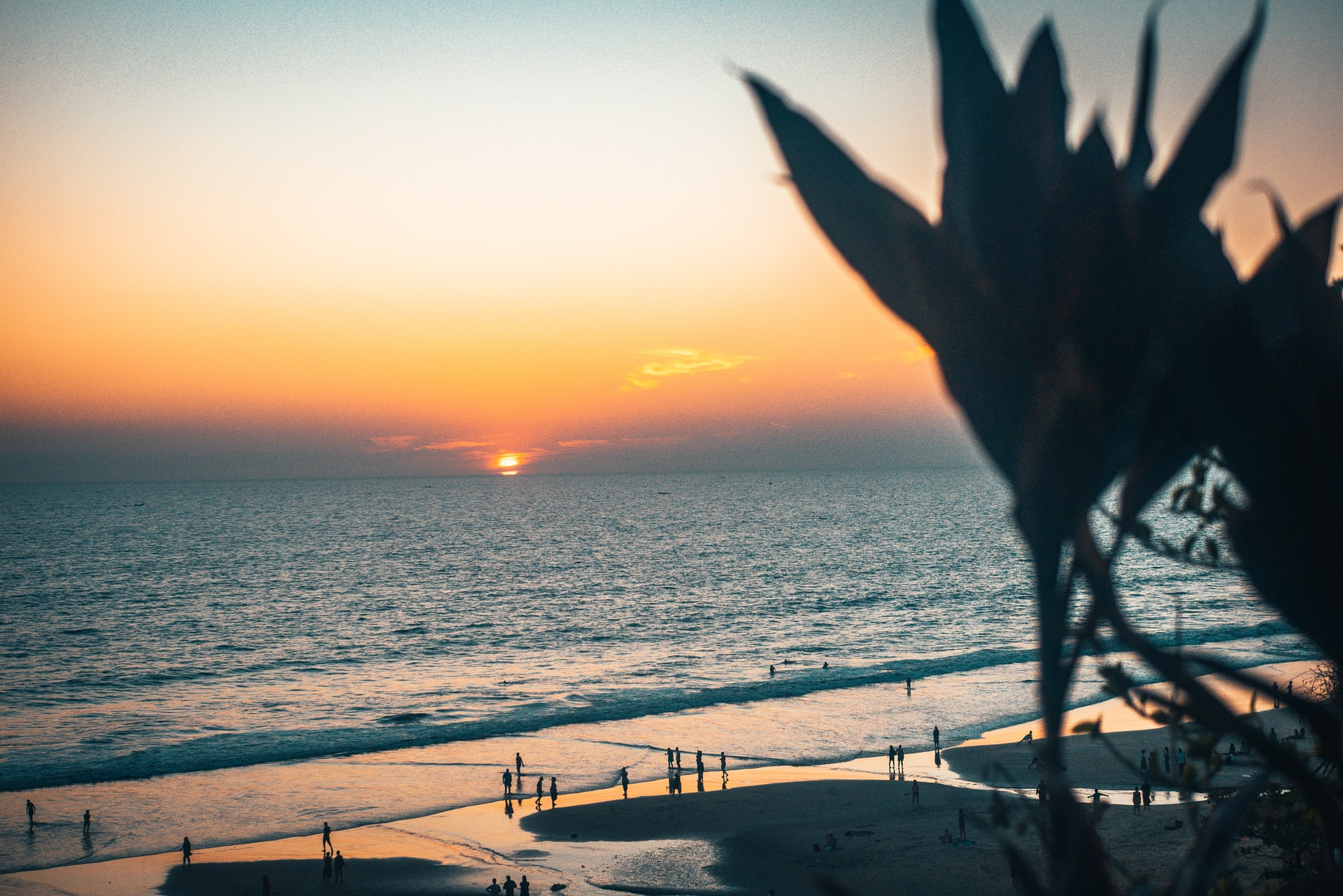 Close to the beach lies the Janardana Swami Temple. Arattu, a 10-day event celebrated twice a year, is well-known.

Another interesting site is the Sivagiri Mutt, which is located atop the Sivagiri hill. Varkala Sivagiri Railway Station offers a train service.

Boating, parasailing, jetting, and horseback riding are among the adventure and leisure activities available at Varkala Beach. Restaurants and cafés are also available, although no alcohol is offered.

The rainy season in Varkala is gloomy, the dry season is partly cloudy, and the weather is hot and uncomfortable all year. The temperature normally ranges from 74°F to 90°F throughout the year, with temperatures seldom falling below 71°F or rising over 93°F.

According to the beach/pool score, the ideal time to visit Varkala for hot-weather activities is from mid-December to early March.

Clear, rainless days with perceived temperatures of between 75°F and 90°F favor the beach/pool score. According to this score, the optimum time to visit Varkala for hot-weather activities is from mid-December to early March, with a peak score in the final week of January.

Varkala Beach India Things To Do

Varkala Beach's beautiful sand is suitable for a traditional beach vacation, and it offers a wide range of thrilling activities for all types of visitors. These are some of the other things you can do while you're in this beautiful place:

Varkala Beach is a popular vacation spot for many people due to its attractive appearance. A lot of fantastic resorts and hotels have emerged in and around the area to meet the demand.

1. Because this is a sacred village, alcohol is not served in shacks.

2. Power outages are common, so bring a flashlight with you.

3. Do not swim too far from the shore and be aware of strong currents.

Varkala has several notable restaurants serving delectable cuisines ranging from South Indian to Continental, Italian, and Chinese. Vegetarians need not fret because Jicky's Rooms, Oottupura Vegetarian Restaurant, and Hotel Suprabhatham all serve vegetarian meals. The Taj Garden Retreat's restaurant serves delectable cuisine. Café del Mar, on the other hand, serves delectable Indian, Italian, and Mexican cuisine. If you're near a train station, the Varkala Park Hotel is a good option. There are various beach shacks where you can hang out with your pals, such as Dolphin Bay and Funky Art Café.

During your vacation, there are a few important attractions that you should not miss. These are the ones:

This is a well-known temple in the area that is devoted to Lord Vishnu. It is a 2000-year-old temple where festivals are celebrated with vigor. It is one of the most important locations for paying honor to the ancestors.

This ashram, 2.5 kilometers from Varkala, is devoted to Sree Narayana Guru, who advocated for equality and was always in support of one religion, caste, and deity for mankind.

The picturesque Papanasham Beach is a famous tourist destination with its white sand beach, golden sunsets, pure seas, and towering cliffs. It's also an important heritage hub with a wealth of historical significance. The freshwater spring near the seashore may be seen from the bluff. Bathing is significant over here since it is thought that it will cleanse you of all your sins.

This place, located 15 kilometers south of Varkala, has a long history of British rule.

This tunnel, built by the regional lords of Attingal Palace, leads to a canal that continues down the side of Sivagiri Mutt.

How To Reach Varkala Beach India

Varkala is in Kerala's state of Kerala, and it is well linked to Thiruvananthapuram. Thiruvananthapuram, in turn, is accessible by road, train, and air from all major Indian cities. Varkala is a popular tourist destination all year round. Varkala can be reached in the following ways:

Thiruvananthapuram, the nearest airport, is 45 kilometers from the coastal town. Every day, it serves about 40 international and domestic aircraft and over a thousand people. Thiruvananthapuram is connected by air to several major Indian cities, including Delhi, Mumbai, Kochi (Cochin), Chennai, Bengaluru, and Hyderabad. It also has flights to several Middle Eastern locations. Pre-paid taxis are available from the airport to Varkala.

The KSRTC, which is managed by the state government, runs buses from Thiruvananthapuram regularly. Tourists traveling from Kochi can take a bus to Thiruvananthapuram and then change buses at Attingal to Varkala. Buses might become overcrowded, making the ride a little tiresome.

Why Is Varkala Beach Famous?

Its seashore is well-known for its natural springs, which are considered to have therapeutic properties. The Sivagiri Mutt and the 2000-year-old Janardhanaswamy Temple draw a regular stream of visitors throughout the year. Many Ayurveda centers have also opened in the region, adding to the area's attraction.

Though I cannot answer for safety, travelers in Kerala are typically safe. Many Indians continue to be fascinated by outsiders. As a result, you may expect some attention, but it won't be intrusive.

Varkala Beach India is well-known for its spas, mineral springs, and ayurvedic facilities, all of which provide the greatest treatments and therapies. The cliff-clad beaches and colorful surroundings create a happy atmosphere that draws beach lovers and honeymooners to spend their vacations here.

The cliff's edge gives stunning views of the sand and water. Varkala is a great place to visit for a vacation because it has so many attractions that draw visitors from all over the world. At well-known Ayurvedic massage clinics in Varkala, you can relax and renew your senses in a beautiful setting while getting a good massage.