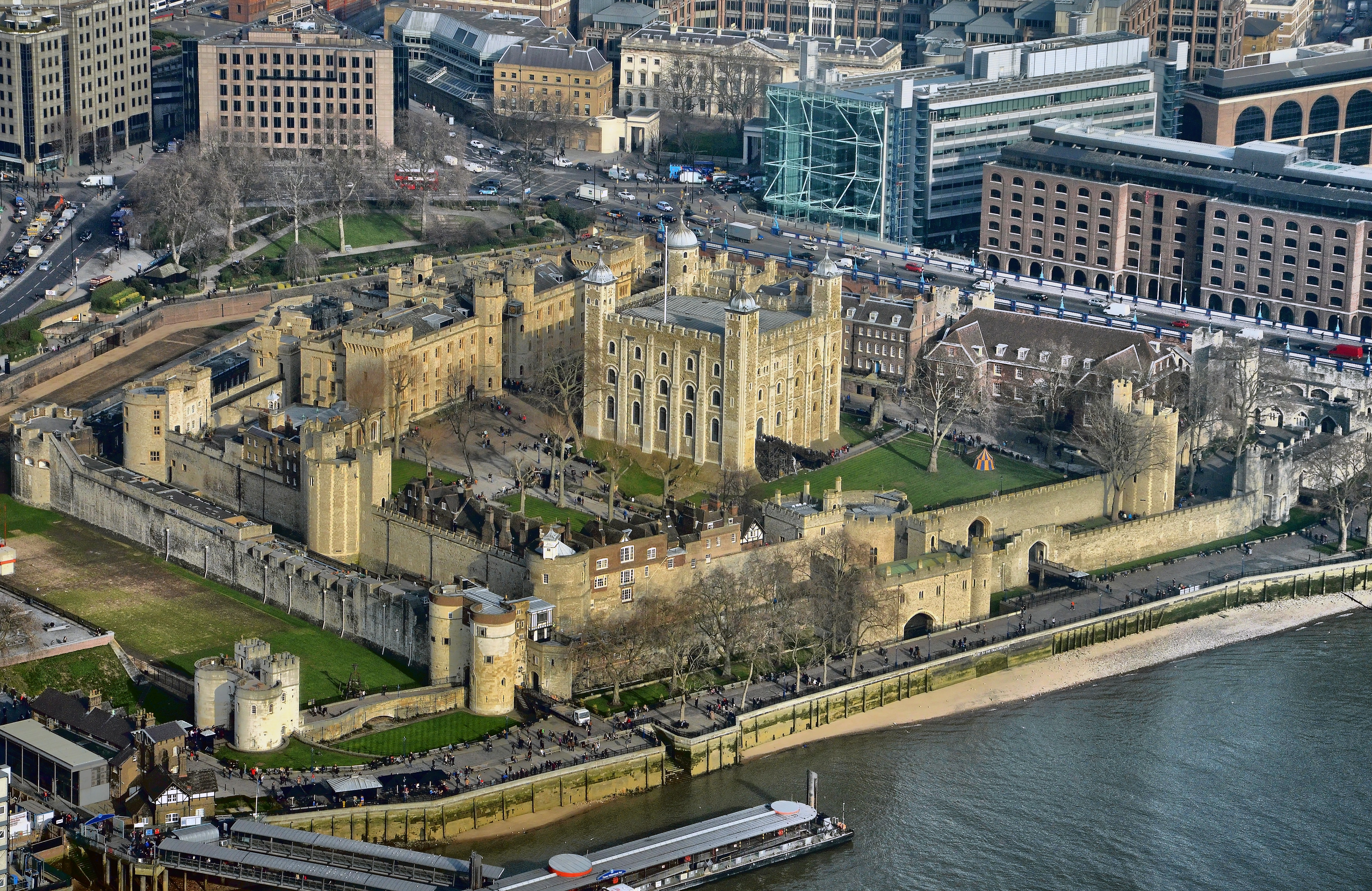 If you are looking at Tower of London pictures, you would definitely agree how stunning and mysterious this place is.

Her Majesty's Royal Palace and Fortress of the Tower of London is not only the most important complex of structures in the United Kingdom, but it is also the most frequented of the city's many tourist attractions.

Its structures and grounds were a royal palace, political prison, execution site, arsenal, royal mint, menagerie, and public records office. It's on the north bank of the Thames, in western Tower Hamlets, near the City of London.

William I the Conqueror began building defenses on the site following his coronation (Christmas 1066) to dominate the local mercantile community and control access to the Upper Pool of London, the primary port before the 19th-century docks.

The principal stronghold, called the White Tower, was erected of Caen, Normandy, limestone in 1078. The White Tower became the nucleus of a set of concentric defenses enclosing an inner and outer ward in the 12th and 13th centuries.

From the 13th century till 1834, the Tower hosted the Royal Menagerie (the Lion Tower). In the Middle Ages, the Tower of London was a jail and place of execution for politically linked offenses.

Most captives were killed on Tower Green or, outside the castle, on Tower Hill.

During WWI, spies were executed there. Princess Elizabeth (later Elizabeth I), who was imprisoned by Mary I for conspiracy, Guy Fawkes, Sir Walter Raleigh, and Sir Roger Casement were among detainees. Edward V and his brother were last seen in the Tower in 1483 before their disappearance and probably murder.

Until 1994, the British crown jewels and regalia were kept in the underground Jewel House. The medieval rooms in Wakefield and St. Thomas' towers were restored in the 1990s.

The Tower of London is a historic castle on the north bank of the Thames in downtown London. It's in Tower Hamlets, which is separated from the City of London by Tower Hill. 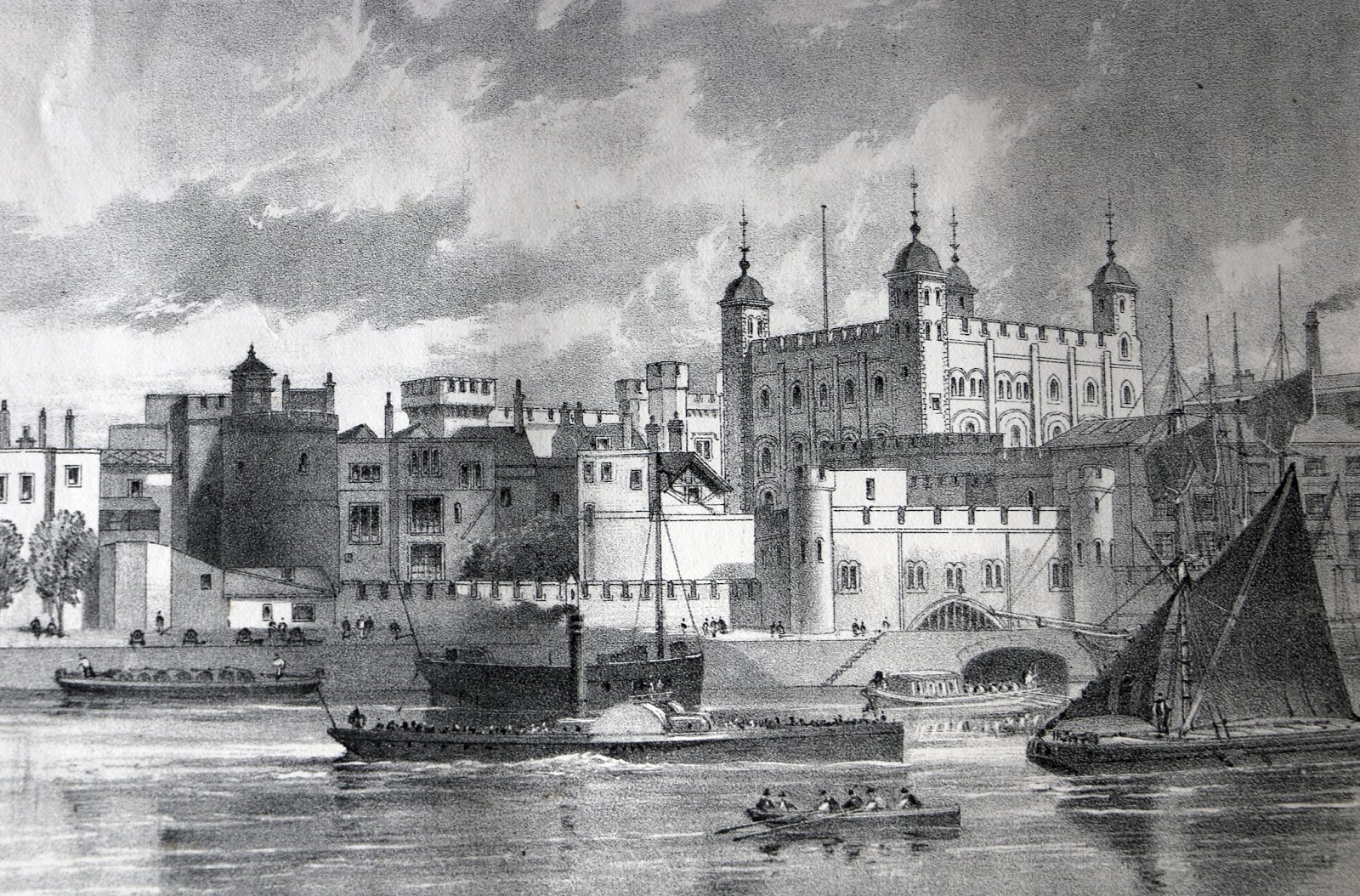 A depiction of the past of Tower of London

In 1066, during the Norman Conquest, it was founded. William the Conqueror built the White Tower in 1078 as a symbol of oppression inflicted on London by the new ruling elite.

From 1100 (Ranulf Flambard) to 1952 (Kray brothers), the castle was also a prison. It was once a royal palace. The Tower is a cluster of structures surrounded by walls and a moat. In the 12th and 13th centuries, Richard I, Henry III, and Edward I expanded. The 13th-century layout survives despite further development.

The Tower of London is important to English history. It was besieged multiple times, and conquering it meant dominating the country. The Tower has been an armoury, a treasury, a menagerie, the Royal Mint's house, and the Crown Jewels' home.

From the early 14th century until Charles II's reign in the 17th century, coronations were held at Westminster Abbey. In the monarch's absence, the Tower Constable runs the castle.

Medieval kings trusted this position. In the late 15th century, the Princes in the Tower disappeared, thought slain. Under the Tudors, the Tower was utilized less as a royal residence, and its defenses fell behind artillery improvements.

Elizabeth I before she became queen, Sir Walter Raleigh, and Elizabeth Throckmorton were confined in the castle during the 16th and 17th centuries. "Sent to the Tower" comes from this expression.

Only seven persons were executed in the Tower before the World Wars of the 20th century, despite its reputation as a place of torture and death. 112 executions occurred on Tower Hill north of the castle during 400 years.

In the 19th century, institutions like the Royal Mint left the castle, leaving several structures unoccupied. Anthony Salvin and John Taylor restored the Tower to its medieval appearance by removing post-medieval buildings.

During the First and Second World Wars, 12 spies were executed in the Tower. After WWII, the Blitz-damaged castle reopened to the public. The Tower of London is a renowned tourist spot.

Historic Royal Palaces cares for the site, which is a World Heritage Site and under the ceremonial charge of the Constable of the Tower and Resident Governor of the Tower of London and Keeper of the Jewel House.

The Tower of London is a stronghold in the centre of London, the capital of the United Kingdom. 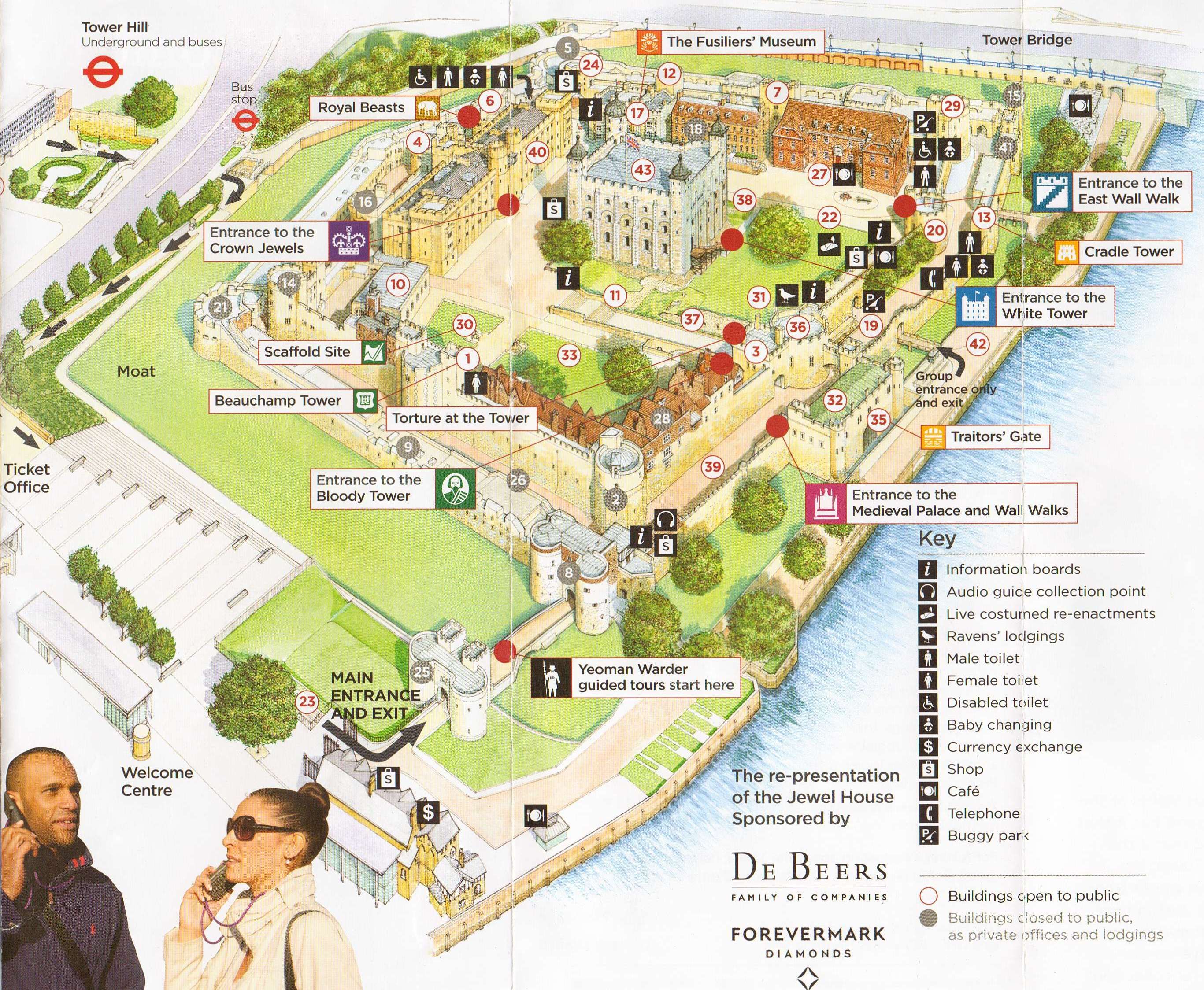 A detailed map of Tower Of London

It was an important stronghold in the defense of British land as a whole, commanding the passage of ships on the Thames as well as the city.

Those who possessed this castle were the masters of the British Isles; it was a really significant fortification, with a history that matches its global fame.

In actuality, it is a tower, the well-known white tower, surrounded by two concentric ramparts that form an uneven hexagon. The interior of the first rampart is densely packed with structures, producing a mini-town in its own right.

The White Tower And The Line Of Kings

The White Tower, located in the Inner Ward and named after the white stone used in its construction, was begun in 1078 and completed around 1100. 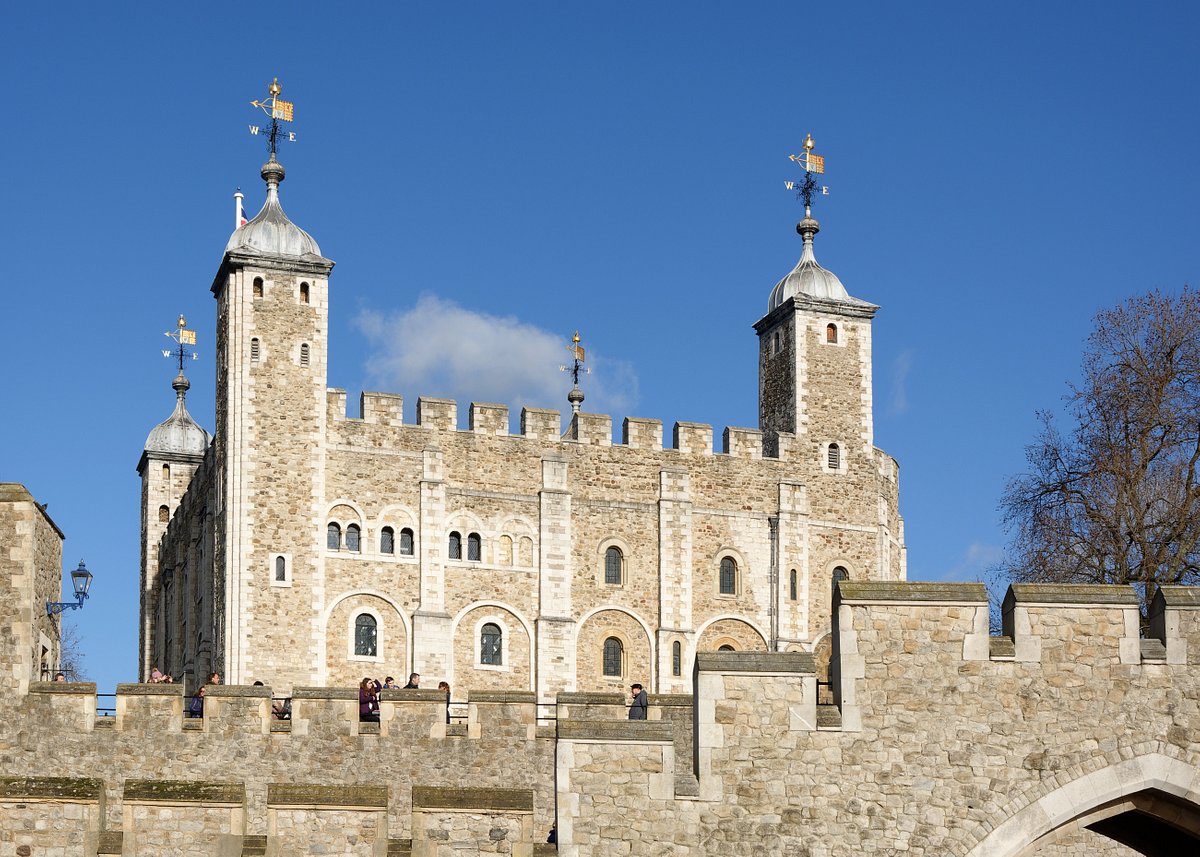 Some tourists in Tower of London White

The four-story structure contains miniature cupolas on the corner turrets and walls up to 15 feet thick. These were added in the 17th century, and Christopher Wren later rebuilt the exterior.

Since 1968, the Crown Jewels have been housed in the Jewel House. This one-of-a-kind collection includes St. Edward's Crown, which is made of pure gold and is still used to crown British sovereigns, as well as the Imperial State Crown. 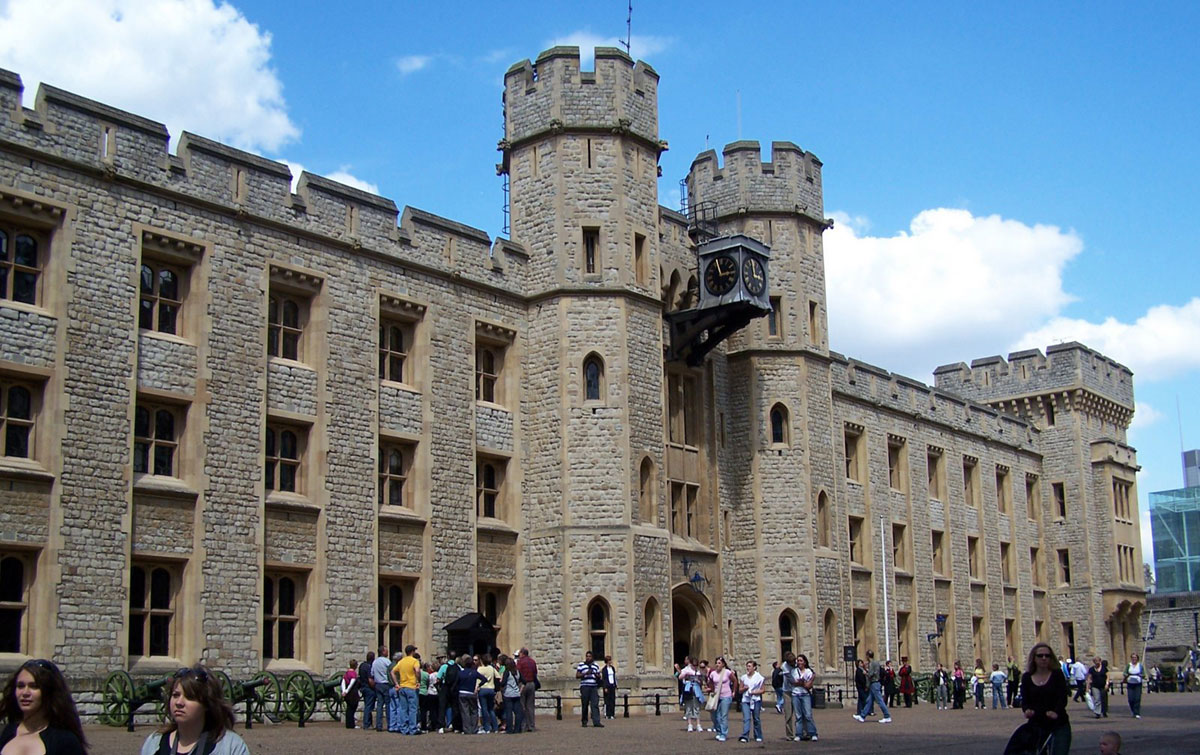 Some tourists in the Jewel House

It was constructed for Queen Victoria's coronation in 1837 and was set with over 2,800 diamonds and other precious stones. It is still worn on exceptional occasions such as the state opening of parliament.

The focus of the outstanding Coins and Kings show is the Royal Mint, which was headquartered here from 1279 to 1812. 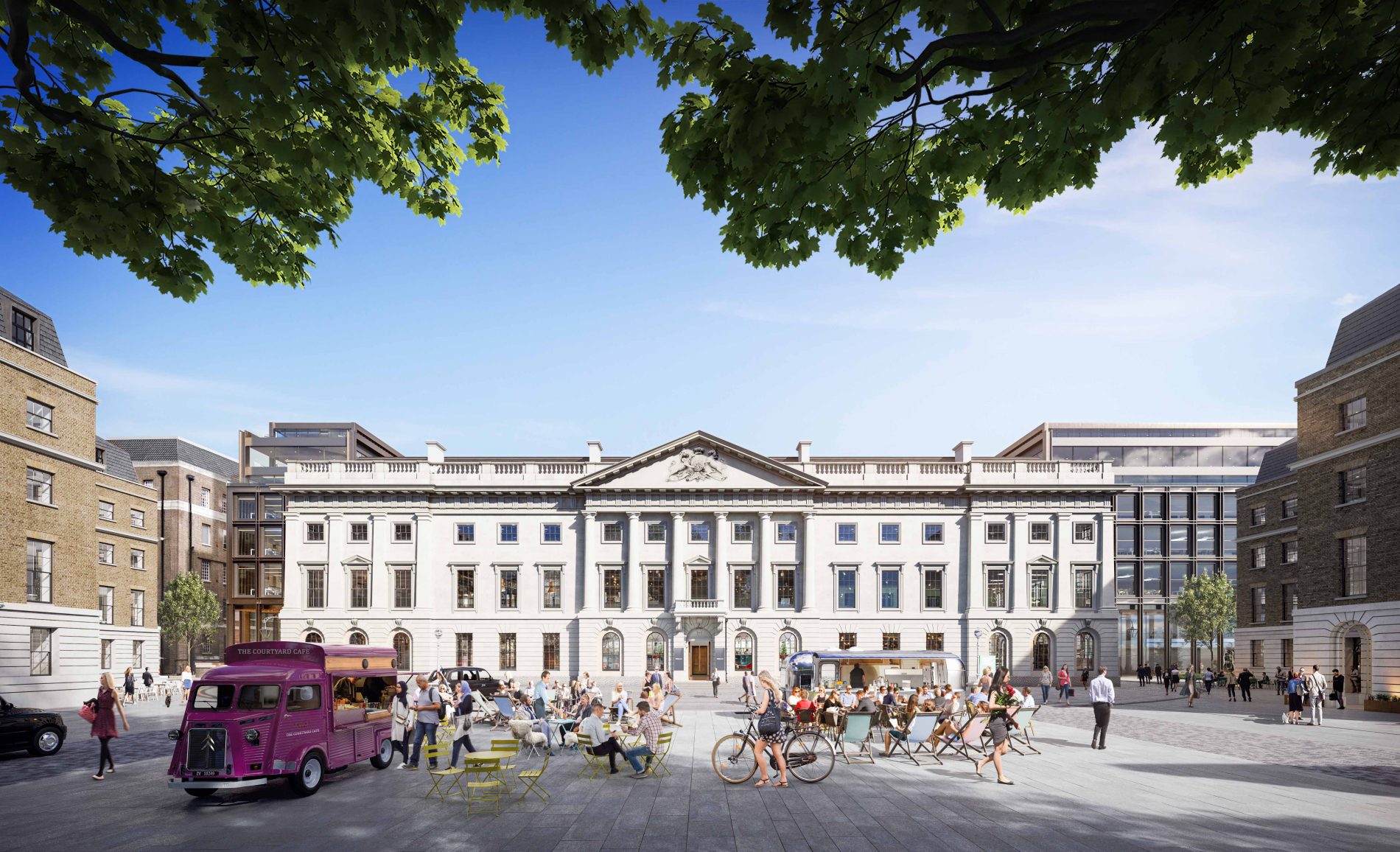 Some people at Royal Mint

The exhibit, which depicts the life of the workers and the tales behind the coins they made, is located on the historic mint site and features interactive displays and rare artefacts from the Royal Mint Museum.

The Medieval Palace, with its re-creations of the rooms used by England's kings and queens during their numerous visits, was built by Henry III and his son Edward I while upgrading the tower's fortifications, and is notable for its magnificence. 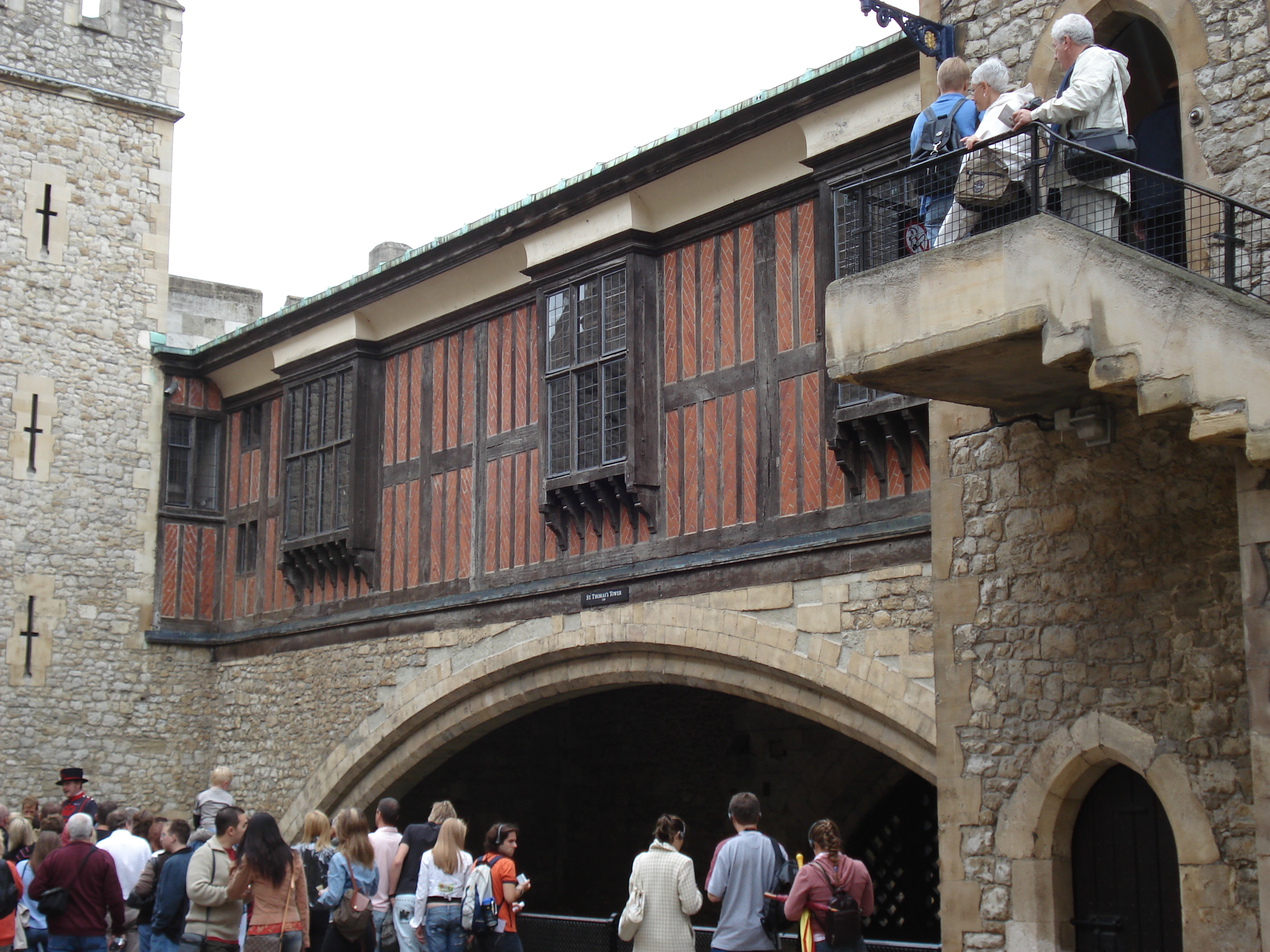 Tower of London's Medieval Palace with some tourists

The famous St. Thomas's Tower Fireplace, Edward I's Bedchamber, the Chantry, and the Lanthorn Tower with its collection of unique antiques dating back to the 13th century are all prime examples.

Many of the tower's darkest secrets were held in the aptly dubbed Bloody Tower, as were some of the country's dirty actions. 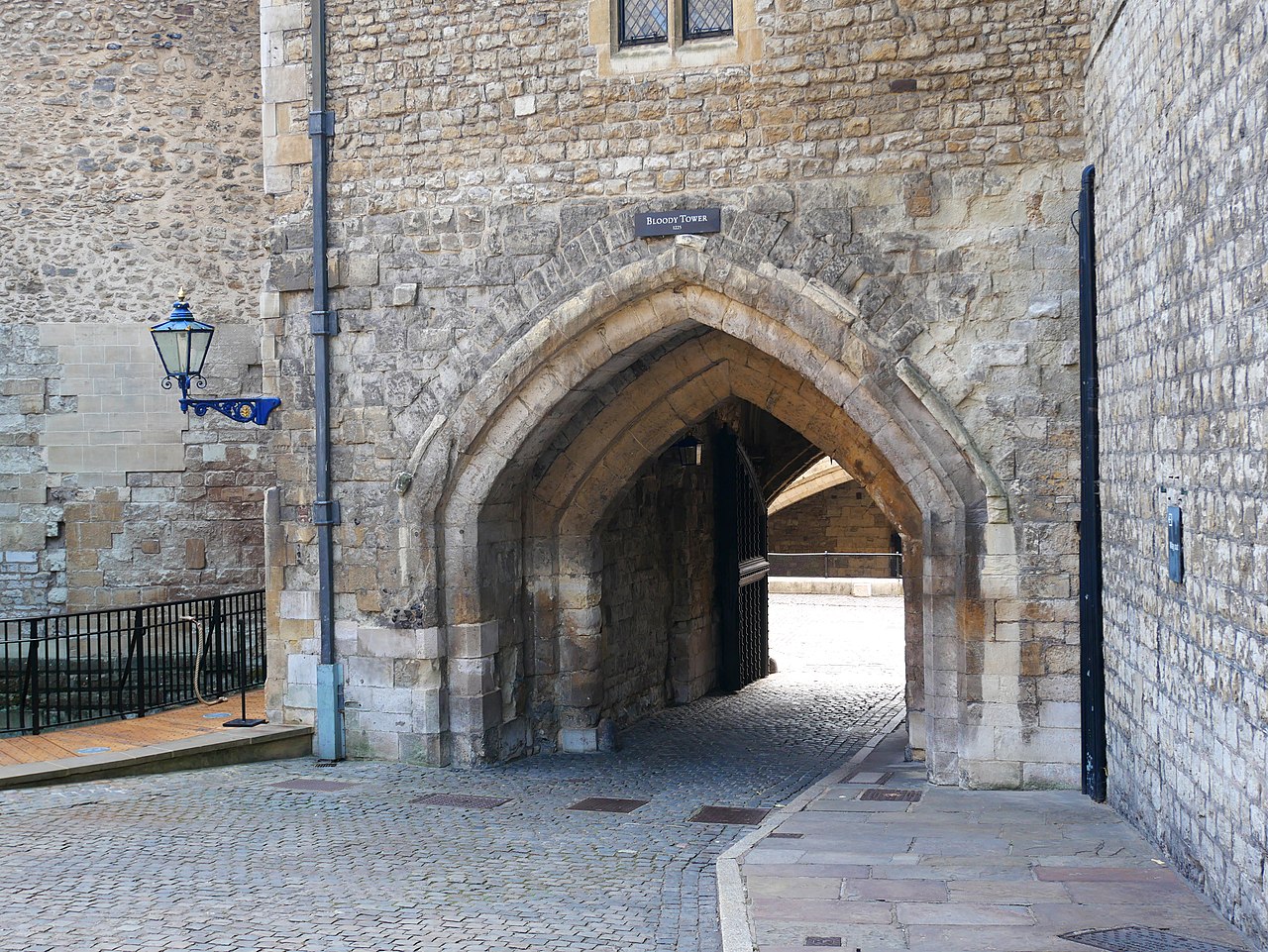 Bloody Tower at the Tower of London

Sir Walter Raleigh was among its renowned inmates, and his cell remains exactly as it was during his three imprisonments here (including one 13-year stretch).

The tower was named after the "Princes in the Tower," Edward and Richard, who were assassinated by their uncle, King Richard III.

Can You Take Pictures In Tower Of London?

Most locations of the Tower of London allow visitors to take photographs. Photography is not permitted in the following sites for religious or security reasons: The House of Jewels. Martin's Tower.

Why Can't You Take Pictures Of The Crown Jewels?

The Jewel House, which has held the beautiful Crown Jewels since 1661, is arguably the most cherished feature. Unfortunately, photographs of the Crown Jewels are not permitted for security reasons. And you won't want to attempt with the menacing security guards scrutinizing your every move as you walk into the Jewel House.

What Is The Tower Of London Famous For?

In times of war and revolt, the Tower served as the most secure fortification in the nation, guarding royal possessions and even the royal family. However, over the past 500 years, monarchs have utilized the Tower as a shockingly opulent castle. The Tower has also served as a visual emblem of awe and horror throughout history.

This amazing UNESCO World Heritage Site has played several roles throughout its long history - portions of it are almost 1,000 years old. It has been a stronghold (many times besieged, never taken), a royal palace, a prison and place of execution, a royal mint and treasure vault, an observatory, and a private zoo for five centuries.