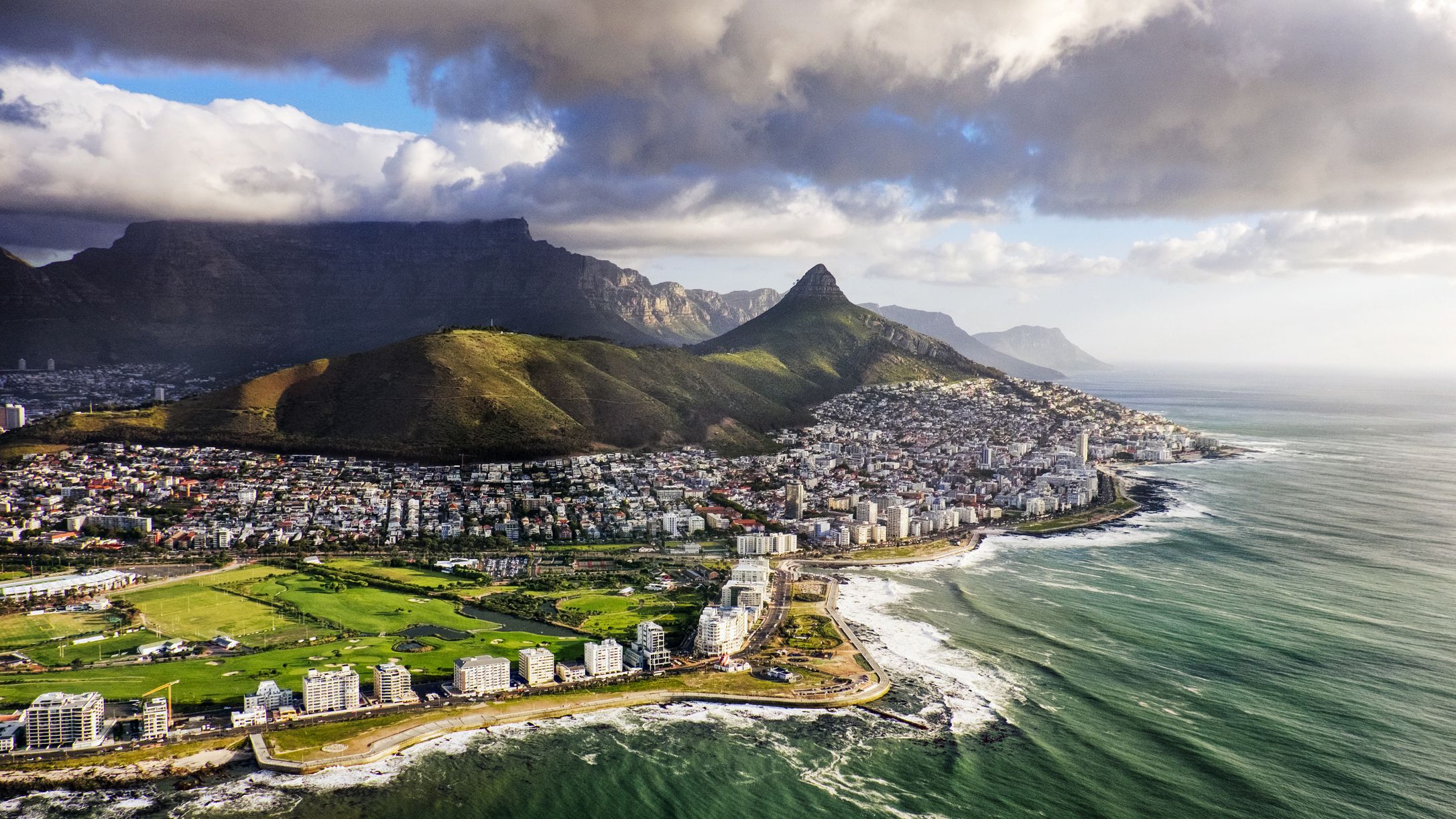 The South African map is located at the southernmost tip of the African continent. South Africa is a lovely country famed for its wildlife, beaches, and varied culture.

It also has some great natural attractions that draw travelers and tourists from all over the world. 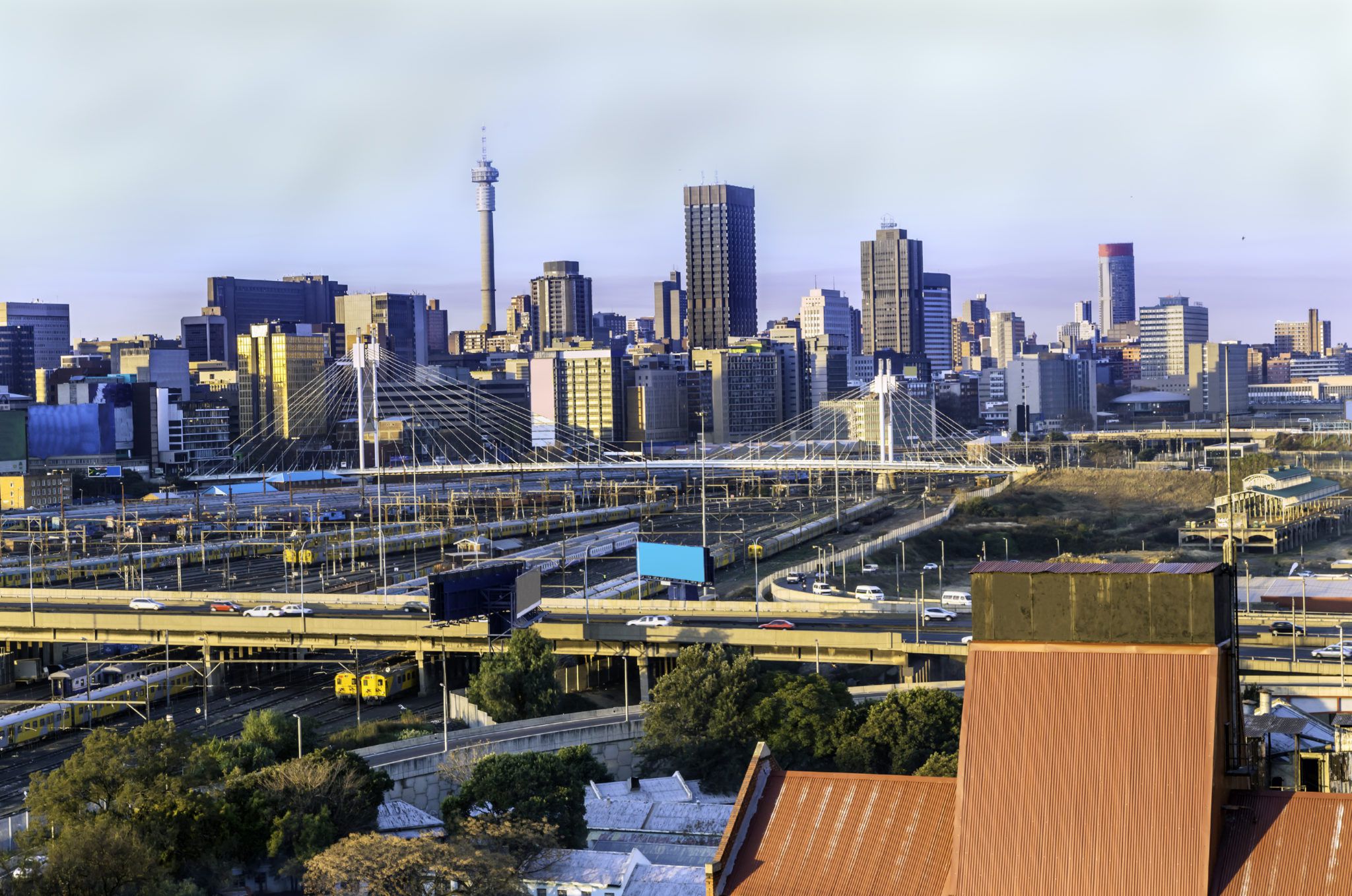 One of the major cities in South Africa

South Africa, the African continent's southernmost country, is known for its varied topography, remarkable natural beauty, and cultural diversity, all of which have made the country a popular tourist destination since the formal end of apartheid (Afrikaans: "apartness," or racial separation) in 1994.

South Africa is home to some of the world's oldest archaeological and human-fossil sites. Archaeologists have discovered several fossil remains in a network of caves in Gauteng Province.

The area, designated as a UNESCO World Heritage Site, has been dubbed "the Cradle of Humankind." Sterkfontein is one of the richest sites for hominid fossils in the world. Swartkrans, Gondolin Cave, Kromdraai, Coopers Cave, and Malapa are among the other attractions. In 1924, Raymond Dart named the Taung Child (found near Taung) as the first hominid fossil discovered in Africa.

Additional hominin remains have been discovered at Makapansgat in Limpopo Province, Cornelia and Florisbad in the Free State Province, Border Cave in KwaZulu-Natal Province, Klasies River Mouth in the Eastern Cape Province, and Pinnacle Point, Elandsfontein, and Die Kelders Cave in the Western Cape Province. 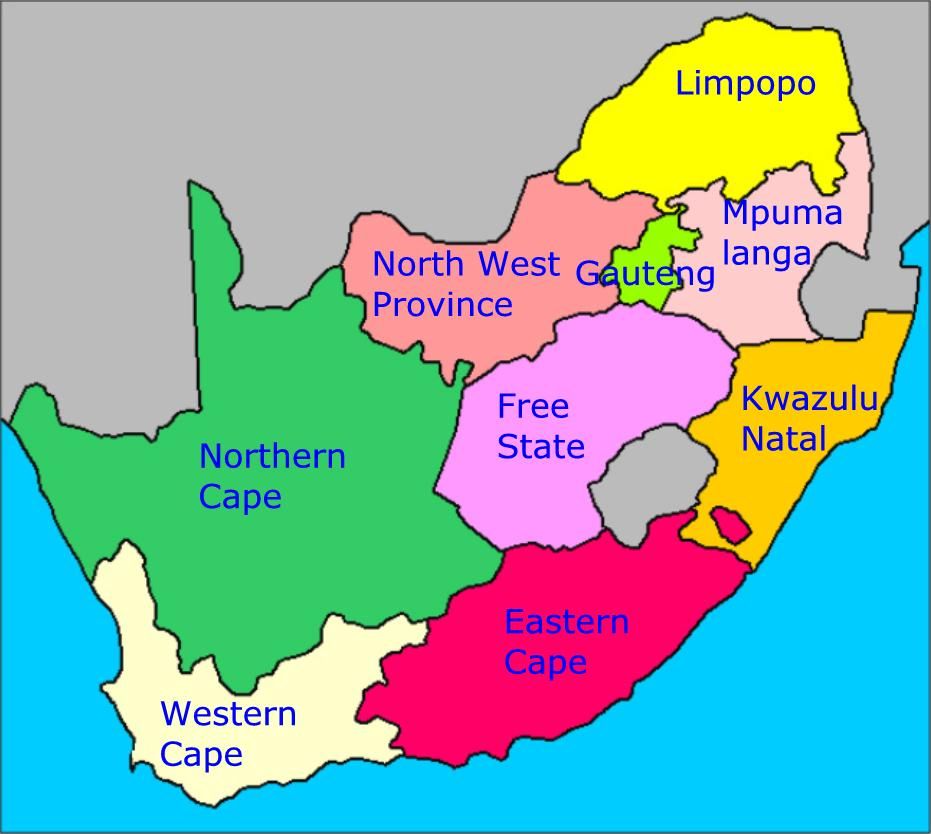 A color coded South African Map with its regions

South Africa, located at the continent's southern tip, is bounded on the west by the Atlantic Ocean and on the south and east by the Indian Ocean.

Namibia is to the northwest, Zimbabwe and Botswana to the north, and Mozambique and Swaziland to the northeast. Lesotho is an enclave in the southeast of South Africa that covers an area approximately three times the size of California.

South Africa is located in southern Africa, with a coastline that runs over 2,500 kilometers (1,553 miles) and along two oceans (the South Atlantic and the Indian).

South Africa is the world's 24th-largest country, covering 1,219,912 km2 (471,011 sq mi). It is roughly the size of Colombia, twice that of France, three times that of Japan, four times that of Italy, and five times that of the United Kingdom.

Mafadi in the Drakensberg is South Africa's highest summit, standing at 3,450 meters (11,320 feet). With the exception of the Prince Edward Islands, the country is located between latitudes 22° and 35° South and longitudes 16° and 33° East.

South Africa's heartland consists of a broad, practically flat plateau with an altitude ranging from 1,000 m (3,300 ft) to 2,100 m (6,900 ft), highest in the east and sloping gently lower towards the west and north, as well as somewhat to the south and south-west.

The Great Escarpment[90], whose eastern and highest part is known as the Drakensberg, surrounds this plateau. 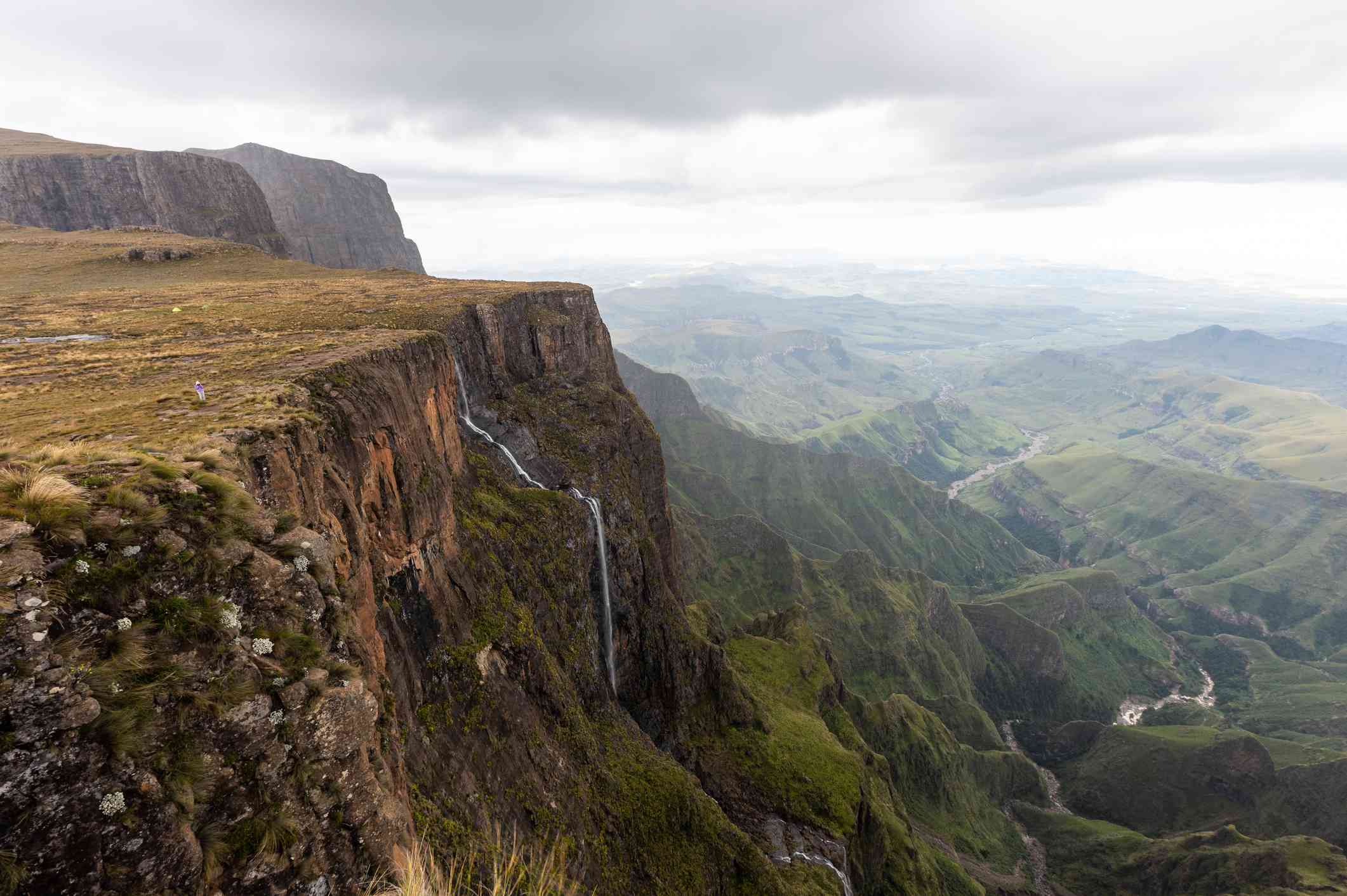 The Majestic view of one cliff in Drakensberg

The Drakensberg is a mountain range in the South African province of KwaZulu-Natal. Locals often refer to the Drakensberg as "The Berg," which translates to "Mountains of the Dragon."

When you witness the grandeur and majesty of these mountains, the significance of such a dramatic name becomes clear. The area, which is part of the Great Escarpment, is home to a variety of waterfalls and hiking routes divided into northern and southern portions. 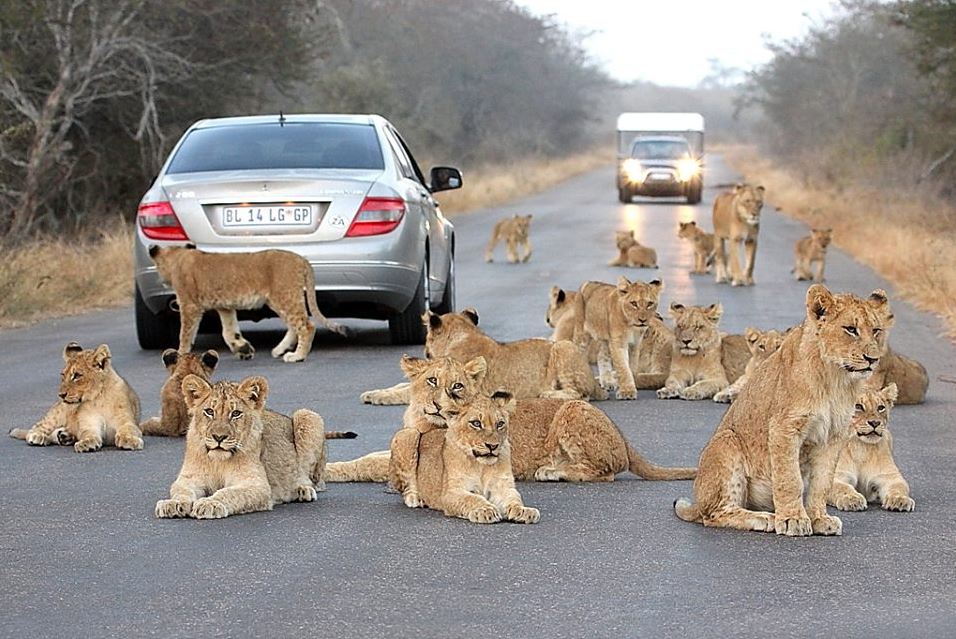 A pack of lions on the highway in Kruger National Park

The Kruger National Park, one of South Africa's most well-known and accessible game reserves, is a wildlife enthusiast's dream.

Kruger National Park, located in the country's north-east, encompasses a vast expanse of ecosystems that support a diverse range of animals, from grasslands and dense forests to thickets and dry riverbeds.

Although it was founded in 1898, the park did not open to the public until the 1920s. Since then, Kruger has been a must-see destination for both residents and tourists expecting to sight one of the legendary Big Five. 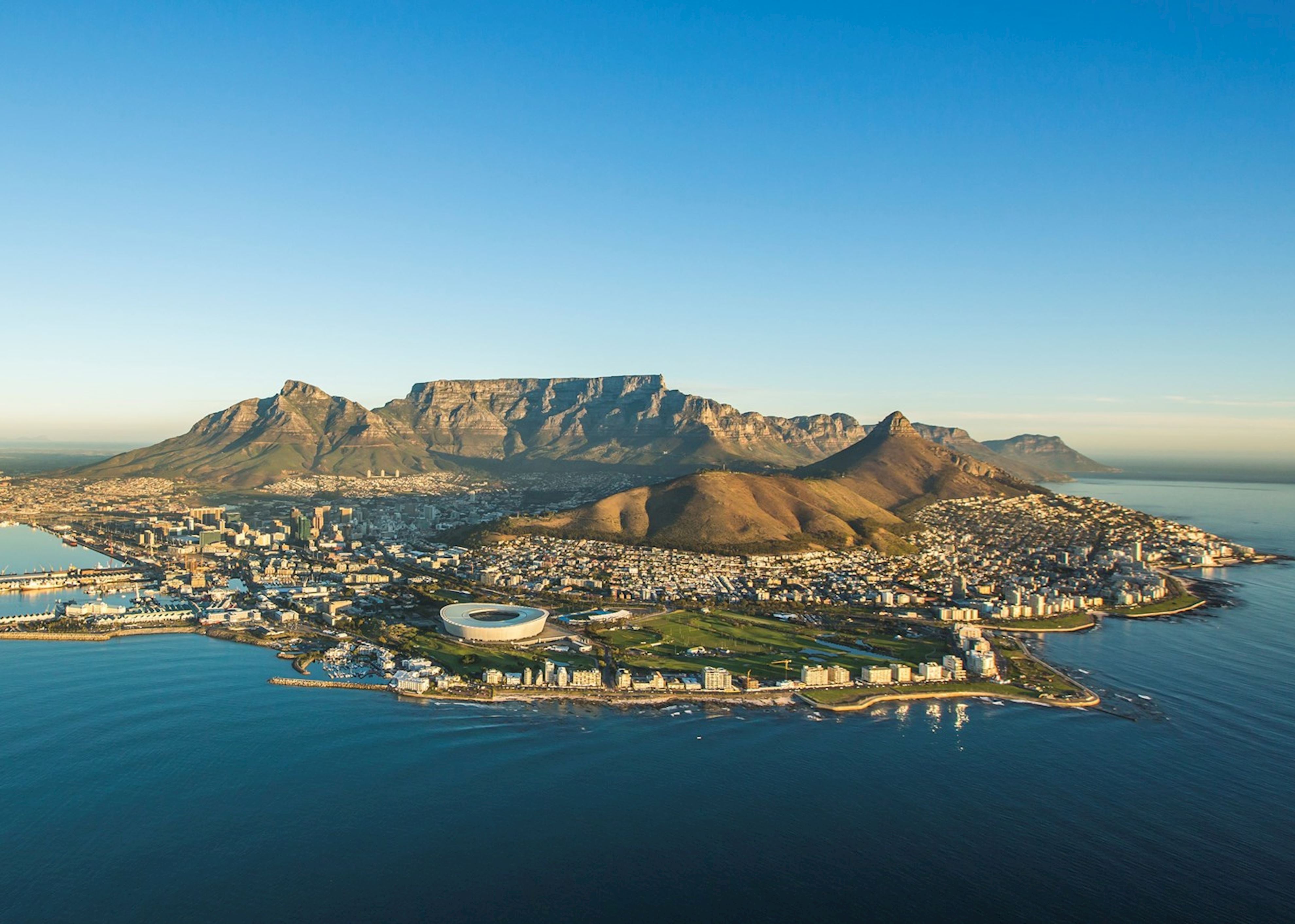 An aerial view of Cape Town with mountains in the backdrop

The Mother City, with its beautiful beaches, spectacular mountain views, and friendly people, is a must-see for any South African. It may be the country's second-largest metropolis, but it is definitely one of the most recognizable places in the world.

Cape Town, located on the southwest coast of South Africa's Western Cape Province, has a mild Mediterranean climate and a stunning natural backdrop.

Cape Town, surrounded by Table Mountain and overlooking the infamous Robben Island, has a little bit of everything - history, nature, culture – you name it, Cape Town has it.

Is South Africa A Poor Country?

South Africa is one of the world's most unequal countries, with a Gini score of 63 in 2014/15. Inequality is widespread, persistent, and has risen since 1994. Income polarization manifests itself in very high levels of chronic poverty, a few high-income individuals, and a relatively small middle class.

What Is South Africa Famous For?

South Africa, the African continent's southernmost country, is known for its varied topography, remarkable natural beauty, and cultural diversity, all of which have made the country a popular tourist destination since the formal end of apartheid (Afrikaans: "apartness," or racial separation) in 1994.

How Safe Is South Africa?

South Africa has a very high crime rate. The biggest security concern to travelers is crime. Violent crimes, such as rape and murder, are common and have implicated immigrants. Muggings, armed attacks, and theft are also common, frequently occurring in tourist areas.

South Africa is famed for its diversity, making it one of the most interesting places in the world to visit. It has over nine separate ecosystems that are home to over 1,000 different plant, animal, and bird species.