The Best Pacific Beaches You Must Visit Before You Die 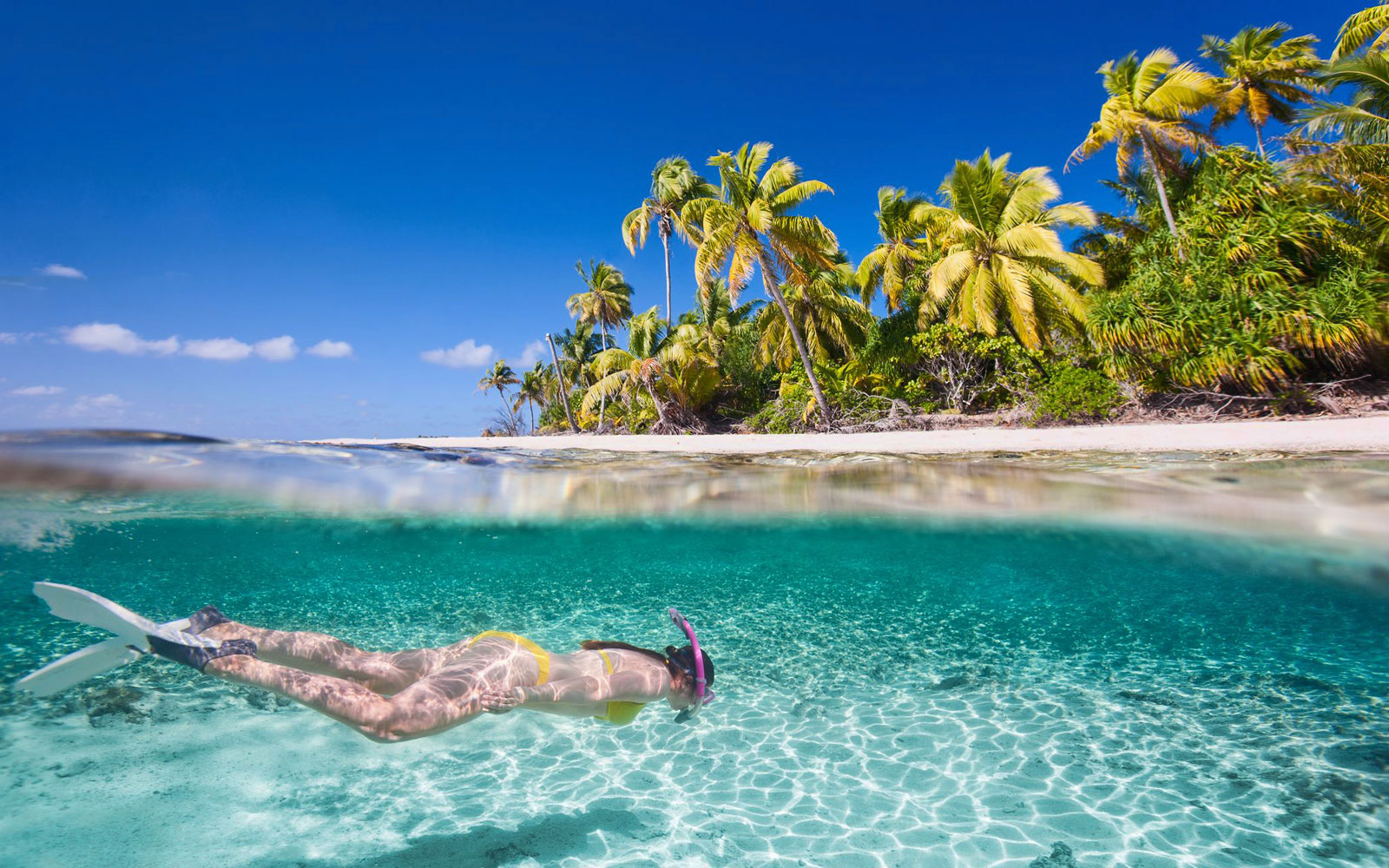 It is the largest ocean on the planet, and it is known as the Pacific Ocean. It covers around one-third of the earth's surface. The Pacific Ocean is home to around 25,000 islands, the majority of which are found south of the equator. It is possible to find stunning islands with breathtaking South Pacific beaches.

Are you yearning for an island getaway? Somewhere warm and tropical. Somewhere warm, where the waves pound the white sand beaches and afternoons are spent lounging on warm seas with a cocktail in hand, is what you've been looking for. Do you want additional material for your daydreams? Here are some of the best Pacific beaches in the world.

When you think of the mythical islands of the South Pacific, images of turquoise oceans, palm palms, pristine beaches, and ideal sunny days are typically the first things that come to mind. In this enchanted region, you will find some of the most gorgeous islands on the planet, yet these tropical havens have something unique to offer visitors. 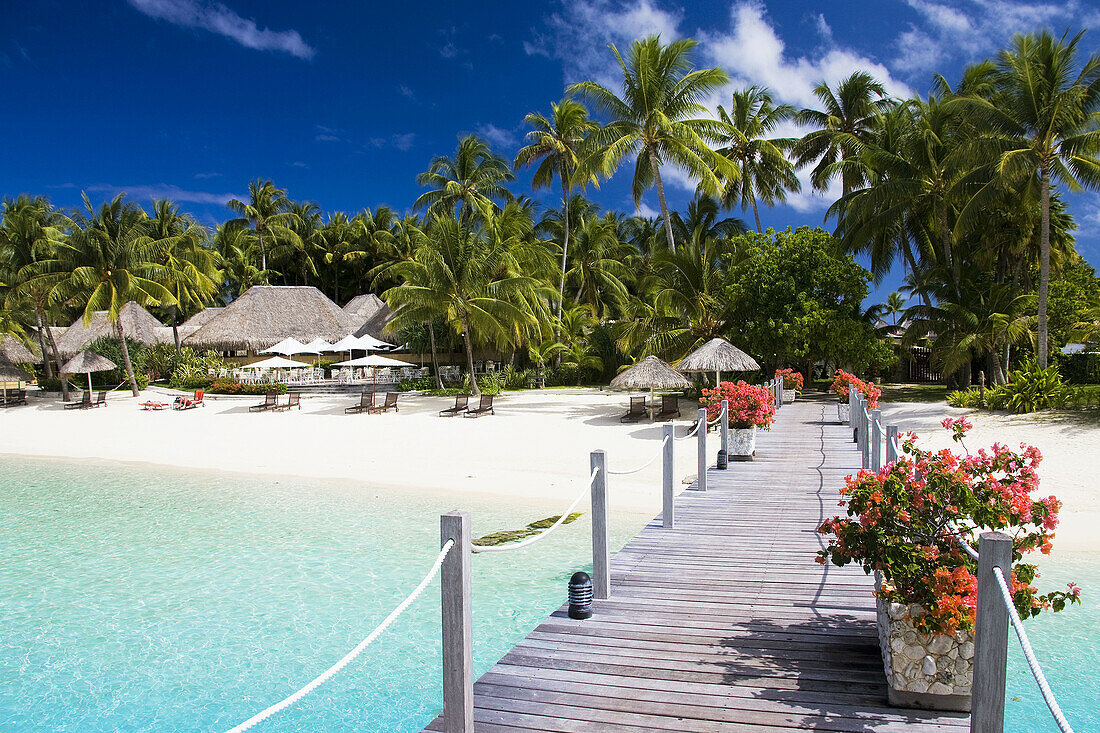 It has been declared the most beautiful beach in the world multiple times, and Matira Beach, which is located at the back of the island and directly across the road from the Intercontinental Le Moana Resort, has been named this year's most beautiful beach in the world. You will understand why it is so valuable after you have seen it from above, which you may see on any of the island excursions. The beach spreads out in a half-moon form from the shore, with fine white sand and the most spectacular sunsets in all of the world. Watch the sun gently fade away towards the horizon while sipping on a beverage from Le Moana Bar and Grill. 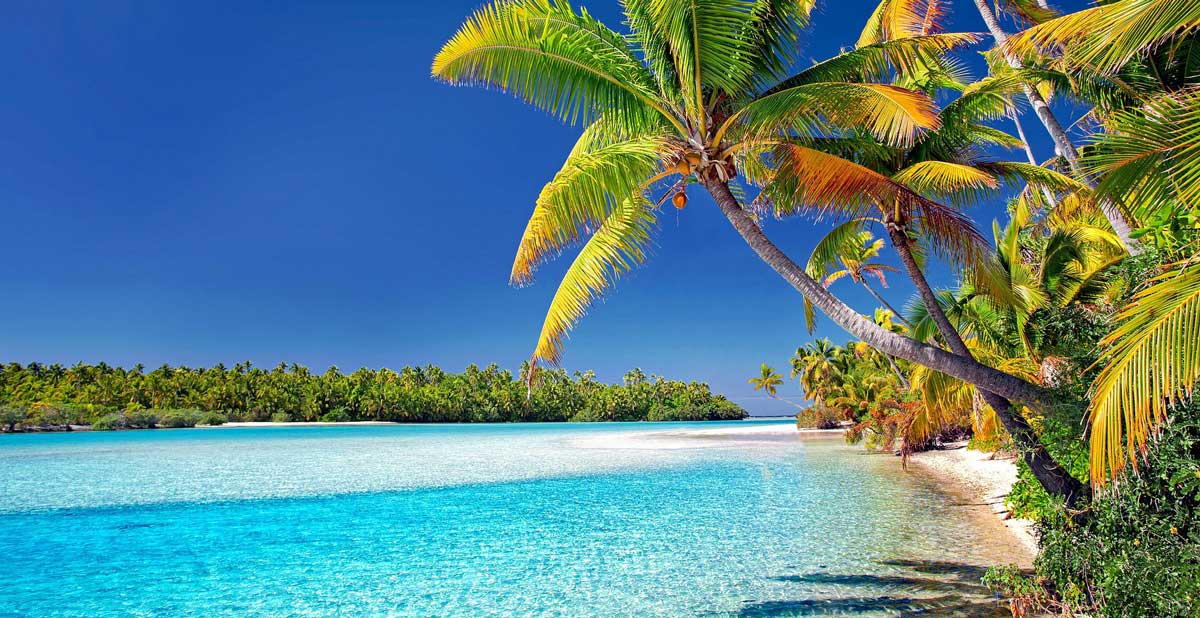 The cook islands with palm tress

Aitutaki is a gem of the South Pacific, presiding over another of the region's most gorgeous lagoons and a relatively unknown destination. The Cook Islands, which are closely related to New Zealand, is located between French Polynesia and Samoa.

As the second-most visited island in the chain, Aitutaki may be reached by plane from Rarotonga, the most popular island and the home of the international airport, which is roughly a 45-minute journey away.

The island of Aitutaki loops around one of the Cook Islands' most popular attractions, the magnificent Aitutaki lagoon, which is located at the island's most northern extremity. Uninhabited Motus (islets) dot the beautiful waters within kayaking distance of several of the resorts, while schools of trevally and other tropical fish swarms in the shallows, attracting the attention of divers. You may take a picnic and imagine you're Robinson Crusoe for the day by paddling out into the ocean. 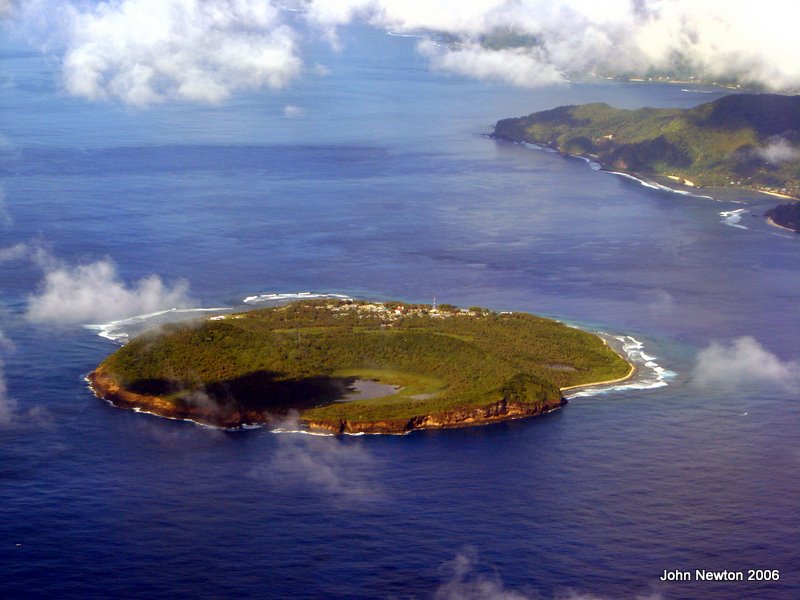 American Samoa is not recognized for having sandy beaches, which is a shame. Instead, the largest volcanic island has excellent surf, breaks, and cliffs that are breathtaking. With the exception of Aunu Island, a tiny islet off the main shore that may be reached by boat in 10 minutes. Upon reaching the dock area, the boatmen will carry you over as soon as the boat is fully loaded with passengers and luggage.

There are a lot of people in Aunu, and there is a big town section with stores where you can get basic goods, as well as the main sandy beach strip. After then, it's all over to the forest. There is a route that encircles the island, but it gets lost in the heavy jungle in the heat of the day. You will encounter blowholes, massive fractures, and even fast sands when exploring the area. 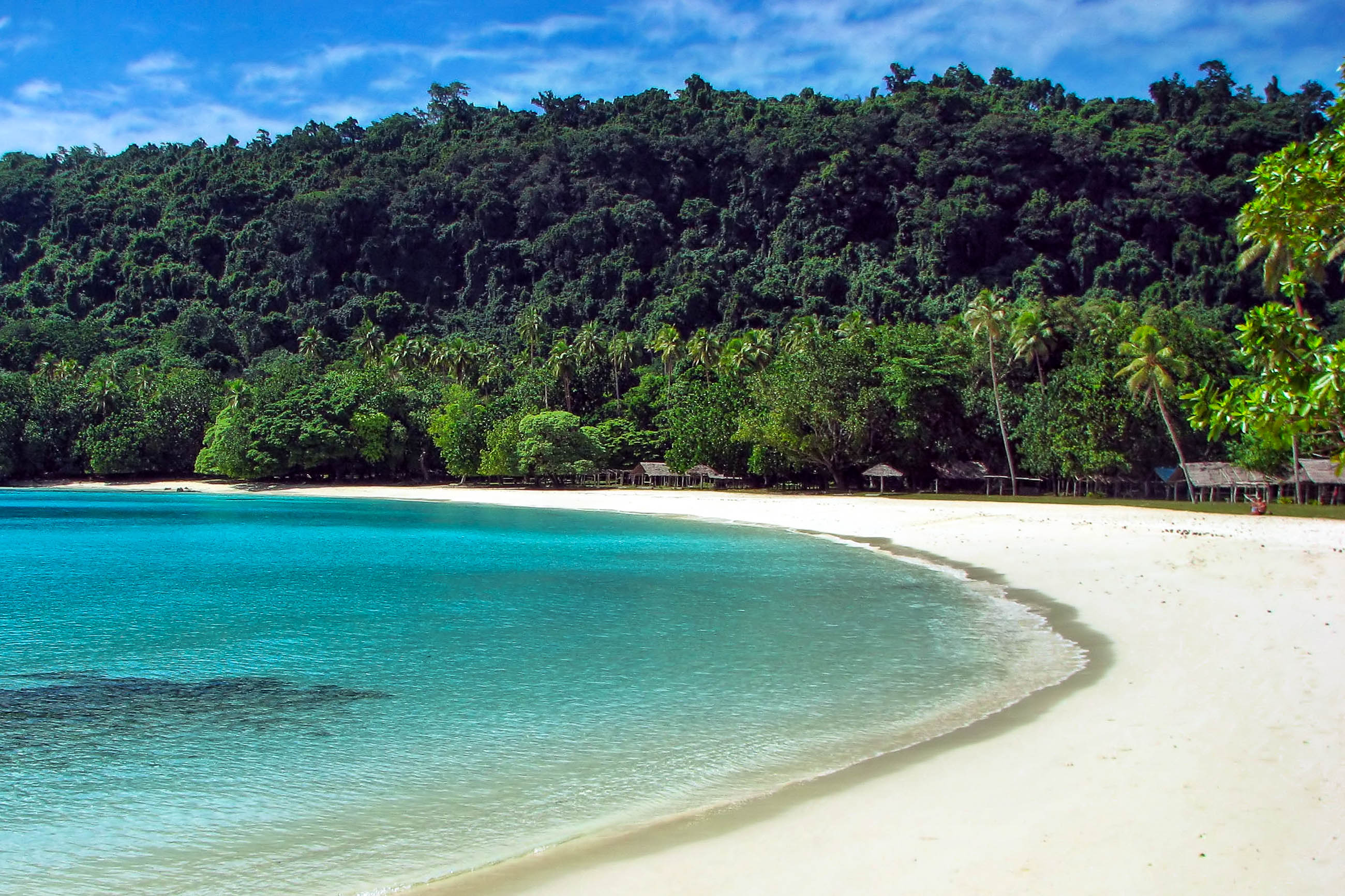 Champagne Beach, Vanuatu with trees and nipa hut on the shore

It was inevitable that it would become one of my favorite beaches with a name like this! Vanuatu's Champagne Beach is a tiny crescent-shaped beach with white powdery sand that slopes down to a coral-fringed lagoon with crystal clear blue water. Unspoiled rain forest surrounds the beach, which gradually rises to the peaks of mountains that view the shoreline in the distance. The sea is quiet and shallow, and the water is wonderfully clear. Champagne Beach got its name when someone noticed that the lagoon's waters had an effervescent aspect to them during low tide, which reminded them of Champagne!

After a lengthy trip to get here, take advantage of the tranquility. As a result, Espiritu Santo attracts fewer visitors than the main island of Efate in Vanuatu, and because getting to Champagne Beach involves a little work, you are more likely to have the beach to yourself. What a beautiful beach! 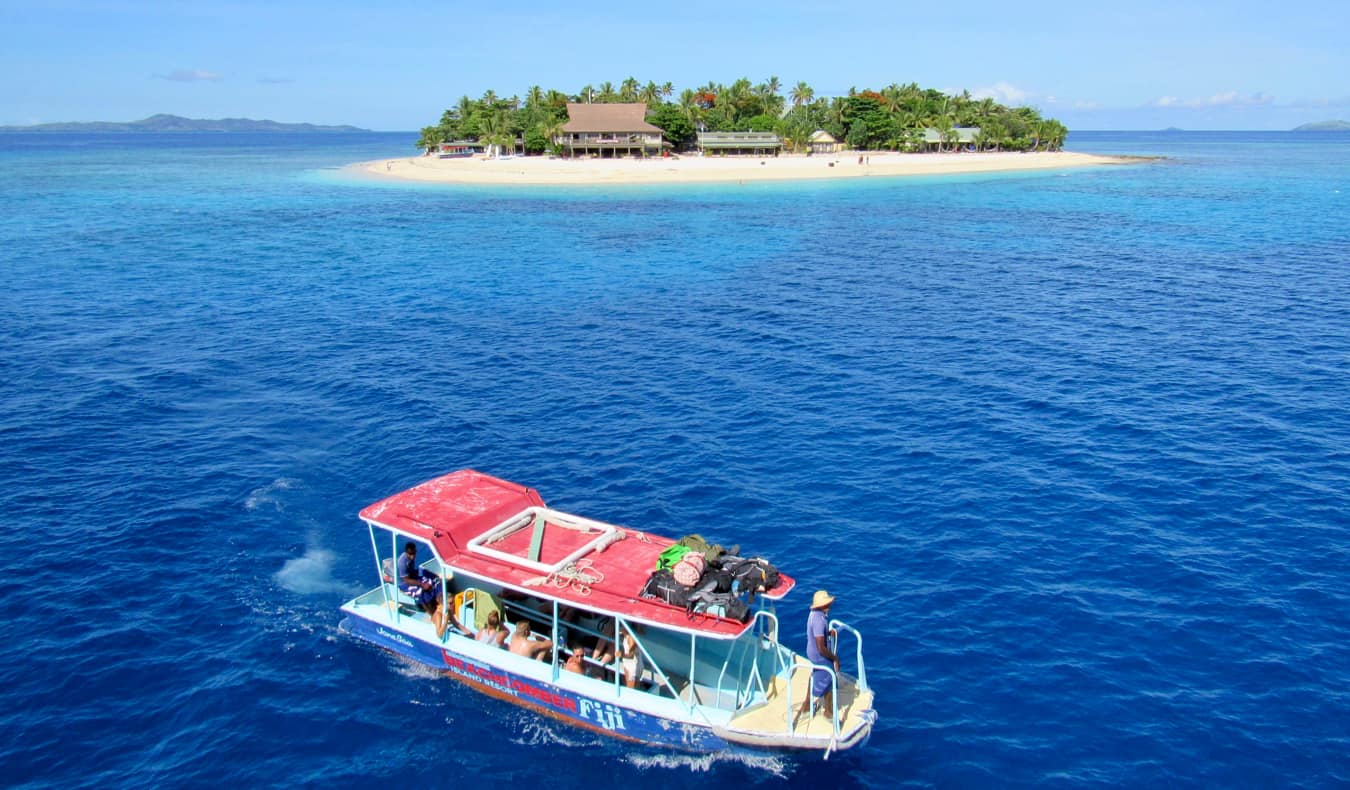 Some of the most beautiful beaches I've ever seen may be found on this beautiful group of islands off the coast of northwest Fiji. The one on Yasawa Island, the northernmost in the series, is a long stretch of deep sand broken up by a teapot-shaped rock outcrop that also serves as a natural boundary between two Fijian communities. Yasawa Island Resort, Oarsman's Bay Lodge, and Nanuya Island Resort are just a few of the resorts that have beautiful beaches.

The Yasawa Islands are an archipelago of roughly 20 volcanic islands located in the Western Division of Fiji with a total land area of approximately 135 square kilometers. They are part of the Pacific Ocean. On these islands, you'll discover a handful of gorgeous resorts and spas surrounded by 11 uninhabited beaches, each of which is a little haven of tranquility. Private picnic lunches with bottles of Champagne and gourmet prepared baskets are organized by the resorts in this area. You'll be transported to a private beach of your choosing – pleasure!

Why Visit A Pacific Beach On Your Next Vacation?

The Pacific Islands appear to be a tropical paradise, complete with white, sandy beaches, turquoise lagoons, and strewn palm palms. These islands, which are scattered throughout the South Pacific, are tiny and undeveloped.

A vacation in the Pacific Islands is all about unwinding, disconnecting from the stresses of everyday life, and savoring the simple pleasures of a tropical island - exotic fruits, pleasant weather, stunning lagoons, and fresh seafood - as much as possible. While these vacations are less about action or luxury, they are more about just taking in some of the most breathtaking scenery the earth has to offer.

Many of the islands (with the noteworthy exception of Fiji) are still in the early stages of development, with only a few major hotel chains operating there. However, while the tourist business in the Pacific Islands is robust, it is mostly geared toward New Zealanders and Australians.

How To Get To A Pacific Beach From Your Location?

Getting to the Pacific Islands from New Zealand is unquestionably the most convenient mode of transportation. Flights to and from each island are available many times a week. As well as flights from Australia, Fiji has a weekly trip from Los Angeles, and the Cook Islands has a connection to Canada through the Cook Islands International Airport.

Traveling between the South Pacific Islands is more challenging than you may expect, with routes changing on a regular basis as the region develops. Although, as previously said, Tonga normally has favorable air connections with Fiji and Samoa, and flights are often available between French Polynesia and the other South Pacific Islands. It is essential to double-check before you go.

Please keep in mind that several of these islands have closed their borders as a result of the coronavirus outbreak. This section will be updated as soon as the border crossings reopen and flights begin again.

When To Visit South Pacific Beaches?

The Pacific Islands have two different seasons: the wet season and the dry season. The dry season, which runs from April to October, is the most popular period to visit the islands since it is the least expensive. This is due to two factors: one, the weather is excellent, and second, it is winter in New Zealand and Australia, where many tourists originate.

During the winter months, the humidity levels are significantly lower, and the cyclone season has gone in most areas. Between June and October, you'll have a better chance of seeing humpback whales as well. On the other side, there will be a greater number of tourists and rates will be slightly higher.

It is totally feasible to travel to the Pacific Islands during the off-season (during the winter months). However, bear in mind that there is a good chance of rain during your visit, as well as high humidity. Some attractions can also be closed, especially if you arrive outside of the Christmas school holidays. In addition, it is cyclone season, so severe winds and torrential rain are possible, but rainfall is normally mild and there are still extended stretches of sunny weather.

If you're seeking unspoiled beaches, world-class snorkeling, and far-flung coves, then a vacation to the Pacific is highly recommended. There are countless islands to choose from, whether you want to wander along peaceful beaches, learn about traditional culture from the friendly locals, or swim with manta rays in crystal-clear waters, there is something for everyone. No matter what sort of vacation you're searching for, the Pacific will meet your expectations.

It may take some work to reach the hundreds of island countries that make up the South Pacific, but for many people, the effort is well worth it once you get there. In this large region, you'll find unspoiled beaches, significant historical monuments, and a laid-back environment that's perfect for a relaxing vacation.