The Top Mediterranean Beaches Around The World You Should Visit 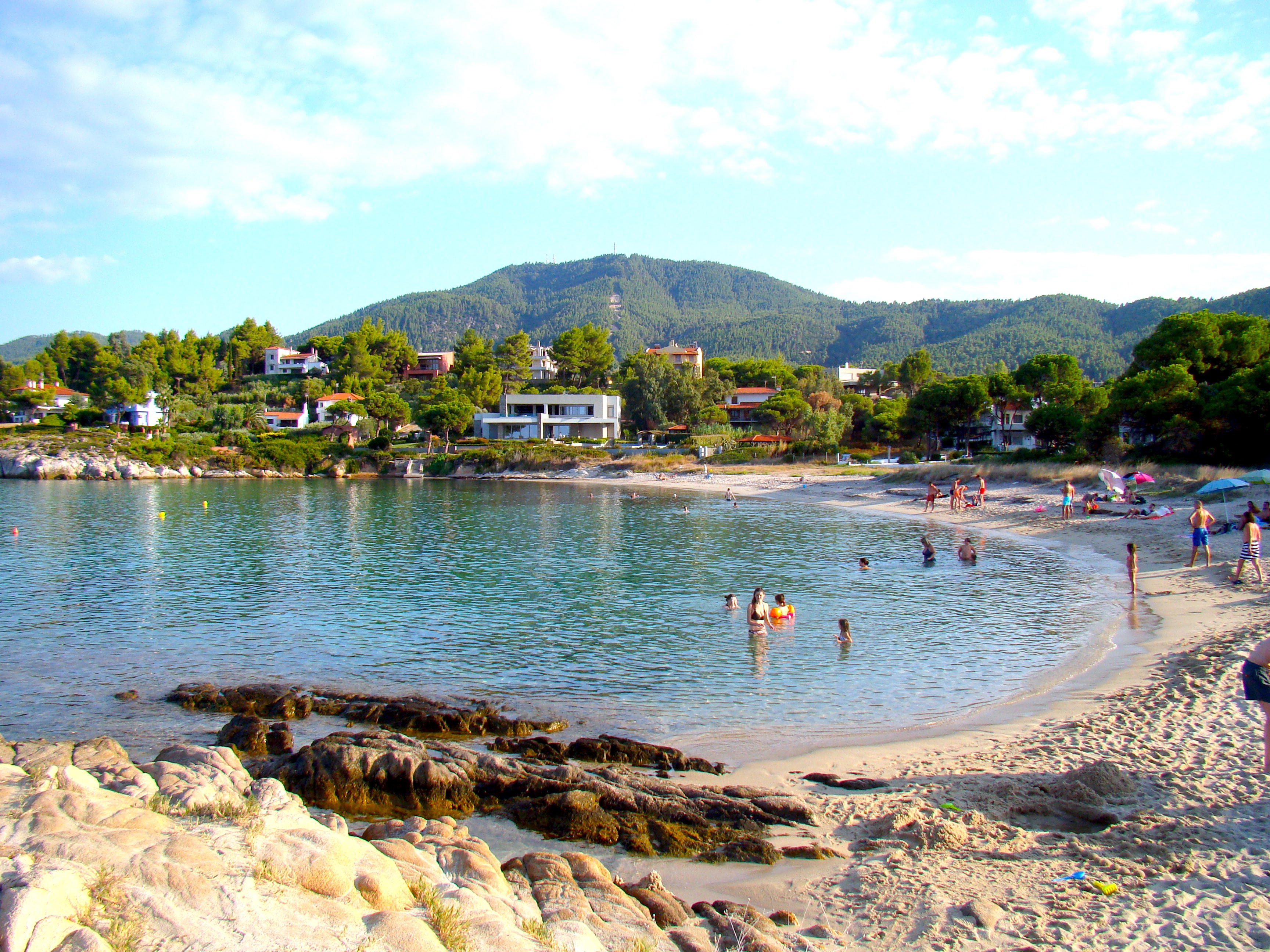 Mediterranean Beaches cannot be compared to those in the Caribbean or the Pacific. The water is colder, and the sand is rougher, almost pebble-like. Palm tree fringes are likewise uncommon, yet bright sunlight, tasty cuisine nearby, pleasant people, and reasonable pricing are all too prevalent. The beaches are great from May to October, but the water is still a touch cool until June, and July and August are often busy.

In the Mediterranean, good waves are rare; the Atlantic Ocean is the preferred location for wave riding. Mediterranean beaches may be found in Greece, Turkey, and Spain's Balearic Islands, but the guidelines are on other sites.

Unlike its larger competitor, stony Nice, a few kilometers up the Côte d'Azur, Cannes offers modest sandy beaches that give a good amount of rent-free area, while surrounding cafés serve delicious meals at cheap prices. The promenade is just as pleasant to stroll along as Nice's, with far less traffic and a shorter length.

However, when contrasted to some of Nice's wonderful ancient structures, Cannes' buildings are sometimes drab, and Nice's shopping, walking, dining out, and nightlife scenes are more diverse and exciting.

Furthermore, Nice is a true French city with a fantastic daily market, whereas Cannes appears to be completely geared toward tourism. It's difficult to find street parking near the beaches in Nice, but it's even more difficult in Cannes. The best choice is to park in a pay lot. Both towns' traffic may be congested.

If you can locate a parking spot, the less-known Côte d'Azur beaches may be really charming and enjoyable. Make sure to arrive early! There are a lot of places with names like Marrakesh and Khatmandu. St Tropez is one of them because it has a name that is both loud and sexual.

It's a fantastic spot with good-sized beaches, but it's also a terrific place with working people and big traffic jams [it took the bug team an hour to drive from Cannes to near St. Trop, then another two hours to traverse the last 5 kilometers]. For typical mortals with thin wallets or crowd fears, this is not a suggested vacation destination. If you have to, take the boat from Cannes or St Maxime. Pictures of the beach at St. Tropez overcooked and understand beaches at Juans-les-Pins and Antibes.Monaco? Hah! Only if you like your dosage of UV on this little beach with carbon monoxide, self-important trophy wives, and mega-yacht sightings.

Menton, which is literally next door to Italy, is a peaceful town with a pleasant microclimate, chic architecture, and a couple of decent beaches.

Cap d'Agde, near Montpellier, is naturist-friendly, so take off your clothes. Not just on the nudist beaches, but all over the city, from restaurants to banks, the natural look is everywhere. 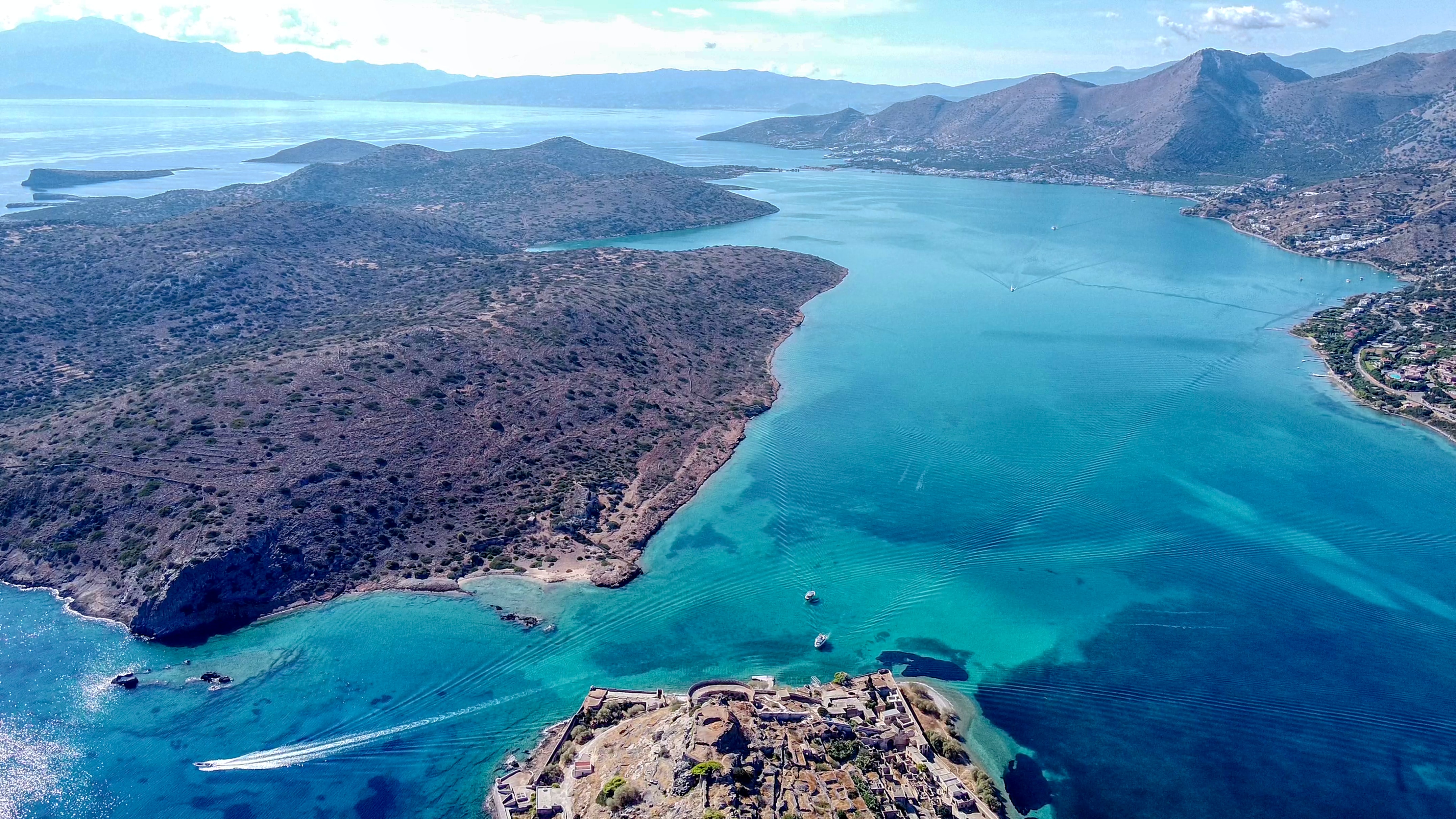 Drone shot of bay of Elounda

This French island is opulent, flamboyant, and one of the greatest spots in the Mediterranean for water sports. There are countless empty beaches and hidden coves along Corsica's 600-mile coastline.

St. Restitude, near Calvi [North West]: St. Restitude is an ideal location for a calm retreat. An isolated, tiny beach with soft sand and clear water, surrounded by pine trees.

Palombaggia Beach, Santa-Giulia Beach, and Golfe di Sogno Beach are all located near Porto-Vecchio [Southeast]: Located on a rocky slope, Port Vecchio is a wealthy resort town with its own beach, a yacht port, bustling streets, and a good number of hotels, cafes, and restaurants. It also has a lot of high-end shops and restaurants.

The best beaches are to the southeast of the town. Palombaggia Beach is a perfect crescent of white sand sandwiched between a blue sea and a cluster of dunes with an excellent beach restaurant. Santa Giulia Beach is a few miles south, and the area around Golfe di Sogno to the north is also very beautiful.

Take a boat or a lengthy walk from St. Florent to either Saleccia Beach or Loto Beach for greater seclusion. There are no amenities or many people at either location; instead, there is plenty of soft golden sand—including a mini-desert—and pure water. A campsite is located near the desert in Saleccia. See the Beaches of Corsica page for further information.

May-June and September are the best months. Although hot and congested like the rest of Europe, July-August is a good time to visit.

Terracina is located 1.5 hours southwest of Rome, on the road to Naples. Terracina's beach is one of the greatest on the Italian mainland, with lots of comfy sand and no pay-parasols, but it's close to beach cafés serving cool beverages and modest meals.

The town itself is peaceful and beautiful, although it is not directly near the sea, so you'll need wheels or at least a 20-minute walk to get wet. Terracina Beach may be found here. Lampedusa is a small island in the Mediterranean Sea.

This little island has more of an African feel to it than a European one. It features crystal-clear water, beautiful beaches, and some of the best swimming and skin-diving in the Mediterranean. The majority of hotels are within walking distance of the beaches, and there are also campgrounds. It's essential to book ahead in July and August. To get there, take a boat from Port Empedocle or fly from Palermo. You may fly straight from Milan in the summer. It's best from May through September, but avoid July and August if at all possible.

The Costa Verde is a small island off the coast of Sardinia in the Tyrrhenian Sea. Sardinia boasts a magnificent, cove-pocked, beach-packed coastline that is less developed than many other islands. The Costa Smeralda, the island's most well-known resort sector with 5-star construction, is undoubtedly one of the most beautiful sections in the Mediterranean.

Grab a set of wheels and hit the road if you want to get away from the throng. Aside from that, Santa Teresa di Gallura [to which a daily boat service departs from Palau] also offers beautiful coves and beaches. The Best Sardinia Beach Photos OK in May, June, and September. Although hot and congested, July-August is a good time to visit.

Croatia has a long coastline full of islands and beautiful beaches, many of which are shingle [small stones]. Kolocep is an Elafiti island off the coast of Croatia, close to Dubrovnik to the south. It has some of Europe's most beautiful and isolated beaches, like Zlatni Rat [Golden Horn] on the island of Brac, which has blue water and a crescent shape. Beachgoers love it.

Shingly Zrce has three 24-hour beach clubs that play Ibiza-style music. Banje beach, which is just outside Dubrovnik's medieval walls, is ideal for days of hot culture and cold sea. On a couple of Croatia's 1,000+ islands, there are some fantastic scuba diving walls, reefs, caverns, and wrecks. May-June and September are the best months to visit. Unless crowds are an issue, July-August is OK. Beaches in Croatia may be found here.

Spain is a good investment. Majorca and the Balearic Islands have their own pages. The Costa Brava is located on the extreme northeast coast of Spain. Cap de Begur is a beautiful area about 40 minutes from Girona that has a lot of old and new Spanish culture, as well as a lot of great little beaches. The beaches range from Aiguablava to nudist L'Illa Roja to family-friendly Llanfranc and Platja de Raco.

Murcia is a city on the east coast of Spain. Calblanque is a secluded 1.5 kilometer-long nudist beach with quiet, clean water and solid golden sand surrounded by hills. There are extremely few facilities available.

Located in the Cabo de Gata National Park, the small town of Agua Amarga is home to 800 meters of white sand and a low-key development. This makes it a traditional, quiet beach resort with great wild treks in the national park nearby.

Tarifa is another popular, appealing, low-key beach region with a limited number of hotels but plenty of activities. Winds are normally rather high due to their position on Europe's most southerly point, which is wonderful for wind and kite surfers but may be bothersome for swimmers and tanners.

Bolonia Beach, near Tarifa, is a 3 km long nudist beach with all the main facilities. It is unspoiled and unsophisticated, yet a bit windy and has coarse sand. If it's too crowded for you, go towards Cadiz, where you'll find even less crowded beaches.

Long lengths of magnificent white sand beaches run along the Mediterranean coast from Alexandria to Mersa Matrouh, and they are still relatively underdeveloped and uncrowded. The environment is laid-back, and the people are kind and welcoming. There are a lot of little hotels to choose from.

May through October is the best time to visit. Avoid the winter months as well as Ramadan. There's usually a bustling feast day at the end of Ramadan, Idd al-Fitr, and be wary of the Khamseen in April.

There is plenty of availability for all sizes of sailing and motor watercraft rentals in the region since the sea is quite calm, the weather is typically pleasant except during the winter, and coastline landmarks are easy to see while ports are many.

EU beach water tests for bacterial contamination [particularly Streptococcus and Enterococcus, which are frequently generated by sewage or decomposing materials] were published in June 2007:

The finest water was found on the beaches of Cyprus and Greece, with Spain coming in third, Italy fourth, Portugal seventh, the United Kingdom thirteenth, and France fourteenth. Poland and Belgium had the lowest beach water quality, despite the fact that French sand is washed by a lot of unclean seas.

The Environment Agency says that in some places, like the United Kingdom, there has been a lot of rain that has washed agricultural waste into rivers and down to beaches. Inland beaches in Denmark, Estonia, Germany, and Austria had the finest freshwater bathing places examined by the EU. The ponds in the United Kingdom, especially those in Hampstead Heath, were in bad condition.

Some of the French Mediterranean beaches that also failed the tests are Carry-le-Rouet, Marseilles, Saint-Chamas, Grimaud, La Seyne-sur-Mer, Toulon, Antibes, and Saint Laurent-du-Var. Ajaccio, Aleria, Calvi, Porto-Vecchio, and Saint Florent are some of the beaches of Corsica. Salobrea, Motril, Linea de la Concepcion, and San Roque are some of Spain's Mediterranean beaches. Beaches on the Spanish islands of Sant Antoni de Portmany, Port de Pollenca, and Es Castell.

Which Mediterranean Beach Are The Cleanest?

Cyprus, located in the Mediterranean Sea to the south of Turkey and west of Syria, is the European country with the cleanest seas. The EEA gave it a perfect grade of "excellent quality" after evaluating 112 distinct locations along the country's coastline.

In general, the big islands of the Western Mediterranean (Menorca, Mallorca, Ibiza, Sardinia, Sicily, and Corsica) are known for their sandy beaches. The Cycladic islands and Halkidiki in Greece, Cyprus, and the southern Albanian Riviera are all hotspots in the Eastern Mediterranean.

Why Is Mediterranean Water So Clear?

The majority of nutrients are located in the lower layers, while algae, which need light to flourish, thrive in the upper layers, where the sun shines. Many of these factors work together to make the clear, blue water that all divers in the Mediterranean know and love.

Which Country Has The Softest Sand?

Flamenco Beach, also known as Playa Flamenco, is generally regarded as one of the world's most beautiful beaches, and with good reason. It wraps a mile around a secluded, horseshoe-shaped cove and has the softest, whitest sand of any beach on the island.

For almost much of the year, the Mediterranean has crystal-clear seas. It's one of the greatest sites in the world to study and teach scuba diving. Because of the extraordinary transparency of the water, instructors can look into their students' eyes and know what they are thinking, even from a distance.