Greek Boat - Sail On The Beautiful Waters Of The Greek Islands 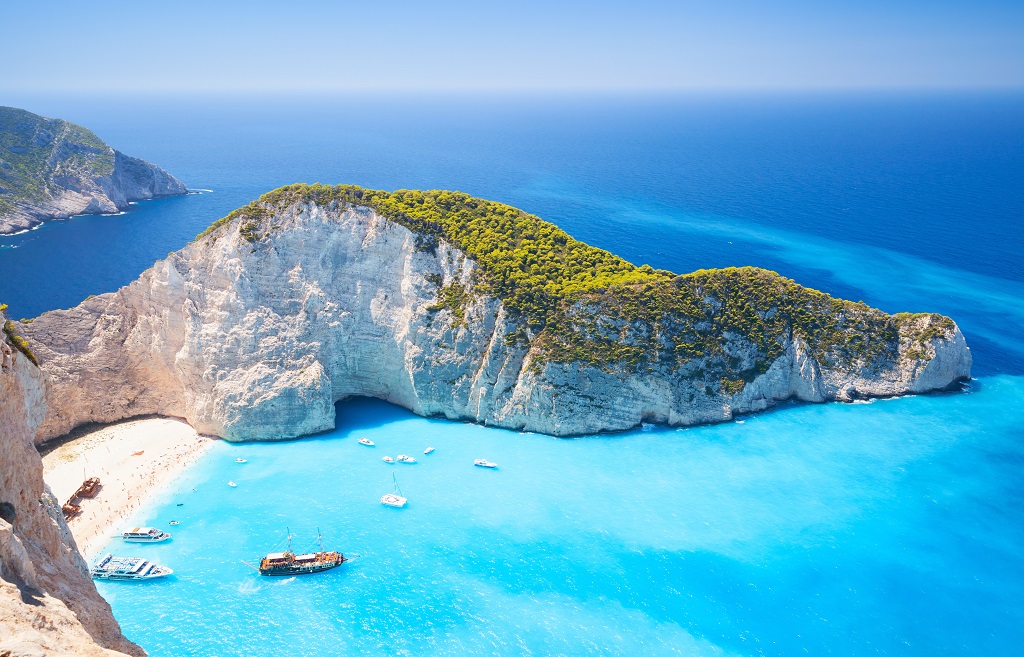 If you are a huge fan of boats, you probably know what a Greek boat is. Transportation was extremely essential in ancient Greece. The people's whole society was built around water mobility.

Depending on the size of the vessel, Greek boats featured two or three sails. These boats were built from enormous slabs of strong wood; they were large for the time but could only carry 100 - 150 kg of stone used to create statues.

Construction goods for building buildings, as well as military supplies such as iron, bronze, and so on, were commonly carried aboard the boats.

Unlike the Egyptians, who had to rely on imported wood, the Aegean peoples had an abundance of wood for shipbuilding.

Earlier Greek warships were primarily utilized to transport attack soldiers than to combat. The Iliad, for example, makes no mention of maritime fighting. Even the pirates of the time were sea raiders who sought their riches on land rather than at sea.

Herodotus mentions the so-called long Penteconter, which was used for exploration, raiding, and communication with outlying colonies. With 25 oars to a side, it was light and quick, and it played a vital role in the early spread of Grecian power throughout the Mediterranean.

As the Greek marine city-states accelerated the rise of commerce and consequently the necessity for sea defense, a galley built primarily for warfare arose. The original galleys, known as uniremes (Latin for "oar"), had their oars fixed in a single bank and were either undecked or only partially decked.

They were swift and graceful, with a high, arching stem and a stern appearance. Some carried an embolon, a beak or a ram in Homeric times, which became typical in subsequent centuries.

The bireme (a ship with two banks of oars), which was presumably adopted from the Phoenicians, quickly followed and became the dominant warship of the 8th century BCE.

Greek biremes were probably around 80 feet (24 meters) long, with a maximum beam of about 10 feet (3 meters). The earliest triremes (ships with three vertically superimposed banks of oars) appeared within two or three generations. After the Greeks' major sea victory at the Battle of Salamis, this kind gradually took over as the dominant vessel (480 BCE).

The trireme, like its forefathers, had a single mast with a broad, rectangular sail that could be furled.

When rowing into the wind or in battle, the mast was lowered and stowed. These were true seagoing warships, built on a whole different system than the Egyptians, with keel, frames, and planking.

As part of Greek history, sailing and cruising has been adapted to Greek culture. Saying this so, Greece has a variety of fantastic spots to explore. See example video below. 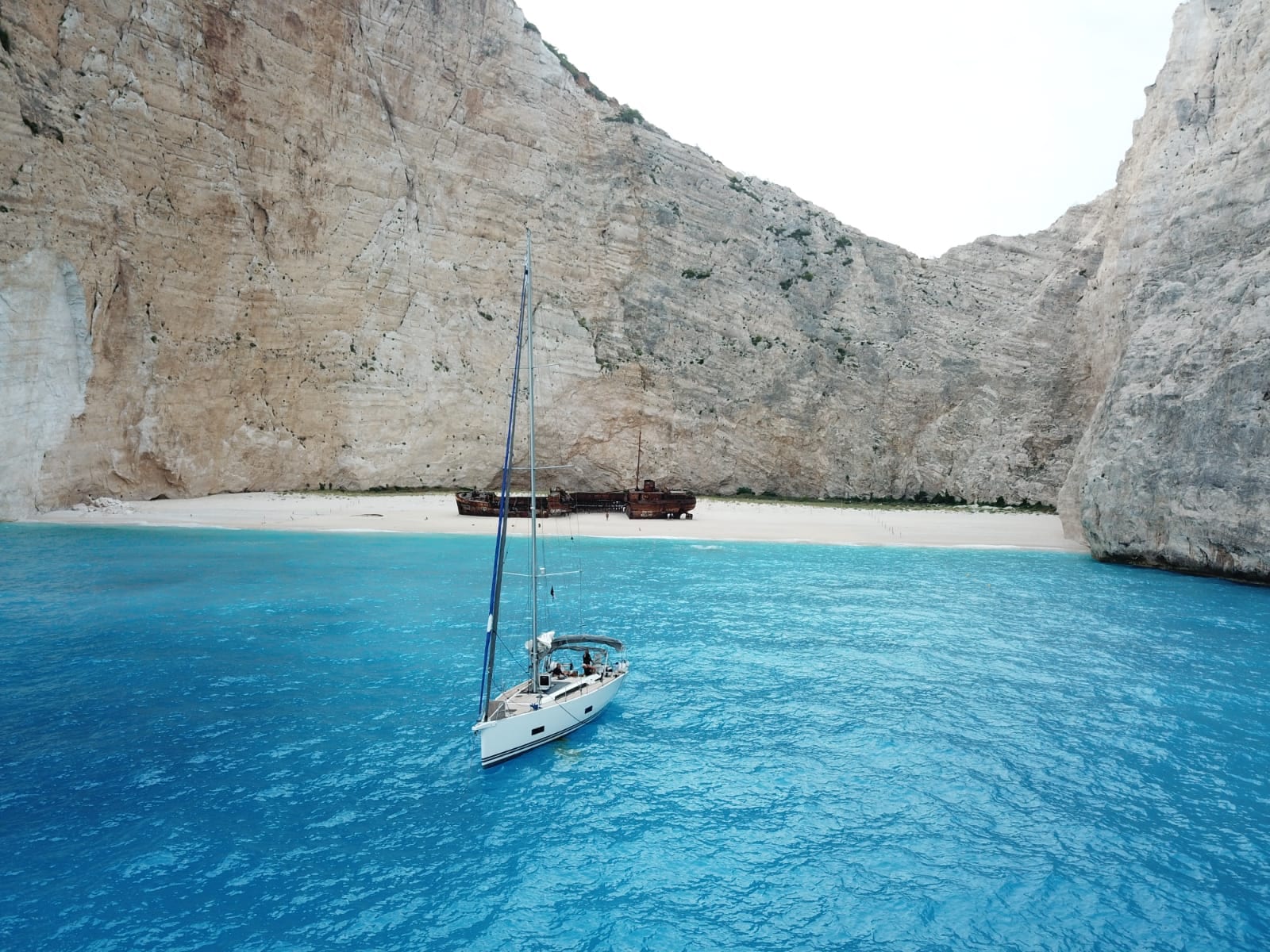 A small boat sailing on the Greek waters

Every location has its own unique beauty and specialty that draws travelers in. Yacht chartering refers to the practice of renting or sealing (chartering) a sailboat or motorboat to various tourists or visitors.

A Greek boat rental is the greatest way to cruise the sparkling Greek sea and visit your favorite Greek islands and beaches.

A Yacht cruising on the Greek waters

Discover bustling islands like Corfu, sophisticated bars and restaurants in little coastal towns like Lefkas, and the historically significant yet edgy modern Athens that will take your breath away. Spend an evening admiring the Acropolis from a bar patio, and if you don't want the night to end, get lost in its nighttime intrigues.

Consider renting a yacht in Greece to take advantage of the beautiful weather and natural beauty. Whether you choose to lease a boat with a skipper or prefer to chart your own course, there are several sites to explore, including interesting Greek cities and a plethora of beautiful islands, all of which add up to a wonderful vacation on the sea.

Because of the fact that every island in Greece has its own character and set of attractions, it is impossible to choose just one as the top destination for a boat charter vacation in Greece.

One of the world's oldest cities. Athens is a must-see during your visit to Greece.

The famed Parthenon, the remains of the old Agora, the famous Port of Piraeus, and the Acropolis of Athens, a spot steeped in history that rises in the heart of the city, may all be found here.

Santorini is the place to go if you want to witness some of the most breathtaking sunsets in all of the Mediterranean.

Santorini Boat Tours of The Caldera & Volcano in 2022

Because of its breathtaking scenery and opulent environment, the island is particularly well-liked by honeymooners and other couples seeking a romantic holiday.

It also features a number of incredible natural wonders, none of which are more remarkable than the submerged volcano that is still active to this day.

Crete is the island you should visit if the culture of Ancient Greece piques your interest.

The excavations at Knossos, which was at the center of the Minoan civilisation, are some of the most well known in Greece, and many of the findings are currently on exhibit in the Archaeology Museum of Heraklion.

Knossos was located in Heraklion on the island of Crete. However, Crete is not only known for its ancient buildings due to its many other attractions. Additionally, if you are looking for hidden coves and hiking trails, it is one of the best spots to go to visit in the world. The beaches of Preveli, Potamos, and Elafonissi are among the most beautiful on the island.

The island of Zakynthos is a great place to go if you want to see some of the most beautiful beaches in the Mediterranean.

Because it can only be reached by boat, Wreckage Beach maintains a sense of seclusion despite the fact that it is quite popular. The beach got its name from the shipwreck that is located in the middle of the beach.

Another attraction that may be found on Zakynthos are the Blue Caves, which are located at Cape Skinari. Pay them a visit and be amazed by the almost neon glow that the light creates as it reflects off the water and onto the walls.

However, Mykonos is the place to go if you are looking for a good time.

Mykonos is largely famous for its nightlife, which consists primarily of beach clubs with energetic dance music. This is despite the fact that this island is every bit as lovely as the other islands that are mentioned here. 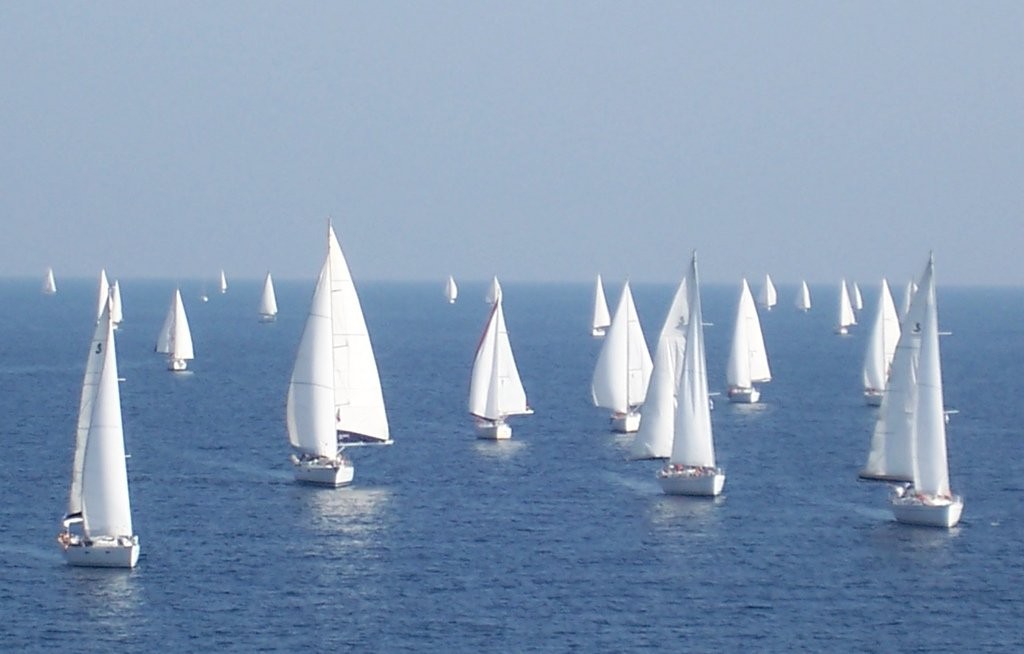 Small boats cruising on the water

From May through October, the weather in Greece is perfect, thanks to the Mediterranean climate. For those who prefer hot weather, travel in July and August when temperatures reach 30°C or higher and you can cool yourself in the pleasant sea waves.

During the summer, the Meltemi wind usually blows north and can reach high wind speeds depending on the area. This is worth investigating because areas in Greece vary. In July and August, for example, the wind force in the Ionian Islands ranges from 4-6, but the wind force in the Cyclades averages from 5-7.

How Much Does It Cost To Rent A Luxury Yacht In Greece?

Prices for luxury boat rentals in Greece, including both motor yachts and sail yachts, begin at a minimum of $7,300 per day and can go as high as $21,900 per day.

Do You Need A Boat License To Rent A Boat In Greece?

No, a boating license is not necessary to operate one of their rented boats. If you want to operate a motorboat in Greece with up to 30 horsepower, the law states that you do not need a license or proof of previous experience in order to do so.

What Are Greek Boats Called?

In Ancient Greece, a trireme was a type of warship. They were the world's fastest and deadliest ships at the time. The three layers of oars on these ships earned them the name "triremes."

A boat rental in Greece is certain to be unforgettable, as it is located along the Mediterranean Sea south of the Balkans, between the Ionian and Aegean Seas. It's the ideal site to start sail with or without a skipper, thanks to the idyllic islands and brilliant, translucent sea.