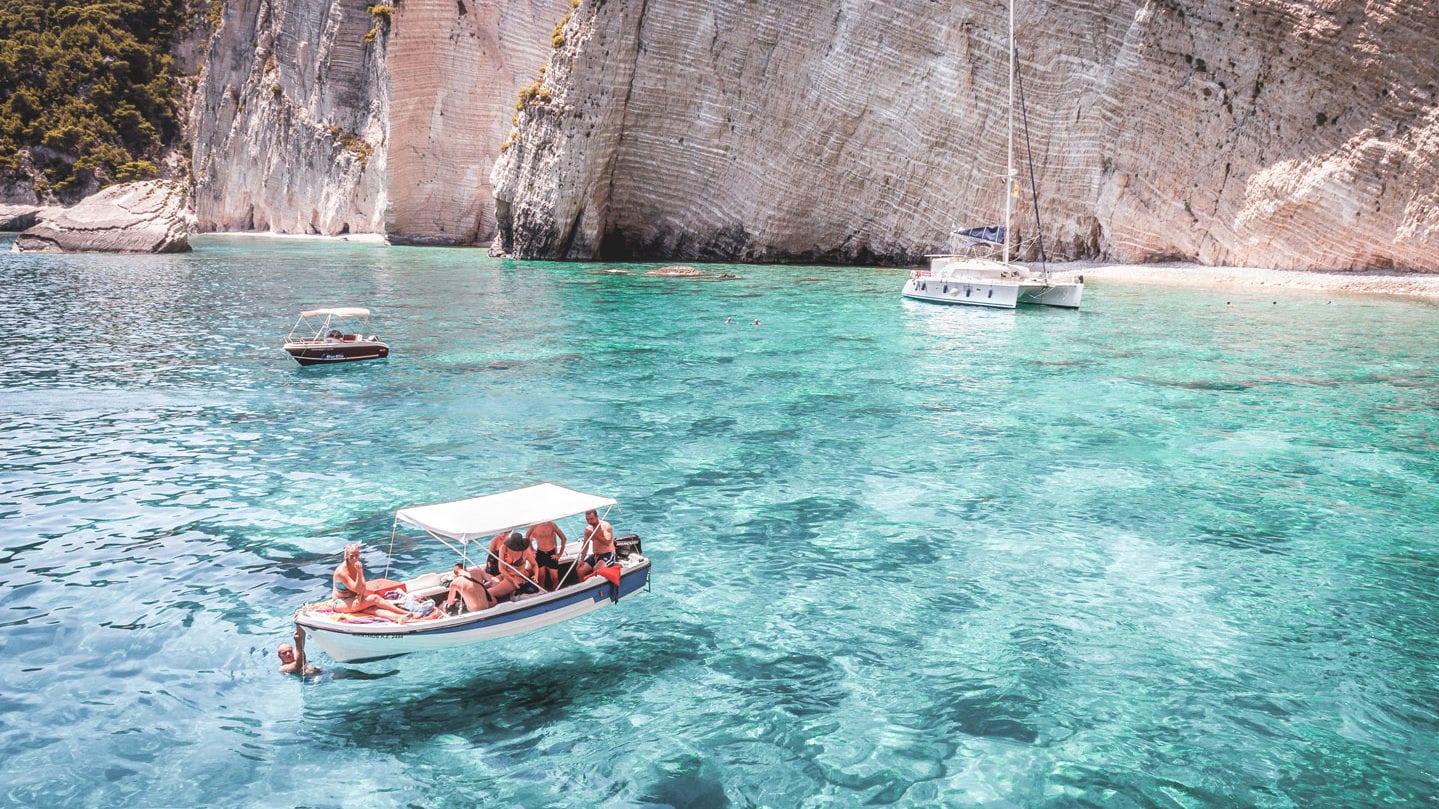 Swimming in Greece's incomparably gorgeous sea is one of the primary reasons to come. Out of hundreds of islands, picking the top five most magnificent Greece pictures beaches is a difficult task. We'll give it a shot in this piece by naming just a few of them. We've arrived! Enjoy our pick of the top 5 most beautiful beaches on the country's lesser-known islands and mainland. Whether you want to relax on the beach while sunbathing or explore the shore while participating in water sports or other activities, one thing is certain: each one is a separate location!

Which Greek Island Has Nicest Beaches

The Greek islands are among the most beautiful places on the planet, and it's no secret that they boast some of Europe's greatest beaches. Mykonos has the greatest beaches, while Paros, Naxos, Milos, and Crete offer similarly stunning beaches and are often less expensive to visit. Almost every Greek island, though, has a few lovely beaches.

Crete is the Greek island with the nicest sandy beaches. It offers some of Greece's top beach hotels and the most diversified sandy beaches. The beaches in Paros, Naxos, and Milos are equally spectacular. The Greek islands in the Cyclades islands group, in general, feature golden sand beaches (except for Santorini that has black pebbles or red coarse sand because of the volcanic soils). 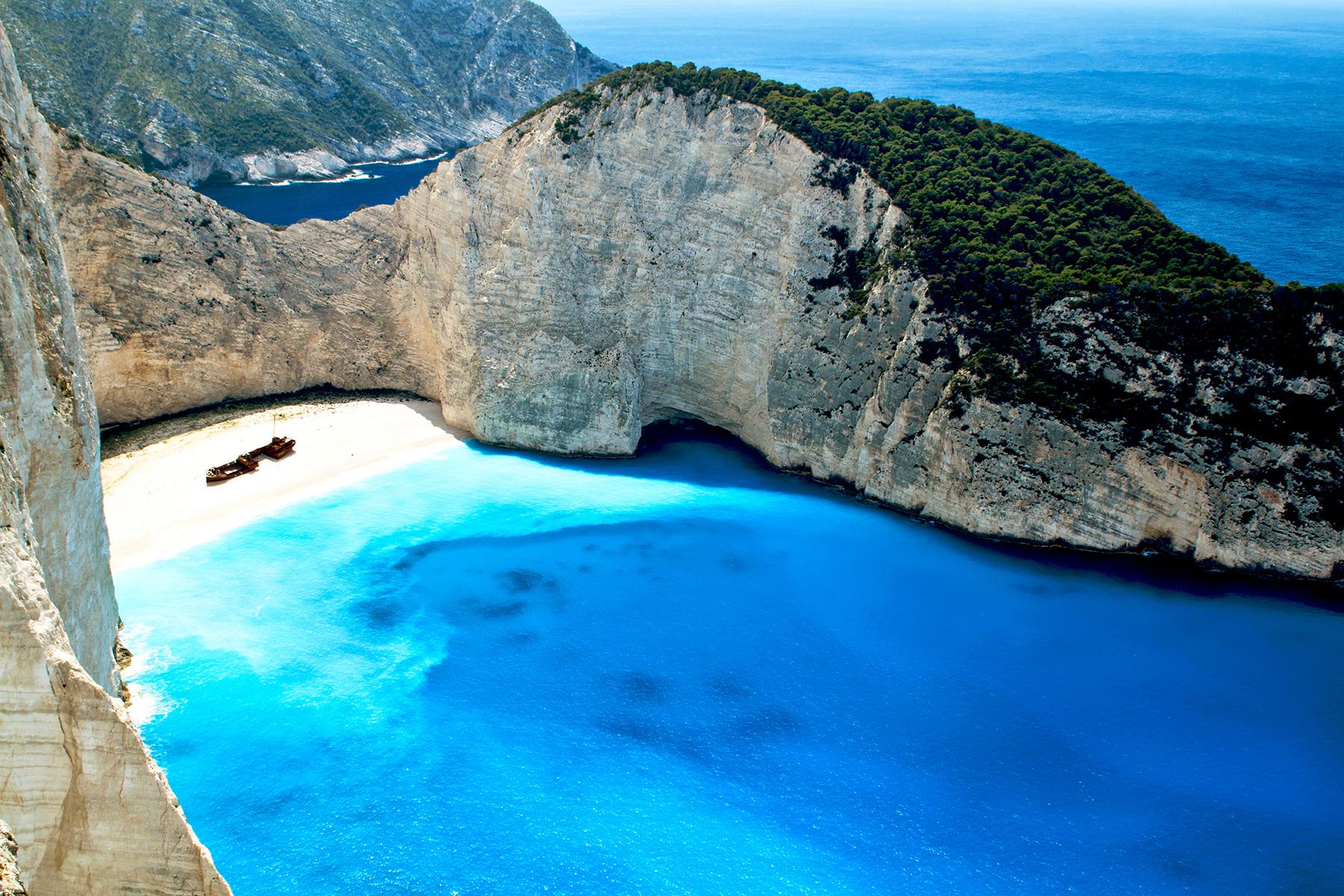 Sea with land on the side

Here is the list of best Greece Beaches that you should visit in 2022.

Elafonissi is one of those amazing places where you have to see it to believe it. Make no mistake: this is one of the world's greatest beaches! Hundreds of metres of amazing golden sand, blue shallow pools, and wonderfully sculpted sand dunes create a tropical environment that is almost mystical. Elafonissi is located in the Chania prefecture on west Crete, and you may either drive there or take the bus from Chania. It'll take approximately an hour to travel through charming tiny villages and rugged mountains, but you'll be rewarded with breathtaking beauty at the end. Elafonissi is quite popular, so expect to see a lot of people on the beach in July and August. However, if you arrive before 11 a.m. on any day, you should have no trouble obtaining a sunbed and umbrella. However, the number of sunbeds is limited in general, and there are only a few canteens with beverages and food, so you should be prepared. 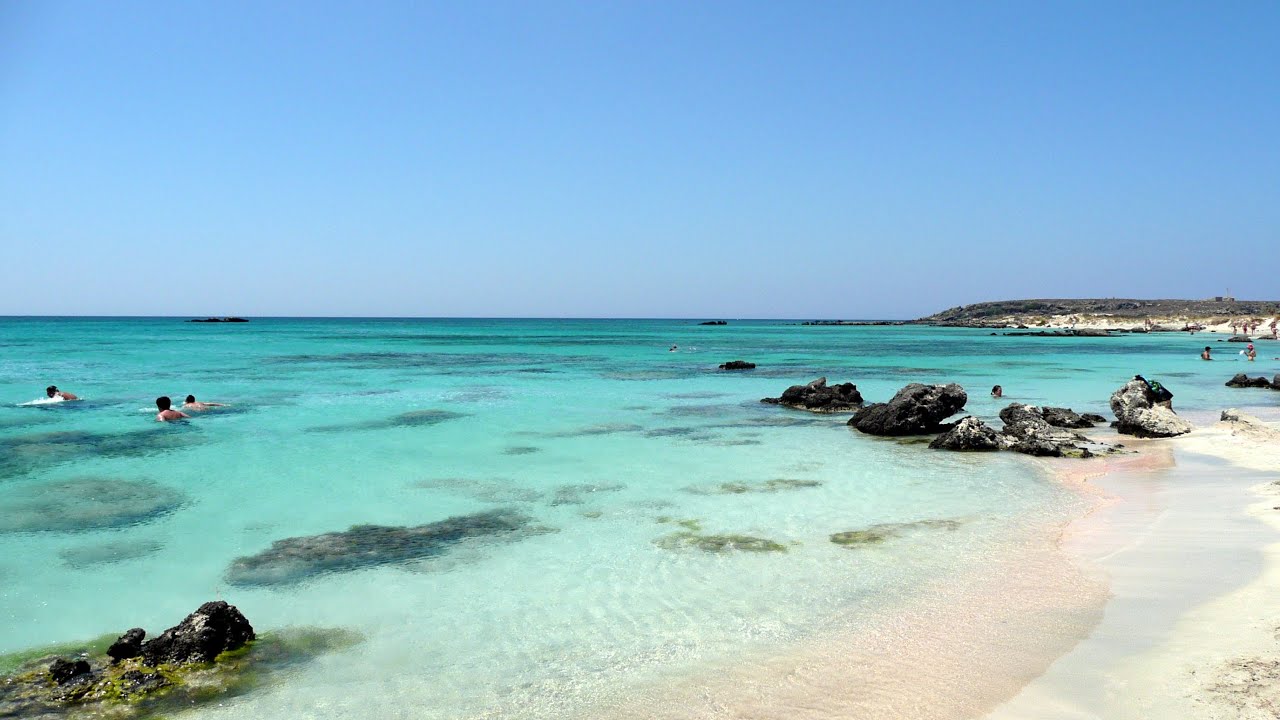 Voidokilia is one of Greece's most spectacular beaches, located in an exquisite setting in Messinia, just a few kilometres from Pylos. The bay of Voidokilia has an extraordinarily symmetrical form and is covered with fine sand. This location is home to a variety of animal species, and because it is a "Natura 2000" site, no amenities are permitted. At the same time, there are several archaeological sites nearby.

The bay of Platys Gialos beach is shielded by barren slopes scattered with cubic whitewashed homes, as is typical of a Cycladic island scenery. The beach is lined with rows of lounge chairs and sun parasols during peak season. Some beachside restaurants provide refreshments to visitors while they recline in their lounge chairs, allowing them the utmost in relaxation.

A large sandy shoreline, natural beauty, safe shallow waves, and a variety of beachfront eateries where guests may relax on nice verandas or outdoor terraces overlooking the seaside are just a few of the attractions at this popular beach. Platys Gialos is a family-friendly beach during the day, but it's known for its nightlife in the evenings. Several premium hotels with top-notch services and spectacular views of the Aegean surround the beach. 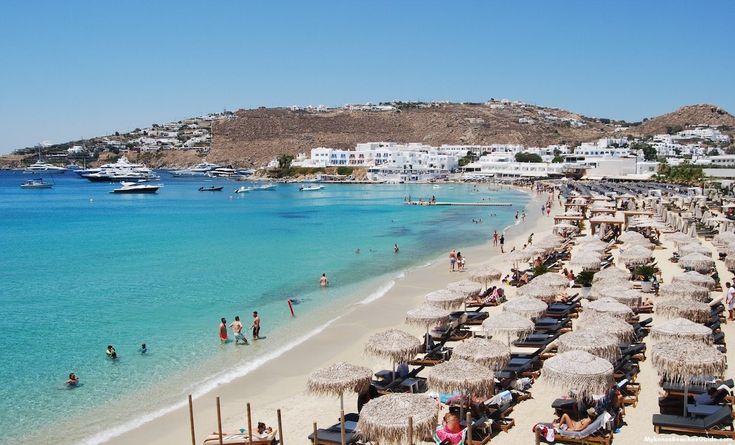 Some people sitting under umbrella and some swimming in the warer

The most renowned beach in Lefkada is Porto Katsiki, which is located on the island's southwestern side. The name of this beach translates to "goat port." A parking park and a few of beach bars are located above the spectacular bay, where visitors may enjoy the breathtaking view of the Ionian Sea. To access this white pebbled shore with the unique deep seas, visitors must descend a few stairs.

Greece is well-known for its beautiful coastlines and scenery. Myrtos Beach on the island of Kefalonia is undoubtedly one of Greece's most beautiful beaches. Its incredible, crystal pure seas in bright and deep blue are breathtaking. Every year, the Blue Flag is granted to Myrtos Beach, one of the most well-known green certifications in the world, given to beaches and marinas that fulfil and maintain the highest environmental, sustainability, and safety standards. The fact that the water grows deep just a few feet from the shore is one of the unique features of Myrtos beach. 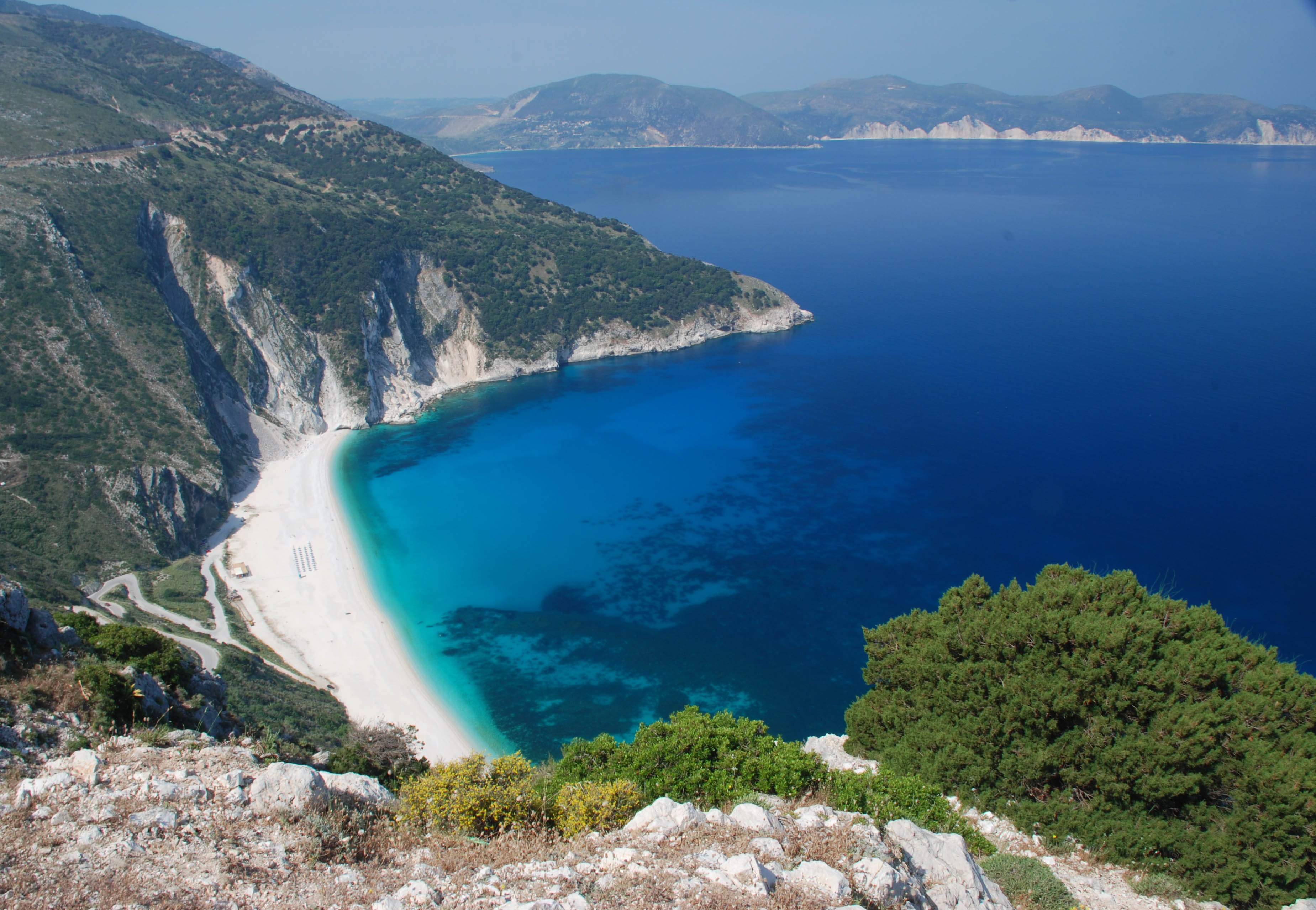 Water with green mountains around it

Naxos is unquestionably one of Greece's best-kept secrets. Plaka, with its sparkling white sands bordered by crystal-clear seas in a dreamlike shade of aquamarine, is one of the country's most attractive beaches. Because the island doesn't get nearly as many tourists as its famed neighbours, Mykonos and Santorini, it's simple to pick your own beautiful stretch for a blanket. When you're ready for a break, there are lots of restaurants serving delightful local cuisine, such as scrumptious island cheeses and fresh seafood.

Sarakiniko is a small cove on the north side of Milos, the isle where the famous statue "Venus de Milo" was discovered. It is surrounded by soft white volcanic rocks that have been sculpted into intriguing shapes over time by the elements, while crystal clear waters in a variety of greens and blues sit at its edge. They're peaceful and shallow, perfect for swimming, and the smooth rocks are wonderful for laying down a towel and soaking up the sun. The island itself is a fantastic location in the western Cyclades for those looking for a more real taste of Greece and its stunning natural beauty without the crowds and exorbitant expenses. 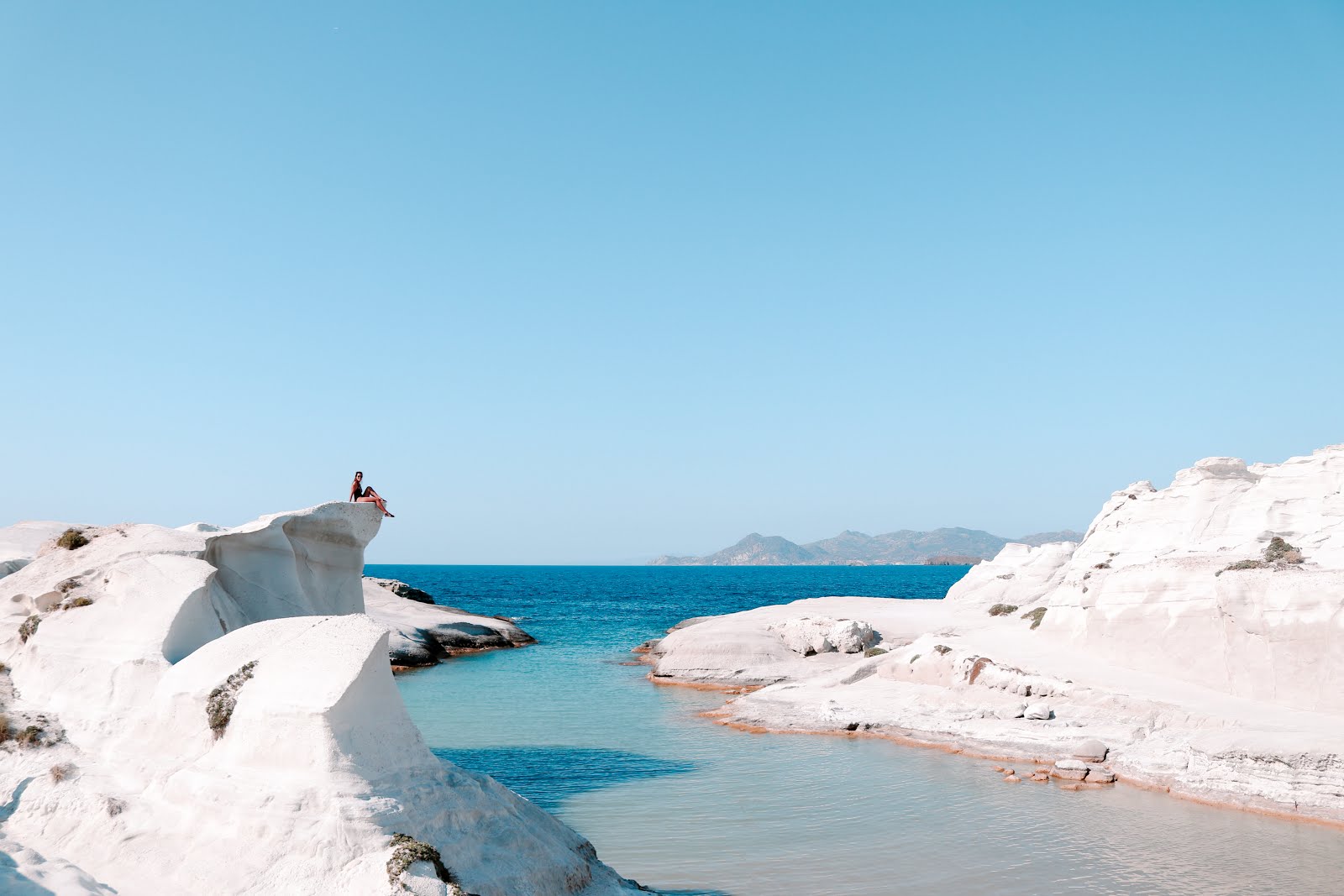 Are There Private Beaches In Greece

Greek beaches are a public good, according to the Greek constitution, and cannot be exploited by a single individual or organisation. In Greece, there are no private beaches. Even if a hotel is directly on the beach, it is required to provide beachgoers unrestricted access, even if the hotel is the only way to get to the beach.

Are Beaches In Greece Warm

The ideal time to visit Greece is determined by several factors other than the weather. When determining when to travel, keep in mind the type of vacation you want, as well as the crowds, festivals, events, and pricing. If you visit at the right time and in the right spot, Greece can be lovely all year. The winter months in the country's northern areas may be brutal. Winter on the southern Greek islands, such as Crete, is often pleasant, sunny, and warm. You may have all of Greece's greatest beaches to yourself! Although it is still frigid on the mainland, islands such as Crete, Santorini, and Rhodes have been bathing in the sun since mid-April. After a long winter, the sea around the southern Greek Islands has finally warmed up enough to swim in. 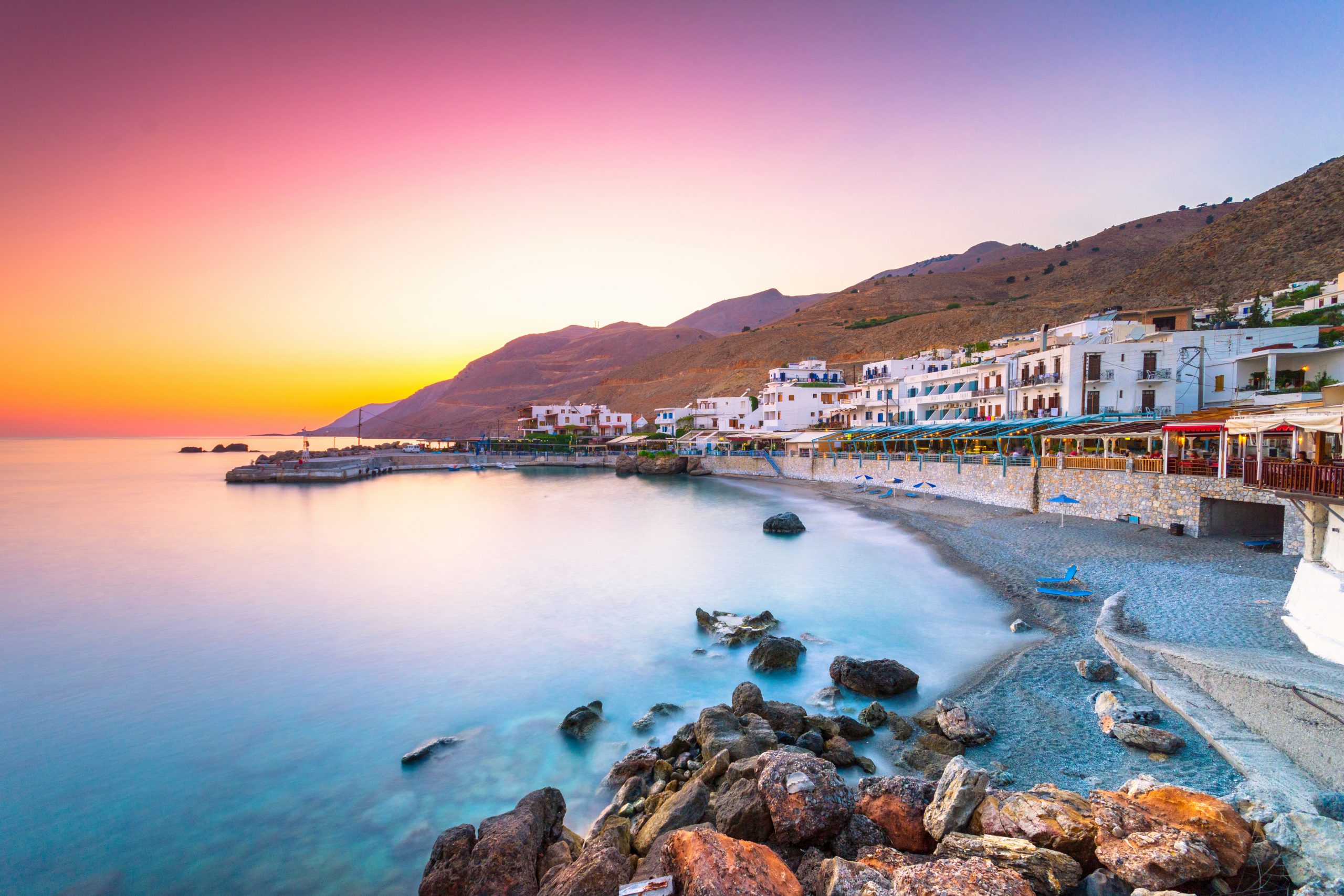 Sunset behind the island in greece

These are not just the best Greece Beaches, but they are also among the best Greek islands overall. To be really honest, there are a few excellent beaches on practically every Greek island, but these are the very finest!