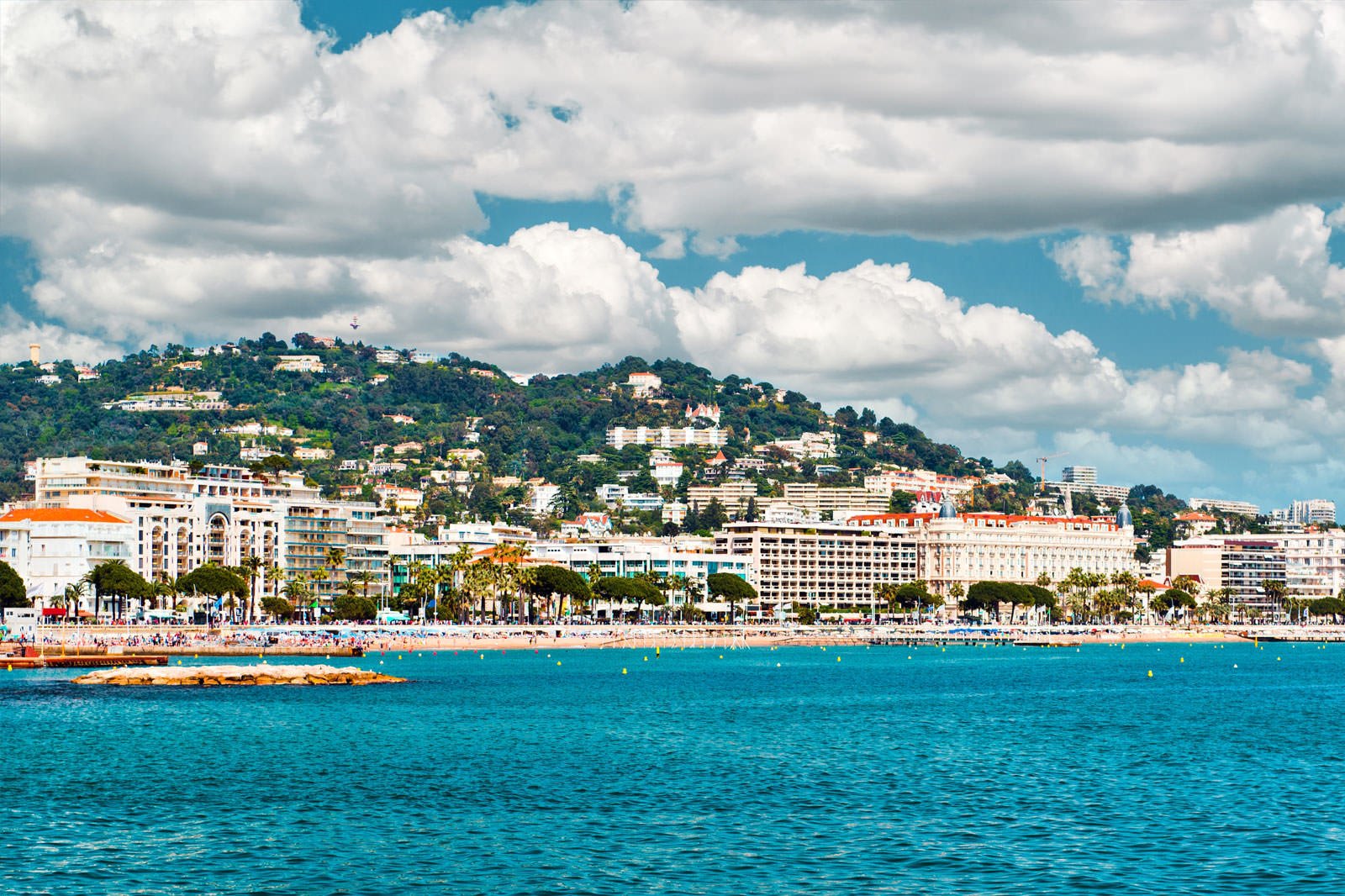 Granted, it’s much smaller than Nice, but Cannes positively gleams on the surface just like when you see it in Cannes pictures. In fact, there are few city promenades more dazzling than La Croisette. Since British aristocrats rolled into what was then a tiny fishing village in the 1830s, the place has been fashioning itself in the image of the fashionable. More recently, its real achievement has been to spin out across the whole year the sparkle generated by the world’s most notable film festival.

Of course, the bay is glorious and there are sandy beaches – but what sets Cannes apart is the shiny veneer with which it has coated these elements. Thus is the international-class collection of palace hotels kept turning over happily. The ambitious boutiques, too. And so the story of a modest little town in the South of France continues to hold the world’s attention.

Does Cannes Have Nice Beaches?

It is possible to separate the beaches of Cannes into two categories: public and private, and both are equally lovely in their own way. There are many of facilities available at private beach clubs, including lockers, sun loungers, and waiter service, and they are located closest to La Croisette, the city's major avenue. They do, however, come at a price. Some of the public areas are natural and more simple in nature, although some are also near to bathrooms and restaurants.

Are There Beaches In Cannes?

The coastline of Cannes proper can be divided into five distinct beach zones: Gazagnaire, which is the furthest east; Port Canto, which is near the port of the same name; La Croisette, which contains the majority of the hotels; Boulevard de Midi, which is west of the town center; and La Bocca, which is located in a residential neighborhood in the far westernmost part of the city. Despite the fact that La Croisette has the least amount of land dedicated to public beaches and the most costly beach restaurants, each zone contains a mix of public and private beaches. The water quality is typically excellent throughout the majority of Cannes beaches, with the exception of those immediately near to the ports, which see periodic drops in cleanliness. 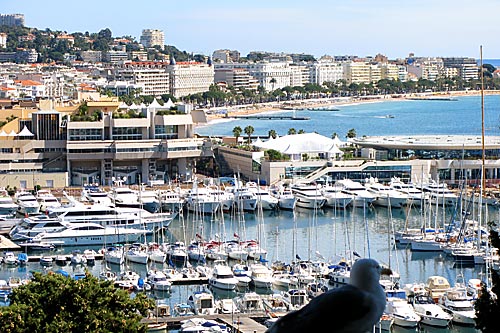 The historic port, new yachts, Casino and Cannes Festival Hall (middleground), and La Croisette promenade dotted with beaches are all seen from Le Suquet hill. This is Cannes' greatest view, and it includes all the city has to offer, including the sight of a slew of mega-yachts, the glittering bling of which can also be viewed up close if you go along the quay near the Casino. The hill also contains the Musée de la Castre, a jumble of artistic oddities that have accumulated over time.

Cannes is a small seaside city with historical charm, a memorable name, and sandy beaches (as opposed to Nice's stoney offering), but aside from the beautifully maintained and tranquil coastal area, Cannes is generally overrun with bad architecture, overpriced tourist tat, and obnoxious, self-important foreign residents. 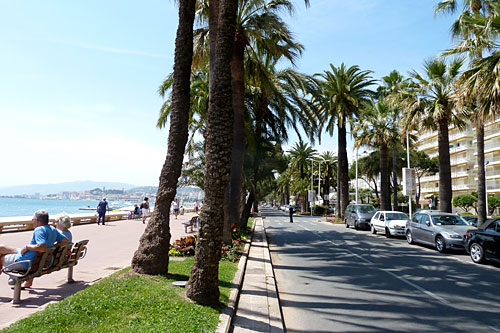 La Croisette, on the other hand, is a fantastic, low-traffic area to work the legs and the eyes, with waddling, short-pants visitors contrasting interestingly with slender, jewel-encrusted, toy-boy-toting socialites in a setting of palms, flowers, and the occasional slow-cruising Lamborghini. 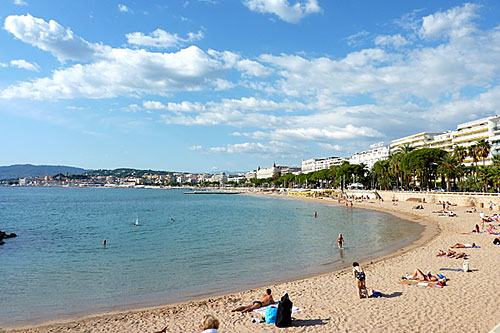 Cannes Festival Week in May is not a suitable time for visitors to visit because the weather is usually unpredictable, areas of La Croisette are blocked to non-passholders, and the stars only appear at night. 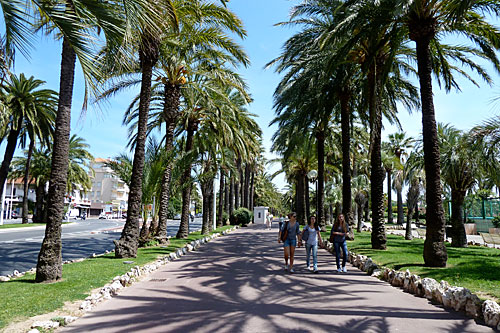 The promenade continues east across the Plage de la Croisette and around a couple of marinas before joining some very small sand strips that lead to Antibes. 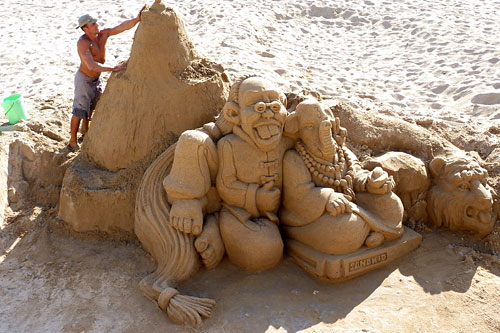 Cannes beach sand sculpture with a man working on it

Construction work is being done on the beach near the Festival Hall on a daily basis. We prefer this image over one of the Stalinist monster that is the Palais des Festivals and its film-star stairway. 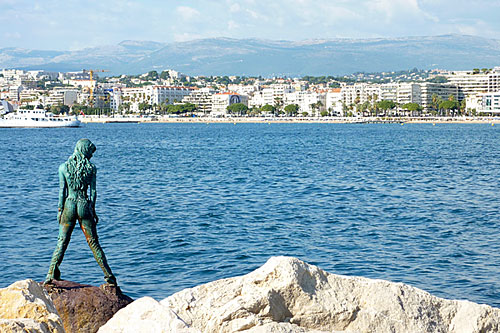 Cannes bay with a statue of a naked girl and building

Windsurfing and parascending are frequently on offer for those who prefer a little exercise to work off lunch, as opposed to an afternoon scorching on a sun lounger, along with bouncing banana boat excursions for the youngsters, or whatever the next wacky maritime activity is hot. 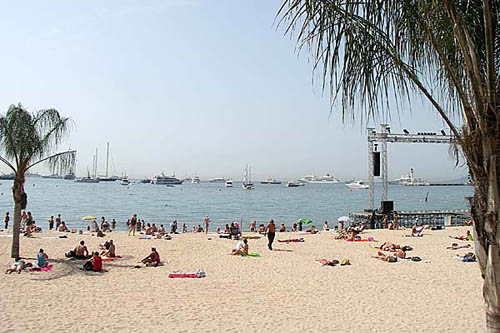 Another of the few sandy strands in Cannes Bay (with a temporary events stage), however, there's a long, nice though small beach around the point to the west, Plage du Midi, which is an easy 10-minute walk from La Croisette. In July and August, Cannes hosts the Festival d'Art Pyrotechnique, a fantastic series of free firework performances offshore.

Inland from the shore Cannes town is a hugga-mugga of convoluted alleys and unattractive apartment complexes, but it does provide affordable (if you so choose) cafes and occasional flashes of flair. Away from the beach, the most fashionable region is Le Suquet hill, to the right of the viewpoint shown below, where the serpentine lanes of the Old Town are home to a slew of small cafés and restaurants. 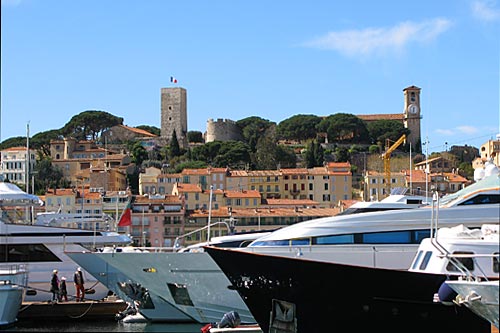 On the other side of Le Suquet, heading west, are more small beaches, some occupied by pay loungers and beach cafés popular with locals because they serve better food at lower prices in a more relaxed atmosphere than La Croisette options - and, for that matter, better than Nice beach restaurants as well.

When the glamorous Cannes Film Festival takes place in May and celebs pose on the red carpet in tuxedos and full-length dresses, the camera flashes shoot off in every direction. But the flash and glam don't stop there. Throughout the year, when you stroll through the luxury bars, couture boutiques, and palaces of La Croisette, the riches and glitter of this city will not fail to wow you with its abundance. On the stylish sunlounger-striped beaches and liner-sized yachts docked at the harbor, admiring Ferraris and Porsches, as well as spotting celebrities, are constant Cannes diversions. You will see the beauty of Cannes even in Cannes pictures.