Portugal Beaches - You'll Be Sorry If You Don't Visit Them 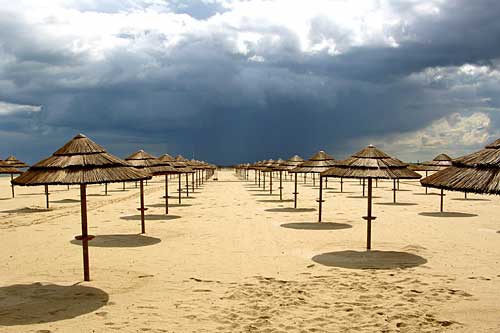 This collection of Portugal Beaches information and photographs is concentrated on the Algarve, on the country's south coast, because the weather is more consistently sunny, the water is calmer, and the general infrastructure is more geared toward foreign tourists, which is where the majority of visitors to these pages will be heading. Choose your beach from the list below.

As is customary, we are not attempting to photograph every beach, but rather to offer a sense of what to expect if you travel that way. 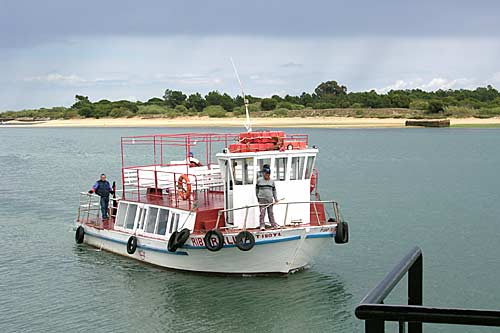 Ilha de Tavira is the island behind the ferry. Massive beaches are hidden behind foliage.

Tavira is a tranquil, lovely river town with ancient bridges, terracotta tiles, 16th-century palaces, churches (naturally, this is Portugal), fishing boats, and bars, albeit there are few significant attractions here-the castle ruins, for example, are barely worth 15 minutes.

Ilha de Tavira's expansive beach and camp site are located 2 kilometers from the road and 100 meters from the water, accessible via frequent, low-cost ferries. Throughout the summer, there are numerous cafés and water sports facilities open.

Tavira's tourism is limited and largely unpackaged, making it a great alternative for individuals who want to roast on a beach during the day yet return to a more ethnic environment in the evening. 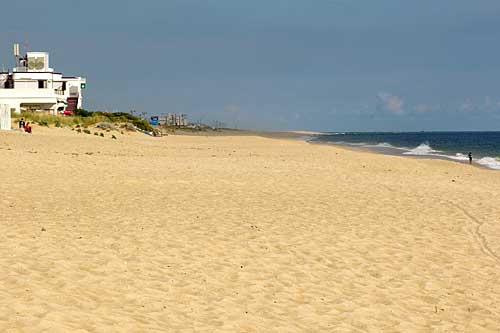 Although there are numerous direct international flights to Faro, this is not a popular tourist destination. The small old town is charming enough, with its typical Moorish walls, churches, and forgettable mansions; however, the bone room [Capela dos Ossos] in Nossa Senhora do Carmo is fascinating and causes much mortal reflection.

Portugal's beaches, from Faro to Tavira in the eastern Algarve, are essentially massive sandbanks accessible only by a short boat journey, with the exception of this one, Praia de Faro, which features a little bridge for sand snugglers and the wealthy few who actually live on the sandbank.

The major disadvantage of Praia de Faro is its proximity to the airport, which is a long and difficult walk from Faro's tourist center unless you rent a car.

Still, once there, the sand is soft and the area is quite spacious. 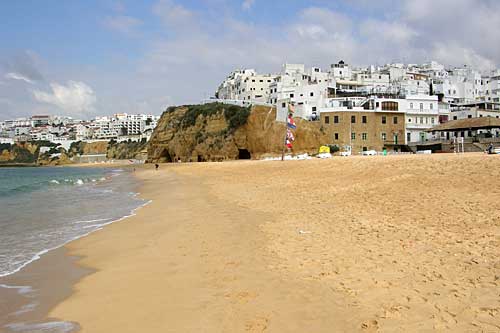 Albufeira beach, a large, soft, and surrounded by stunning scenery

Albufeira beach is large, soft, and surrounded by stunning scenery, but what lies beneath the lovely face?

This is Portugal's Torremolinos, a town dedicated to providing everything a downmarket punter could wish for, from eggs and bacon for breakfast [that's got to be an improvement on the customary roll and jam!] to big-screen football with fish and chips for dinner. Albufeira is a place to party hard at a reasonable price and stuff the foreign ways, though the tight pedestrian streets do feature some indigenous architecture and charm, which is more than competitor Portimao can say.

Cultural? Certainly not. educational? No. fascinating? Vibrant and reasonably priced? Yes. Are there any good beaches? Yes. However, 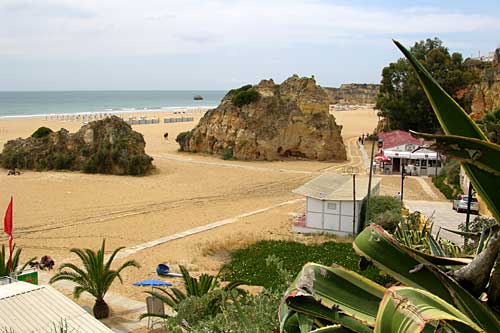 Portimao's enormous, spectacular beach is part of it. Regrettably, the hinterland is dominated by high-rises.

The Portimao beaches are fantastic, but they have become package hotel territory in recent years.

This harbor town was fought for in prior incarnations by Phoenicians, Greeks, Romans, Christians, and Moors. Then, in 1755, the massive quake that leveled Lisbon did the same for this area, spurring its subsequent rebirth as a major fishing port.

It stayed so until relatively recently, when developers entered and built a hundred high-rise hotels all at once along the seaside strip. It's now solid gold, pack-man territory, an upscale Albufeira with an even less authentic Portuguese style; like, er, zero.

Next door, Praia da Rocha is the most well-known surfer beach on the Algarve's south coast. 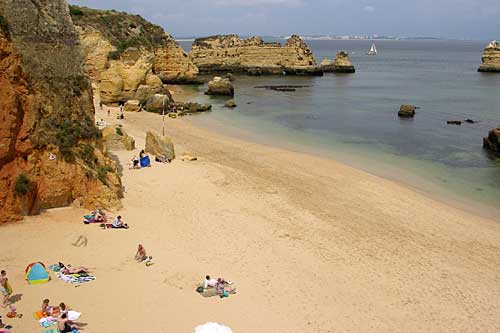 Dona Ana beach is located a few kilometers from Lagos.

Lagos is without a doubt the most interesting town on Portugal's Algarve coast, featuring not only fantastic beaches but also a rich history and a charming town with a diverse selection of stylish cafés and restaurants.

Lagos' accessible and well-defended river port was battled over by Phoenicians, Greeks, Romans, and Moors, all of whom left their stamp in the form of enormous town walls. Later, Lagos served as a base for the country's historic "Age of Discoveries" naval era of world domination.

Lagos was the site of the first sale of black slaves to Europeans in 1444 and quickly developed into a major slave trafficking port, expanding in strength and stature until the great quake of 1755 destroyed their military pretensions and barbarous commerce.

Just east of town is the area's largest beach, Meia Praia, which is brimming with everything a beach bum could want, while to the south is a cluster of adorable coves backed by ochre cliffs pocked with caves and grottos, including Dona Ana, pictured above.

In general, the sea in the Algarve is cool and occasionally choppy, while the west coast is virtually always a little rough. Surfers and serious windsurfers will gravitate toward the west shore.

Portuguese beaches are large and gorgeous, but the waters are not as safe as those of the Mediterranean due to the Atlantic's strength, particularly on Portugal's surf-friendly west coast.

Three parents drowned in a whirlpool off Tonel beach on Portugal's Atlantic coast in October 2007.

Whirlpools are an extreme example of harmful currents, but they should be treated similarly to any undertow-sometimes known as a rip; they rarely take anyone down, simply around and around.

While monster waves are immediately visible, the tremendous undertow-also known as a rip-that cycles water back to the ocean can easily pull a swimmer out with it and is completely imperceptible to the untrained eye. Resisting is pointless.

Parents are urged to exercise caution when visiting new beaches. Beaches patrolled by lifeguards often identify safe swimming areas, which may be limited and busy, in contrast to surf zones, which may appear uncrowded yet conceal dangerous rips. The majority of surfers are excellent swimmers who understand how to avoid rips and, of course, have a board to hold onto.

After September, the swimming season in Portugal is deemed closed, which means that lifeguards will be absent and safety flags will not be flown, even if the conditions are unsafe. If you intend to swim, possibly in a wetsuit, proceed with extreme caution. Consult with locals, particularly surfers, about safety, and keep an eye on children.

What to do if you become entangled in a rip: DO NOT FREAK OUT. Desperate and tiring thrashing is the killer, as rips, particularly the whirlpool variety, rarely bring swimmers under. If you fight the river, you will quickly become weary and may lose your ability to keep your head above water.

Rips do not flow eternally; they lose their strength after around 5–40 meters, which may seem like a long distance when you're stranded, but just go with the flow. When the drag eases, swim parallel to the beach, away from the rip, and then return safely.

Alternatively, wave a hand calmly and request assistance, perhaps from a surfer.