When To Visit Iceland? The Land Of Fire And Ice 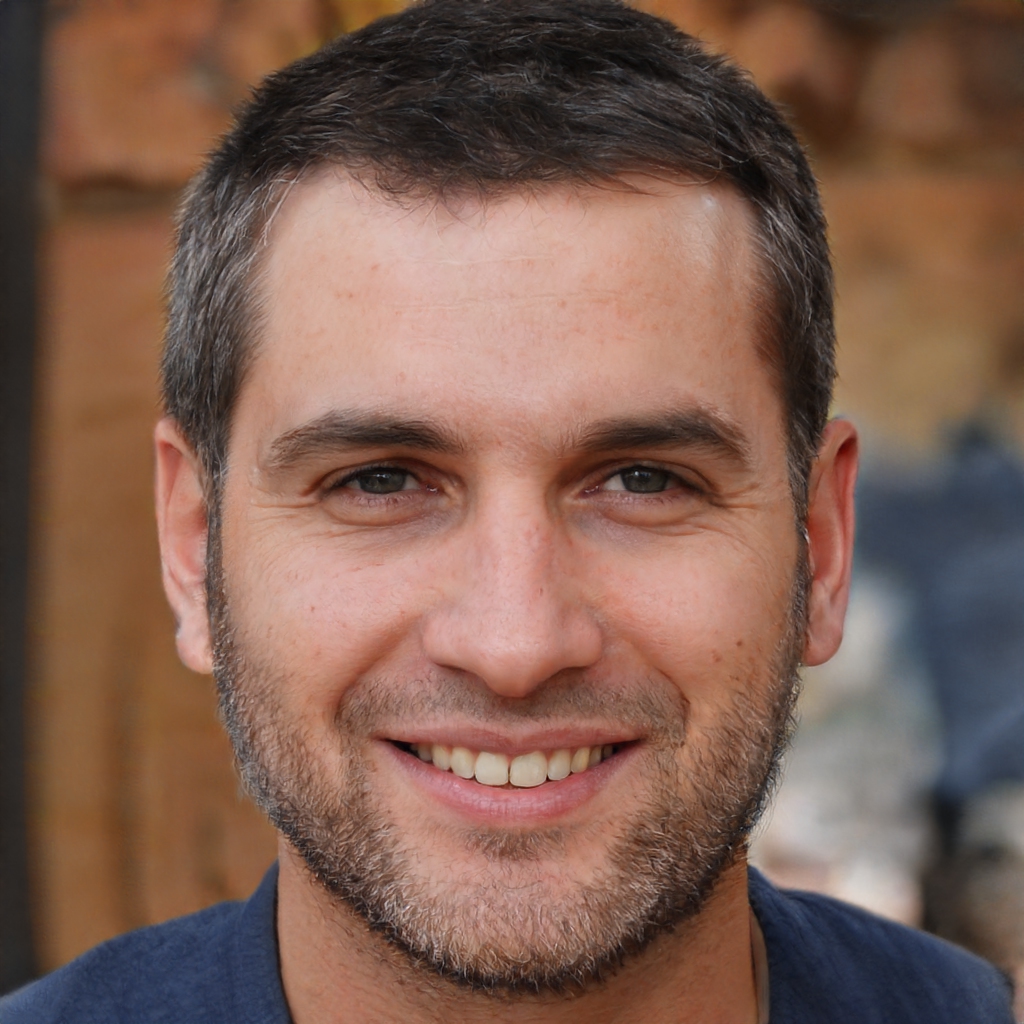 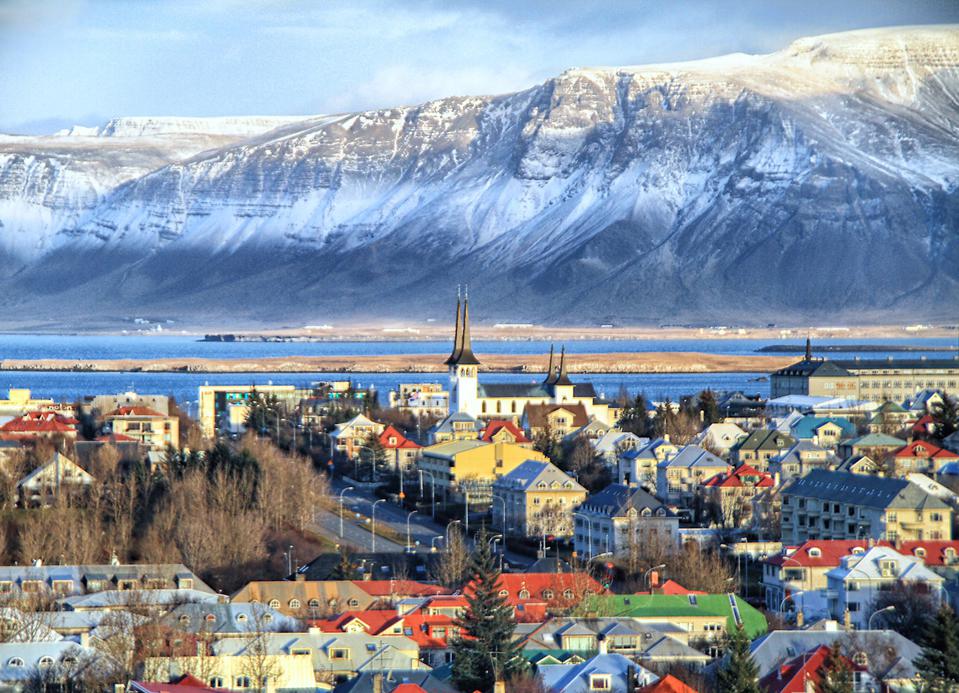 Are you wondering when to visit iceland? It is not a surprise for people to get curious. Iceland is not like any other destinations you have been to.

Weird as it may seem, but this place is a country where the natural elements dance between the poles of fire and cold, with eternal winter nights and summers where the sun never sets.

It is definitely a world of sharp contrasts. It's a stunningly beautiful island with rivers running across deserts and hot lava erupting from ice. So going here for a trip requires research and planning. 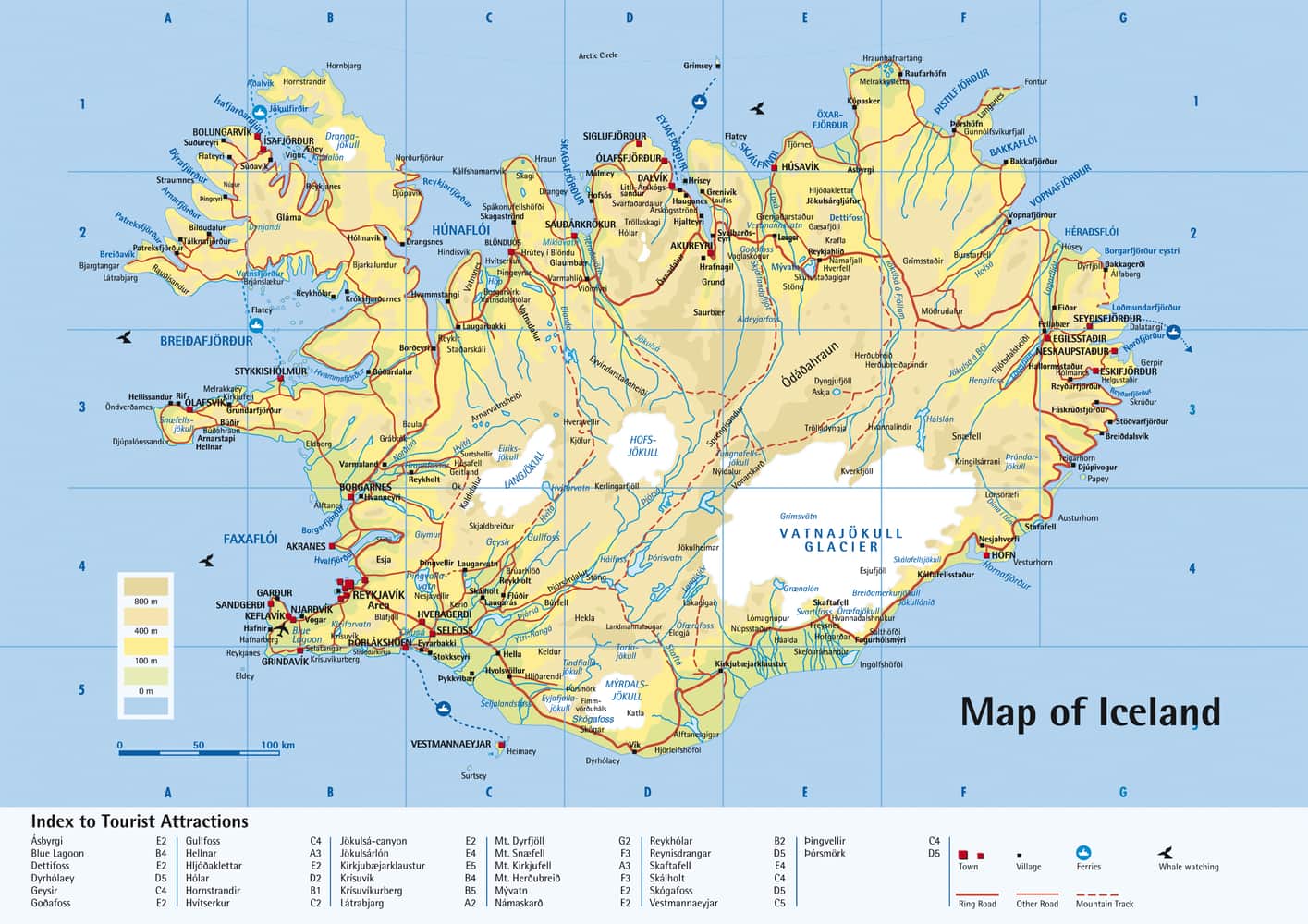 Iceland Map with its detailed info of its territories

There are roughly 30 tiny islands in Iceland, including the sparsely populated Grmsey and the Vestmannaeyjar archipelago.

Iceland is geographically, historically, politically, culturally, linguistically, and practically included in Europe. The island has geologically significant portions of both continental plates.

The nearest section of Continental Europe is mainland Norway, which is around 970 kilometers (600 miles) distant, whereas mainland North America is approximately 2,070 kilometers (1,290 miles) away, at the northern edge of Labrador.

Iceland is a Nordic island republic in the North Atlantic Ocean with the fewest people in Europe. Reykjavik, Iceland's capital and largest city, is home to more than 65 percent of the country's population (together with its surrounding territories).

Iceland is the only segment of the Mid-Atlantic Ridge that rises above sea level, and its central volcanic plateau erupts nearly every day.

The interior is characterized by a plateau with sand and lava fields, mountains, and glaciers, with several glacial rivers flowing to the sea through the lowlands.

Despite its high latitude close outside the Arctic Circle, Iceland boasts a mild climate due to the Gulf Stream. Summers are cool due to its high latitude and marine influence, and most of its islands have a polar climate.

Spring in Iceland could be the answer. The snow begins to melt as the days lengthen, revealing Iceland's lush green scenery for the first time each year. 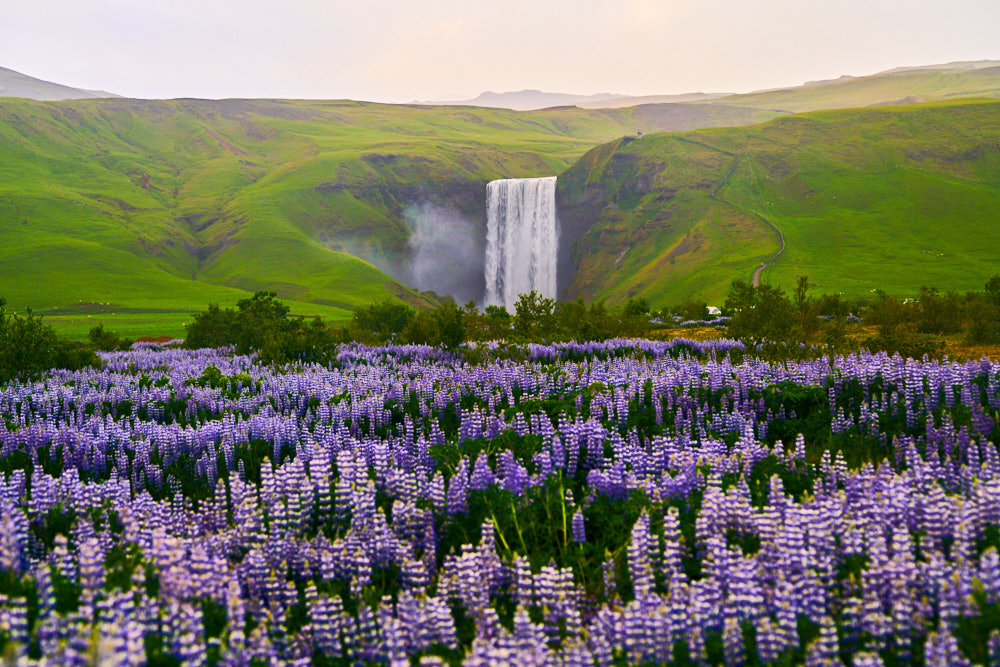 A stunning view of Iceland during spring

Spring is a contender for the best time to visit Iceland since it is shoulder season, when prices are lower and there are fewer people. However, in exchange for that privilege, expect rain, wind, and the rare bright day, as well as moderate temperatures.

You'll need a fleece, a rain jacket, and good waterproof shoes. However, there are lots of possibilities to see Iceland, beautiful light for photography, and the chance to witness puffins returning to the Iceland coast between mid April and mid August, with lambing season in full swing.

There is also a possibility to see the Northern Lights until early April, as well as to witness the intensity of Iceland's waterfalls increasing as the ice melts into the streams and rivers.

Spring is an excellent season to drive Iceland's ring road — not to be mistaken with the Golden Circle, which takes only a few hours to complete.

The Aurora Borealis is named after the Roman goddess of dawn, Aurora, and Boreas, the Greek name for the north wind. The Northern Lights can be seen shimmering brilliantly across the sky on clear, crisp winter nights in Iceland. 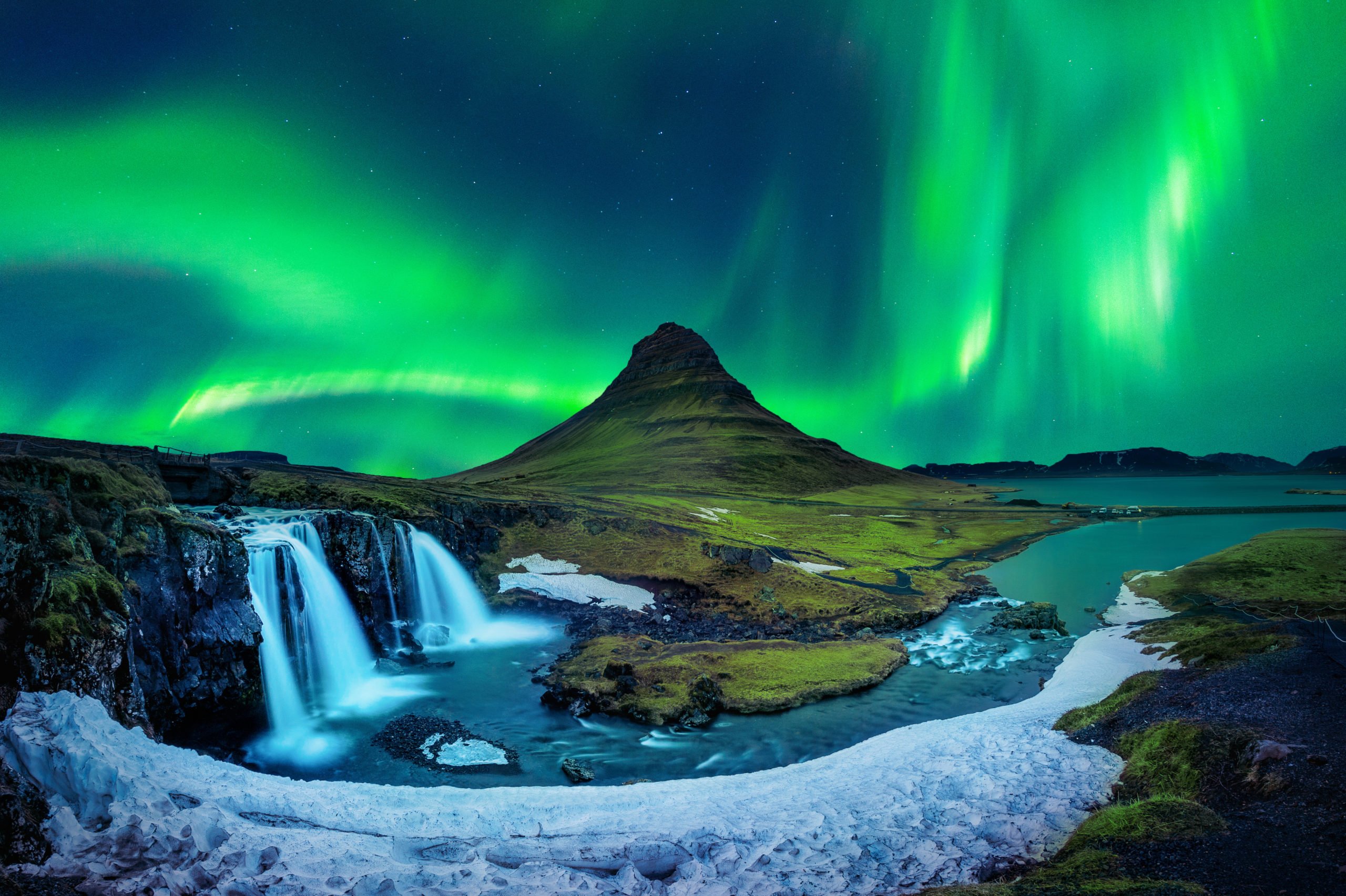 A view of Northern Lights In Iceland

Seeing this wonderful light show with different colors dancing and whirling in front of your eyes is nothing short of breathtaking, and each display is completely unique.

Some describe it as a life-changing experience. The Northern Lights are one of the biggest draws to visiting Iceland in the winter, the downside being that they are a natural phenomenon and thus elusive and unpredictable.

There must be darkness. Because Iceland is at a high latitude, there is no darkness from mid-April to mid-August. There are no Northern Lights visible during this time period.

From late August until mid-April, the Northern Lights are visible. However, from late September to late March, it is dark after 6 p.m., giving one the best possibilities. The Lights are most visible in September and March of each year. The March and September equinoxes are to blame for this pattern.

As a naturally occurring phenomena, the appearance of the Northern Lights is famously difficult to anticipate more than two hours in advance. So much is dependent on solar activity, and while we can estimate the number of sunspots that may appear on the sun, we cannot correctly anticipate when or how frequently they will appear. 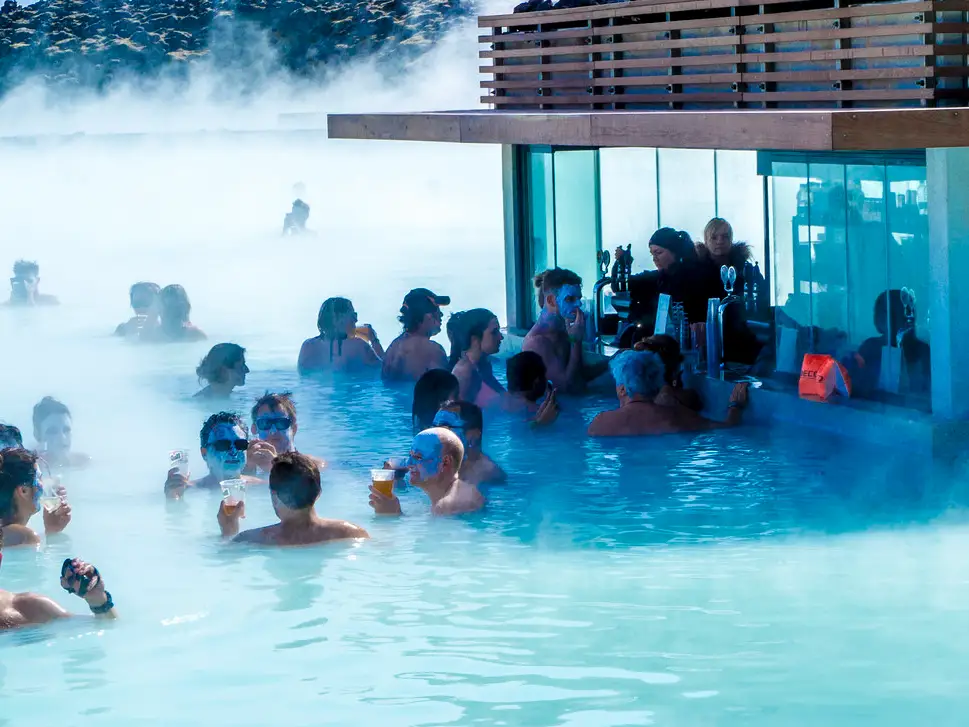 A view of Blue Lagoon In Iceland crowded with tourists

However, if you want to avoid the crowds, the warmest months of the year are by far the worst time to come.

The months of July and August see the most visitors, with popular sights such as the Blue Lagoon, Golden Circle, South Coast, and Jökulsárlón particularly crowded.

If you want to come at that time, try visiting more rural parts of the island, such as Westfjords or East Iceland, which have their own cache of fjords, panoramas, and waterfalls that are just as magnificent — if not more — than the natural treasures surrounding the city.

Top 3 Iceland To Do Things

Iceland, as the name implies, is a land characterised by icy landscapes. While some argue that Iceland isn't quite frozen enough to merit the name, the country is full of floating icebergs, sweeping glaciers, and brilliant blue ice caverns. 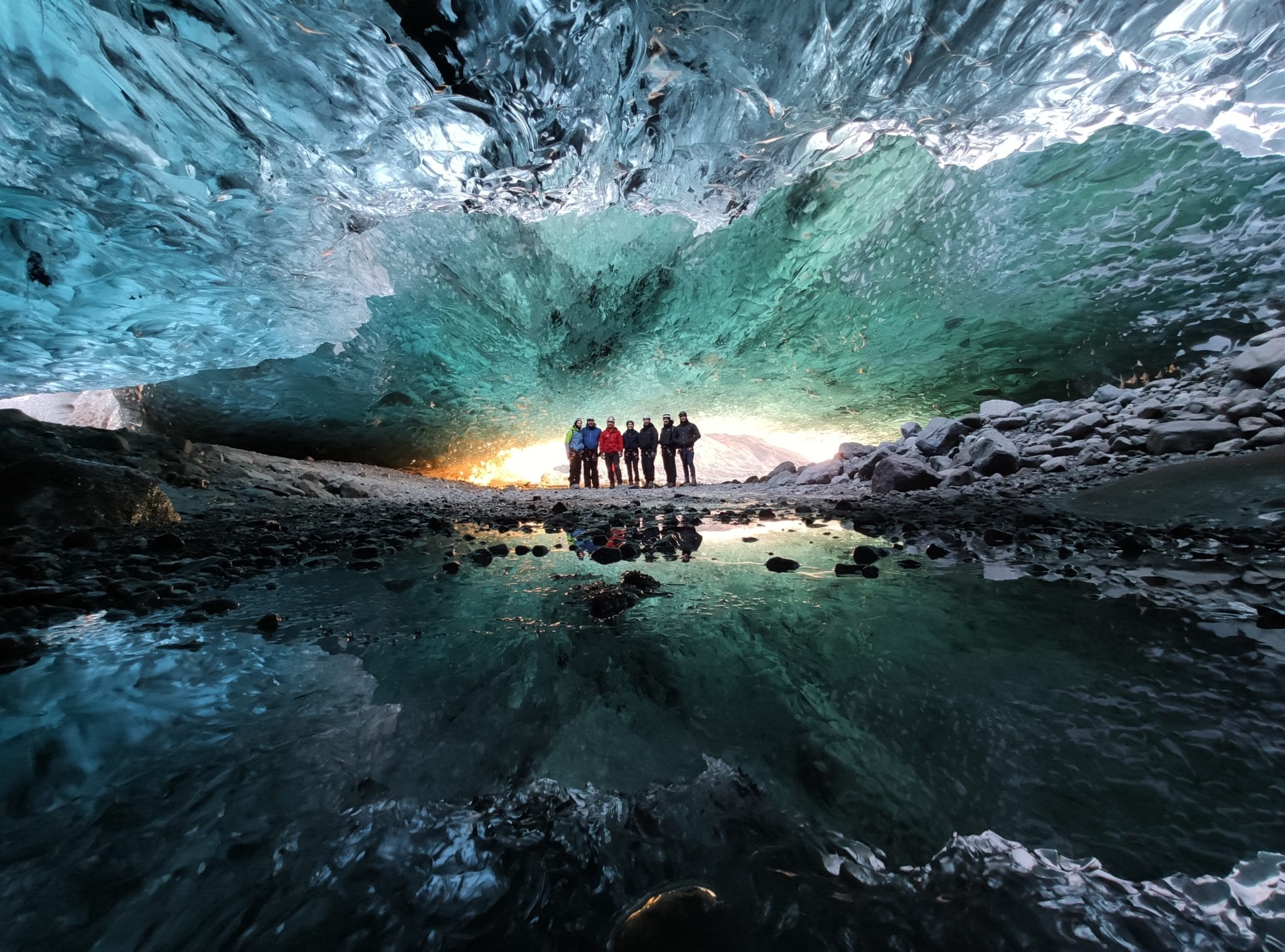 Ice Cave Glacier Adventure with some tourists inside

Having said that, most visitors are astonished to find the nation temperate and mild, at least during the summer months. However, it is during the winter when Iceland truly lives up to its name. It's a world forever caught between darkness and gleaming white snow. There are many exciting things to do in Iceland, both literally and metaphorically!

Entering one of the country's beautiful blue ice caves is the ultimate frosty experience. These, however, are only available during the winter months.

The northern lights, often known as the aurora borealis, are one of Iceland's most popular attractions. 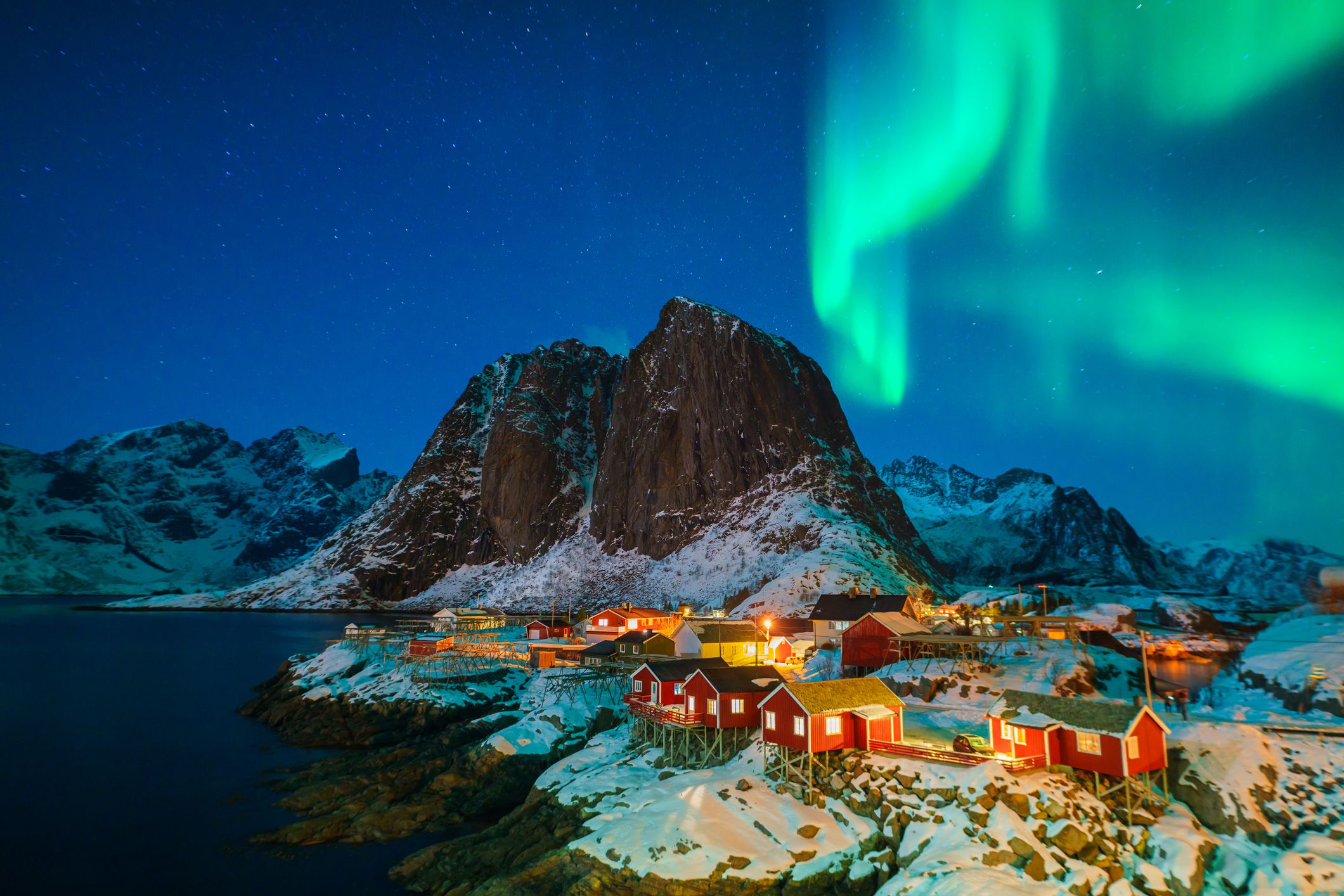 An Iceland village with northern lights on the sky

This natural light show occurs only in the winter and only in the earth's far north. This magnificent sight, with ribbon-like waves of purple, green, and gold, must be seen at least once in a lifetime.

The northern lights are notoriously difficult to see. Conditions must be virtually perfect to observe them: little or no cloud cover, flaring activity in the magnetosphere, and no light pollution.

When they do appear, no one knows when, where, or how long the lights will dance. But that is part of what makes them so popular in Iceland. Fortunately, there are several simple things you may do to increase your odds of seeing them.

Because of its medicinal silica mud, warm and calming water, picturesque surroundings, and billowing steam stacks, the Blue Lagoon is Iceland's most famous spa. It's often regarded as one of the best things to do in Iceland. 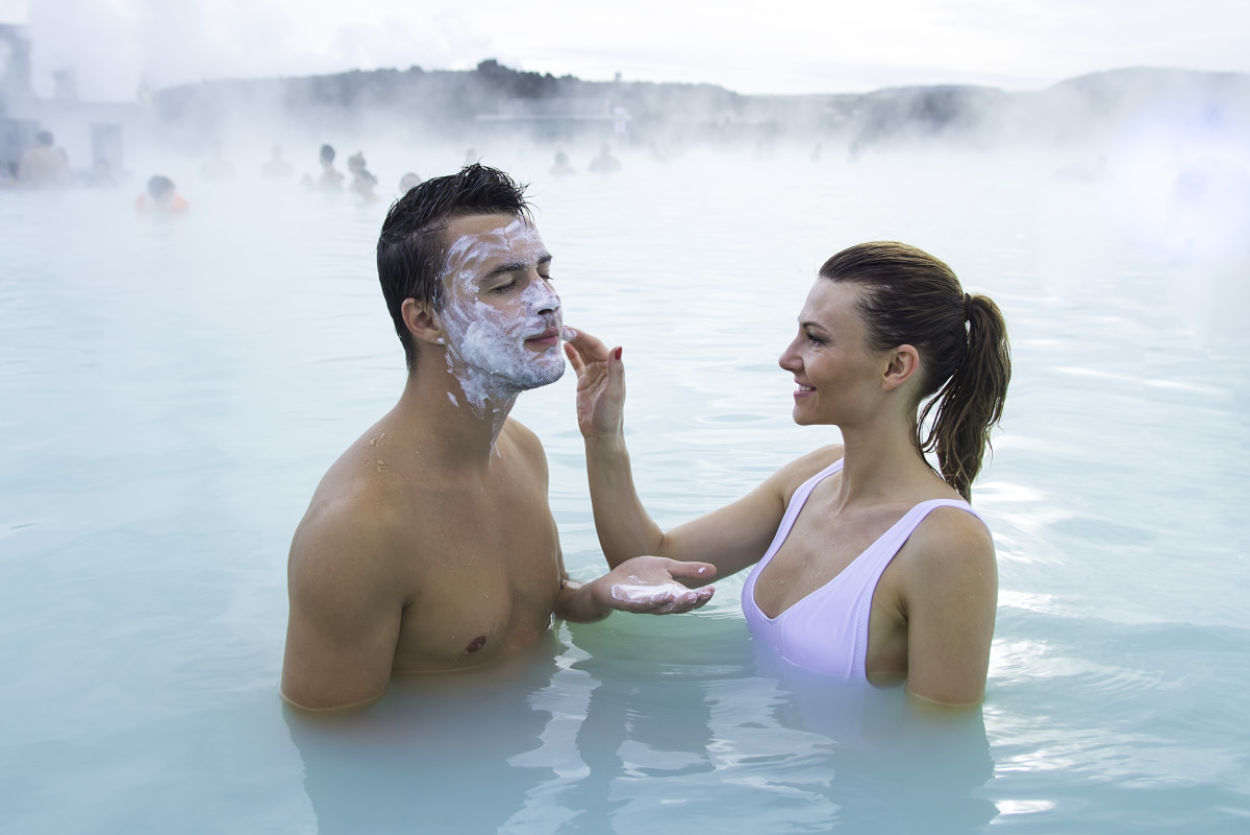 A couple in blue lagoon Iceland

Visitors with limited time in Iceland, such as a long layover, can take a fast Blue Lagoon tour or ride the shuttle bus to the Blue Lagoon.

If the Blue Lagoon is out of your price range, other spas, such as the Secret Lagoon near the Golden Circle and the Myvatn Nature Baths in North Iceland, provide similar sensations.

What Is The Best Month To Go To Iceland?

Because of the midnight sun and milder temperatures, summer (June to August) is the greatest time to visit Iceland. Hikers should plan their trips for July and August, when all trails are available. But don't dismiss winter – the greatest months to visit Iceland for the Northern Lights are February, March, September, and October.

What Is The Cheapest Month To Visit Iceland?

Iceland's off-peak season, which runs from September to November and January to May, is the most affordable time of year. Traveling during off-season months will save you money on excursions, vehicle rentals, souvenirs, and, in some situations, dinners and nights out.

Is Iceland Expensive To Visit?

Iceland is extremely pricey for tourists, but its best-kept secret is completely free. Iceland is quickly becoming one of the world's most popular tourism destinations. However, the region of the spectacular northern lights and colourful mountains also has steep prices.

Iceland has become one of Europe's "it" destinations in the last decade, as travelers have grown more exposed to the otherworldly — and very Instagrammable — vistas of ancient glaciers and jagged fjords.