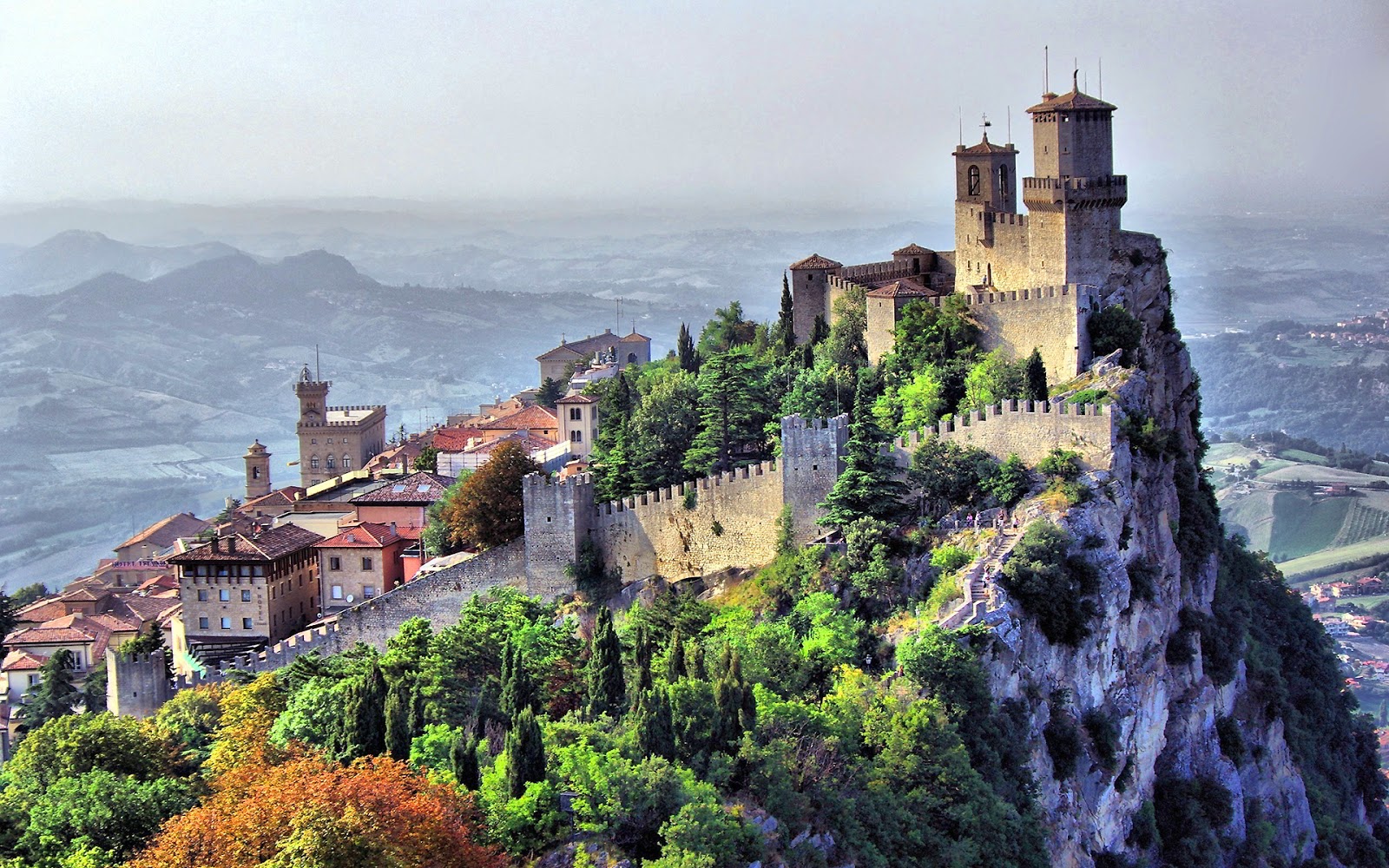 If you are curious about the best San Marino travel destination areas, then you landed to the right place.

The Republic of San Marino is claimed to be the world's oldest surviving republic. Landlocked San Marino is one of the world's smallest nations. Surrounded by Italy, it is a relic of a time when city-states flourished across Europe.

Sammarinese are citizens and residents of the Republic of San Marino. 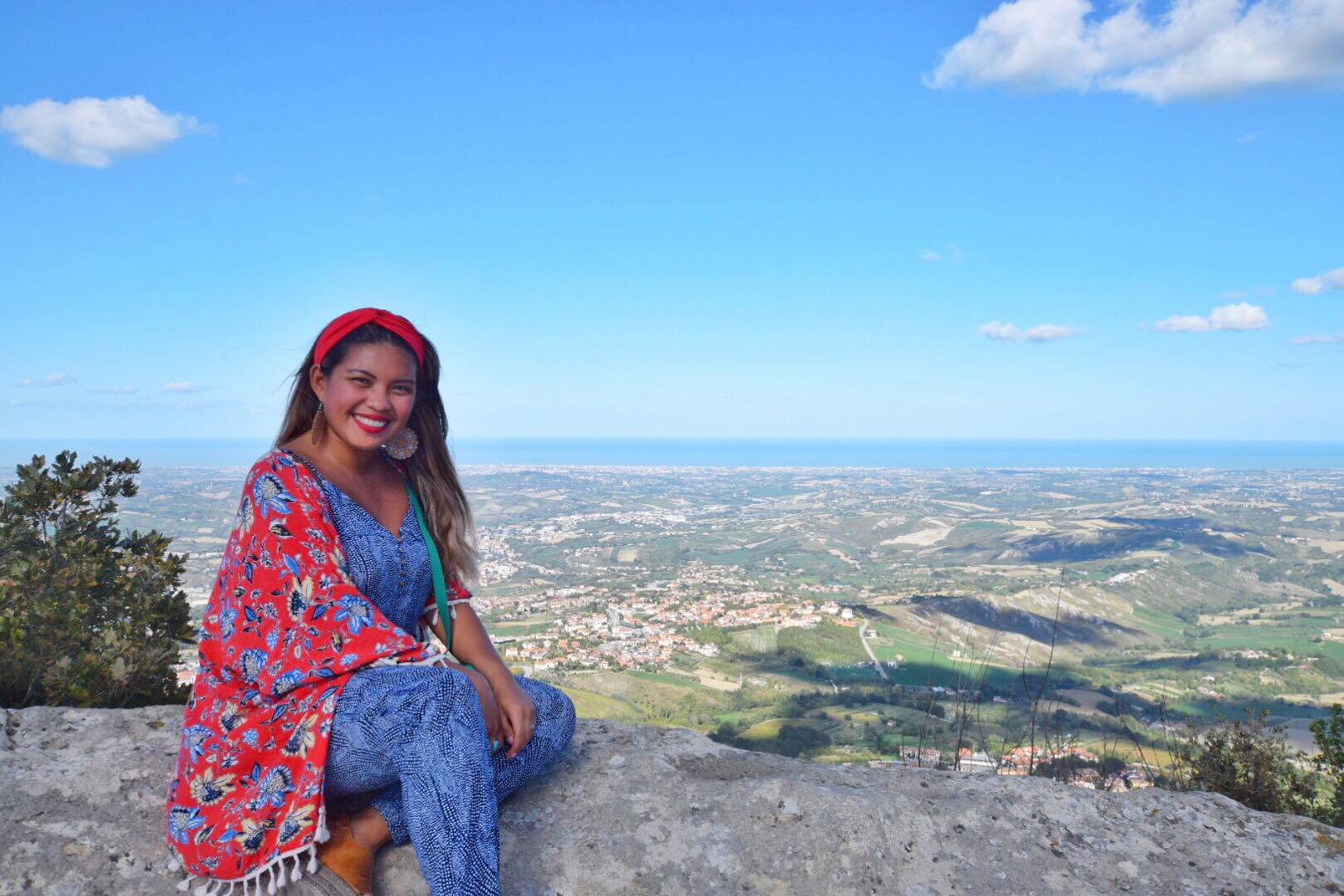 A native woman from San Marino smiling on camera

The official language of San Marino is Italian. Sammarinese, the indigenous language, is a dialect of Romagnol spoken by around 83 percent of the people.

Although San Marino has always struggled against the Holy See's political domination, the majority of Sammarinese people are Catholic, although there is no national religion.

Many official ceremonies in San Marino take place in the Basilica di San Marino, the republic's principal church, or in other churches. The Diocese of San Marino-Montefeltro is made up of nine Catholic parishes in total.

San Marino is a landlocked enclave surrounded by Italy in Southern Europe, located on the boundary between the provinces of Emilia Romagna and Marche and approximately 10 kilometers (6.21 miles) from the Adriatic coast at Rimini. 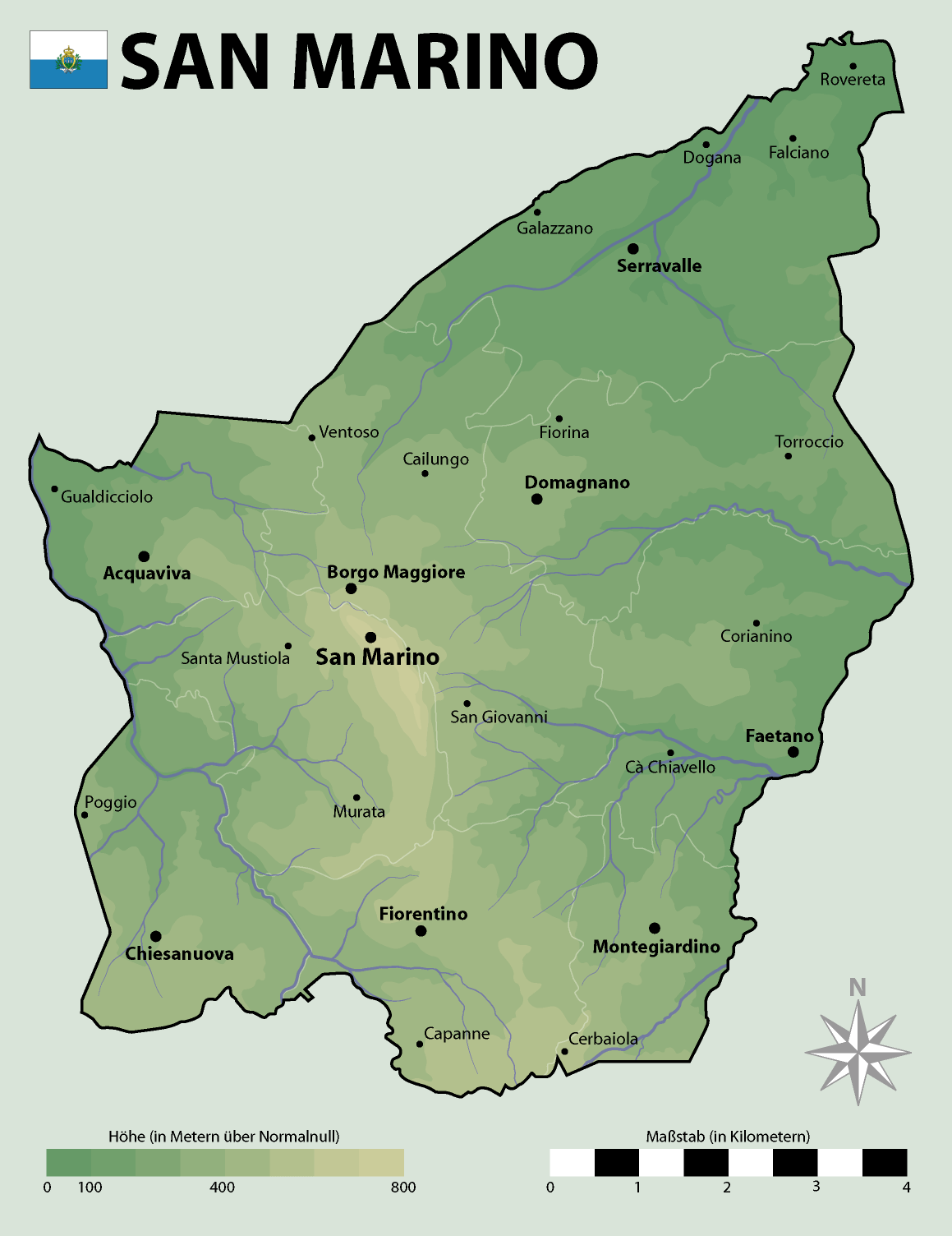 A detailed map of San marino with its main cities indicated

It is part of the Apennine mountain range and has a mountainous topology with no flat area. The peak of Monte Titano is 749 m (2,457 feet) above sea level, whereas the Ausa River (ending in the Marecchia) is 55 m. San Marino has no substantial bodies of still or confined water.

It is one of only three countries in the world that is totally surrounded by another (the others being Vatican City, also enclosed by Italy, and Lesotho, enclosed by South Africa). It is Europe's third smallest country, after Vatican City and Monaco, and the world's fifth smallest.

San Marino's territory includes the terrestrial ecoregion of Italian sclerophyllous and semi-deciduous woods. The country had a mean score of 0.01/10 on the 2019 Forest Landscape Integrity Index, placing it lowest out of 172 countries worldwide.

San Marino is the smallest republic in the world but it punches well above its weight when it comes to castles, quirk and epic views. Check out the things to do on a day trip to San Marino.

The San Marino fortifications must be a highlight to anyone going on a trip to San Marino. 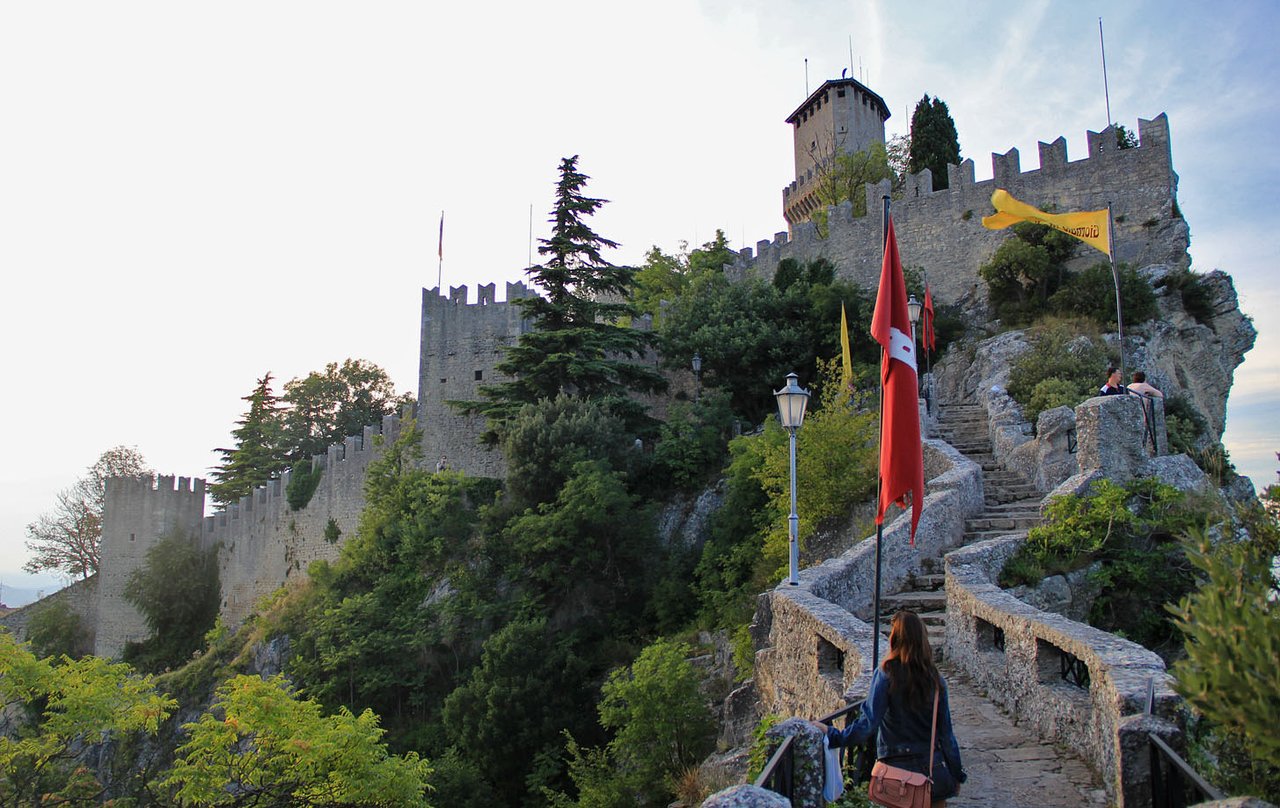 Some tourists walking at Guaita tower in San marino

Turreted, castellated fairytale turrets towering skywards into the bluest of skies, linked by a serpentine walkway that runs the length of the mountain's ridge.

The towers were designed to safeguard the minor state from the Malatesta dynasty of Emilia Romagna. Guaita, the city's first and oldest tower, is surrounded by two rounds of city walls, one of which can be traversed. Until the 1970s, the tower housed prisoners.

San Marino's historic town center is worth exploring, although the streets are steep, therefore flat shoes are recommended. The medieval stone walls surround the old town, which is mostly closed to traffic.

There are numerous stores, cafes, and restaurants. You might wish to pay a visit to the terrible Torture MuseumDuty-Free Shopping

San Marino's old center is filled with inviting cafes, street artists, and businesses selling purses, clothing, and ceramics. Banks abound, perhaps because San Marino, with a population of only 30,000 people, is one of the wealthiest countries per capita. 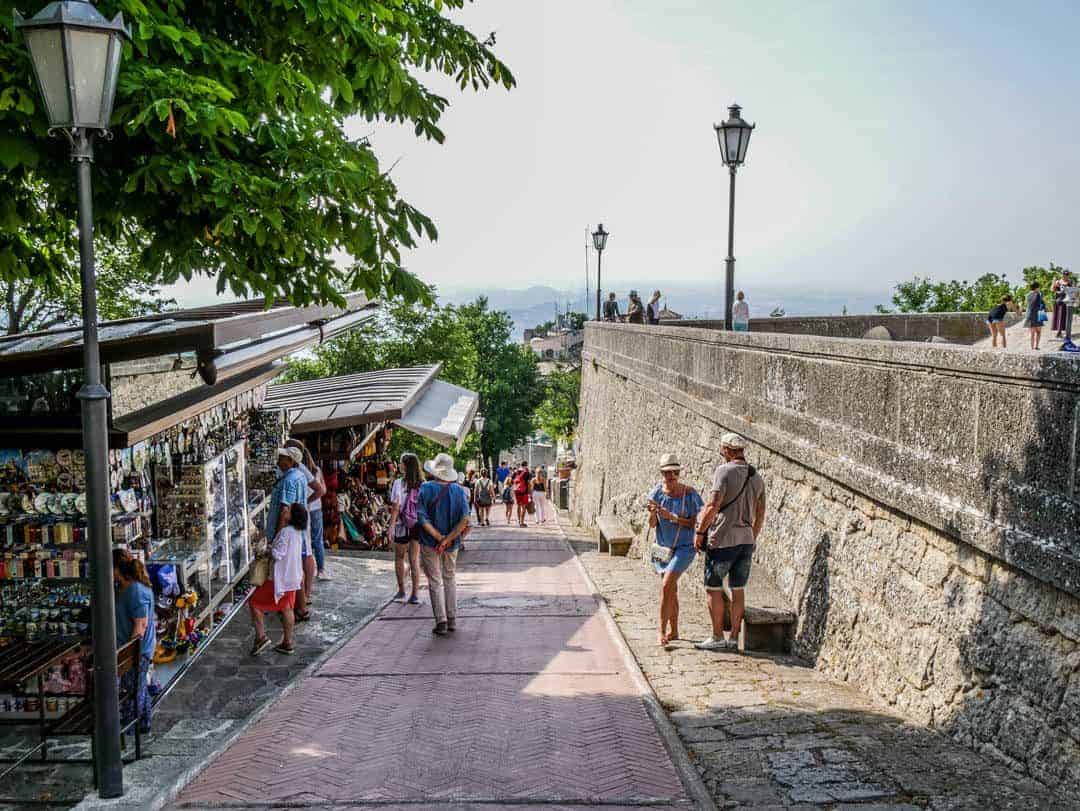 Because many things are tax-free, San Marino shopping attracts bargain-hunting tourists. It may shock you as well to see many shops selling fake firearms and weapons.

You've come to the perfect location if you're looking for a good bargain on Italian goods, jewelry, or souvenirs. There's also a Factory Outlet where you can buy electronics and apparel. The Euro is the currency of San Marino.

The San Marino Basilica was finished in 1836. It was constructed on the site of a fifth-century church that was unfortunately razed to make space for it. 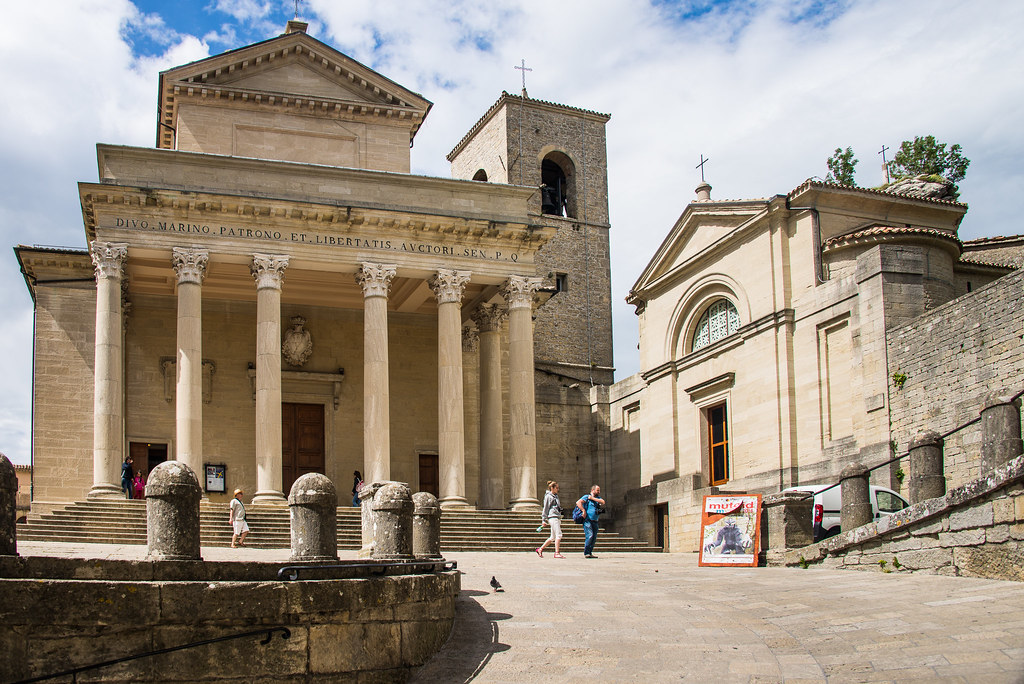 The Neoclassical structure has an eight-Corinthian-column porch. The Basilica is the state's principal religious structure, and it houses the relics of San Marino's founder.

To enter the basilica, you must dress appropriately, which means no bare shoulders, vest tops, or short shorts.

Is San Marino Owned By Italy?

San Marino is a sovereign country having diplomatic ties to the majority of the world. They are a United Nations member, but not a member of the European Union.

Why San Marino Is So Rich?

Apart from tourism, the majority of San Marino's economy comes from the production and export of ceramics, tiles, building materials, furniture, textiles, fabrics, paints, and certain high-quality spirits and wines. The banking system of San Marino is an integral part of the Italian banking system.

What Is San Marino Famous For?

The Republic of San Marino is claimed to be the world's oldest surviving republic. Tourism drives the economy of the 61 square kilometer (23.6 square mile) republic, which welcomes almost three million visitors each year. Postage stamps and coins, which are highly sought after by collectors, are significant sources of revenue.

San Marino is now an independent country having diplomatic connections with the majority of the world. They are a United Nations member, but not a member of the European Union. They are not members of the Schengen Zone, which permits passport-free travel among European nations, although they do have an open border with Italy.