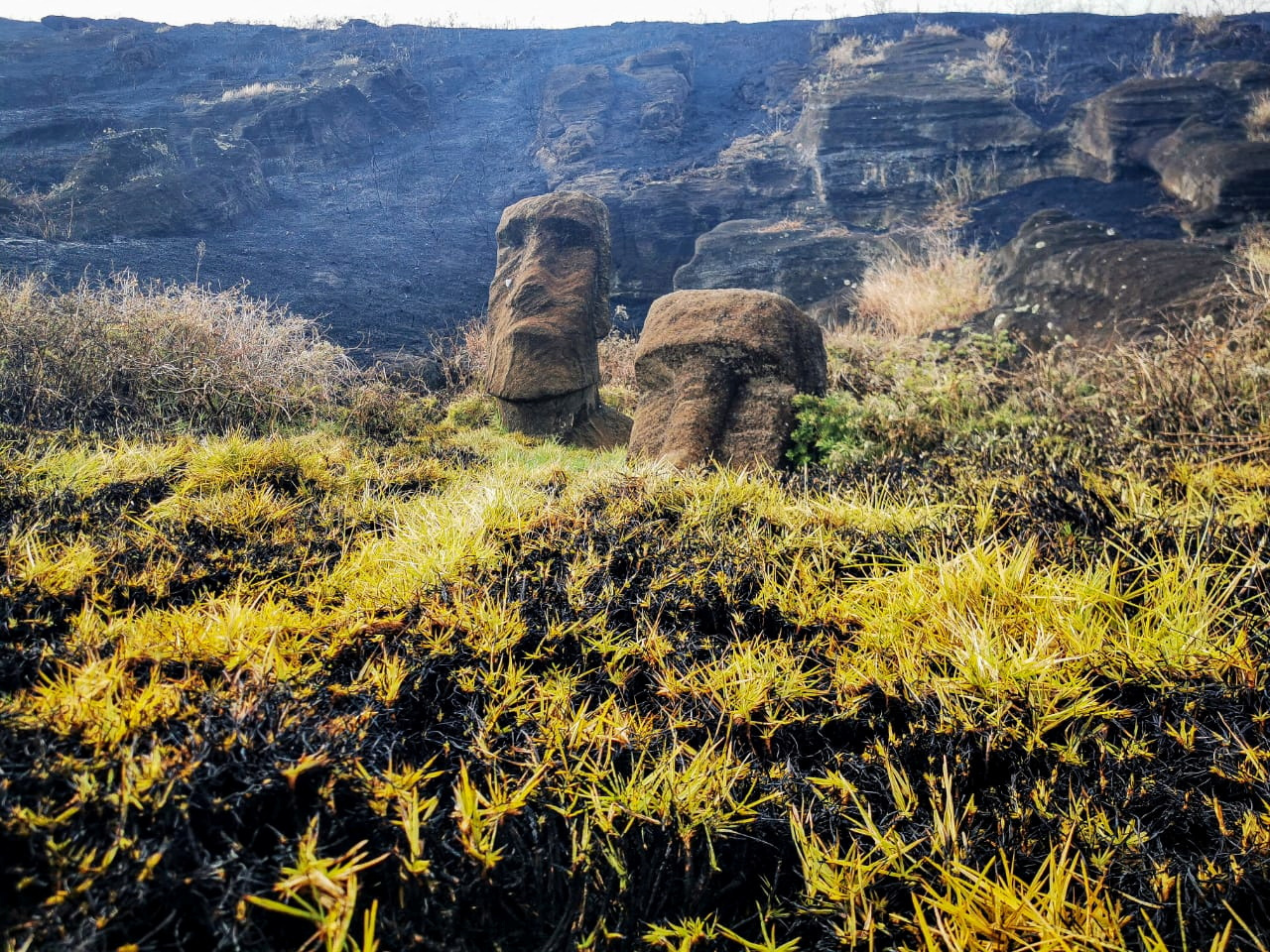 Due to a volcano fire, sacred Easter Island statues sustain irreparable damage. The towering stone heads and other archaeological elements on Easter Island have reportedly been charred by a fire, which has been reported by both local Indigenous authorities and Chilean authorities.

A fire was to blame for all of this devastation. The fire started on Monday and was caused by the nearby Rano Raraku volcano. It razed more than 100 hectares of the island and caused damage to the island's famous stone-carved statues that are known as "Moai." The volcano is located nearby.

Officials of the indigenous community claim that the statues, which were crafted by a Polynesian people more than five hundred years ago, have been damaged.

In a statement released on Thursday, Ariki Tepano, who serves as the director of the indigenous Ma'u Henua community and oversees the management of the Rapa Nui Natural Park, referred to the damage as "irreparable" and warned that the "consequences go beyond what the eyes can see."

The Rapa Nui National Park is a protected area that displays the legacy of the Rapa Nui culture. The name of the park comes from the indigenous moniker for the island, and it was named after the park.

The island, which is the world's most remote inhabited island and is on the list of UNESCO's World Heritage sites, is located approximately 3,500 kilometers (2,174 miles) off the coast of Chile.

Easter Island is famous for its moai (meaning "statue") stone statues of human figures. Rapa Nui is the name given to the island by its inhabitants. The moai were most likely carved to honor important ancestors and were constructed between around 1000 C.E. and the second half of the seventeenth century.

Over the course of a few hundred years, the residents of this remote island quarried, carved, and erected approximately 887 moai. The size and complexity of the moai grew over time, and Hoa Hakananai'a is thought to date from around 1200 C.E.

The practice of constructing moai peaked around 1500 C.E., and statues began to fall sporadically around 1600 C.E. The fragile ecosystem of the island had been pushed beyond its limits.

Only sea birds remained over time, nesting on safer offshore rocks and islands. As a result of these changes, the Rapanui religion evolved into the birdman religion.

This sculpture bears witness to the loss of faith in the ancestors' efficacy following deforestation and ecological collapse, as well as a recent theory concerning the introduction of rats, which may have eventually led to famine and conflict.

The remaining standing moai were toppled after 1838, during a period of social collapse caused by European intervention.

It is one of only fourteen basalt moai on the island; the others are carved from the island's softer volcanic tuff. The remaining standing moai were destroyed when Christianity was adopted in the 1860s.

Travelers from all over the world have put the remote island on their bucket lists for a very long time, primarily because of the enormous Moai monuments that can be found there.

Officials from the country's National Monuments Council (CNM) are "on the ground assessing the damages" caused by the fire on the island's sacred stone figures, according to Carolina Pérez Dattari, the Undersecretary of Cultural Heritage for Chile.

According to the CNM, "exposure to high temperatures... which could create big fractures that affect the Moai's integrity" can have a negative effect on the composition of the statues and cause them to deteriorate over time.

According to a post made by the Rapa Nui council on Facebook, the island's national park, which is home to 386 Moai statues carved from solid basalt, is currently closed to visitors while conservationists investigate the full scope of the damage caused by the volcanic eruption.

Easter Island was dealing with a string of inappropriate behavior from tourists not long before the coronavirus pandemic put a halt on travel. These tourists would sometimes take photos of themselves with the Maoi statues in positions that made it appear as though they were "picking the noses" of the enormous statues.