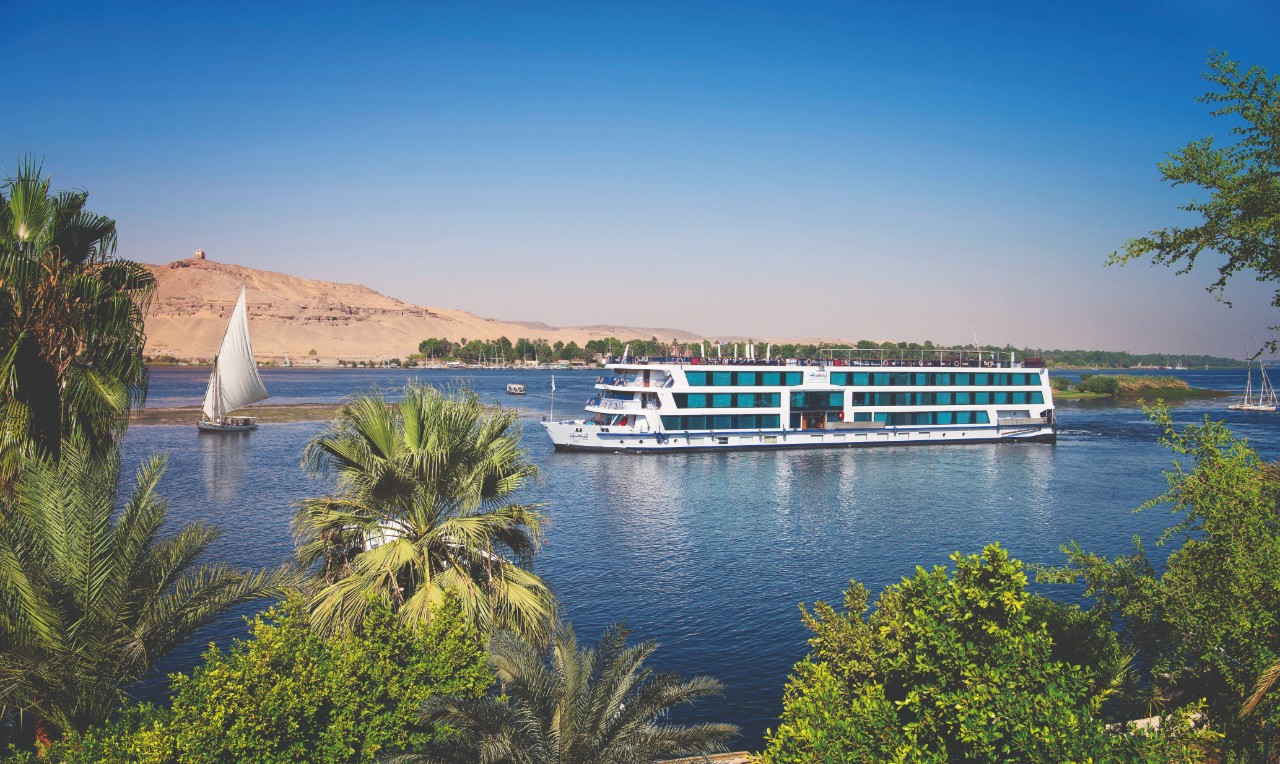 If you are someone who enjoys going on cruises, then Nile cruises in Egypt need to be on your list of things to do.

Nothing compares to the Nile Voyage Luxor Aswan in Egypt. It provides grandeur, experience, and stunning views all in one package.

However, before you embark on your journey down the Nile Estuary, there are a few things you should know that will enhance your experience and help ensure your expedition goes off without a hitch.

The Nile is one of the most famous rivers on the planet, and for good reason. While all rivers are vital to the people and species who live nearby, the Nile looms particularly large, both physically and metaphorically.

A small village near Nile River

Here are some of the reasons why this river is so influential and fascinating.

1. It Is The World's Longest River

A satellite map of the entire White Nile. The Nile runs north from the African Great Lakes for approximately 6,650 kilometers (4,132 miles) before emptying into the Mediterranean Sea.

It runs through 11 nations, including Tanzania, Uganda, Rwanda, Burundi, the Democratic Republic of the Congo, Kenya, Ethiopia, Eritrea, South Sudan, Sudan, and Egypt, and drains 3.3 million square kilometers (1.3 million miles), or almost 10% of the African continent.

2. There Are Several Niles

The Lower Nile used to flood in the summer, which perplexed early Egyptians because it nearly never rained where they lived.

However, we now know that, while being Egypt's only river, the Nile is fed by considerably rainier areas to the south, and its hydrology is influenced by at least two "hydraulic regimes" upstream.

It flows north as the Albert Nile (Mobutu), then becomes the Mountain Nile (Bahr al Jabal) in South Sudan before joining the Gazelle River (Bahr el Ghazal), where it is known as the White Nile (Bahr al Abyad). Near Khartoum, Sudan, where it meets the Blue Nile, it becomes simply "the Nile."

3. People Spent Years Trying To Find Out Where Is Its Source

The Nile was treasured by the ancient Egyptians as their source of life, but it was always veiled in mystery.

It would be for centuries as expeditions failed repeatedly to identify its source, with Egyptians, Greeks, and Romans frequently foiled by an area known as the Sudd (in what is now South Sudan), where the Nile forms a large swamp. This contributed to the river's mystique, which is why traditional Greek and Roman art depicted it as a god with a concealed face.

4. It Takes An Unusual Detour Through The Desert

After steadfastly forging north for the most of its journey, the Nile takes an unexpected detour in the Sahara.

With its main tributaries finally merged, it flows north across Sudan for a short time before abruptly turning southwest and heading away from the sea. It continues like way for about 300 kilometers (186 miles), as though it is returning to Central Africa rather than Egypt.

Of course, it finally goes back on track and traverses Egypt as one of the most famous and significant rivers on the planet. But why does it first take such a long detour?

The "Great Bend" is one of several landforms generated by the Nubian Swell, a massive subsurface rock structure. It was produced by tectonic uplift over millions of years, which drove this spectacular bend and formed the Nile cataracts.

According to a geological summary published by the University of Texas at Dallas, "these rocky river segments would have been quickly eroded by the abrasive impact of the sediment-laden Nile."

The Nile, as it flows into Egypt, alters a region of the Sahara desert along its banks. This difference is obvious from space, where a long, green oasis can be seen hugging the river in the midst of a bleakly brown terrain.

The Sahara is the world's largest scorching desert, smaller only than our two polar deserts, and changing it in this way is no easy task. The Lower Nile has historically flooded in summer due to the seasonal intake of water from Ethiopia, saturating the arid land in its floodplain.

But water alone was insufficient to control the Sahara. The Nile also delivered a hidden ingredient: all the sediment it accumulated along the way, primarily black silt eroded from basalt in Ethiopia by the Blue Nile and Atbara. Every summer, the silty torrents would sweep into Egypt, then dry out and leave behind a magnificent black muck.

Around 6000 BCE, permanent human settlements arose on the Nile's banks, and by 3150 BCE, those settlements had constituted "the world's first identifiable nation state."

A sophisticated and distinct civilization swiftly emerged, and Egypt would remain the greatest nation in the Mediterranean world for nearly 3,000 years, fuelled by the Nile's endowments of water and lush land.

The subject of how to plan a Nile journey is fundamental since it will influence whether you have a satisfactory journey to the target.

The primary goal of this piece is to give all travelers all of the vital facts and nuances on the most excellent approach to engage in the ideal stream experience possible in the region. 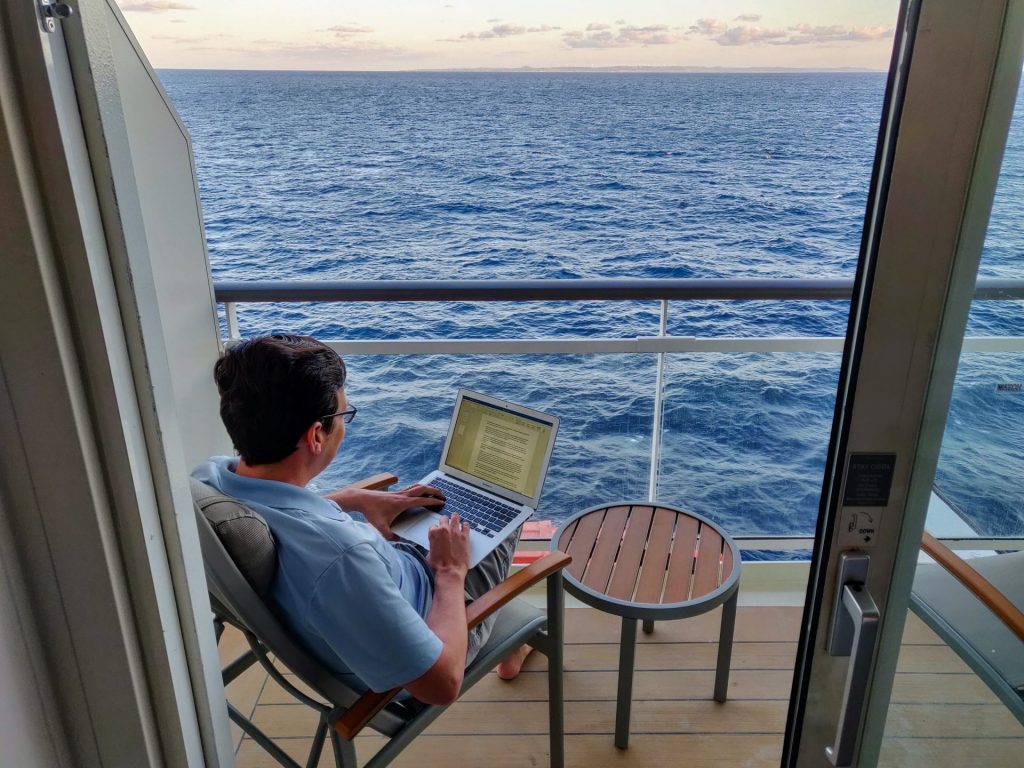 A man with his laptop in a cruise ship

1. Not All Travels Are The Same

There are different Nile Voyages available, however not all will be the same. By looking at plans, you will know exactly what you are promised and may compare the cost differences.

While one voyage may provide extensive value, others may not. You may be startled, especially if you expect the outing to include everything, such as dining, drinking, and so on.

The Nile Voyage Luxor Aswan and other authentic travels spread out whatever you want or need to be aware of so you can see what you'll receive... and what you won't get. When it comes to your getaway, don't expect anything.

2. What Are You Carrying In Your Compartment?

You could think you know what's going to be in your lodge. You may have even looked at the photographs on the website of your voyage transport. In any event, it is impossible to dispute that not all of the lodges are alike in certain ways.

It's a good idea to figure out all of the details about the specific lodge you'll be staying at, for example, the size of the bed, whether there are windows, and whether the room is close to other people.

3. Some Words Of Advice

Before boarding your journey transportation, you should be informed that tips and gratuities are remembered for your cost. Some vacation packages include them, while many do not.

You may be getting a lower rate on a bundle that does omit tips; this isn't necessarily a bad thing; it's simply something you should be aware of so you can cover your own. The individuals who serve you will appreciate your foresight.

4. Put Together A Daypack

When you take a cruise transport, you usually have to trust that your luggage will be delivered to your room.

You probably need to get something done at this time. Make sure to bring a few belongings in a small day bag for this term and don't take any chances if your pack is delayed or, heaven forbid, lost.

Pay close attention to your leaflet and other travel information. You must bring everything you need to meet the clothing requirements, or you risk being left out when dinner time arrives. A few journeys even have themed dress occasions. Know before you leave.

6. Strive For The HighWay

If you are afraid of getting queasy or are convinced that you will, you should seriously consider jumping on a higher-up lodge. The higher the lodge, the less movement there will be. Pursuing the more responsible alternative may cost you more, but failing to do so may cost you your outing in the long run.

7. Be Prepared For Internet Downtime

You may not have network access during your outing. This can be a surprisingly pleasant development, allowing you to concentrate on having a good time and paying attention to others around you. Having said that, it can also cause problems. Check to see if you'll have web and phone administration, insufficient help, or how the setup will be.

Make certain to inquire about the services provided by your mode of transportation in the event that you, a friend, or a family member falls unwell. Is there going to be a facility or a specialist on the outing? If this is the case, consider whether you want to pay up front or if you can use your insurance in the event that you do want assistance. Determine the methods that will be used in the event of a major clinical concern. Things do happen, so knowing what safety precautions are in place is prudent.

9. Experiment With Advising Others

You should check before boarding Nile Voyage conveyance to verify if tips and tips are remembered for your charge. Nonetheless, many trips do not include them. A bundle that excludes tips may be less expensive, but it doesn't always mean it's bad; you simply need to be aware of this so you can design accordingly. Those that work for you will appreciate your consideration.

The higher the lodge, the more likely you are to become sick, so if that is a concern, you may need to pay extra for one. The higher up in the lodge you are, the less movement you experience. Over time, failing to take the more prudent alternative may cost you your vacation.

Everyone should cover all expenses associated with their chosen Nile voyage, including Nile trip inns, individual or gathering visit administrators, all suppers and refreshments, homegrown transportation, and any other extraneous expenses.

12. Make A List Of Everything You'll Need To Bring With You

Shades, a cap, sunscreen, medications, and, if traveling during the cooler months, an additional cover and comfortable clothing are among the most important items to bring with you while loading up your Nile Estuary Sail.

How Much Does The Nile Cruise Cost?

The most affordable 4-day Nile cruises start at US$210. Luxury cruises are more costly. Prices for a 5-day trip start at US$310 per person and rise to US$480 for high-luxury ships. The shortest Nile cruise lasts three days and two nights and costs less than $200.

What Is The Best Time Of Year To Do A Nile Cruise?

Between October and April is the optimum season to cruise the Nile. The weather is not too hot during these months, so you can make the most of your day traveling to the major sights from Luxor to Aswan.

How Do I Choose A Nile Cruise?

The Nile Estuary Voyage is a way for witnessing an enchanted piece of the sky that mirrors the collection of experiences and mysteries of one of the most seasoned and beautiful municipal institutions on the planet's substance. Follow these recommendations to make every moment of your Nile Estuary Voyage memorable.