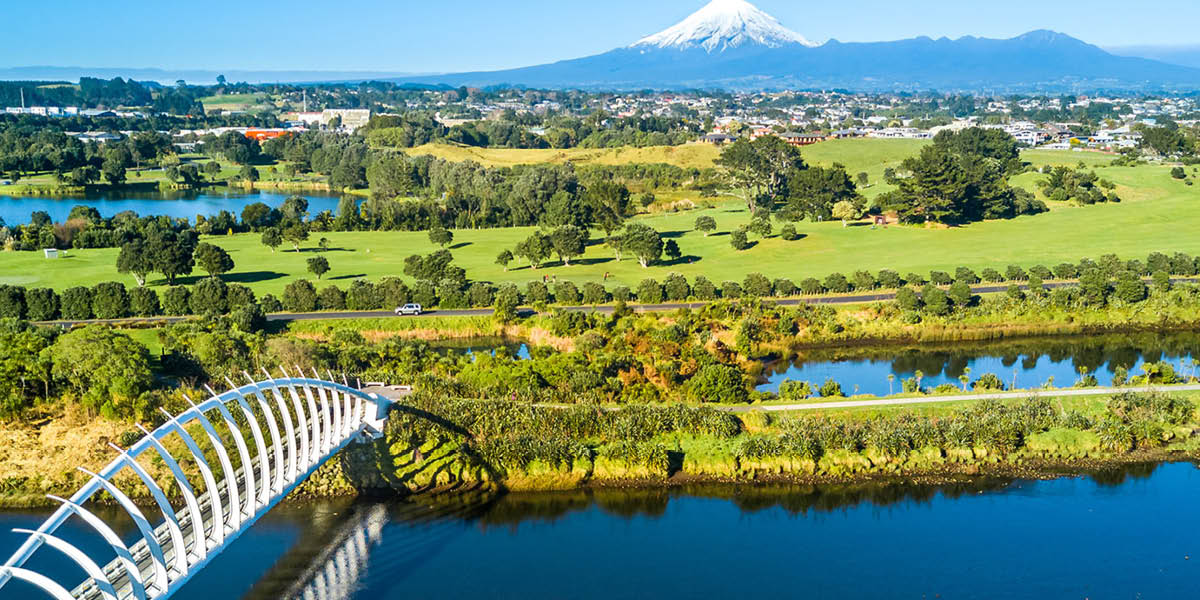 The conical shape of Taranaki Maunga provides a stunning backdrop to the city, serving as a continual reminder that Egmont National Park or Taranaki is just a short drive away.

New Plymouth is the principal city of the Taranaki region on the north island's west coast. It is named after Plymouth, Devon, the English city from which the first English settlers arrived in New Plymouth. 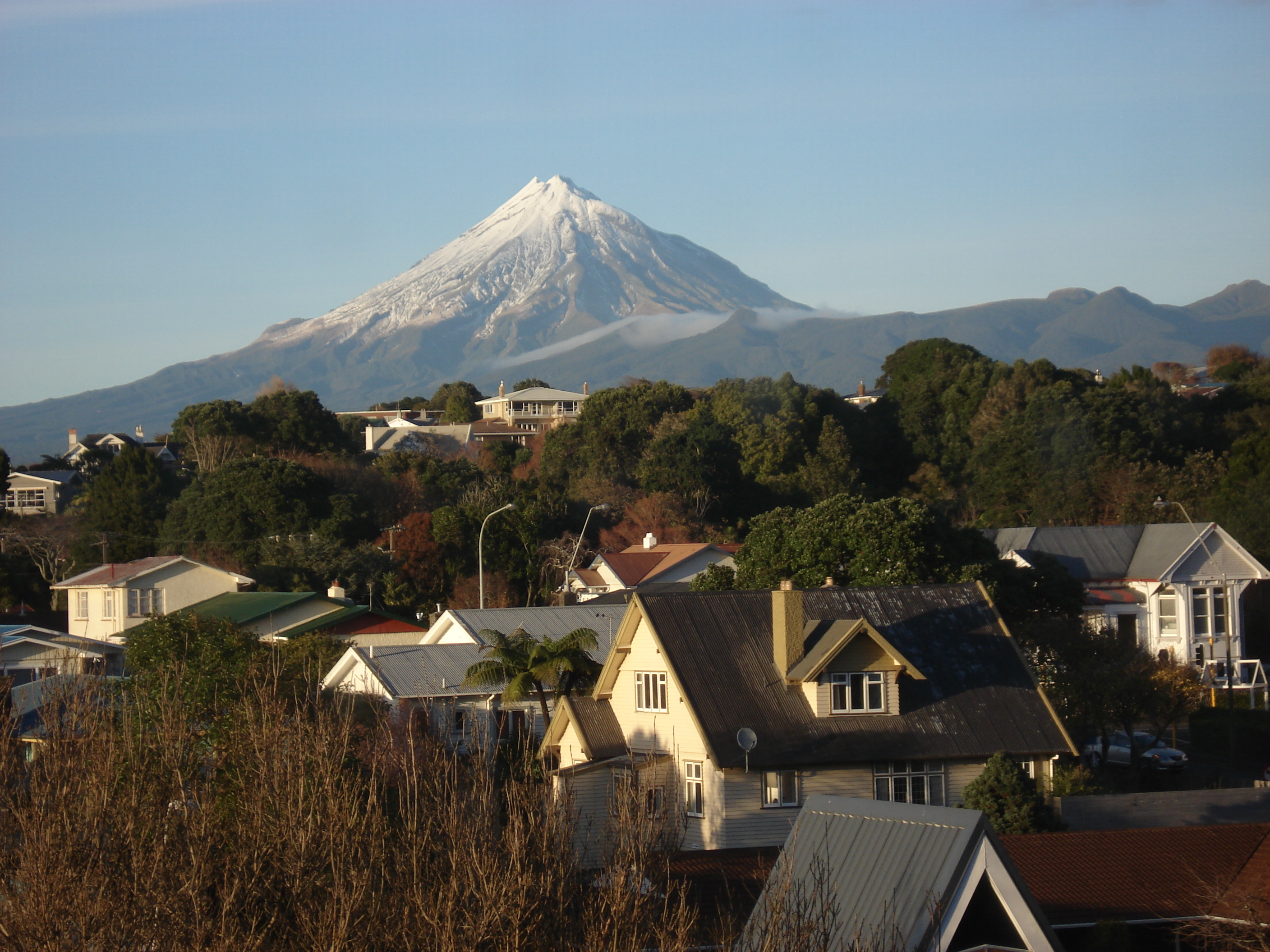 A view of some houses near Mt Taranaki

The New Plymouth District, which comprises New Plymouth City and many smaller towns, is the tenth largest district (out of 67) in New Zealand and has a population of 87,300 – around two-thirds of the Taranaki Region's total population and 1.7% of New Zealand's overall population.

The city serves as a hub for the region's primary economic activities, which include intense pastoral activity (mostly dairy farming) and oil, natural gas, and petrochemical discovery and production.

As the location of the TSB Bank (originally the Taranaki Savings Bank), the largest non-government-owned New Zealand bank, it is also the region's financial hub.

The city was selected as one of two "Model Communities" for walking and cycling in 2010. On the basis of New Plymouth's already favorable attitude toward bicycles and pedestrians, the city was awarded $3.71 million to invest in infrastructure and community activities to promote walking and cycling.

New Plymouth is particularly notable for being a coastal community with a mountain within 30 minutes' driving distance, where inhabitants and visitors may snowboard, ski, water ski, and surf on the same day. 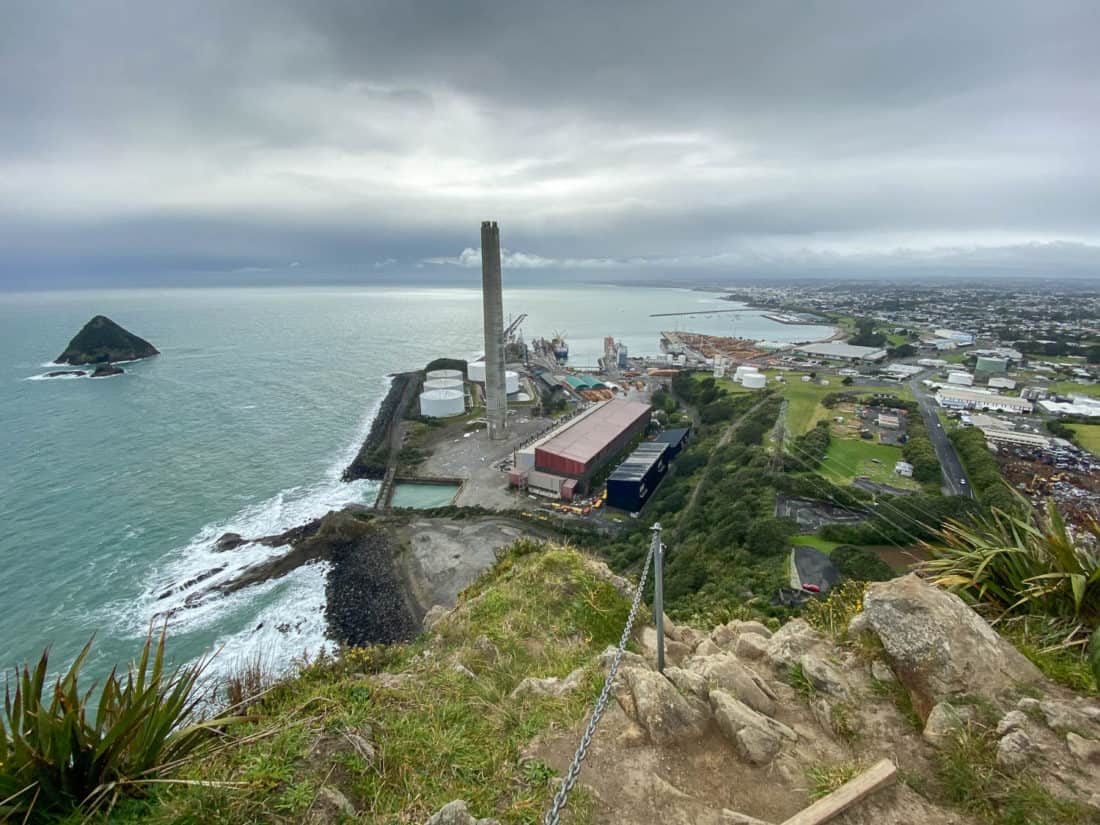 On August 15, 2011, it snowed in New Plymouth, a rare occurrence described as a once-in-a-generation event. In 2021, a location in New Plymouth was deemed the sunniest in the country after recording 2592 hours of sunshine.

New Plymouth is a city ("district") and port in the Taranaki region of the western North Island of New Zealand. It is at the base of Mount Taranaki along North Taranaki Bight (Egmont). 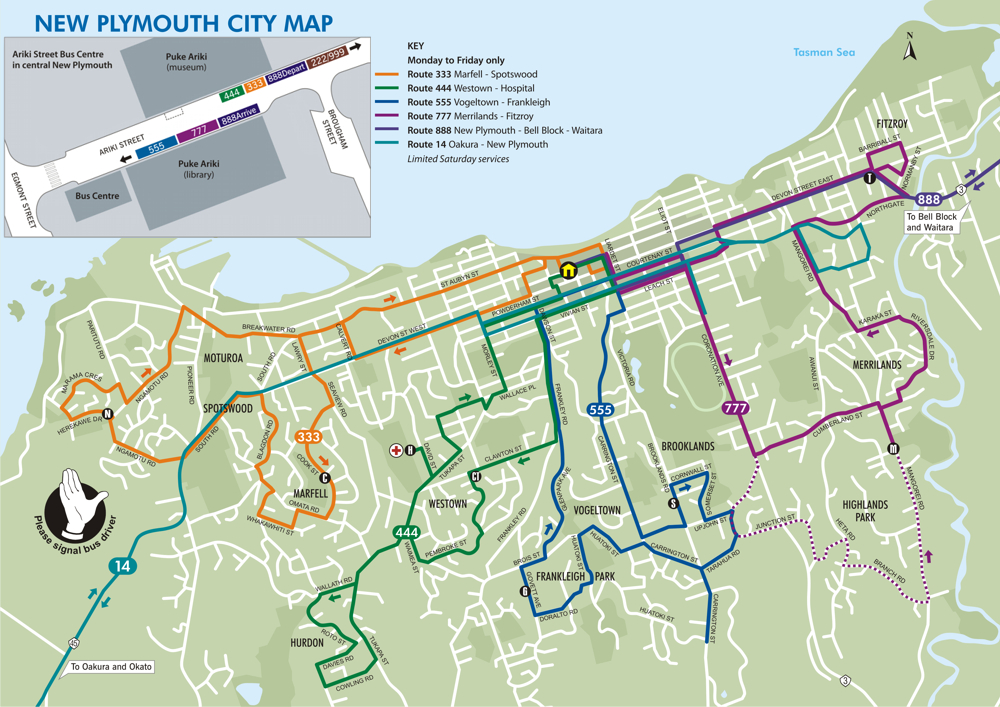 A detailed map of New Plymouth

Under the aegis of the New Zealand Company, the New Plymouth Company created the settlement in 1841.

Over time, land disputes between the English immigrants of New Plymouth and the indigenous Maori culminated in the 1860 Taranaki War. In 1877, the town was named a borough, and in 1949, it was elevated to city status.

New Plymouth is the leading dairy center in New Zealand. Its artificial harbour makes it an important port that imports cement, petroleum goods, and fertilizer and exports dairy products and meats, which are produced and processed mostly in the surrounding area.

Gas is piped from the adjacent Maui and Kapuni fields to various locations. New Plymouth, known for its parks, is located near Egmont National Park and is a tourist town offering winter activities at Mount Taranaki.

Top 5 New Plymouth Things To Do

Mount Taranaki and Egmont National Park are unquestionably the most popular tourist attractions in New Plymouth. 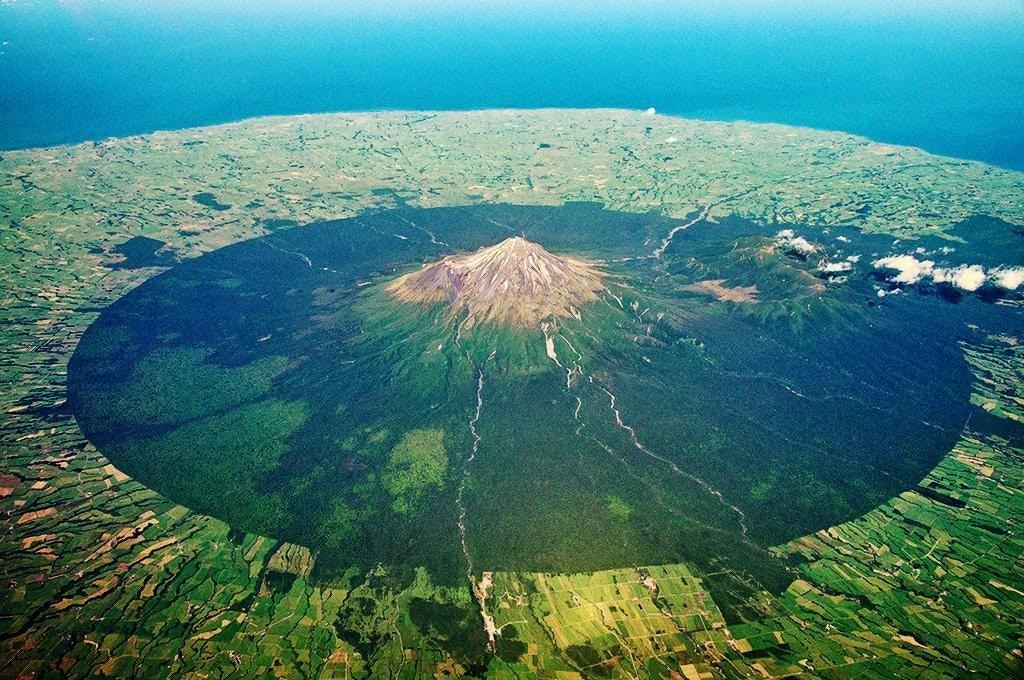 An aerial view of Mount Taranaki And Egmont National Park

Mount Taranaki, a stratovolcano, is so aesthetically pleasing that it was utilized as Mt. Fuji in the Tom Cruise film The Last Samurai.

In the heart of Egmont National Park, visitors can pick from a variety of wonderful hikes ranging in length from a few of hours to several days.

The Te Rewa Rewa Bridge is located at the mouth of the Waiwhakaiho River and is another another of the region's iconic monuments and truly unique artworks. 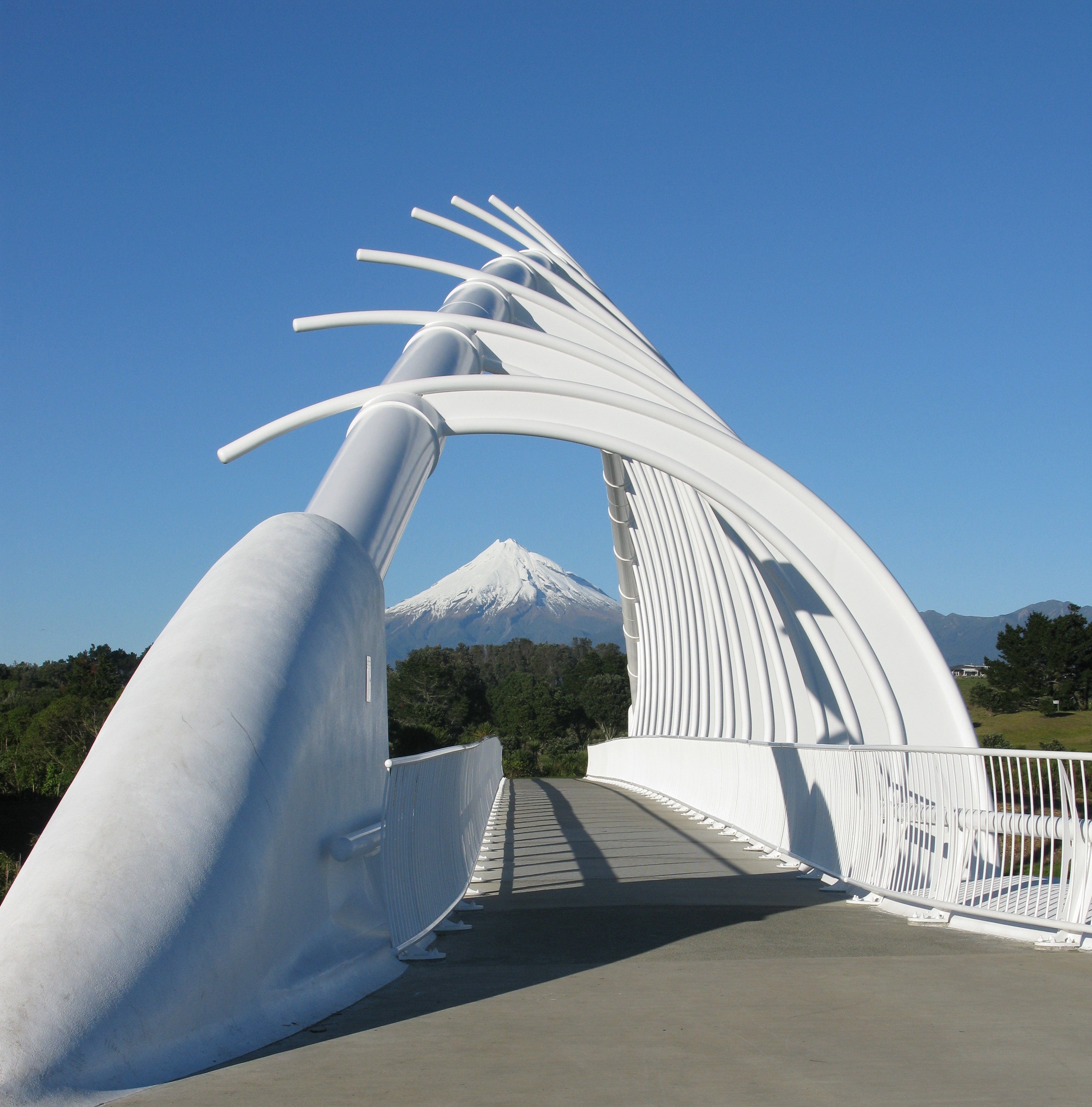 Te Rewa Rewa bridge with Mt. Taranaki in the backdrop

The shimmering white building attracts pedestrians, runners, and cyclists to the Coastal Walkway due to its beautiful surroundings, form, and vantage points.

Since its opening in 2010, the 70-meter-long bridge has received numerous accolades for its creative architecture and remarkable engineering.

While its curved steel arches were supposed to resemble the skeleton of a whale or a breaking wave, the bridge's movement and shape also illustrate the harmonic interplay between land, sea, and wind.

This is evident when you cross the bridge and turn around to view Mount Taranaki framed spectacularly by the bridge's framework.

In addition to Mt. Taranaki, New Plymouth is also home to the Sugar Loaf Islands and Paritutu Rock, which are both remains of volcanic activity. 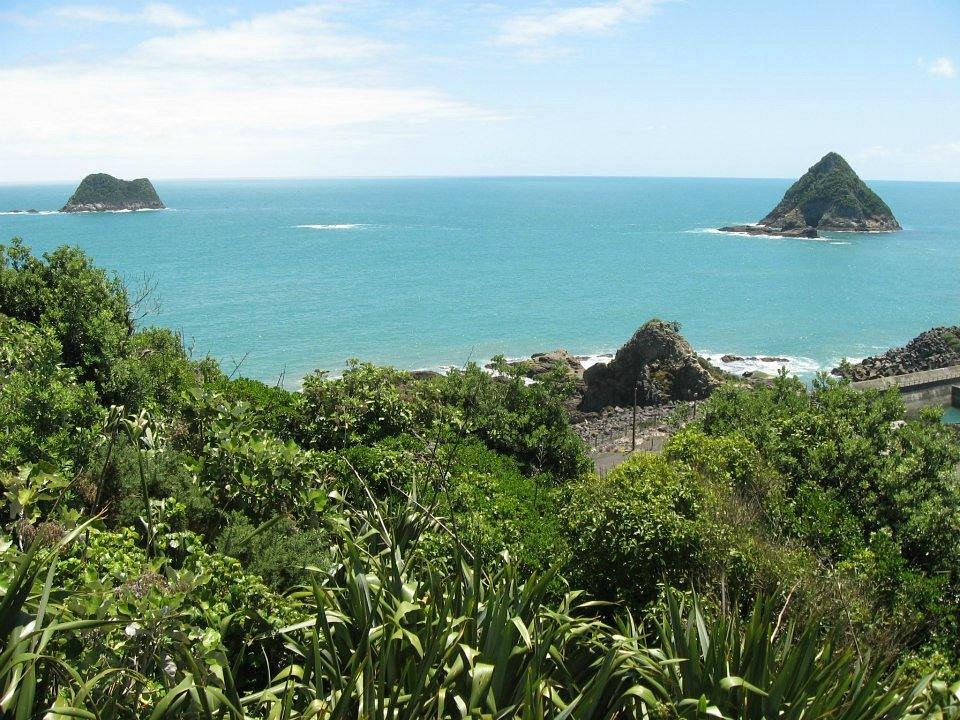 There are seven sugar loaf islands in all, all of which are surrounded by reefs and underwater features teeming with marine life.

The short but steep 15-minute ascent to Paritutu Rock lies on the shoreline itself. At its peak, you will have panoramic views over the Taranaki region and the surrounding area.

The magnificent Govett-Brewster Art Gallery is a must-visit whilst in Wellington, since it is widely regarded as one of the finest regional art galleries in New Zealand. 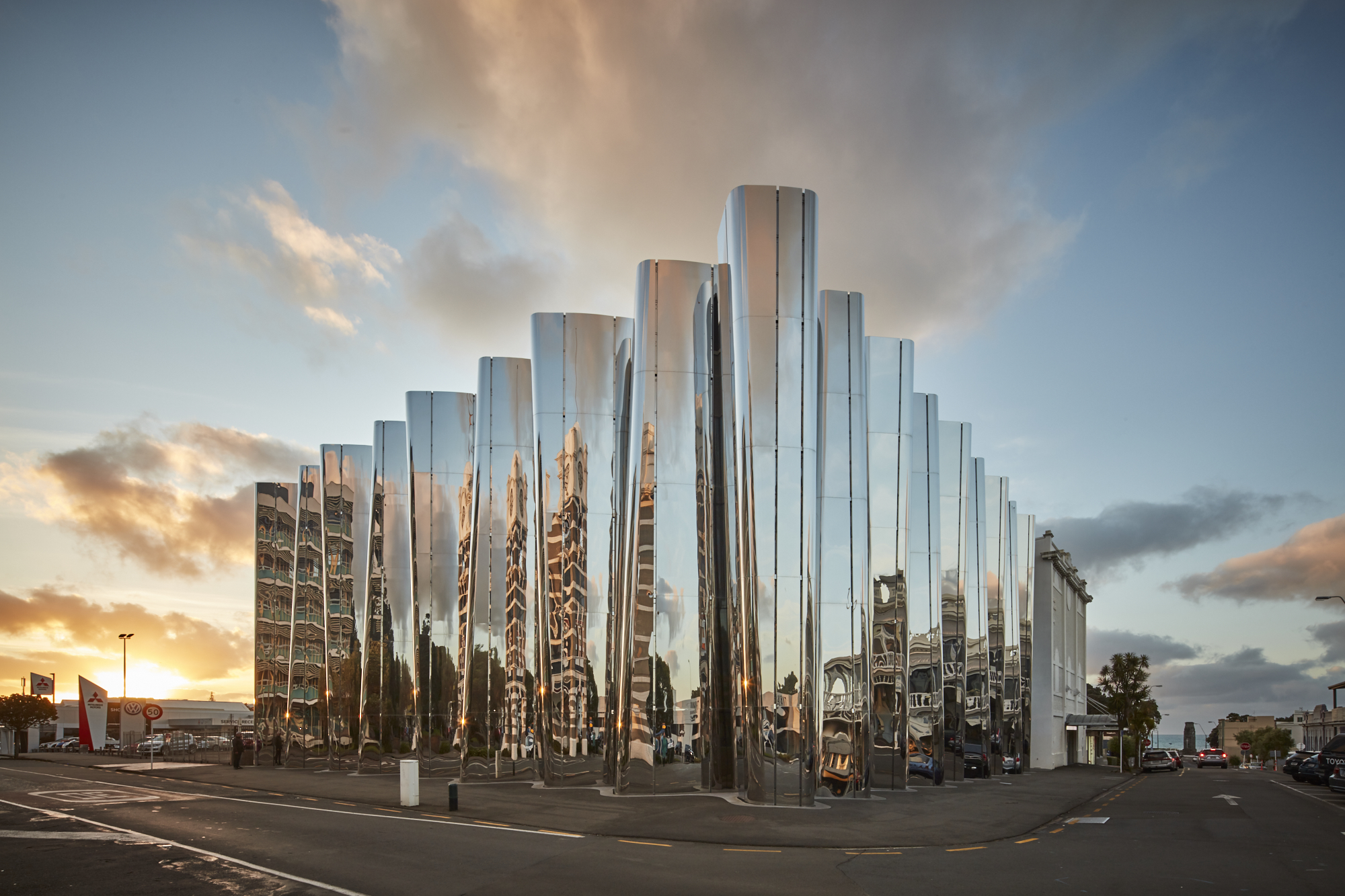 While the museum's main building opened to the public in 1970, its newest wing, the Len Lye Centre, features the most impressive architecture.

Devoted to the native of New Zealand, its dazzling, mirror-like exterior is quite a sight, with even more astounding dynamic marvels located within.

With so many absolutely unique paintings, photographs, and video projects on show, it is not surprising that the gallery is the focus of many New Plymouth visitors' trips.

Just north of Mount Taranaki and Egmont National Park is the globally renowned Pukeiti Gardens, a delightful and tranquil spot to stroll. 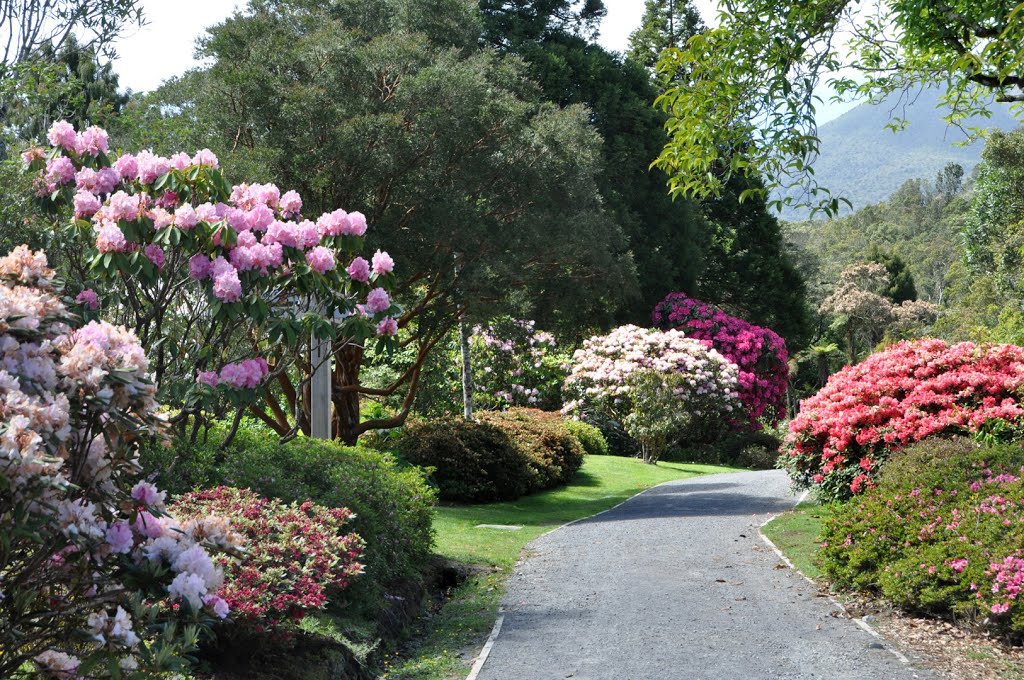 An amazing pathway in Pukeiti Gardens

Located a half-drive hour's southwest of the city, it is renowned for its extensive collection of azaleas and rhododendrons, which are best observed between September and November.

The gardens, which were established in 1951, have expanded significantly with the addition of walks, flowerbeds, and even sculptures among the humid rainforest.

The expansive complex features over twenty kilometers of enticing paths and covered walkways, as well as enchanting treehouses, a warm cafe, and an educational visitor center.

The botanical gardens, which have long been one of New Plymouth's most popular attractions, are likely to please both nature lovers and outdoor enthusiasts.

Is New Plymouth In North Or South Island?

New Plymouth is a city ("district") and port in the Taranaki region of the western North Island of New Zealand. It is at the base of Mount Taranaki along North Taranaki Bight (Egmont).

Is New Plymouth A City Or A Town?

New Plymouth (Mori: Ngmotu) is the principal city of the Taranaki region on the north island's west coast. It is named after Plymouth, Devon, the English city from which the first English settlers arrived in New Plymouth.

Is New Plymouth Worth Visiting?

New Plymouth is a small seaside community in Taranaki, an area on the west coast of New Zealand's North Island that is often disregarded by visitors and even Kiwis, despite being rated one of the finest regions to visit in 2017 by Lonely Planet.

The coastal city of New Plymouth on New Zealand's North Island is a hidden treasure with a lot to offer. When it comes to things to do in New Plymouth, there are plenty of options.