Man Built A Plane For His Family In His Garden 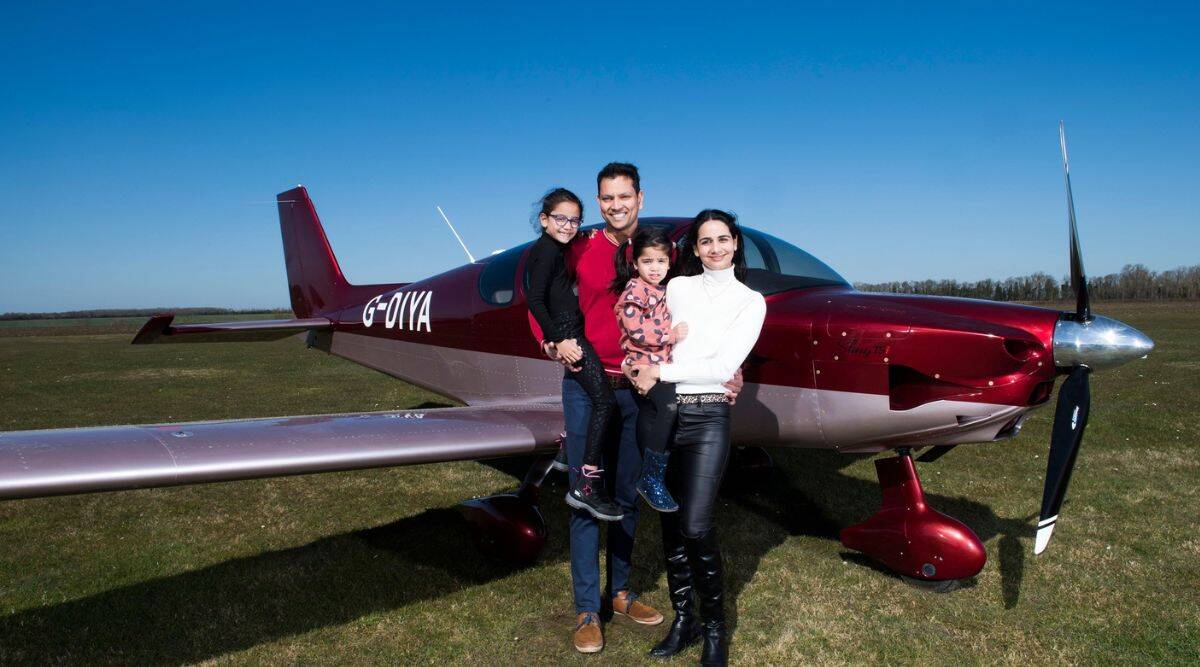 Have you ever seen a man built a plane for his family in his garden? Well one engineer in UK did. Ashok Aliseril Thamarakshan, a mechanical engineer, did not begin to seriously consider learning to fly a plane until he moved near an airfield in the United Kingdom over ten years ago.

Prior to that, he had not even given the idea much thought. A few years later, on the occasion of his 30th birthday, his wife Abhilasha surprised him with a flight experience lasting 30 minutes as a gift. This was his first time in the air.

Aliseril, who lives in the county of Essex in England, decided to take flying lessons at a nearby airfield and used his very first lesson to travel to the Isle of Wight, which is an island located in the English Channel to the south of the country.

CNN Travel quotes him as saying, "So that really got me hooked." That was quite an eye opener into how it [flying] gives you the freedom to just go places if you have that ability, and access to an aircraft, he said.

In 2019, Aliseril earned his private pilot's license and quickly began renting out planes for shorter flights after doing so. But as his family grew, the two-seater planes that are typically available for private hire became even less suitable, and he started to mull over the idea of buying his own plane instead. He and Abhilasha now have two daughters.

A brief consideration was given to the possibility of Aliseril purchasing an older aircraft, and the company looked at models that had been constructed in the 1960s and 1970s.

Nevertheless, he claims that he was uneasy about the prospect of flying his family in an older aircraft that he wasn't familiar with, and that he didn't believe that it would be a "comfortable journey."

Aliseril started exploring the possibility of building a plane by himself because he reasoned that doing so would enable him to gain a deeper understanding of the aircraft, which would make it simpler for him to perform maintenance on it in the long run.

After conducting research on do-it-yourself aircraft kits, he discovered a four-seater aircraft made by a South African company called Sling Aircraft that met all of his requirements and was priced reasonably.

In January of 2020, Aliseril took the Sling TSi aircraft out for a test flight at the Sling Aircraft factory facility in Johannesburg for the weekend. After the flight, he was so impressed with the performance of the aircraft that he decided to buy it.

He explains, "This was prior to the invention of Covid, when travel was still very easy at the time." After I got back to the UK, I placed an order for the first kit, and by the time it arrived, the country was under complete lockdown.

According to Aliseril, his coworkers, some of whom had previous experience in the construction of aircraft, initially offered their assistance with the build. This, however, was not feasible due to the restrictions imposed by the global pandemic of the Covid-19 virus, which had reached this point and was present in every region of the world.

Undaunted, he built a small shed in his backyard and planned out the various stages of the project, which would be overseen by the Light Aircraft Association, a UK representative body that oversees the construction and maintenance of home-built aircraft, with permission from the UK Civil Aviation Authority (CAA).

The CAA investigates amateur-built airplanes in the UK and issues a "Permit to Fly" once satisfied that the aircraft is fit to fly.

Although the build was slightly delayed due to Covid-19 restrictions in place in the UK at the time (the Light Aircraft Association inspector assigned to the project was required to visit his working space beforehand), Aliseril was able to begin in April 2020.

While he acknowledges that his engineering background was beneficial in some ways, he believes that his home improvement experience was the most beneficial while building the aircraft, which measures 7.175 meters in length and 2.45 meters in height.

These aircraft kits are designed for any amateur to build, provided you're a bit hands-on and you've got experience working with some specialist tools, describing the detailed Ikea furniture type instructions with drawings that came with the kit. I would say generally, anyone can get involved in these sorts of builds.

Aliseril finished the work himself, enlisting the help of Abhilasha for some of the sections that required more than one pair of hands. Tara, their eldest daughter, was on hand to help with tasks like removing the plastic from each component.

Aliseril had completed the tail and wings by the end of summer 2020. When the next piece of the kit arrived in October, he started working on the fuselage section.

Although he had intended to hire a workshop to build the aircraft, Aliseril believes that creating a workspace at his home was the better option.

I could just walk into the shed and start working, he says. Having everything in the back garden helped a lot, even though space was limited.

Before moving on to the next task, an inspector had to sign off on each stage of the project; the Light Aircraft Association completed around 12 inspections in total.

When the majority of the components were completed and it was time to assemble the aircraft, Aliseril moved everything from his home to a hangar near Cambridge for final assembly and engine fit. A few months later, the plane passed its final inspection.

It was one of the first Sling TSi homebuilt aircraft built in the United Kingdom. G-Diya, named after his youngest daughter, will take to the skies for the first time in January 2022.

Aliseril remembers nervously waiting on the ground as a test pilot took the plane he'd spent 18 months building into the air.