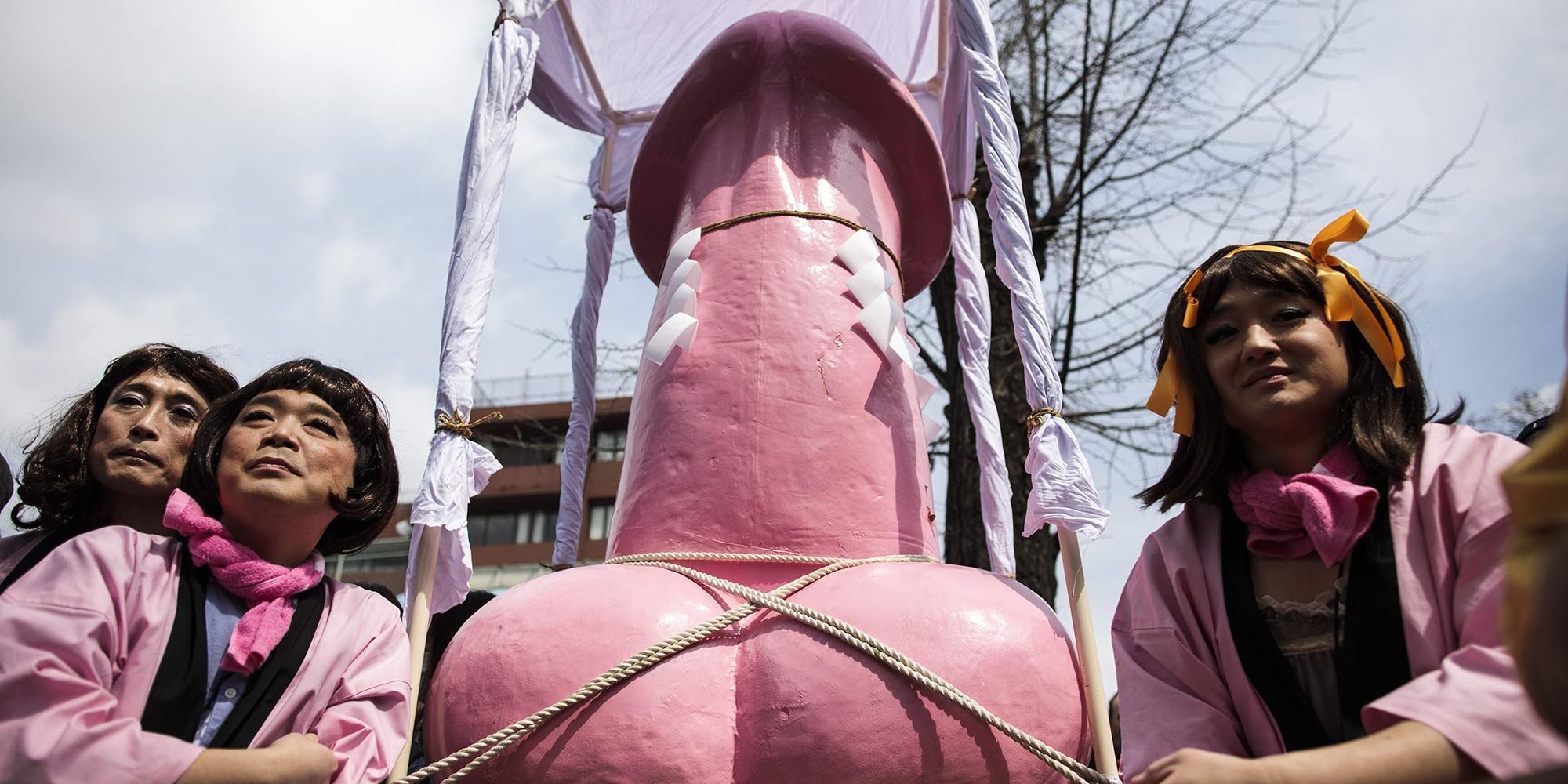 People from all walks of life celebrate various festivals around the world, such as the New Harvest Festival or the New Year with fertility festivals. While many festivals are known to be family-friendly and uplifting, Japan has a festival with a slightly strange and adult theme. In this article, we will discuss the Kawasaki Festival in Japan, also known as the Kanamara Matsui or Penis Festival.

What Is Kawasaki Festival: Kanamara Matsui? 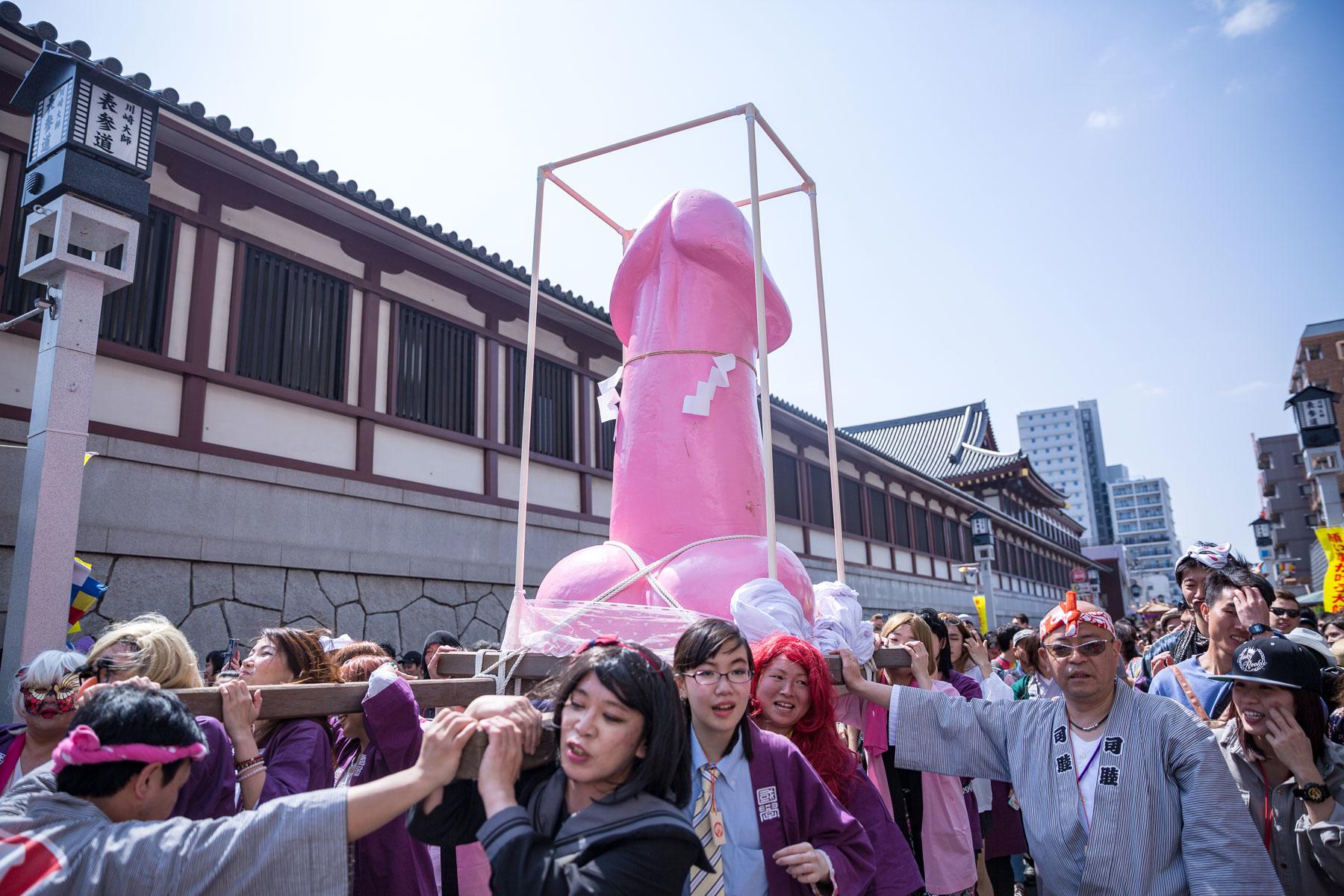 A parade of people holding a giant pink penis

Kanamara Matsuri is a one-of-a-kind festival held annually on the first Sunday of April at Kawasaki's Kanayama Shrine. Most foreign visitors refer to this festival as the Festival of the Steel Phallus or simply "The Penis Festival." Originally, this Japanese festival was intended to offer prayers for fertility, business prosperity, and happy marriages. However, in recent years, this one-of-a-kind festival has evolved into a contentious celebration of sexuality in all of its forms, without judgment. Because of the festival's uniqueness, it has grown in popularity in recent years, with as many foreigners as Japanese attending to celebrate these massive phallic objects.

The History Of The Kawasaki Festival 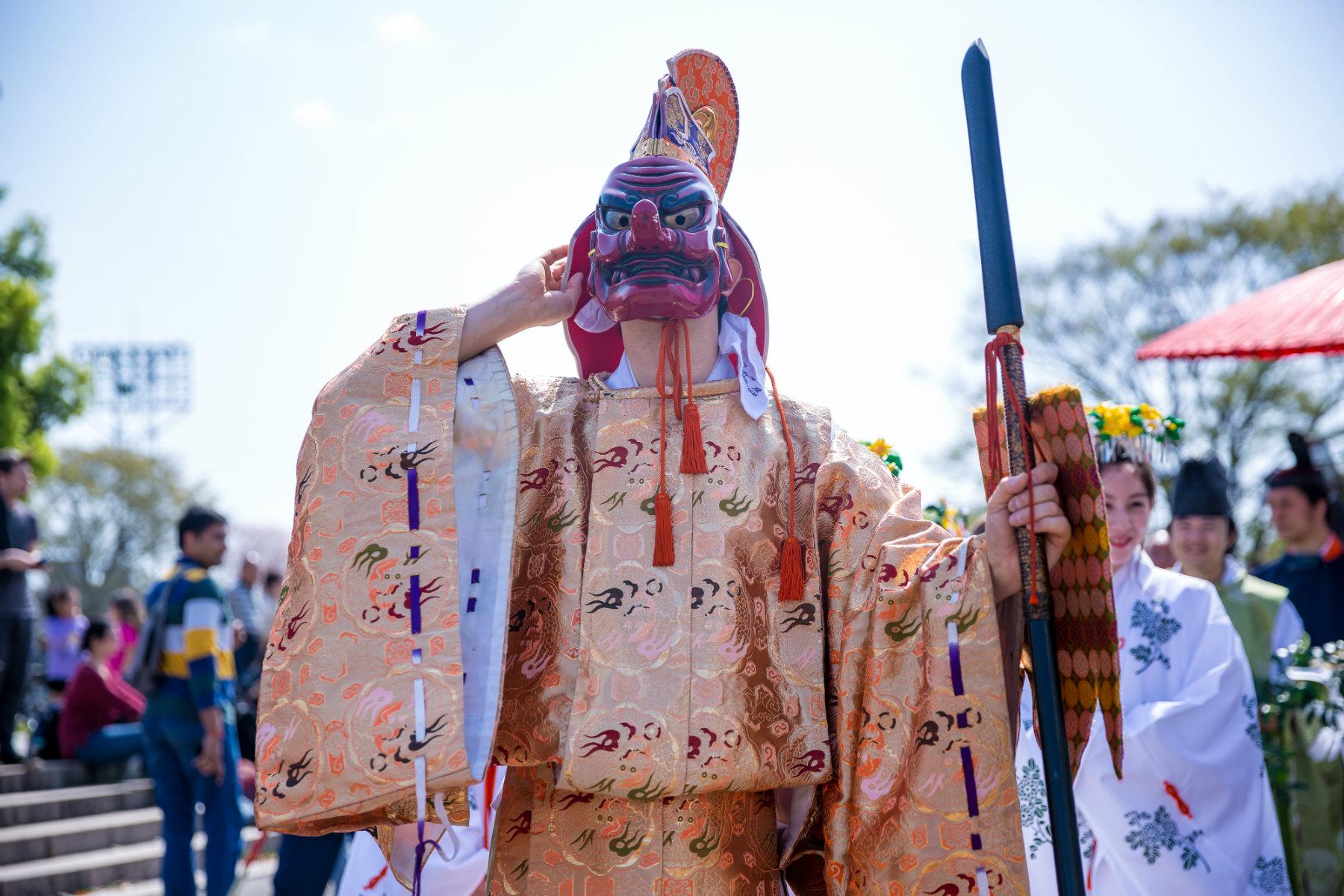 A man wearing a kimono and red mask holding a sword

The festival may seem strange to some visitors, but it has historical roots dating back to the 17th century. According to one legend, during the Edo Period (1603-1868), a demon had unrequited feelings for a lovely woman. However, when she married another man, the demon, out of spite, waited for the wedding night in the woman's vagina. The sharp-toothed demon bit off the poor man's member the moment the new groom attempted to consummate the marriage. The woman eventually remarried, but the jealous demon mangled the new bridegroom's manhood once more. So the clever villagers devised a plan to fool the demon by using a steel phallus. The demon was left toothless the next time he tried his fiendish trick. He immediately left the woman alone, spawning a legend and, over time, a festival.

The deities enshrined in Kanayama Shrine, the festival's location, are thought to promote sexual health and fertility, as well as protect against STDs and infections. The city of Kawasaki was a major stop on the old Tokaido Road between Tokyo and Kyoto, and the shrine has long been popular among prostitutes seeking protection from venereal diseases.

What Happens At The Kawasaki Festival? 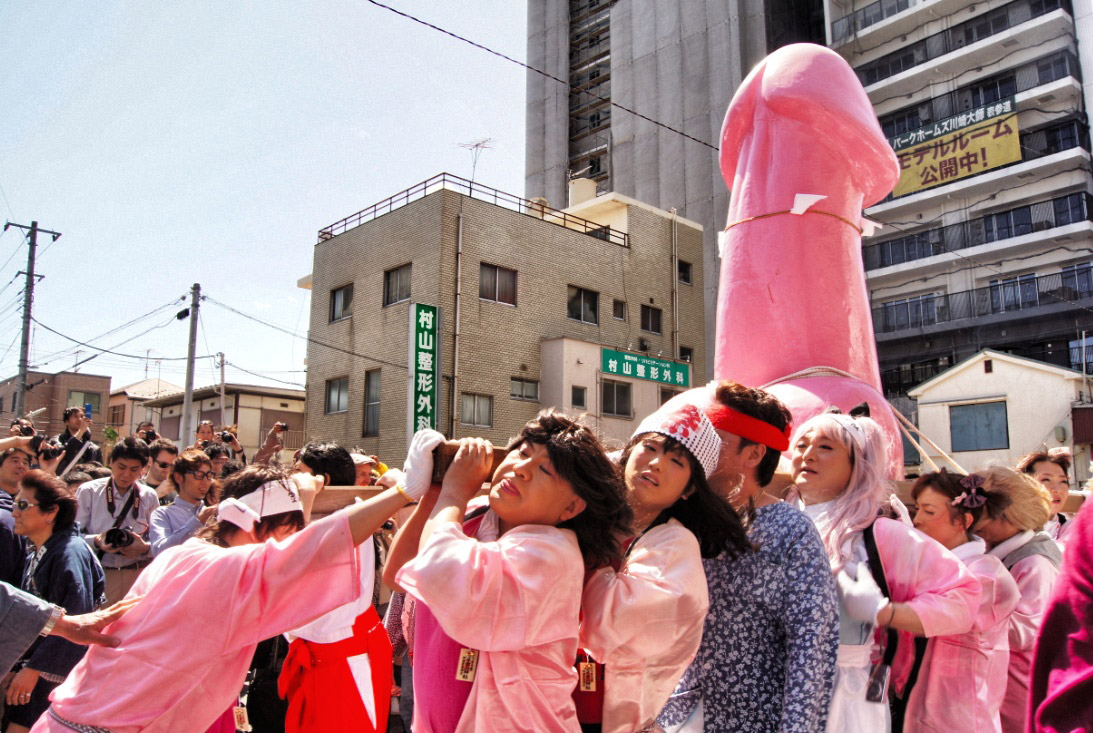 Many of those attending the event are also dressed extravagantly. During the celebration, you can see Batman, Superman, Naruto, Sakura, and even Pikachu. Because cosplay is popular in Japan, you can also go sightseeing and pose with your favorite anime character.

Other Things To Do During Kawasaki Festival 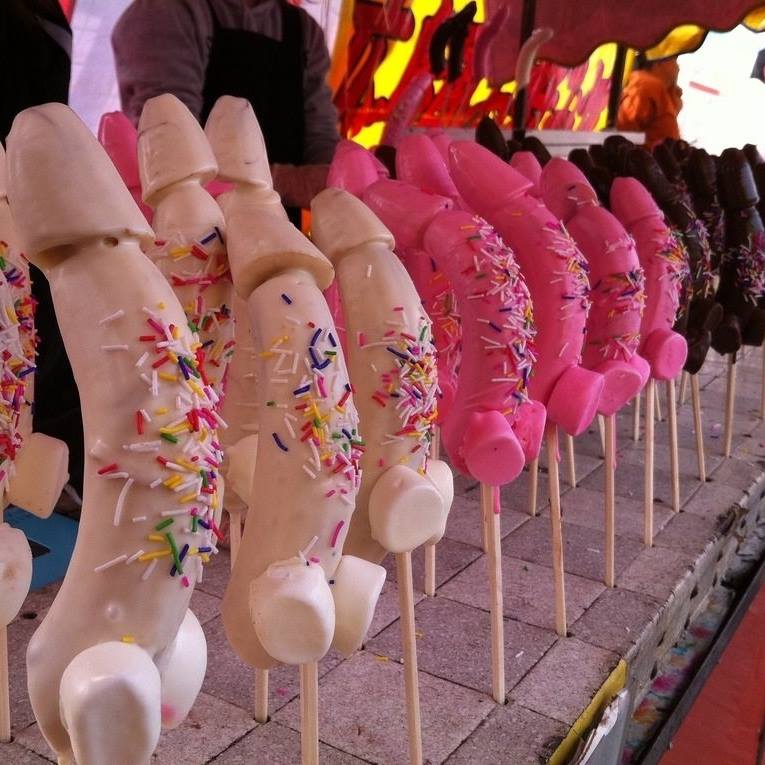 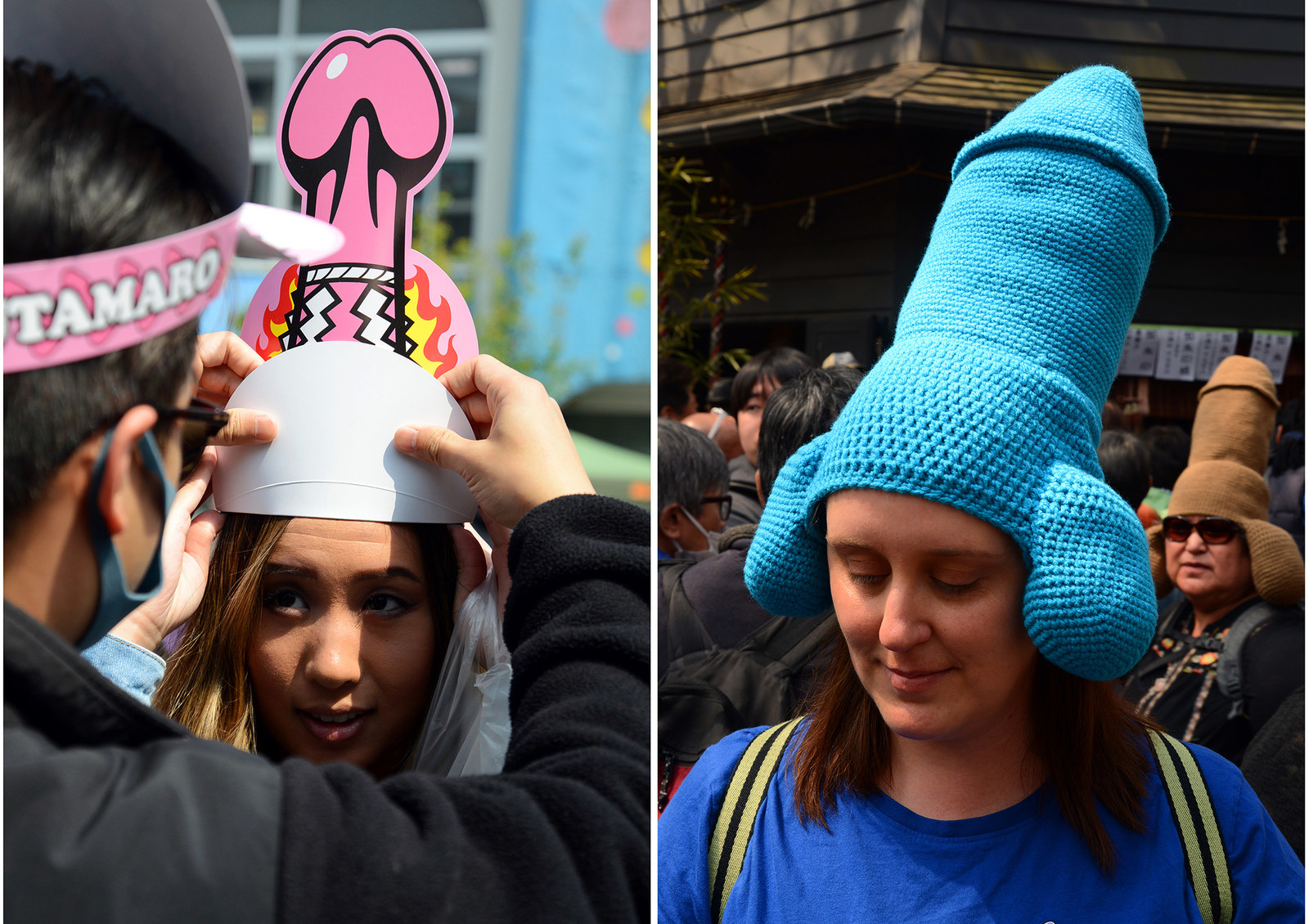 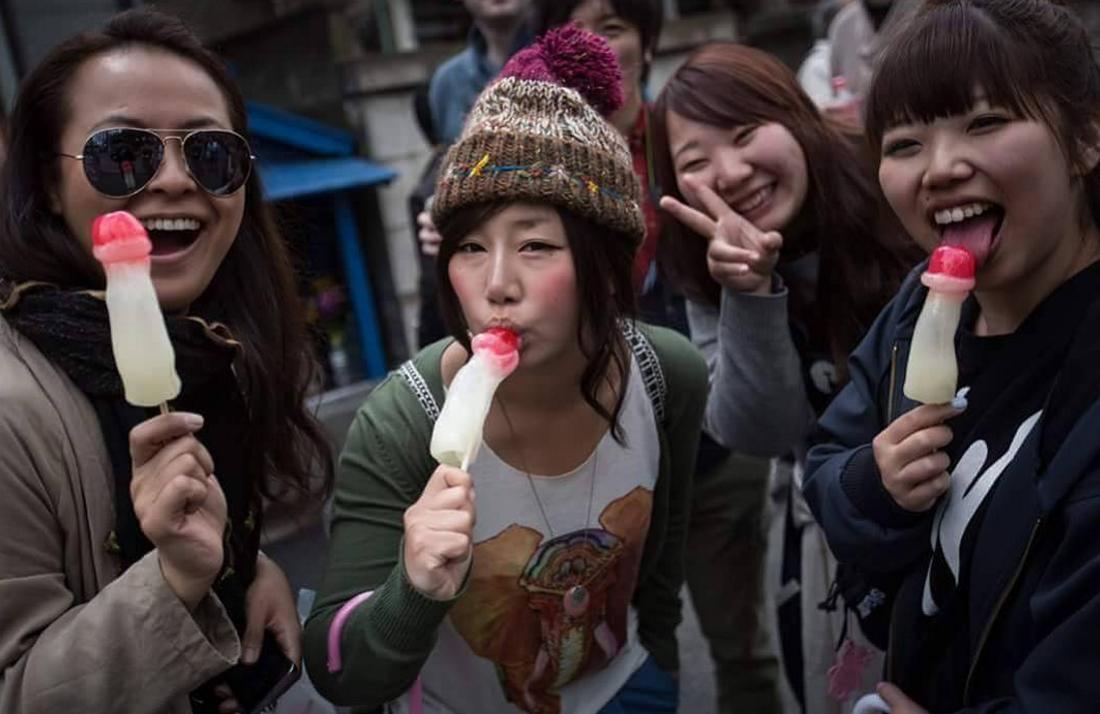 In addition to watching the procession, you can partake in all of the traditional festival foods and activities. Traditional dishes include Yakisoba (stir-fried noodles), Okonomiyaki (savory pancakes), Takoyaki (fried balls of batter with a piece of octopus inside), and the popular Choco banana – the chocolate-dipped fruit takes advantage of its already phallic shape. You can also use social media to celebrate this day. You can, for example, use the hashtag #KanamaraMatsuri to notify your friends and followers that you are also celebrating this important day.

Furthermore, if you are visiting for the Kanamara Matsuri, plan to spend the day before at the Kawasaki Food Festival, which celebrates local foods such as herb sausages, and Dorayaki (pancake sandwiches with a red bean paste inside), cheap desserts, and delicious Japanese craft beers. Get out and explore the surrounding area as well, as there are some interesting sights to see, such as the Daishi Temple and the adjacent streets selling Japanese traditional candy. Moreover, You won't have to worry about finding a place to stay because Kawasaki has a number of affordable hotels and homestays just a short distance from the Kanayama Shrine. If you want to make a day trip of it, you can stay in Tokyo or Yokohama and take a quick train ride to Kawasaki.

How To Get To Kawasaki’s Kanamara Festival

The Kanayama Shrine and Kanamara Festival are only a few minutes' walk from Kawasaki Daishi Station. Many of you will most likely be arriving from central Tokyo, which means you'll need to transfer to Kawasaki Station first. The actual festival is only a short walk from Kawasaki Daishi Station. Because the Kanamara Festival has recently grown in popularity, you should simply follow the crowds.

Nothing beats travel for experiencing "something new," and the Kawasaki Festival is certainly something new to try. Kanamara Matsuri appears to be a "strange" festival, particularly for those who are not used to seeing sexual symbols displayed in public. However, the Japanese and tourists who are able to attend the festival can attest that it is not "sexualized" in any way. Children come with their parents, and they eagerly sample the phallic-shaped candies that abound at the celebration. Regardless of how strange the festival appears, Kanamara Matsuri is a traditional celebration of man's ability to reproduce.

True travelers develop open-mindedness as they travel because there are things, events, that are too "strange" to understand but still exist, such as the Kawasaki Festival. I hope this article has helped you understand the true meaning of Kanamara Matsuri.