Capital Of Slovenia, Ljubljana - The Dragon City Of The Balkans The Capital of Slovenia, Ljubljana is one of the most visited cities in Slovenia, and with good reason. With the twisting Ljubljanica River flowing through the center and around the hill-topping castle, the capital city seems like something out of a fairy tale. Ljubljana views abound in the pedestrian-only Ljubljana Old City, which is adorned with magnificent architecture and cafe-lined cobblestone walkways.

As a result, there are several architectural styles on display. It is highly worth visiting the castle's wonderful Slovenian History Exhibition if you want to learn everything there is to know about the castle and Slovenia's past. The amazing murals in the Chapel of St George, as well as the castle's tall Watchtower, which offers spectacular views of the city, are two of the castle's other key attractions.

Despite the fact that the remainder of the bridge isn't particularly stunning, its completion in 1901 was hailed as a huge triumph owing to the new technological advancements it represented. It was one of the earliest reinforced concrete bridges, with one of the biggest arches for its time. Its spectacular dragon statues have since become a symbol of Ljubljana. 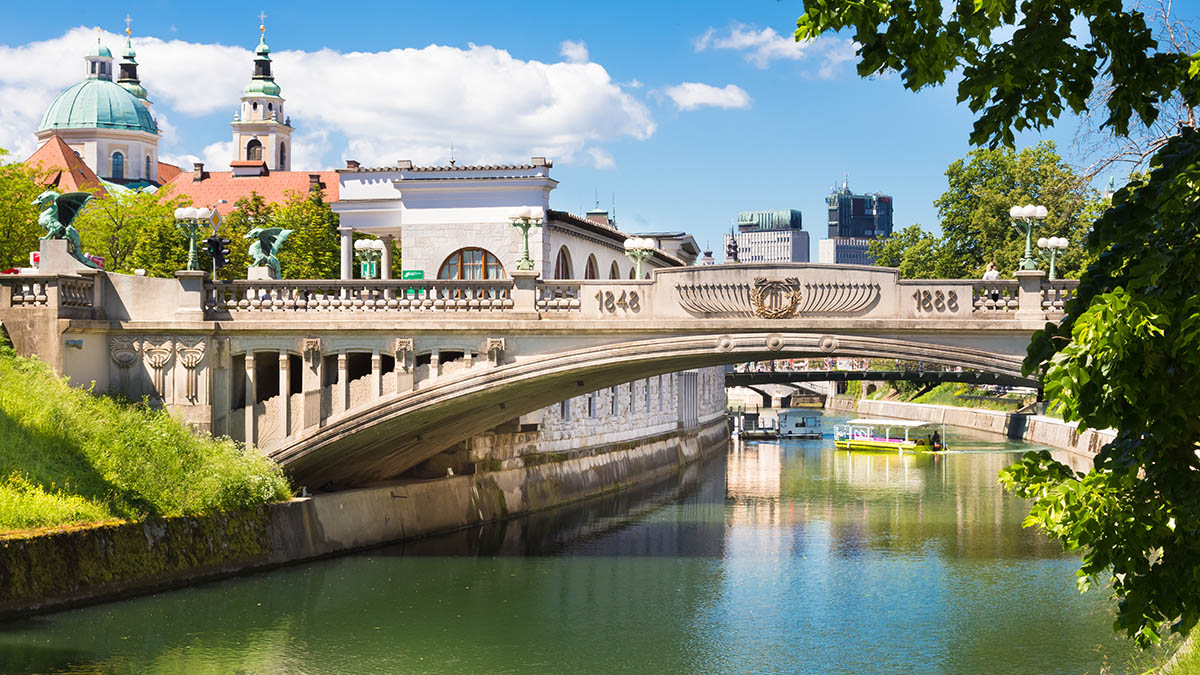 Perched atop a hill and surrounded by trees, Ljubljana Castle looks imperiously out over the Old Town and is one of the city’s main tourist attractions. While archaeological surveys indicate that the mount has remarkably been in continuous use since at least 1200 BC, the castle itself was built in the 11th century, with most of its buildings and fortifications now dating to later centuries.

As a result, there are several architectural styles on display. It is highly worth visiting the castle's wonderful Slovenian History Exhibition if you want to learn everything there is to know about the castle and Slovenia's past. The amazing murals in the Chapel of St George, as well as the castle's tall Watchtower, which offers spectacular views of the city, are two of the castle's other key attractions. 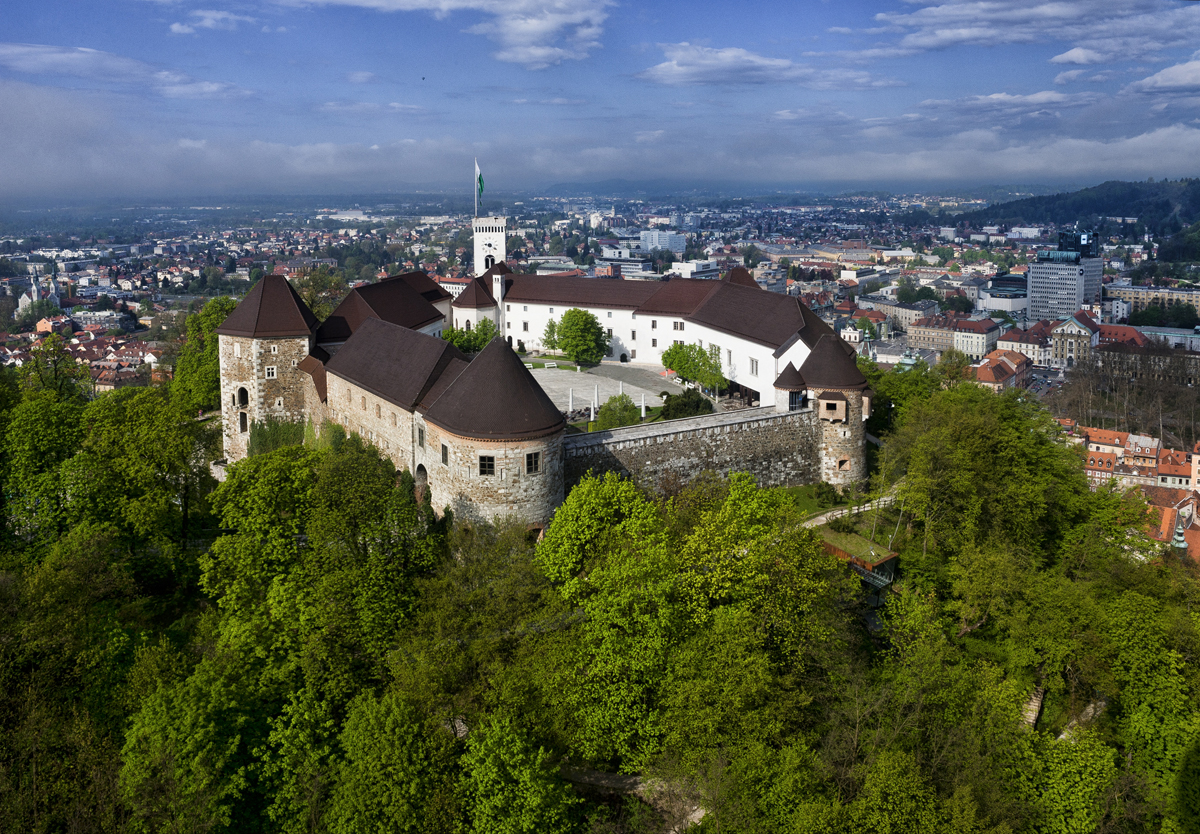 The modest plaza of Gornji Trg, a very tranquil and relaxed portion of the Old Town, looks quite beautiful and attractive with its cobblestones and inviting outdoor patios. The relatively plain-looking Church of St Florian, which was erected all the way back in 1672, is also located on 'Upper Square,' which is lined by some wonderful old medieval structures.

This little part of Ljubljana has many of surprises in store for you, including secret gardens, subterranean cocktail bars, and a small art gallery, as well as a variety of excellent eateries. 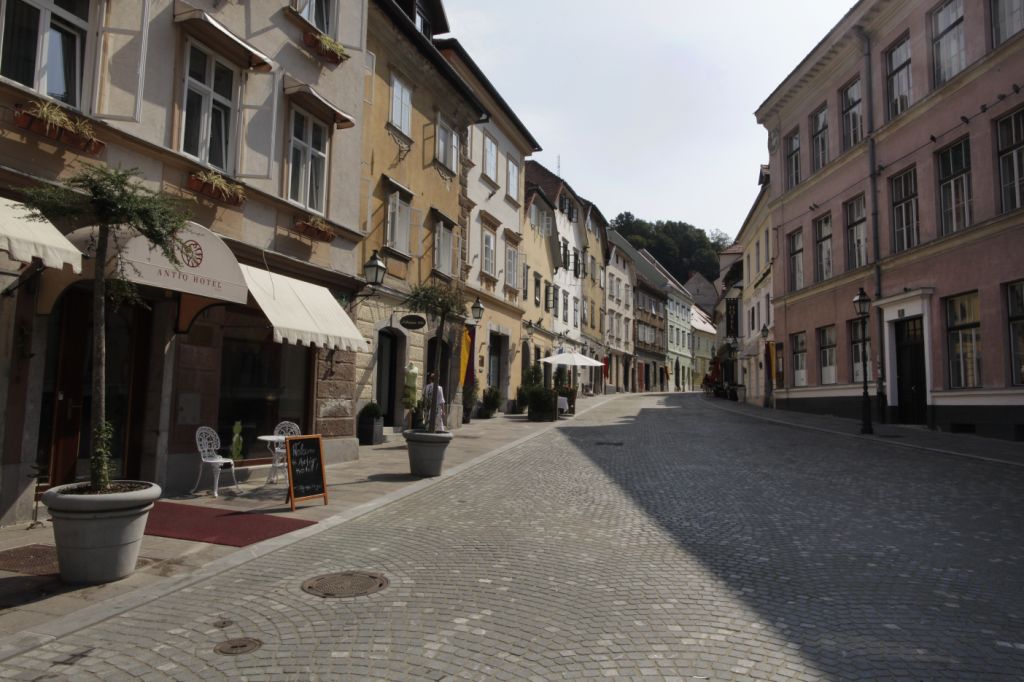 The Franciscan Church of the Annunciation, which is located on Preseren Square, dominates its surroundings in terms of size and color, and is difficult to overlook. The huge edifice, which was built between 1646 and 1660 and is currently painted in eye-catching salmon-pink, is located at a short distance from the Ljubljanica river.

The church, which has a beautiful Baroque exterior and two bell towers set farther back, is one of the most significant in the city and has a sumptuous interior to match. The superb ceiling frescoes were repainted in the 1930s after the old ones were damaged in an earthquake, and the 18th-century altarpiece is another outstanding example. It is highly worth stopping by when seeing the city because it is so near to so many other attractions. 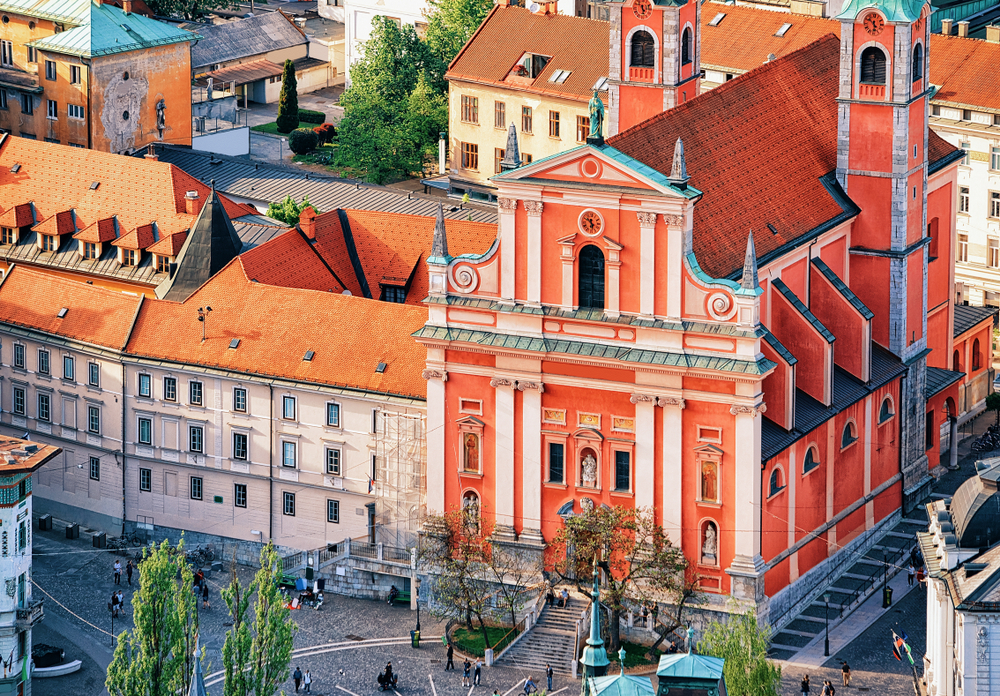 You may be in a green space that stretches for more than two kilometers within a few streets of the Ljubljanica.

This starts with the 1813 groomed gardens and avenues and continues up the hill to the wilder Ronik Hill, which is crisscrossed by natural pathways.

There are elegant homes in the lower levels, such as the Baroque Cekin Mansion, which houses the Contemporary History Museum.

A tropical greenhouse operated by the city's Botanical Gardens lies by a pond in Tivoli Park.

The Jakopi Promenade, an arrow-straight boulevard that extends from the eastern gate up to the Neoclassical Tivoli Castle, is one of the best reasons to visit. 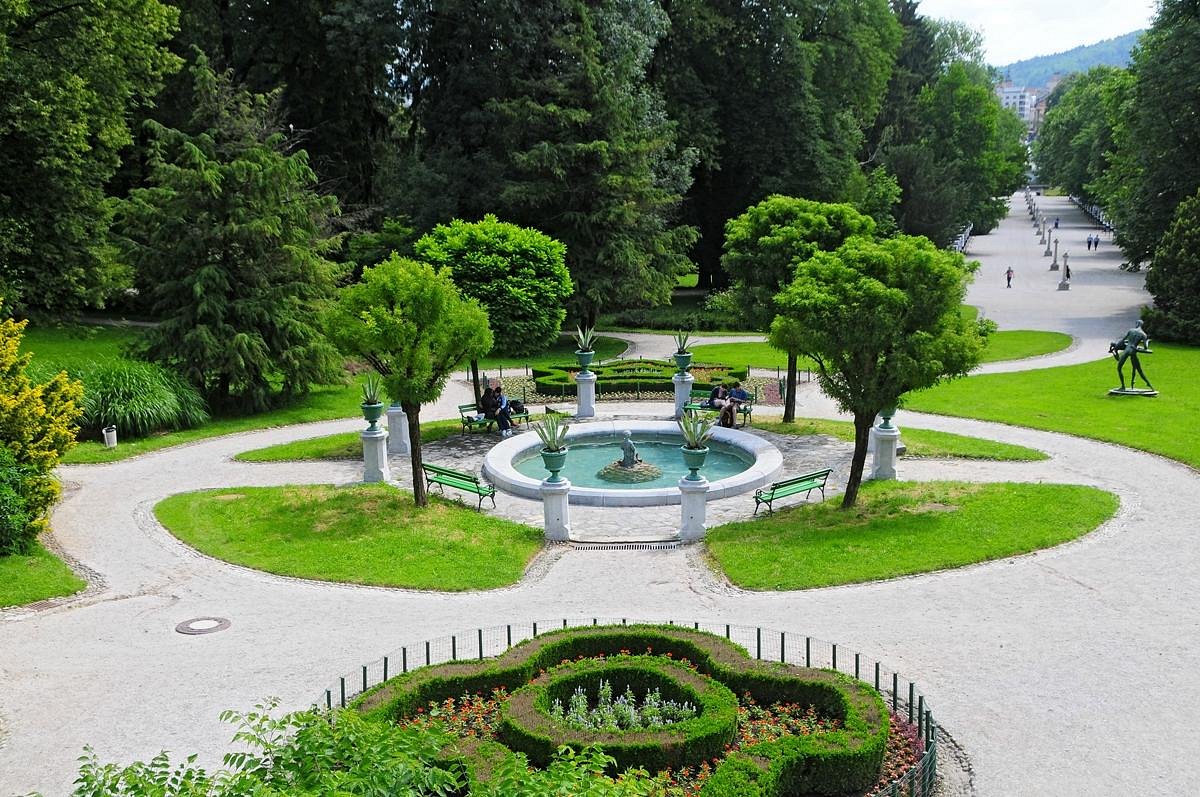 In the early 1930s, Joe Plenik constructed this market as part of a stunning set piece that featured the Triple Bridge.

It runs beside the river between this bridge and the Dragon Bridge, and is built on the site of a former diocesan college for girls that was destroyed in the 1895 earthquake. Stalls selling herbs, spices, and handicrafts are located on the edge of Preeren Square, while bread stalls, cured meat, dried fruit and nuts, dairy goods, fresh fruit and vegetables, and fish are located further down.

The market is open every day except Sunday, with covered parts opening significantly earlier than open-air stalls. 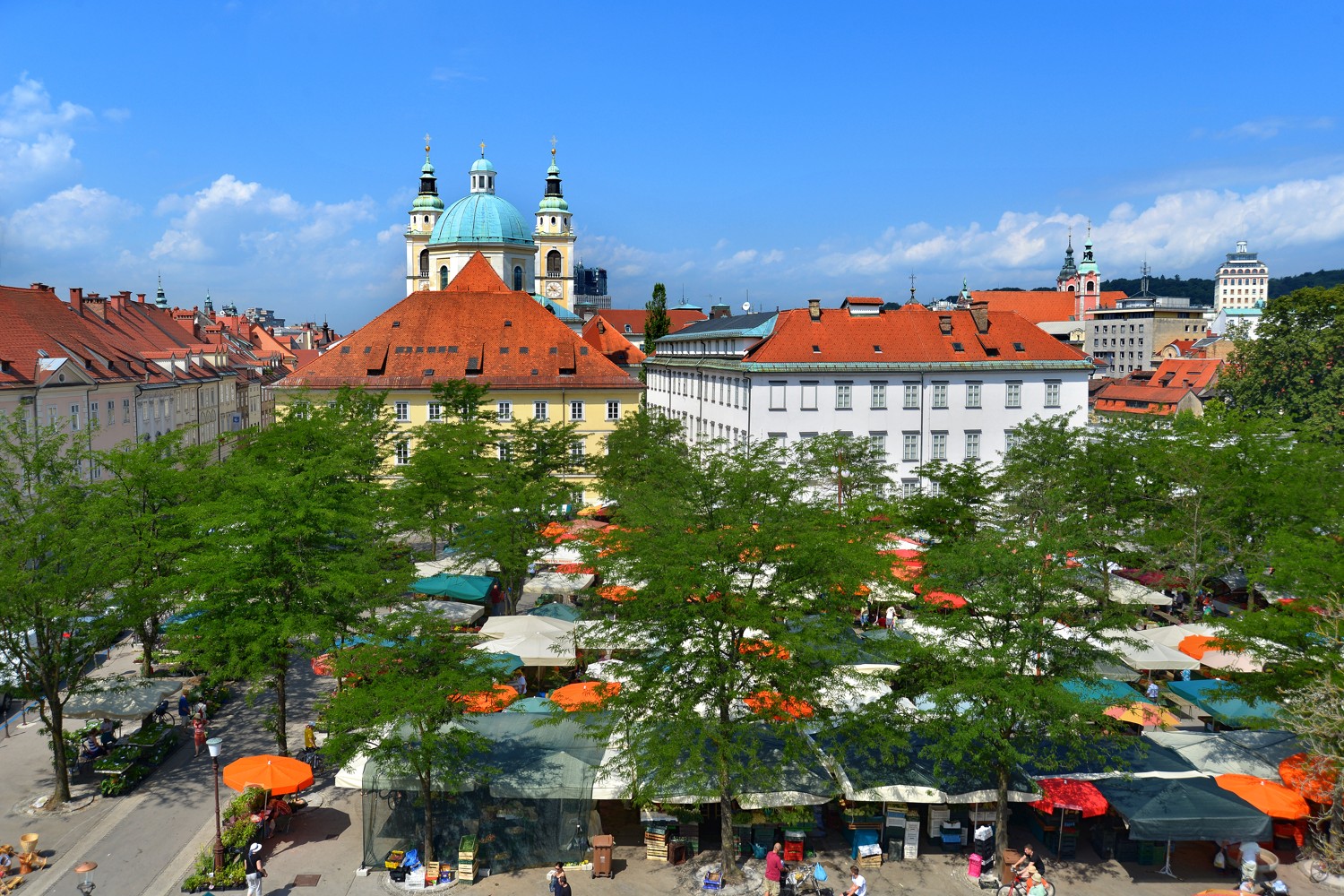 Triple Bridge, in reality, is a series of three bridges that span the Ljubljanica River and link Preseren Square with the Old Town. The bridges, which are located side by side, were created by architect Joze Plecnik, who added lovely stone balustrades that are attractively lighted by gentle lights once night falls.

Although it is strange that the three are so close together, this is due to the addition of two pedestrian bridges in 1930 to supplement the main bridge, which was designed primarily for automobile traffic. In any event, Triple Bridge is a must-see attraction in Ljubljana. Its polished characteristics result in some fantastic photographs. 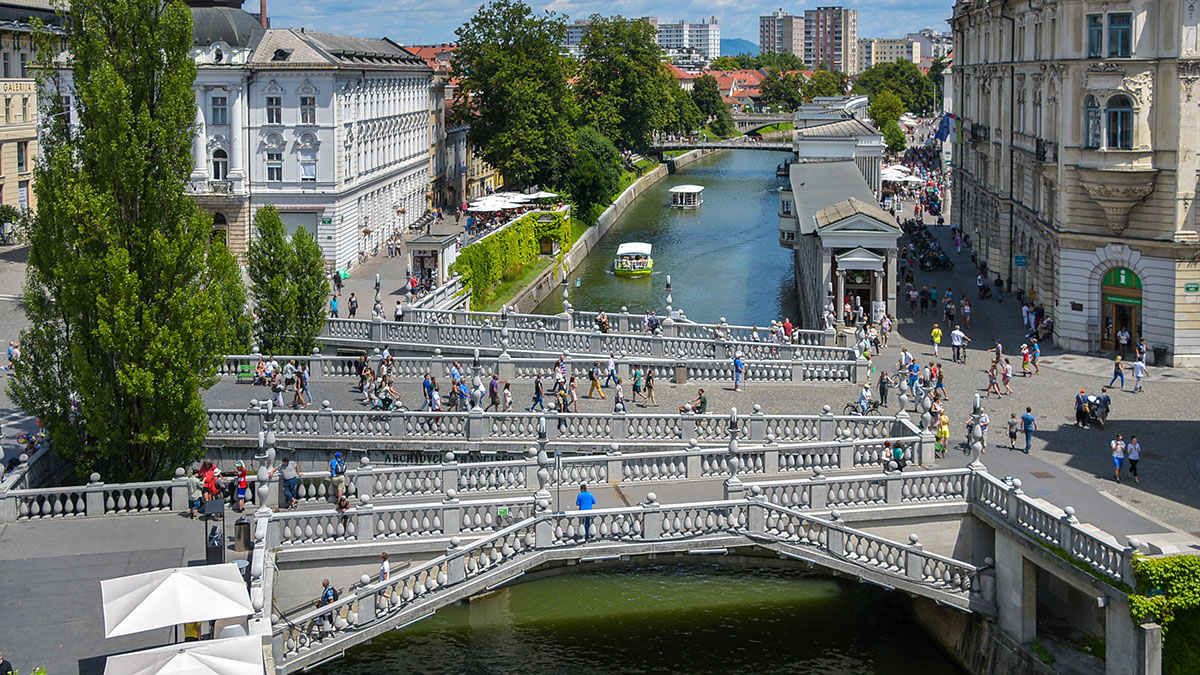 Slovenia's capital, Ljubljana, is one of the smallest capitals in Europe, despite being the country's largest metropolis. What it lacks in size and stature, it more than compensates for with its pleasant, sophisticated, and cool aura. The city is a great destination to visit and is consistently regarded as one of the continent's most livable cities.

There are many charming cafés and restaurants along the lush banks of the Ljubljanica river, which runs through the city, where you can get a bite to eat or a drink. Its Old Town is full of beautiful structures and historical landmarks. Aside from that, there are other wonderful parks, museums, and galleries to visit.

Because of the large student population, there is also a vibrant nightlife scene. Despite the lack of world-famous sites, Ljubljana is a great weekend getaway destination with enough to see and do. You'd better have an excellent reason to visit Ljubljana if you've never there.

What Is Slovenia Most Famous For?

Slovenia is well-known for its stunning scenery, lakes, and dramatic scenery. It is an ideal location for adventurers and nature enthusiasts. This nation has one of the most gorgeous lakes in the world as well as some of Europe's greatest ski resorts.

Which Caves Attract Tourists To Slovenia?

Words on a page can scarcely do justice to the magnificence of Postojna Cave, the biggest cave in the Karst area and Slovenia's most famous tourist destination.

What Can I Do In The Capital Of Slovenia?