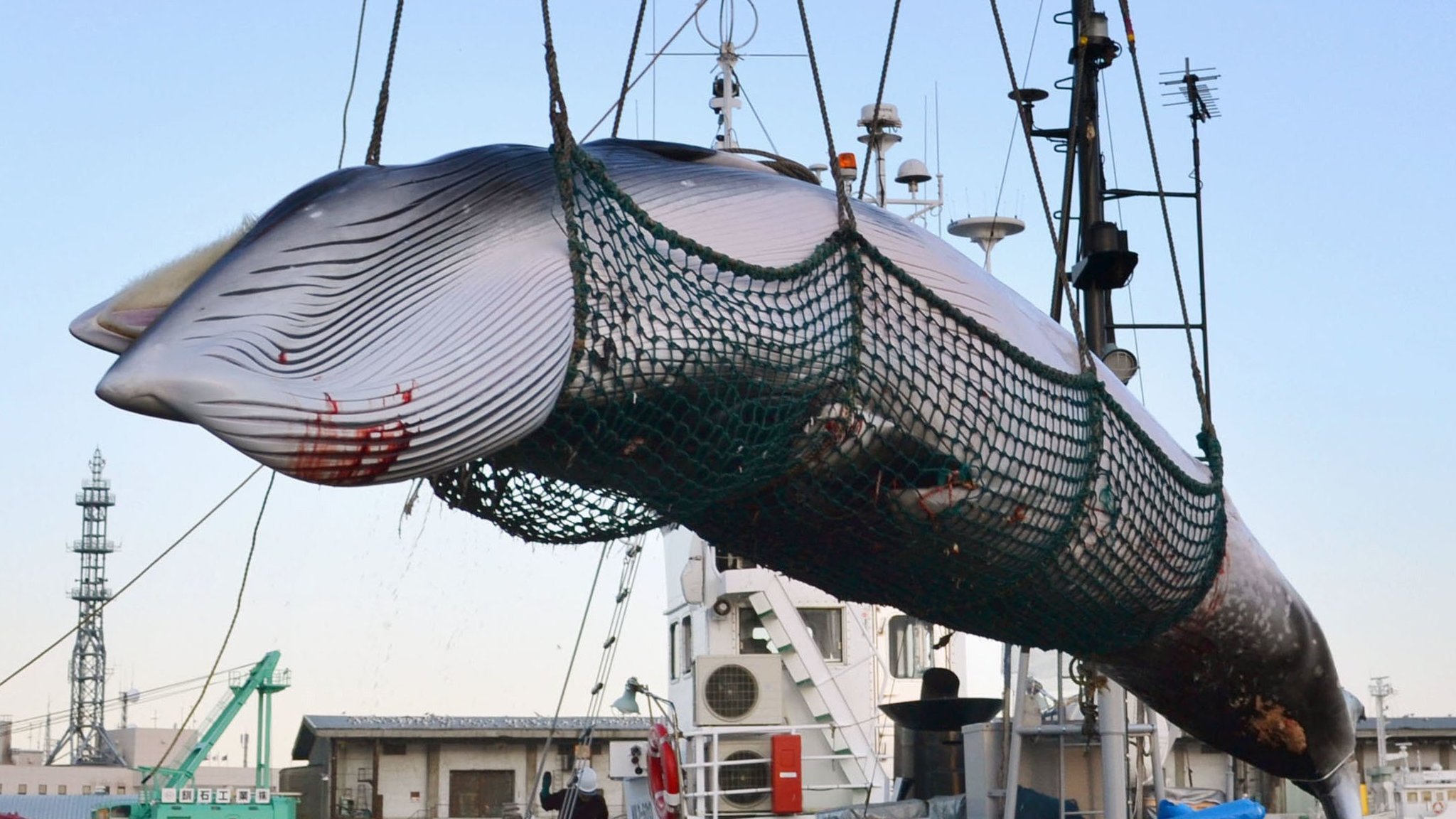 Conservationists from different parts of the world want to boycott Japan whaling.

In defiance of condemnation from the rest of the world, Japan has resumed whale hunting for commercial purposes.

Even though it ended its last hunt for commercial purposes in 1986, Japan has never truly stopped whaling. Instead, it has been conducting what it calls research expeditions, during which it kills hundreds of whales every year.

History Of Whaling In Japan

In the Edo period, whaling began (1603-1867). It was done only when whales came close to the coast, using simple weapons such as nets, lances, and paddle boats to catch them. Only the most affluent merchants and samurai dined on whale meat.

It wasn't until the Industrial Revolution that whales became a worldwide rage. Whale oil was sought for by countries around the world, and Japan did not want to be left out of the action. Several whaling enterprises sprung up around the country, using cannons aboard steam-powered ships to shoot harpoons at whales in the Antarctic Ocean.

After the defeat of Japan in World War II, U.S. General Douglas MacArthur was forced to deal with a nationwide food scarcity and saw an increase in demand for whale products. A whaling expedition to the Antarctic was his solution.

Whaling was cheap because whale meat was plentiful; within two years, whale meat was 46 percent of the Japanese diet's total protein intake. Whale populations around the world were decimated as a result of Japan's and other countries' whale hunting practices, which saw an estimated 3 million whales slaughtered at their height.

However, the boom was short-lived. Western environmental movements and conservation activism in the 1970s prompted governments to take action on whale conservation.

IWC, an international agency that oversees the protection of whales and their management, intended to ban commercial whaling - the very same countries that have contributed to the decline of whale populations around the globe.

The ban was unavoidable for Japan. Furthermore, the United States threatened to impose restrictions on imports of Japanese fisheries goods and reduce Japanese fishing quota in U.S. waters, making it even more difficult for Japan to participate in the International Whaling Commission (IWC).

A moratorium on commercial whaling from 1985 to 1986 was agreed upon by both President Reagan and Japanese Prime Minister Nakasone Yasuhiro at the height of the Ron-Yasu friendship between the two countries at the time.

Japanese whaling did not finish there, nevertheless As of 1987, it was only conducting "scientific whaling" in accordance with IWC-approved programs in Antarctica and the Pacific. Through the Whaling Triangle, a network of pro-whaling groups, influential pro-whalers exert their influence on government policy, this shortcut was made possible.

Ex-government officials and lobbyists in Japan formed the Japanese Fisheries Association and petitioned the government's Fisheries Agency to subsidize whaling operations in order to save the declining business.

Whaling company Kyodo Senpaku was created as the Institute of Cetacean Research, which would hire ships for scientific research. It is only via the sale of "secondary products" like whale products that Kyodo Senpaku can cover the costs of its research facility (and researchers were once caught eating some of it).

Until the moratorium was implemented, whale meat consumption had been declining steadily since the early 1960s.

Because of post-war food shortages, whale meat consumption was relatively high in the post-war era, but as the country became wealthier, the population began to migrate to other more appetizing meats as they became more affordable.

Despite this, whale meat continues to be promoted as part of the national diet. Whaling is undeniably a component of Japanese culture, particularly in certain parts of the country, but whether it can be termed a "national" culture is up for debate given the country's long history of whaling.

Even though commercial whaling was restarted three years ago, it continues to face several difficulties, including reductions in catch limits and government support. Rather than relying on government funding, Kyodo Senpaku has stated that it will aim to build its next $56.4 million whaling ship through crowdsourcing and will provide extra services including assistance with marine research and even ash spreading.

During Japan's 2022 commercial whaling season, which runs from 1 April through the end of the year, two whaling vessels departed Ayukawa Port in Ishinomaki, Miyagi Prefecture, on April 3.

Ayukawa Whale Co., which also runs a physical store and an online shop selling canned whale meat and whale bacon, operates the No. 8 Koei Maru and No. 3 Daikatsu Maru, small "catcher" vessels with a raised sighting platform and a harpoon cannon mounted on the bow. Minke whales will be the primary prey for both ships.

Since Japan left the International Whaling Commission four years ago, it has resumed commercial whaling in Japan (IWC).

IWC's original goal is to rebuild stocks so that whaling can be managed responsibly, as evidenced by an excerpt from the International Convention for the Regulation of Whaling which concludes a convention to provide for the proper conservation of whale stocks and thus make it possible for the orderly development of whale hunting."

In spite of this, Japan claims that IWC members with anti-whaling sentiment have prevented the restart of whaling even for stocks with acceptable numbers. With the exception of subsistence whaling by indigenous people, the country's position is that the IWC's current function is to eradicate the whaling industry.

The "scientific whaling" operation that Japan ran in Antarctic waters and the North Pacific for many years got around the country's commercial whaling ban.

In 2019, Japan started commercial whaling in its own exclusive economic zone following its departure from the International Whaling Commission (IWC) (EEZ). Non-lethal visual surveys to determine abundance and stock structure are the mainstay of Japanese scientific effort in Antarctic waters.

Other nations, like indigenous communities in the United States and Canada who hunt belugas and narwhals, and the Faroe Islands, who capture pilot whales, also continue to hunt tiny cetaceans like dolphins and pilot whales in their own waters.

According to the IWC's website, tiny cetaceans are not included in the organization's classification of "great whales." The International Whaling Commission (IWC) provides funding and support for small cetacean research and conservation projects, but it does not regulate small cetacean hunting.

Why Is Whaling Not Banned In Japan?

Although the Antarctic minke whale population has fallen since the start of the JARPA ( Joint Aquatic Resources Permit Application ) program and those whales killed have displayed rising indications of stress, Japan argues that annual whaling is sustainable and required for scientific study and management of whale stocks.

How Many Whales Have Japan Killed By 2021?

The quotas for the whale-hunting season in 2021 was announced by the Japanese government. There were a total of 383 whales slaughtered, with 171 minke whales, 187 Bryde's whales, and 25 Sei whales making up the total. Despite the country's declining appetite for meat, hunters continue their hunts.

Whale meat consumption in Japan, a nation with a long history of hunting whales, is gradually declining as whale watching becomes more popular.

Minke, Bryde's, and Sei whales will be allowed to be hunted by the ministry. Minke and Bryde's whales are not on the IUCN Red List of Threatened Species. Sei whales are listed as endangered, but their population is growing. Therefore, the impact on numbers will be minor. According to whaling proponents, whale food actually has a lower carbon footprint than meat from pork or beef.