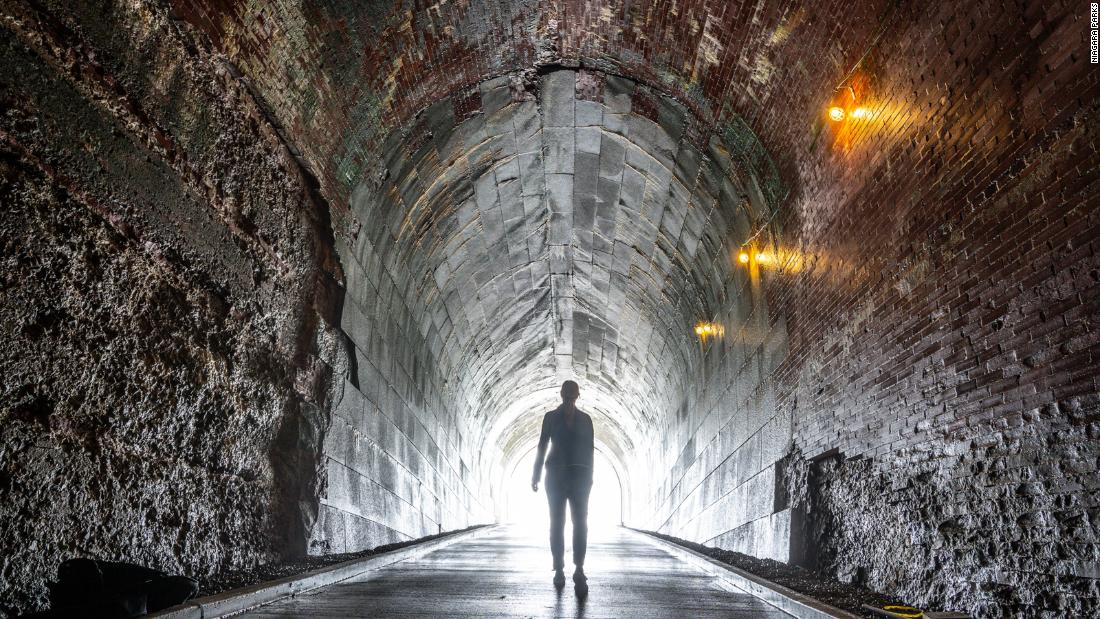 A brand-new place of interest is now open as a massive tunnel has opened beneath Niagara Falls. Because of this, visitors are able to explore the tunnel that was built by an electricity-generating company to harness hydropower from the rapidly moving waters that make up the landmark.

Since at least the early nineteenth century, Niagara Falls has served as a magnet for tourists from all over the world, attracting notable visitors such as Mark Twain and Marilyn Monroe, amongst others. But up until this year, a massive tunnel that is buried quite a distance beneath the waterfall was off-limits to tourists.

And now, on the Canadian side, a 670-meter (2,198-foot) tunnel built more than a century ago has been opened up to reveal the incredible scale of these engineering marvels.

It has been included in tours of the decommissioned Niagara Parks Power Station, which began a year earlier, since July 2022. Exploring it provides an intriguing look at the pioneering work that helped bring this part of North America into the modern era.

The power station, which operated from 1905 to 2006, diverted water from the mighty Niagara River to power massive generators that electrified regional industry and helped Buffalo, a nearby Great Lakes port, earn the nickname "City of Light."

According to station tour guide Elena Zoric, the area around the waterfall was once a hub of activity for businessmen looking to profit from hydropower.

The Adams hydroelectric power plant was the first to open, operating from 1895 to 1961 on the US side. The Ontario Power Company operated in Canada from 1905 to 1999, and the Toronto Power Generating Station from 1906 to 1974.

The Niagara Parks station is the world's only fully intact hydroelectric plant from the time period. It was originally run by the Canadian Niagara Power Company and used Westinghouse generators to generate alternating currents patented by inventor Nikola Tesla - cutting-edge technology at the time.

According to tour guide Zoric, the plant was built at a time when aesthetics were paramount. Its rustic limestone exterior and blue roof tiles, she claims, were an attempt by New York architect Algernon S. Bell to blend in with the falls.

Visitors to the power station are shown a scale model of the massive engineering work that went into converting the pounding waters into electricity before entering the tunnel.

Zoric demonstrates where the water came in, where it ran down a shaft to power the turbines, and then where it went through a tunnel to a discharge point at the base of Horseshoe Falls, Niagara's largest cascade.

The Niagara Parks Commission's senior director of engineering and operations, Marcelo Gruosso, has been involved with the project since it was first conceived in 2017.

"The plant started out with two generators and, by 1924, all 11 were installed, which you see here today," he says as he walks through the high-ceilinged building, pointing out a line of blue, cylindrical generators that fill the space.

"Beside every generator is a 'governor' which regulated the waterflow to a turbine. An air brake in the governor helped adjust the flow. They needed 250 rpm exactly to give them 25 hertz."

Visitors descend 55 meters in a glass elevator past the six levels of infrastructure necessary for the hydropower generation process. The tunnel where the water would leave is at the bottom.

The admission fee to the power plant includes admission to the tunnel, a historic attraction that is one of a kind and almost eight meters tall and six meters wide.

It took thousands of workers four years to excavate the shale beneath the main generating room using lanterns, dynamite, pickaxes and shovels. On its way down, the water would spin the turbine blades. They were connected to a 41-meter-long shaft that went all the way back up to the main floor and spun the rotor in the alternator, generating the AC power.

The air starts to rumble as the tunnel draws to a close. The path leads to a 20-meter, river-level viewing platform that is almost at the base of Horseshoe Falls, where natural light floods in. In order to be heard over the constant pounding, Gruosso must shout.

This is where the water from the tunnel poured into the river. It's the best place to see the falls.

The power station and tunnel can be visited in about two hours, but an overnight stay is advised if you want to see the evening show. The lodging options range from luxurious Fallsview hotels like the Hilton to cost-effective lodging options like the Days Inn.

In terms of dining, Niagara Falls used to be purely a hotdog and fries town. Fast food is still a thing, but restaurant has improved. Restaurants within Niagara Parks, like Table Rock House Restaurant, as well as independent eateries, like AG, which serves food from its own farm, offer chef-inspired, regionally sourced menus.

The Niagara Parkway, which follows the Niagara River and can be explored on foot or with a rented e-bike, is also noteworthy. Whirlpool Lookout Point and the Sir Adam Beck Generating Station, a massive building alongside the river that currently contributes to southern Ontario's electrical grid, are two stops along the route.

There are many ways that visiting Niagara Falls can energize you. It is a beautiful natural setting, but it may also cause you to reevaluate the natural forces that continue to influence our contemporary lives.