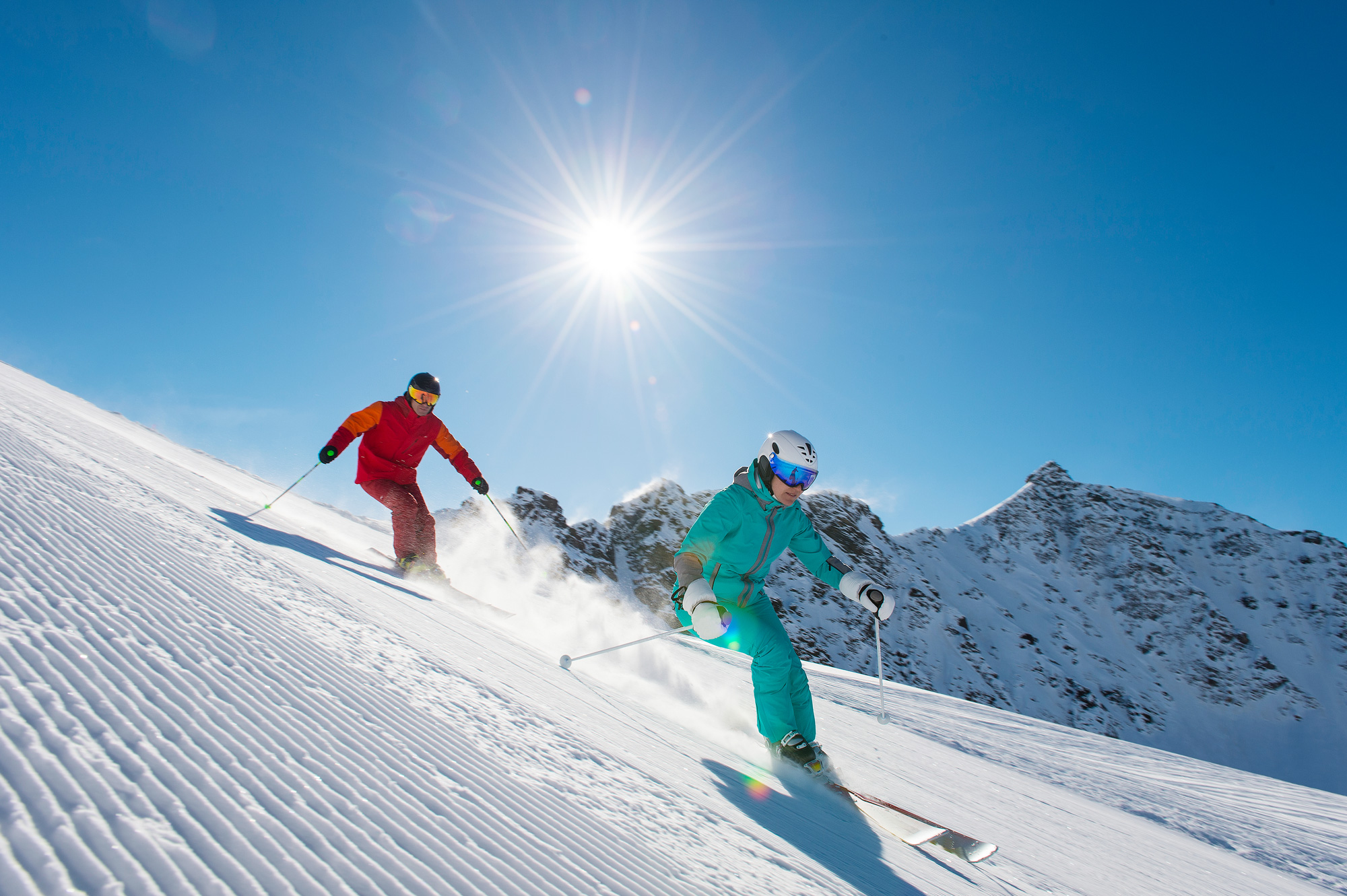 France has over 8,000 km of pistes in seven major ski areas, the Northern and the Southern Alps, the Pyrenees, the Vosges, the Jura, Massif Central and even Corsica - all with the latest facilities, including ski schools and guides. The best area is the Alps, with reliable snow conditions, the friendlier environment in the Jura and Massif Central are excellent for Cross-country skiing. The snowboarding population and facilities are growing all areas, too.

Most French resorts are convenient and efficient, but compared to the smaller, picturesque lodges in Switzerland or Austria some of purpose-built establishments can be characterless but French ski chalets can be delightful and excellent value.

The ski season runs from the end of November to mid-April, depending on the altitudes; the peak is Christmas to March. Not a cheap activity of course, the best value is to get a package deal including accommodation and lift ticket/pass.

This world-famous resort sits on the upper slopes of Mont Blanc in the Rhone-Alpes region of south-east France. It incorporates some demanding pistes that are ideal for experienced skiers as well as slopes for less advanced skiers. See Chamonix resort guide.

Chamonix is also favoured by adrenalin junkies of other persuasions, both summer and winter. Among the possible Chamonix activities are ice-climbing, extreme skiing, alpine mountaineering, paragliding, mountain biking, canyoning and white-water sports.

Val has been one of the world's top ski areas for decades and with recent years' improvements including child care facilities and better staff attitudes, as well as technical upgrades and slope grooming, this remote valley resort is more popular than ever. In the last few years some lower resorts have suffered catastrophic shortages of snow but not high-altitude Tignes/Val d'lsère with slopes ranging from 1850m to 3600m.

The good news is that Val's high altitude guarantees snow and there is a wide choice of everything, from pistes and runs to lessons and guides, from accommodation to restaurants and a lively night life. The massive ski area shared with Tignes offers plenty of runs to suit all abilities, a wide selection of schools and once decent snow has fallen the altitude maintains it perfectly.

The bad news is crowds in high season, rather too many of them being British, restaurants on pistes are unimpressive, you'll probably need a bus to get to/from the slopes to your hotel (though they run frequently) and there are some really unattractive buildings around, particularly on the outskirts. Finally eating and drinking here is costly, Val d'lsère is one of the most expensive ski resorts in France.

Tignes has superb glacier skiing and is linked to Val d'lsère. Both resorts offer runs to suit all levels of skier or snowboarder but differ considerably in terms of accommodation and apres-ski facilities. Val has a traditional ski-resort ambience whereas Tignes is newer and divided into separate communities at different altitudes. Tignes resort guide, Val d'Isere resort guide.

Flaine is neither high altitude nor sophisticated but it's family-friendly, relatively low-cost and due to its proximity to Mont Blanc it has an unusually good record for snow. The Grand Massif ski area provides superb skiing, both on and off piste. Flaine resort guide.

Courchevel encompasses four villages at different altitudes. 1850 (name and altitude) is the upper end that plays host to a lot of Russians, 1650 has lower prices and more of a French accent, 1550 is small and quiet and at the bottom end in terms of both price and altitude is 1300 (Le Praz), popular with families.

Les Trois Vallées is a cluster of resort towns including Courchevel, Méribel, Val Thorens and Les Menuires that covers 600km of pistes served by 165 lifts. It's the largest ski area in the world, with an excellent network between each village, pistes and lifts. Courchevel resort guide.

Near Flaine, this traditional French Alpine village is a gondola ride from the 265km of pistes at the Grand Massif ski area. The centre of the village is car free, with medieval buildings, a church, bric-a-brac shops and interior design boutiques.

20 miles southeast of Geneva, La Clusaz is a pretty mountain village scattered with traditional alpine chalets. The slopes are below 2,500m so the snow is not always reliable but there are plenty of snow-making machines. The resort has some black runs, as well as a bus service to the pistes at Le Grand-Bornand.

Close to the Italian border, this small village is connected to one end of the massive Milky Way ski area. Montgenèvre is unpretentious with a good selection of reasonably priced cafés, bars and restaurants. There's a wide variation of runs ranging from beginners and experts and the area generally sees reliable snow record as it's at an altitude of 1,850m. You can ski to nearby Italian resorts.

This is a part of the busy Three Valleys ski region but the farming village of St-Martin-de-Belleville is very different from other resorts. St-Martin-de-Belleville embraces some fine traditional Savoyard buildings and several restaurants with Michelin stars but feels like an isolated place, yet visitors have access to some of the best pistes.

This little ski resort near Bourg-Saint-Maurice is popular with off-piste fansdue to its challenging slopes and some ungroomed runs. That being said there are also pistes for beginners and for families. With a ski pass from Sainte Foy you can get discounts on other nearby resorts such as Val d'Isère and Les Arcs.