France Beaches Guide And Tips For Your Travel Getaway This Summer 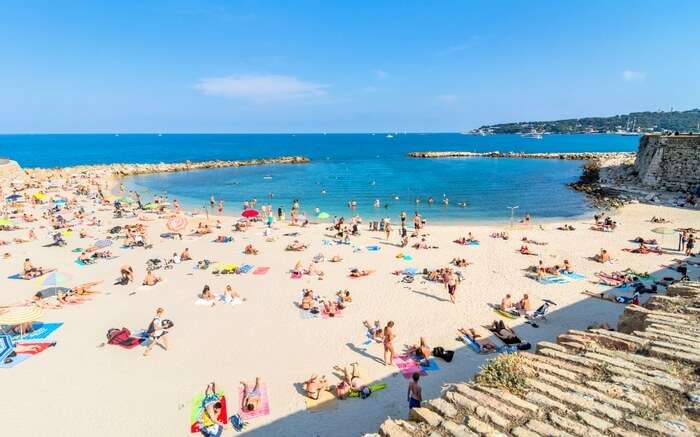 When it comes to beaches around the world, France has the best offer. Considering the factors listed in this article can help you in determining which beach in France has the biggest effect on you personally and you want to visit.

Let's take a look at some of them.

Does France Have Nice Beaches

France has a huge number of beaches because it has a lot of coastlines that borders the Mediterranean Sea, the Atlantic Ocean, and the English Channel. This gives the country a lot of beaches.

Where Are The Best French Beaches

Because the French mainland is surrounded by water on three sides, it has a beach for everyone, from families to superstars, world-class surfers to naked people.

The Côte d'Azur (the blue coast) runs from Marseilles in the west to Menton in the east. The French Riviera is the posh eastern part, from Cannes to Menton.

France's Riviera (Riviera map) is the place to go if you want a tan in a busy social hotspot with warm water. If you want to be alone or surf in cool water, go to the south Atlantic coast (e.g. the Bay of Biscay's Biarritz) or the Mediterranean island of Corsica. These places have great beaches and great hiking.

If you're looking for a beach with a lot of amenities and few dangers, most of the beaches in France are well-kept and well-equipped. Northwest Atlantic beaches tend to be colder and rougher than the Mediterranean beaches in the south. 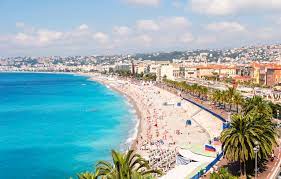 If you want to enjoy a great climate, a lot of fun, and a lot of good food and drink, the east coast of the Mediterranean from Menton (east, near Italy) to Cannes (west) is the place. The beaches can be small, rocky, or pay-as-you-tan, and the traffic and parking can be a real mess.

We like Nice for its lively, not-so-touristy life, the great promenade, but pebble beaches. Cannes has fine sand, great summer fireworks (get close and early!), and beach restaurants, but it has pebble beaches (the best are west of the port).

Smaller and less classy, Antibes has a great beach and a great walk around the Cap d'Antibes. Plage de la Garoupe is a great place to eat and drink.There are very few sands at Juan-les-Pins, and they're very popular for watersports.

A good deal for a new look, but still a good deal.Villeneuve-Loubet is between Antibes and Cagnes-sur-Mer, and it's a great place to be because it's easy to get to, has a good pebble beach, and has a lot of things for families to do.

The small town of Menton, which is far east and next to Italy, is about as quiet as the Riviera gets. Some people think it's dull or even dead. 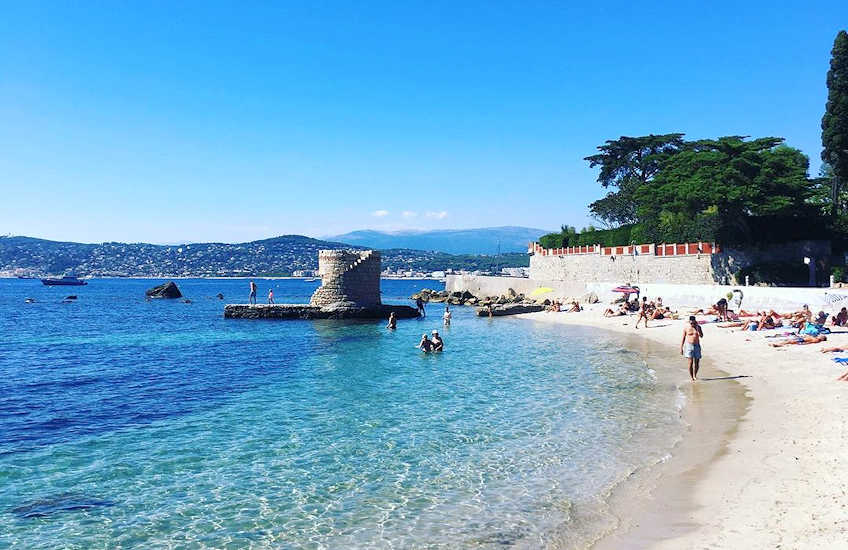 There are a lot of things that make this look like it's not the Mediterranean coast. It goes from Italy to the coastal bend and islands at Hyeres (map).

St. Tropez is a sugar daddy destination that has a lot of great beaches. The Baie de Pampelonne beaches in St. Tropez are the best for big-money sex, and Nikki Beach is the place to be if you're looking for a lot of bling.

It doesn't matter if all the bling and attention to fat cats doesn't make you want to go. You can go back to St Maxime or 15 km south-west to Gigaro, where the beach is narrow but the beachside restaurants and hotels are good value and welcoming. The water there is clear and there's a beautiful coastal trail that starts at the corner of the bay. For people who don't want to spend a lot of money, this hotel is a good place to start.

Finally, 32 km away in Cassis, the picture-perfect Plage de l'Arene is a turquoise bay of fine silver shale surrounded by white cliffs and trees. The beaches in Marseilles aren't as good as the beaches on the Côte d'Azur, but they're still worth a visit.

If you want to rent a luxury yacht in the Mediterranean, look here. 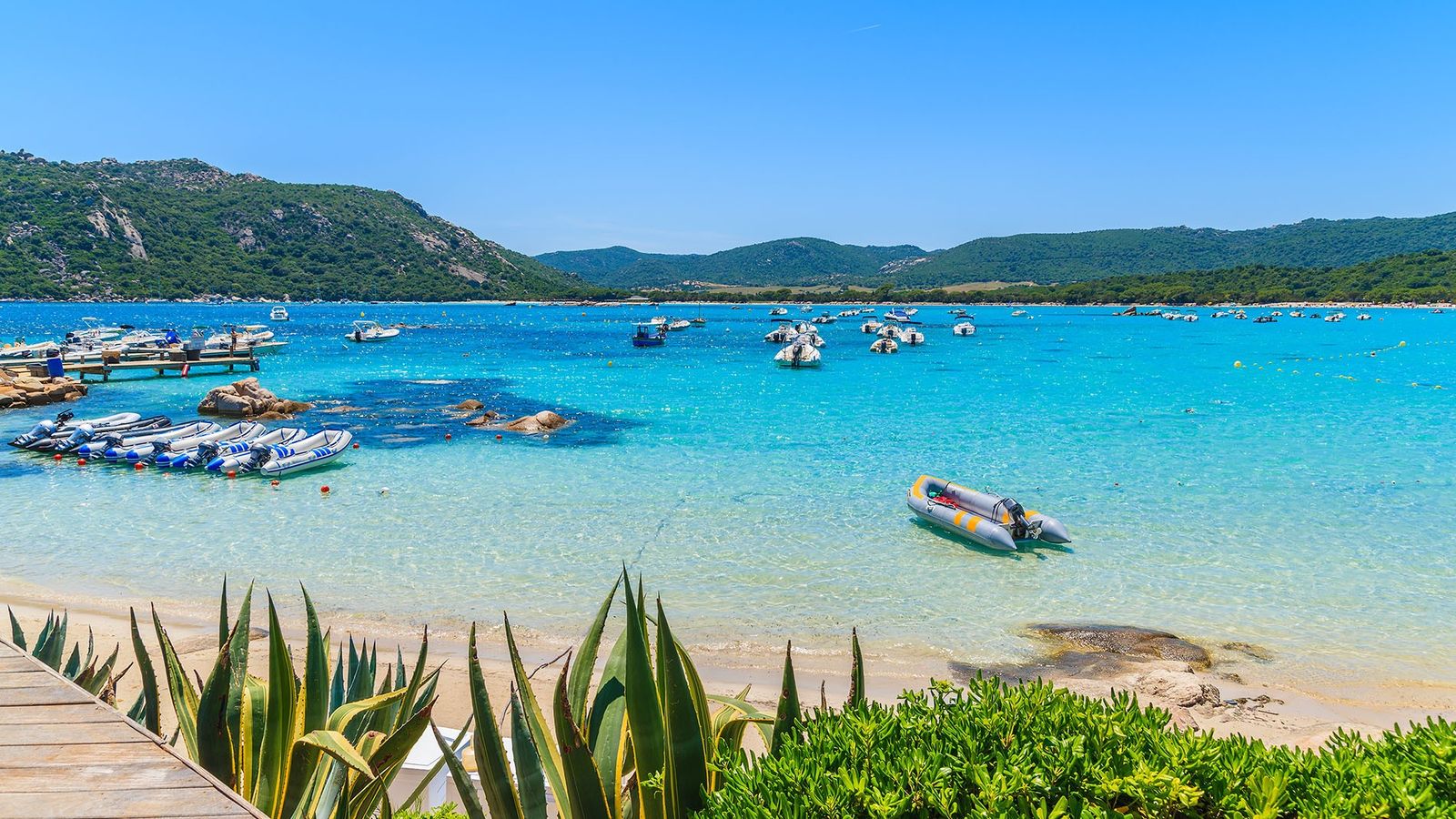 The Corsica beach with mini boats surrounded by mountains

Corsica Island is in the middle of the Mediterranean, and it has some of the best beaches and best walks in the world.

You should note that if you want warm water, the Mediterranean beaches from June to September are pleasant, but they don't compare to beaches in the Caribbean or Pacific, or Indian Oceans.

On the Atlantic coast near Bordeaux, there is a small and lovely resort surrounded by France's biggest pine forest. It has small and lovely beaches, but a few kilometers south is the Dune du Pyla, Europe's biggest sand dune, which is more than 100m (350ft) high and long.

It's about 200 miles of beach south of Arcachon to Biarritz, but there aren't a lot of places to stay.

Biarritz is a big town in the southwest of France. It has a lot of great buildings, good seafood, big sandy beaches, and good waves, but also cold Atlantic water, a breeze, and a lot of sea mist.

An old Basque town about 20 minutes south of Biarritz and about as far south on France's Atlantic coast as you can get is peaceful and pedestrian-friendly. It has a beautiful seafront with old basque houses and fine sand. However, Biarritz has its downsides, too.

3 km from the old town of Seignosse, this is a newer beach resort with 6 km of sand that's been beaten by waves and surrounded by a dune. It has everything you need for families and surfers, from surf schools to a water park and cycle paths through the woods.

There is a train to Bayonne, then a bus or taxi to Seignosse. Bordeaux is south of Seignosse.

One of the most beautiful seaside towns in France is a charming town on the Atlantic coast.In this area, there are miles and miles of safe sandy beaches. They are especially good for young families because the water is shallow and they are easy for them to swim in.

The longest stretch of sand in Europe is on a beach in Brittany that is 8 miles long and curves around.Nowhere near as classy as the French Riviera, and beware of toxic seaweed, but its cheap facilities make it a good choice for a trip with kids.

You can surf at Brétignolles-sur-Mer on the Vendée coast. The town of Brétignole is a popular destination for people who want to go to the beach and swim in rocky coves.

A small island off the coast of Brittany has a lot of beautiful beaches and coves that are both fine sand and beautiful.

The Three (3) Best Resorts In France:

What Is The Price For Beach Resorts In France

At least one French beach resort has been on sale for $69 over the last 30 days; they usually cost more than that.

There may not be all taxes and fees included in these prices. They are the average nightly rate that their partners give them. You can't be sure how much taxes and fees will be.

As a rule, learning a few words and phrases of French will help a tourist have a better relationship with locals, read menus, or talk about the weather. People who live in France, its colonies, or even its ex-colonies can enjoy their lives more if they learn French.

We can relieve tension by going to the beach this summer. If you're looking for the warmest beaches, the French Riviera beaches are an excellent choice!

Book sooner to sample their delicious cuisine and learn about their culture. Have a fantastic time and enjoy your trip!