Bosnia & Herzegovina Tour - Be Captivated To This Heart Shaped Land 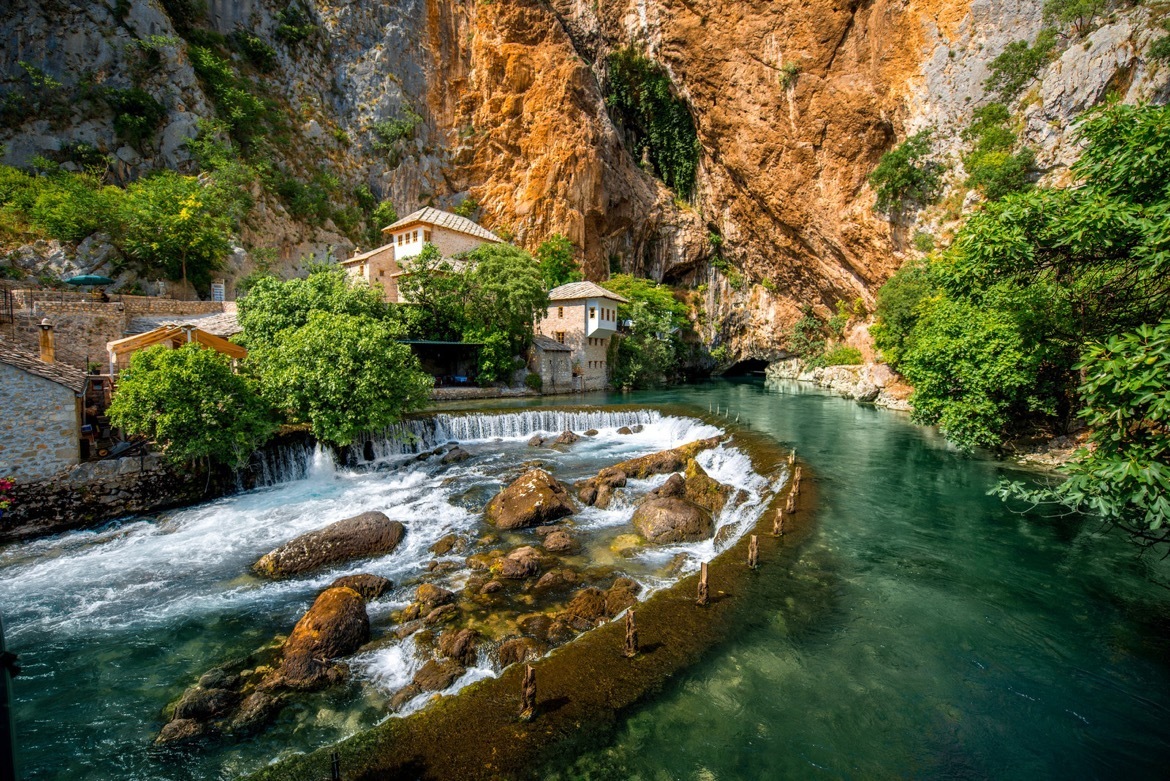 Wondering about your Bosnia & Herzegovina tour? Well, you came to the right place.

Bosnia and Herzegovina is a popular tourist destination due to its century-old ancient cities, spectacular natural beauty, thrilling attractions, and unique religious culture.

We will talk about the things you need to know about this place and a list of the greatest sites to visit in Bosnia and Herzegovina.

Bosnia and Herzegovina, sometimes known as Bosnia–Herzegovina and informally as Bosnia, is a Balkan country located in the crossroads of south and southeast Europe.

The terrain of the country is mountainous in the central and eastern areas, fairly hilly in the northwest, and mostly flat in the northeast. Herzegovina, the country's smaller, southern portion, has a Mediterranean climate and is primarily mountainous.

The territory that is now Bosnia and Herzegovina has been inhabited by humans since at least the Upper Paleolithic, but evidence suggests that permanent human settlements were created during the Neolithic period, including those belonging to the Butmir, Kakanj, and Vuedol cultures.

Several Illyrian and Celtic civilizations settled in the area after the advent of the earliest Indo-Europeans. The country has a rich and varied cultural, political, and social history.

The ancestors of the South Slavic peoples who live in the area now arrived between the sixth and ninth centuries. The Banate of Bosnia was created in the 12th century, and by the 14th century, it had grown into the Kingdom of Bosnia.

It was acquired by the Ottoman Empire in the mid-15th century and remained under its dominion until the late 19th century. The Ottomans introduced Islam to the region, transforming the country's cultural and social viewpoint.

The country was absorbed into the Austro-Hungarian monarchy from the late nineteenth century until World War I. Bosnia and Herzegovina was a province of the Kingdom of Yugoslavia during the interwar period.

It was accorded full republic status in the newly founded Socialist Federal Republic of Yugoslavia following World War II. Following the disintegration of Yugoslavia in 1992, the republic declared independence.

Following this was the Bosnian War, which lasted until late 1995 and was ended with the signing of the Dayton Agreement.

Today, the country is home to three major ethnic groups, referred to in the constitution as "constituent peoples." Bosniaks are the most numerous of the three ethnic groups, followed by Serbs and Croats.

In English, all Bosnians, regardless of ethnicity, are referred to as Bosnians. Minorities classified as "others" in the constitution include Jews, Roma, Albanians, Montenegrins, Ukrainians, and Turks.

Bosnia and Herzegovina is bounded to the east by Serbia, to the southeast by Montenegro, and to the north and southwest by Croatia.

It is not fully landlocked; towards the south, it has a 20-kilometer (12-mile)-long Adriatic Sea coast within the Mediterranean that borders the town of Neum.

These historical districts do not correspond to the two autonomous political entities formed by the Dayton Accords of 1995: the Republika Srpska (Bosnian Serb Republic) in the north and east, and the Federation of Bosnia and Herzegovina in the west and center. Sarajevo is the country's capital, and Mostar and Banja Luka are prominent regional cities.

Sarajevo is the capital and largest city.

Sarajevo is Bosnia and Herzegovina's largest city, with a population of 275,524 within its administrative boundaries. The Sarajevo metropolitan region, which includes Sarajevo Canton, East Sarajevo, and adjacent municipalities, has a population of 555,210 people.

It is situated along the Miljacka River in the heart of the Balkans, a region of Southern Europe, and is located within the broader Sarajevo valley of Bosnia. It is surrounded by the Dinaric Alps.

Sarajevo is Bosnia and Herzegovina's political, financial, social, and cultural hub, as well as a notable cultural center in the Balkans, with regional impact in entertainment, media, fashion, and the arts.

Sarajevo is frequently referred to as the "Jerusalem of Europe" or "Jerusalem of the Balkans" because of its long history of religious and cultural diversity. It is one of the few big European cities having a mosque, a Catholic church, an Orthodox church, and a synagogue all in the same neighborhood.

Central European Time (CET: UTC+01:00) is the only time zone that is observed in Bosnia and Herzegovina.

This time zone is used across the country. In addition, during the summer months, it transitions to Central European Summer Time, which is two hours ahead of UTC time.

Since the system was first implemented in the former Socialist Federal Republic of Yugoslavia in 1983, the transition to Daylight Saving Time (DST) has always occurred on the date that is designated for European Summer Time.

Start your Bosnia journey in Una National Park, which is 90 minutes from Plitvice Lakes.

The park was established in 2008 to safeguard the Krka, Unac, and Upper Una rivers, flora and animals, waterfalls, and archaeological monuments.

There are also the equally spectacular Milancev Buk waterfall, a network of walking routes joining the Japod Islands, the Sultan Ahmed I Mosque in old Kulen Vakuf, and the Serbian-Orthodox Rmanj Monastery dedicated to Saint Nicholas, a national monument.

More than two decades after the violent siege that shattered the former Yugoslavia, there is still evidence of the fights, like as bullet holes in buildings and a sea of white crosses marking gravesites.

Despite its bleak past, Sarajevo has recently recovered and has a plethora of bustling neighborhoods worth exploring.

When you arrive in the heart of picturesque Banja Luka, it's safe to say you'll think you've arrived in Instagram heaven.

A rainbow-colored umbrella display hangs above the main commercial street Gospodska, a lovely river meanders past, and the complex facade of the great Cathedral of Christ the Saviour will leave you awestruck.

Banja Luka, Bosnia's second largest city after Sarajevo, is an ideal spot to spend a few nights as a base for day travels throughout the country. Banja Luka is famous for its café culture (it's believed that there are 1,000 cafes and bars for just 200-thousand residents), and it's the kind of place where you can sit back, relax, and watch the world go by.

Those who like to walk will find plenty to do, such as touring the medieval Kastel Fortress, which stands strong on the riverfront, entering the Orthodox cathedral to stare at its large, sparkling chandelier, and enjoying the Ottoman grandeur of the Ferhadija Mosque.

If you didn't get your fill of waterfalls in Jajce, make your way to Kravice. The Kravica Waterfalls (also known as Kravice Falls) are located here and are regarded one of the top sights to see in Bosnia.

It's worth spending a whole sun-soaked day at this breathtaking site along the Trebiat river, where a series of nearly two dozen falls plunge 25 meters off a limestone deposit into deep emerald pools.

A thick canopy of moss, figs, and poplars frames the spectacle, which is best seen from one of the neighboring walking routes, taking a boat trip, or even swimming right up to them.

The Bosnia road journey continues at Jajce, where the Pliva Waterfall is located in the city's center.

The 17-metre-high water torrent formed by the junction of two rivers might match Niagara Falls. The phenomenon is best seen from the official viewing platform towards the bottom, but beware: the spray will wet you and your expensive cameras.

Jajce's adjacent Pliva Lakes offer outdoor activity. The tranquil, emerald-toned waterways are great for boat trips, fishing, and swimming, and there are plenty of campgrounds and family-friendly activities.

Check out the medieval wooden watermills, which were used by local farmers.

Is Bosnia And Herzegovina Safe To Travel?

The crime rate is relatively low, and crime against foreigners is uncommon, but be wary of pickpockets on public transportation, as well as in tourist and pedestrian areas in Sarajevo and other towns. Be cautious and secure your personal items, especially your passport.

Is Bosnia Good For Tourists?

Bosnia and Herzegovina is a relatively secure country. Its people are quite kind and eager to assist, and tourists should have no major issues in this country. Small communities are relatively free of serious crimes, although the city, Sarajevo, is not.

Is Bosnia Cheap To Visit?

Bosnia and Herzegovina is a budget travellers paradise. Food, drink and accommodation are all affordable, even in the cities. Free or wild camping is very easy or there are many beautiful and cheap campsites. A meal costs around €4 and a beer is €1 or less in a bar/restaurant.

Bosnia and Herzegovina, a Balkan country, is one of Europe's most visually beautiful corners. Bosnia's tourist attractions are a fascinating combination of East and West, modern and medieval, untouched natural wonders and charming attractions. For all the right reasons, the lovely country of Bosnia provides visitors with a true taste of Europe, and once you go out to explore the amazing Bosnia, you will be enticed to discover more!