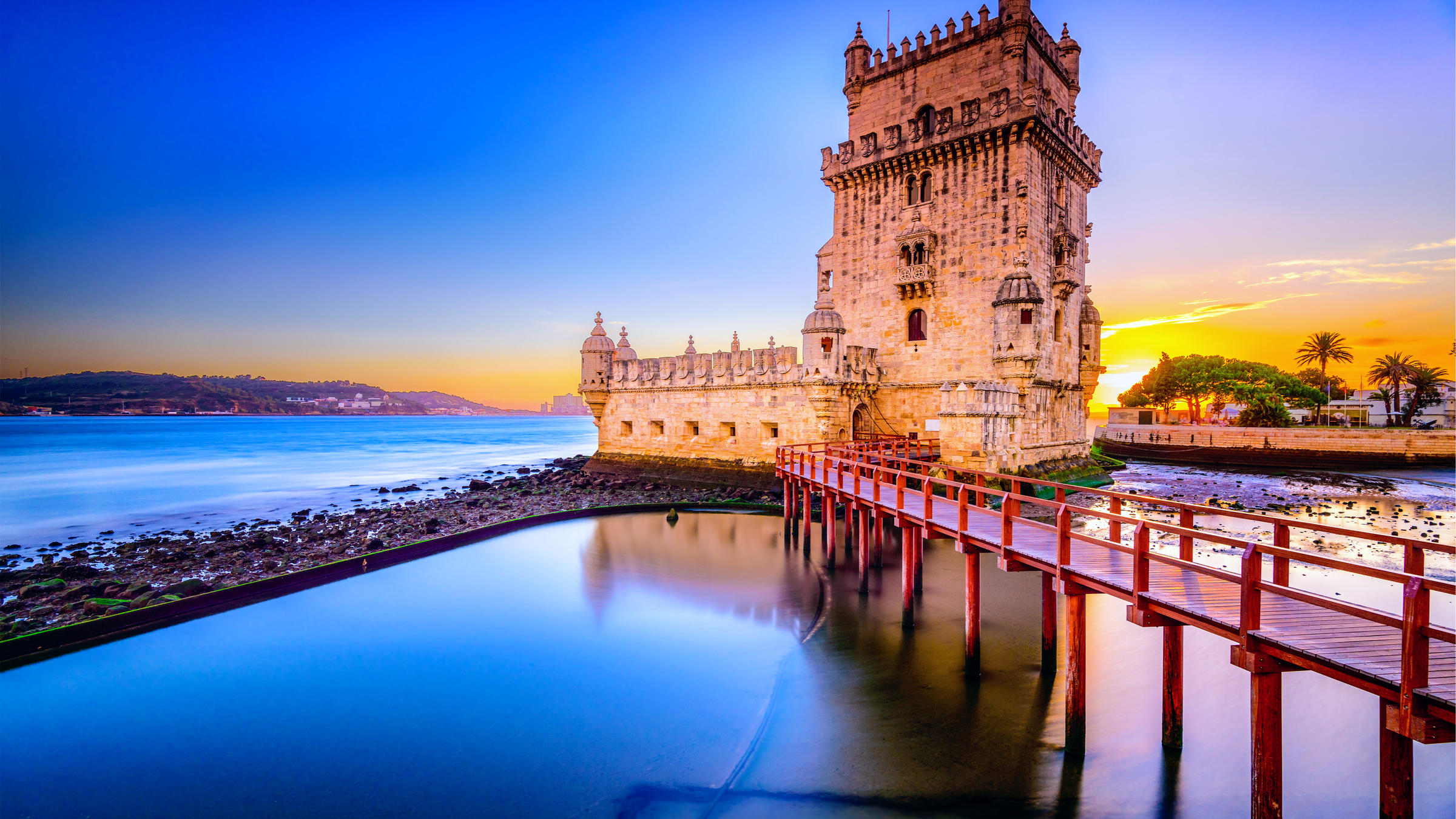 The Belém Tower is a stunning 16th century edifice in florid Manueline architecture, magnificently located to protect Lisbon's harbour and one of the three main attractions of the Belém area - 6 kilometers (3. 7 miles) west of the city center.

The tower is a UNESCO World Heritage Site as well as one of Portugal's Seven Wonders. 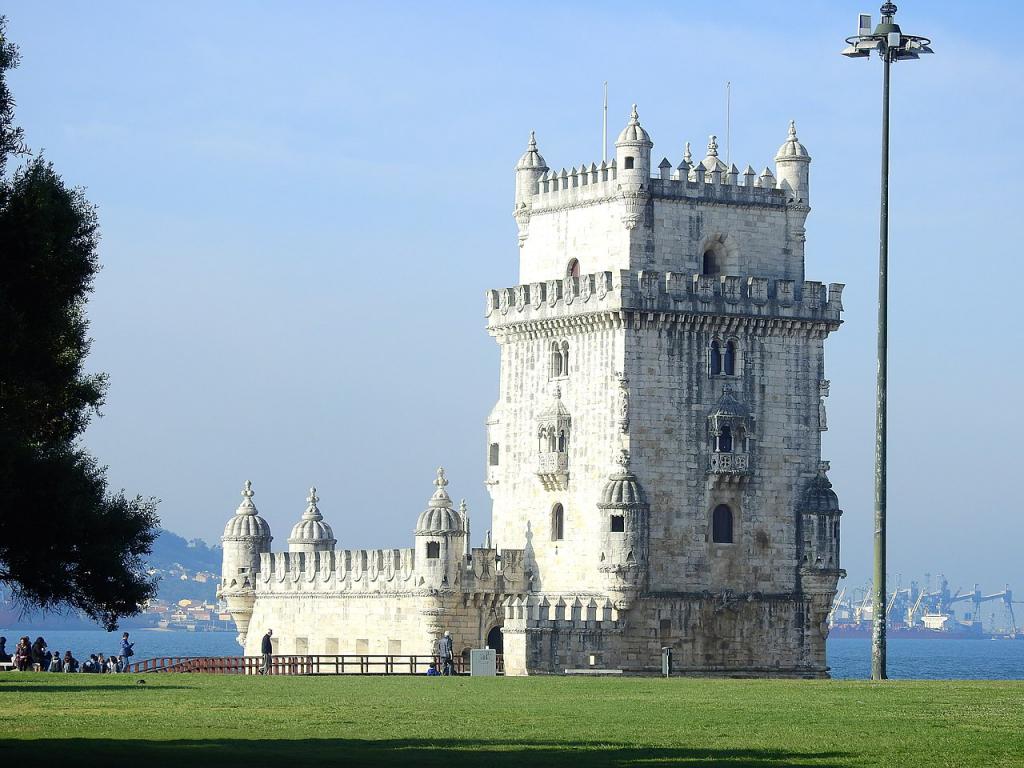 The Belém Tower near Lisbon's Bay

Belém also has the lovely Monument to the Discoveries (below), which won't keep you entertained for long because it's merely a fine, intricate sculpture, and the Jeronimos Monastery (further below), which is significantly more engaging than either of its neighbors. 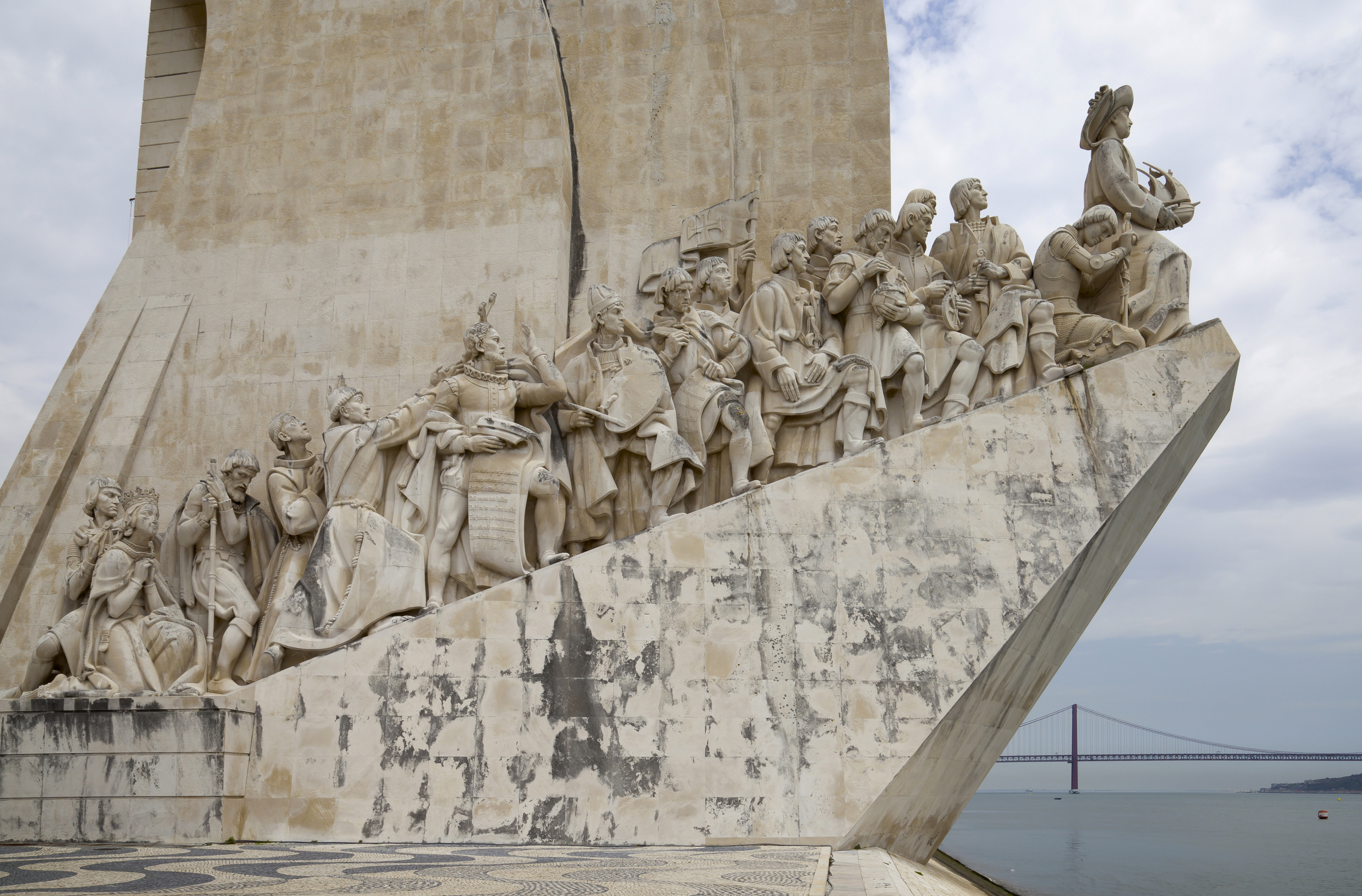 The Discoveries Monument near the bay

The Monumento a los Descubrimientos in Belén, about a kilometer from the Mosteiro dos Jeronimos, commemorates most of Portugal's famous maritime figures.

This includes Vasco da Gama (who discovered the route to India), Ferdinand Magellan (who made the first circumnavigation of the globe), Pedro Cabral (who discovered Brazil), and the people who funded their travels, King Alfonso V and Queen Philippa.

Lovely carving, however except from the beards, we can't tell any difference in their profiles; they may all be Vasco da Gama (who is, incidentally on the other side of the monument).

In his position as Duke of Viseu and King John's fifth child, Henry the Navigator (1394 – 1460) was inspirational in the early days of the Portuguese Empire and encouraged increased maritime trading, the exploration of new routes, and the development of new trading partners and new colonies, particularly in Africa.

With Henry's assistance, slavery, tobacco, and sugar became popular in Portugal, as did gold, another omnipresent evil. 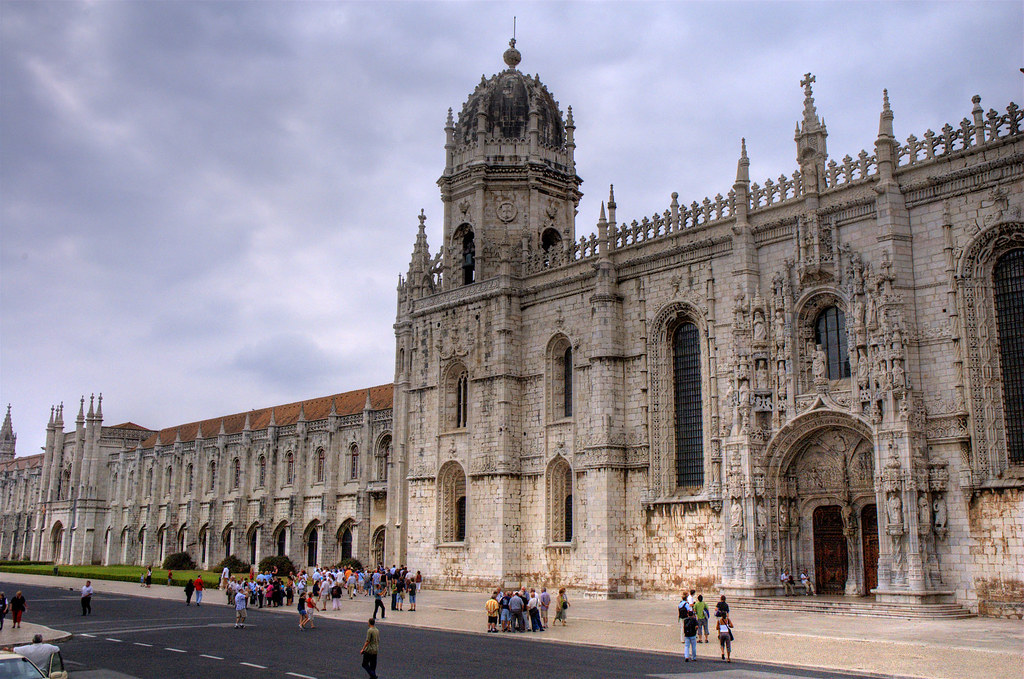 Jerónimos Monastery with some tourists near the architecture

The Mosteiro dos Jerónimosis is a vast, beautiful structure located directly over the Praça do Império from the Monument to the Discoveries.

The monastery was founded by Henry the Navigator to lodge pilgrims, but it was later expanded and improved by King Manuel I's architects to serve as a final resting place for members of the royal family as well as a church for nautical adventurers during the Age of Discovery.

Mosteiro dos Jeronimos was finished at the end of the 16th century and housed monks whose main tasks were to pray for and spiritually guide mariners and the monarch - who paid for it with taxes from Portugal's spice trade.

The intricate Manueline craftsmanship in the cloister is breathtaking and easily visible, in contrast to the equally elaborate south door to the monastery, which is well out of reach. The main chapel, which houses da Gama's body, is simpler but nonetheless stunning.

Jeronimos is a UNESCO World Heritage Site and another of Portugal's Seven Wonders, magnificently decorated with magnificent sculptures - some quite comical, some very strange.

Why Is The Belém Tower Famous?

The Belem Tower (Torre de Belem) was designed by architect Francisco de Arruda and completed in the 16th century, approximately 1515. Its initial function was to safeguard Lisbon from impending attacks along the Tagus River. It also marked the start of the sailors' voyages and their last glimpse of land.

What Does The Belém Tower Represent?

The Tower of Belém commemorates the expedition made by explorer Vasco da Gama in 1497–98, when he opened a maritime trade route from Portugal to India. In honor of Lisbon's patron saint, the Tower is also known as the Tower of Saint Vincent.

Why Is The Torre De Belém Such An Important Monument?

During the Age of Discovery, it served as a starting place for adventurers wishing to travel the world. The Manueline edifice, together with the adjoining Monastery of Jeronimos, is now a UNESCO World Heritage Site and stands as a tribute to that era.

Belem Tower is a Gothic church. It was constructed between 1450 and 1477 with funds provided by King Afonso V of Portugal. It was created to celebrate the 500th anniversary of Portuguese explorer Vasco da Gama's discovery of what would eventually be known as the New World. The tower is one of the most important architectural structures in Portugal.