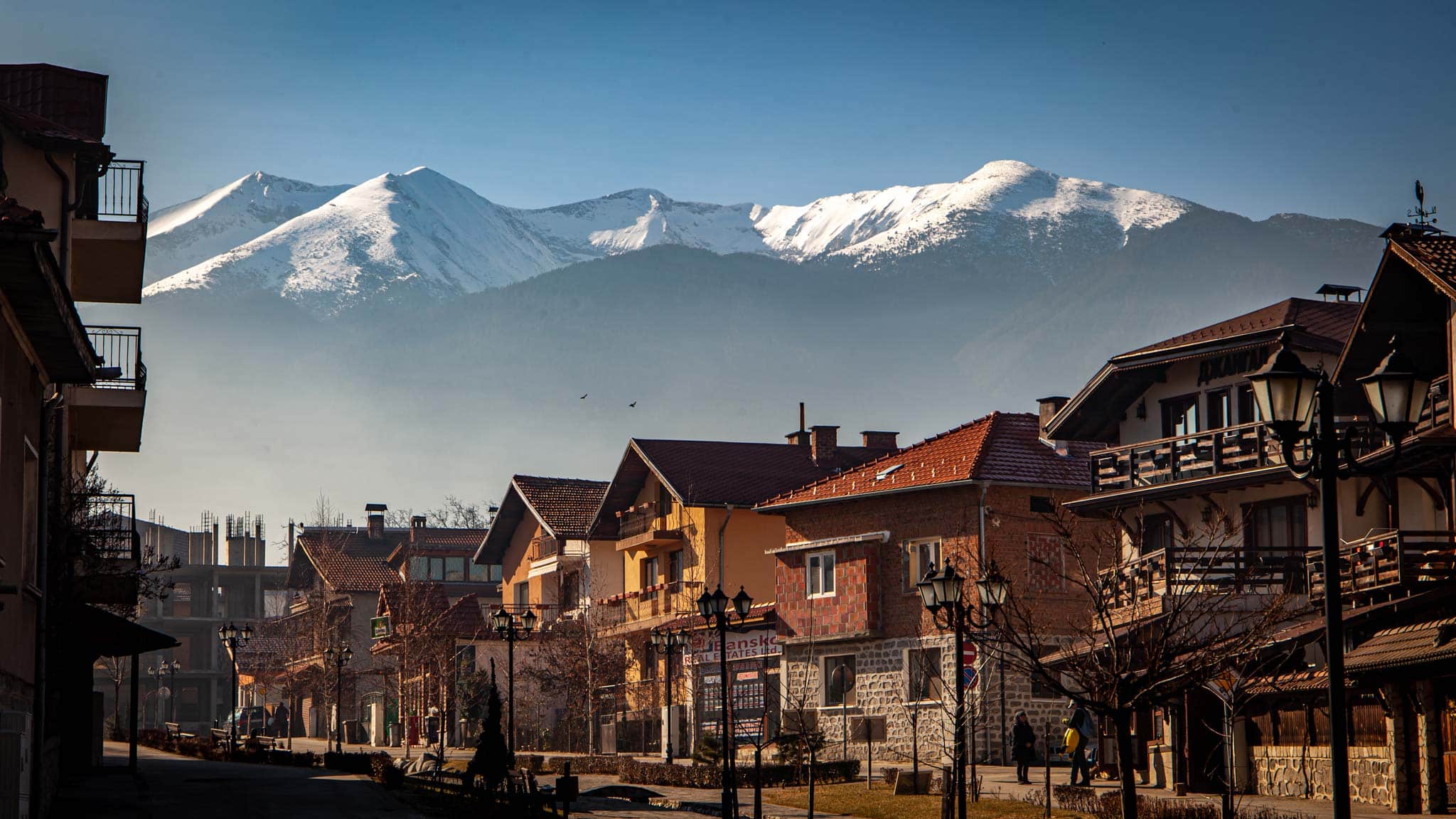 Bansko is a town in southern Bulgaria located 927 meters above sea level in the Pirin Mountains, and it is the most popular ski resort in the Balkans.

The area is quickly becoming a well-known international winter tourism destination, taking advantage of not just the snow but also the numerous lakes, old pine woodlands, and thermal springs.

Bansko's proportion of European winter tourism is growing, and it is rapidly competing with renowned resorts in both France and Switzerland as quality improves but costs stay significantly cheaper.

There are various legends about the founding of Bansko. According to one version, Bansko was built by individuals who resided in Dobarsko, a settlement in Rila that was founded by Tsar Samuil's blinded army. 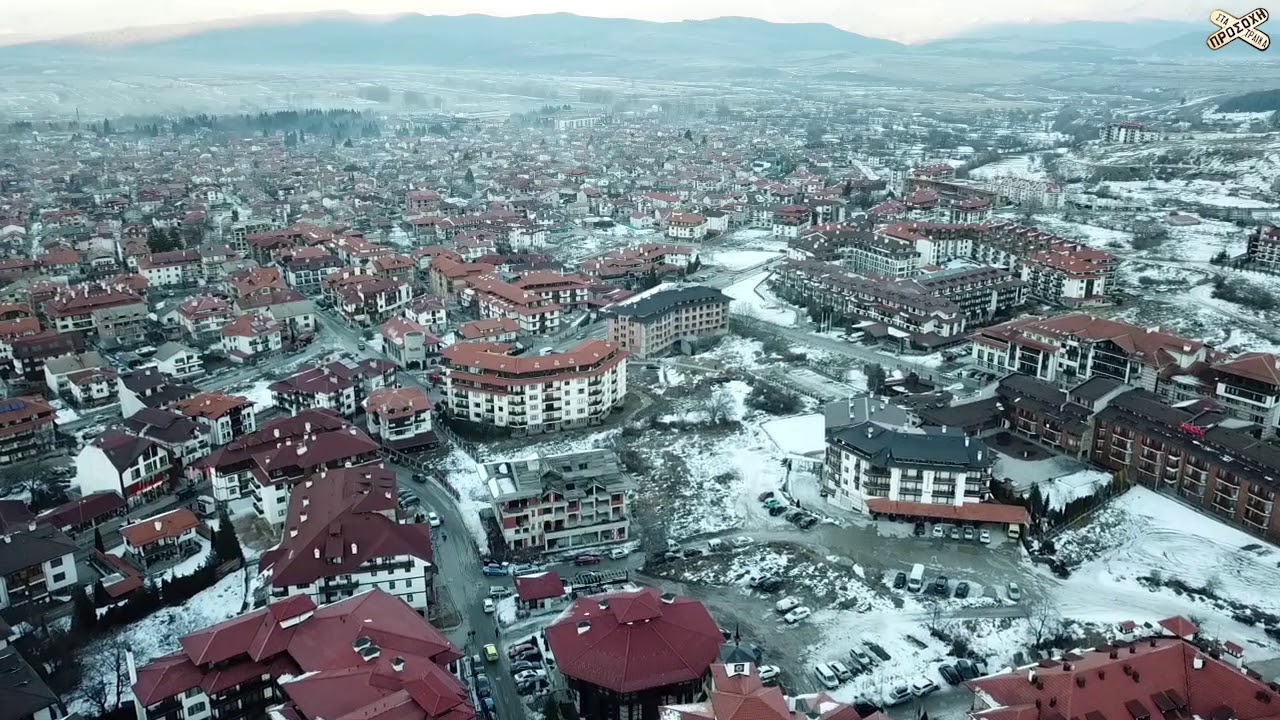 An aerial view of a town in Bansko

Another tale holds that Bansko was built by an Italian painter named Ciociolino, which explains the presence of the name Chucholin in Bansko.

According to another legend, the Peruns, a Slavic tribe who lived in Pirin and worshiped Perun, created the settlement, which eventually became a town.

This tradition is supported by a multitude of anthropological documents, legends, prayers, and oratories.

Archeological evidence of Bansko and the Razlog Valley's inhabitants dates back to the early Roman Empire.

On the outskirts of town, there are various habitation structures dating back to 100 BC. However, there is no agreement or viable idea as to who these individuals were.

Bansko was conquered to Bulgaria during the reign of Khan Krum, presumably around 811 AD, and passed back and forth between Byzantines and Bulgarians for the next few centuries before falling under Ottoman control in the 14th century.

Bansko is a town in southern Bulgaria that sits at the foot of the Pirin Mountains, 1200 meters above sea level. 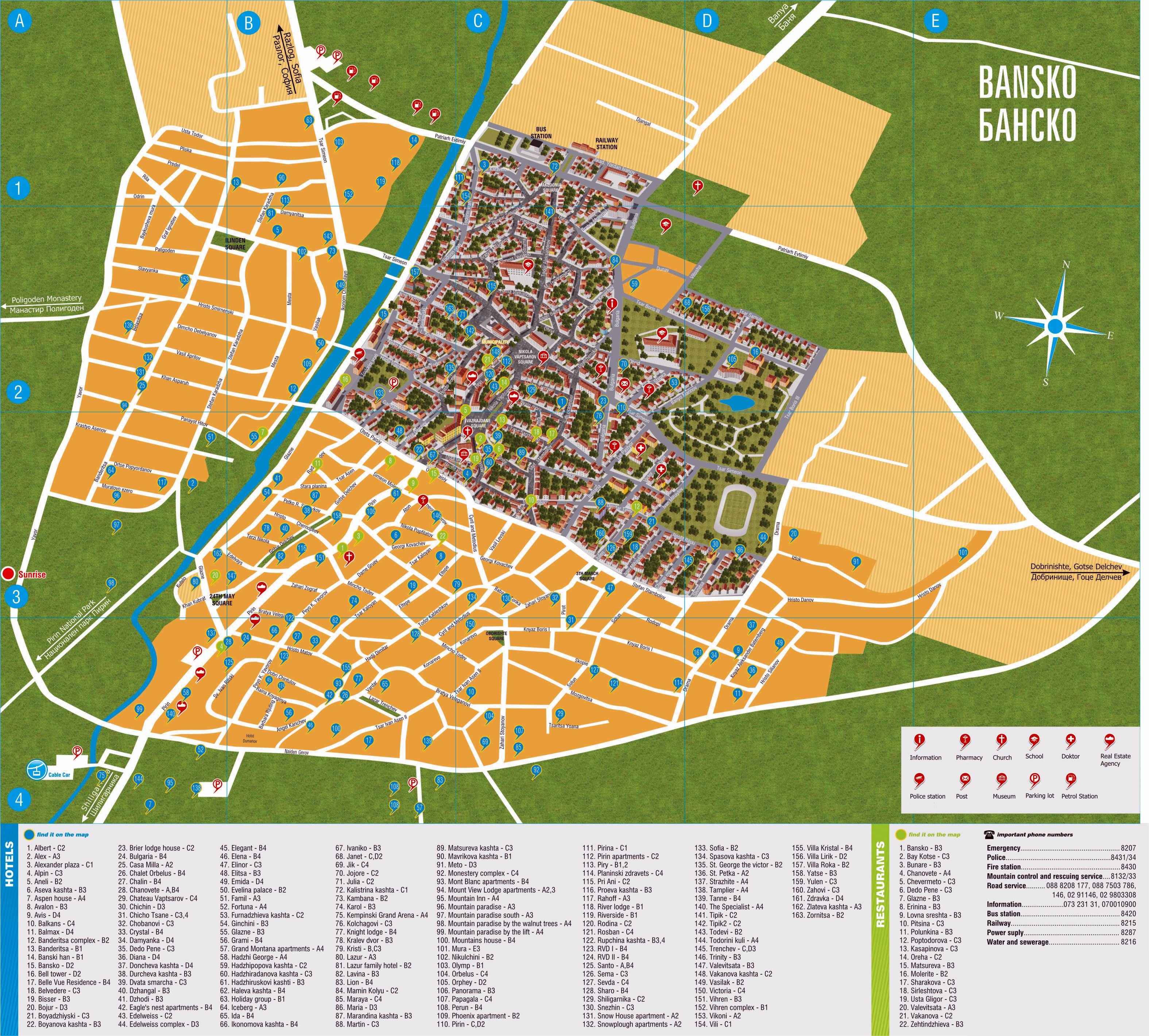 A detailed map of Bansko

Bansko ski resort is Bulgaria's best winter resort, with the longest ski routes and the most cultural history.

Bansko is located in south-western Bulgaria, at the foot of the Pirin mountain, 160 kilometers from Sofia.

The resort's infrastructure and ski and snowboard conditions are superb. Many hotels of varied levels and rates are accessible for online booking.

In terms of après-ski, the resort has hundreds of pubs and traditional restaurants known as'mehana.' Bansko mountain resort is a great alternative for your Bulgarian ski and snowboard vacation.

While resorts in Italy and France close their doors in April, Bansko's official ski season begins in mid-December and finishes in mid-May, providing you an extra month of snow. 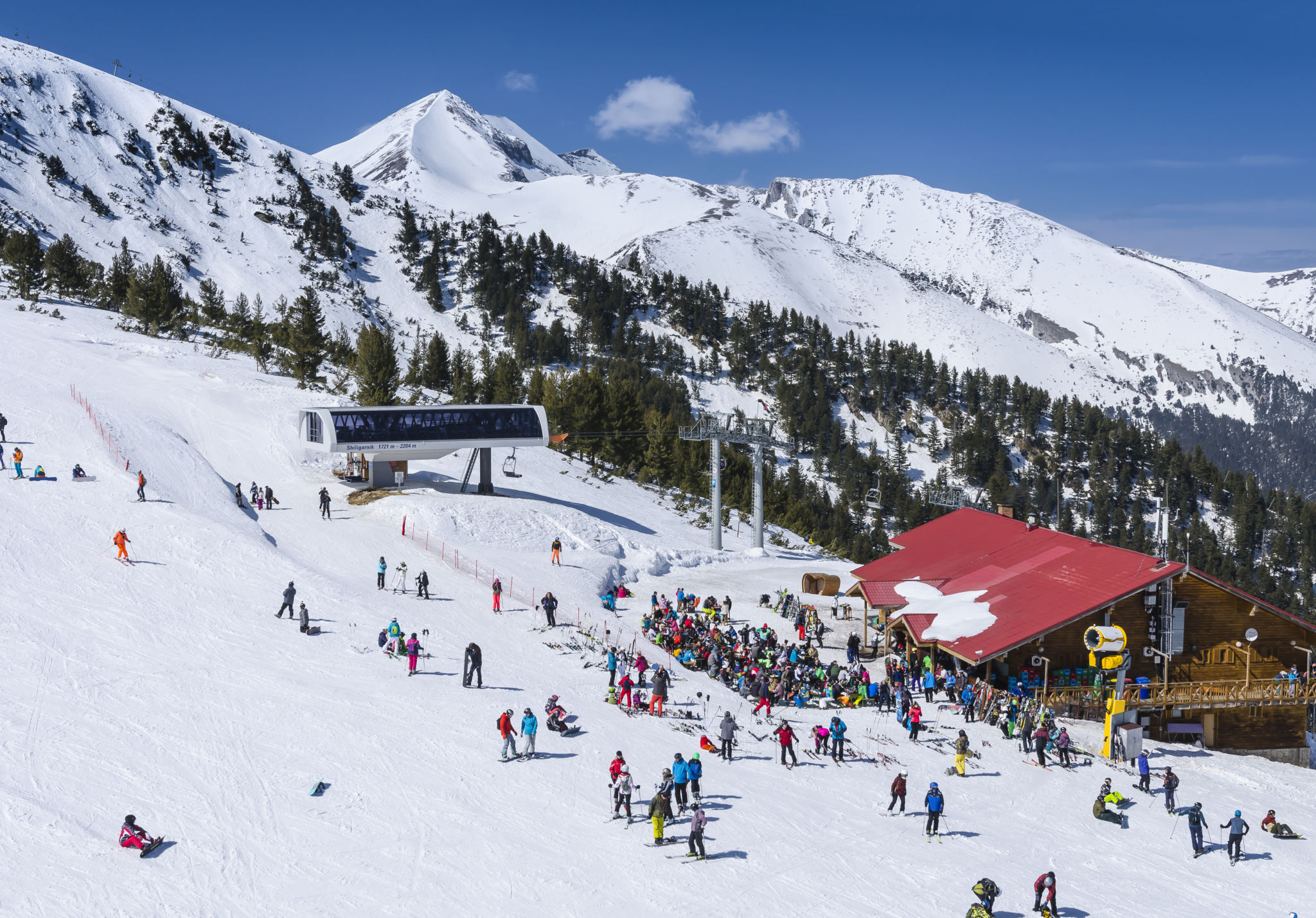 Some tourists and skiers in Bansko ski resort

The climate is characterized by hot summers and long, harsh winters, with heavy snowfalls occurring throughout the nation from December to mid-March, particularly in mountainous places such as Bansko.

From November through February, temperatures in Bansko range from 9 to - 16 degrees Celsius.

Aside from world-class skiing and snowboarding, there are a variety of other winter activities to enjoy here. Try ice skating at the huge ring near the ski lifts, or get your adrenaline pumping with activities like ski dooing, mountain biking, and walking snow tours.

Bansko Bulgaria Things To Do

Bansko is the most popular ski resort in Bulgaria. It's nestled between three mountain ranges, with the ski area at an elevation of 2000–2600 meters. 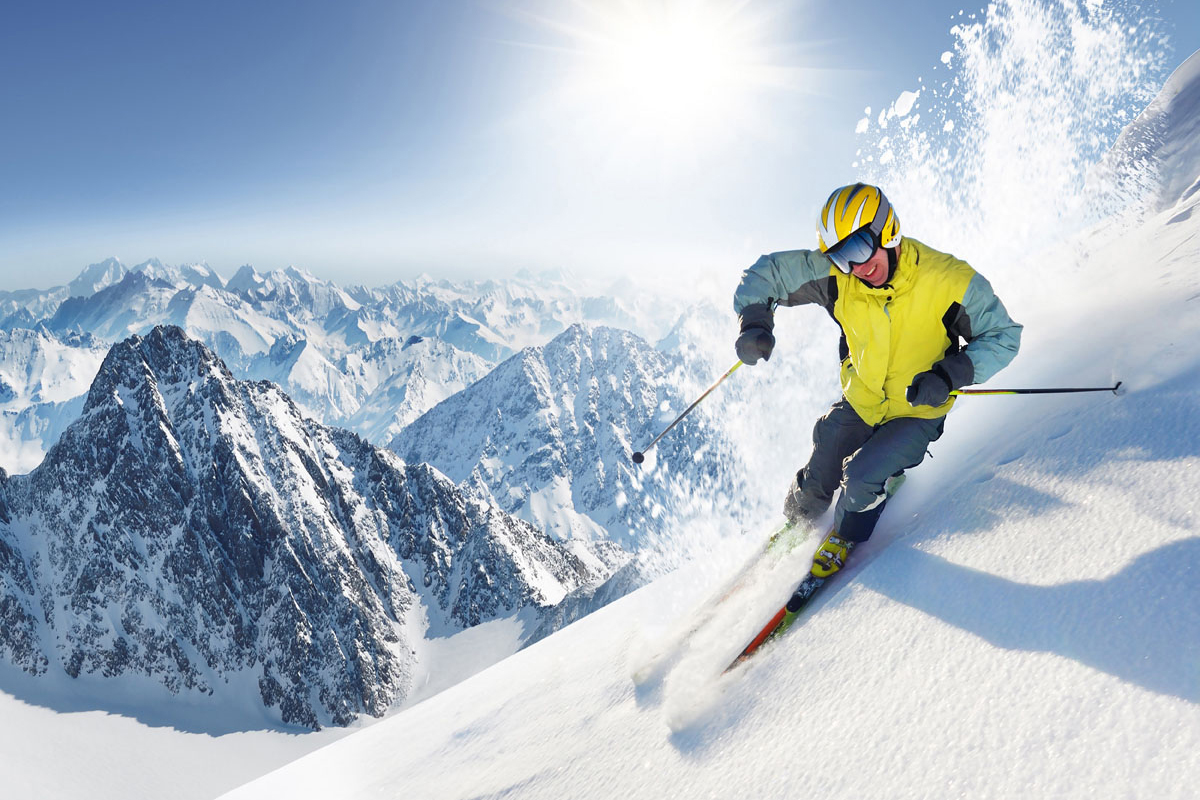 This means it has consistent snow cover from December to March (and if not, most of the pistes are covered by snow cannons), as well as some beautiful views from the top of the slopes.

Bansko's ski area includes over 70 kilometers of slopes. It's not a large area by Alpine standards, but it has a fair mix of levels, with eight blue runs, 11 red runs, and two black runs.

The piste map displays a red run on the right, but the Tzarna Mogila lift linking it has been out of use for years, therefore the ski area is centered on Bunderishka and Shiligarnika.

Bansko is surrounded by natural thermal springs, which are ideal for soaking away any ski aches and pains or simply enjoying a quiet afternoon. 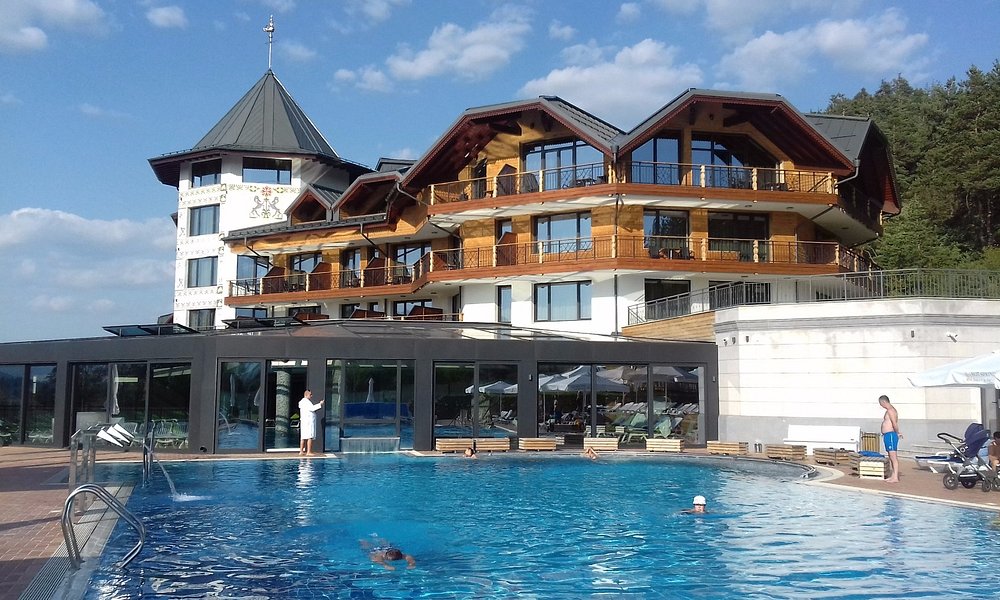 Some tourists swimming in a Hot Spring Resort in Bansko

Banya, a 15-minute drive from Bansko, is one of the region's spa tourism hubs, having a mix of public pools and hotels catering to day visitors.

Water temperatures range from 37°C to 57°C, and there are frequently excellent vistas of the snowy mountains visible through the clouds of steam.

You don't have to travel far from the lift station on the outskirts of town, with its apartment buildings and tourist bars, to feel transported back in time. 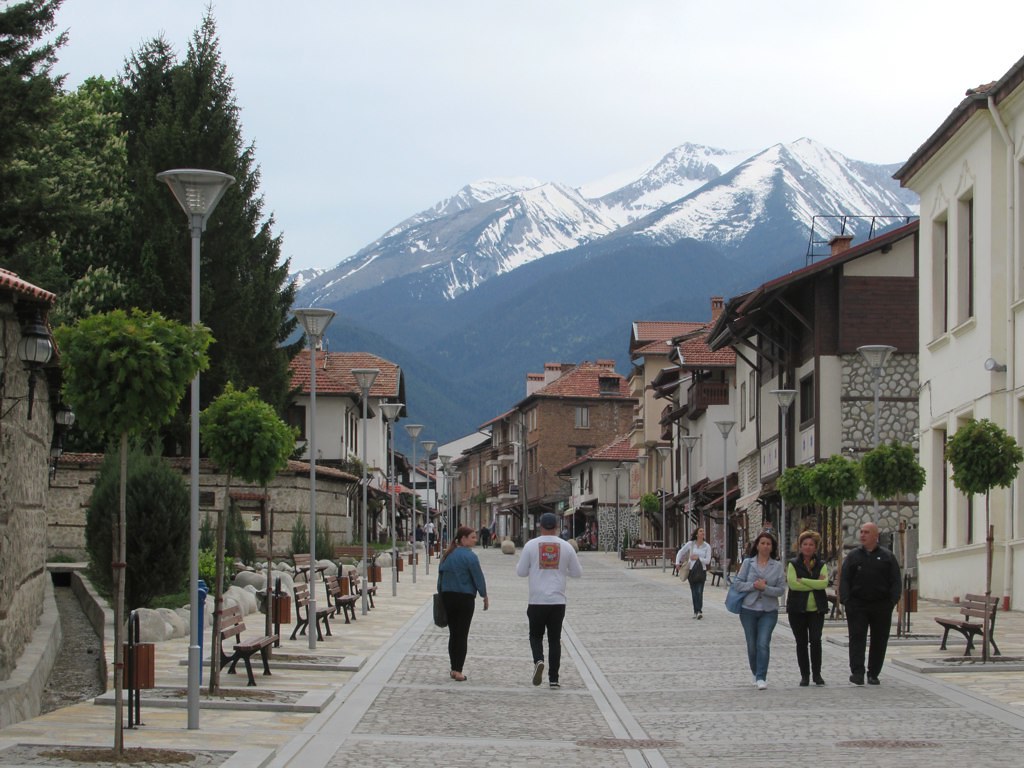 Following Pirin Street from the gondola end of town for around 15 minutes will bring you to Bansko's old town, a calm tangle of cobbled lanes and historic stone buildings.

It's the kind of spot where you can get lost and see what you find. Look for Holy Trinity Church, which has a soaring bell tower, streetside craft vendors, quaint restaurants, and big statues.

You can take a two-hour guided walking tour* to learn more about Bansko's history and architecture. There are also a few museums, such as the Velyanov Home, a classic Bulgarian stone house with 19th-century wall paintings and carved wooden ceilings.

Also, the house where Bulgarian poet Nikola Vaptsarov grew up has been reconstructed to look just how it did in the 1910s, complete with his writings on display.

Bansko features rapid, modern lifts and 18 pistes across a 75-kilometer area. There are blue and red runs, as well as a couple of black runs. Bansko's slopes are positioned at 2000–2500 meters, giving it Bulgaria's longest ski season and excellent snow record.

Is Bansko A Good Place To Ski?

Bansko is rightfully Bulgaria's top resort, and it offers outstanding value for money, especially with the recent investment in the ski region and town. Bansko has grown from strength to strength since the installation of the access gondola in 2003.

Bansko is perilous. I've never seen so many mishaps. 2 hours, including lift lines Skiing with a 9-year-old advanced skier was a nightmare since he was afraid of crowds and fools skiing too fast.

Bansko, Bulgaria, is one of Europe's best-kept secrets when it comes to skiing. Bansko, on the other hand, merits a visit throughout the year and should undoubtedly be included in any Bulgaria itinerary.